As the city plans for a $16.1 million “Imagination Center“ combining a library, park pavilion and services at Reindahl Park, the Parks Division is launching a public process to update the decade-old master plan for the sprawling Far East Side Park.

The 91-acre park, 1818 Portage Road, has continued to evolve since the current master plan was approved in March 2013, including a cricket field, splash park, routing a sewer line through a stand of mature trees, and improvements to a storage barn and tennis courts.

It also held a sprawling homeless encampment until the city created other shelter options and closed the encampment in November.

Now, the city is looking to replace an existing playground with a fully accessible one, and planning for the 16,000-square-foot Imagination Center, which would replace a dated and underused shelter and require the removal of more mature trees.

Some, however, question how thoroughly the city explored alternate locations for the Imagination Center, including sites outside the park to allow a mixed-use facility with housing and commercial space, and the placement of a sewer line through the stand of trees at the park in 2018.

The coming process will evaluate the Imagination Center and ask park users about their vision for the future of the park, Parks Division officials said. It will include a public meeting, likely to be scheduled for the fall, a survey and Park Commission review.

“The master plan update will provide guidance to parks staff for the next 20 to 30 years,” Parks Superintendent Eric Knepp said.

The much-used park already offers soccer, softball and cricket fields, basketball and tennis courts, the splash park, community gardens and the dated shelter, which doesn’t function well for civic gathering space and has a history of attracting negative behaviors.

The city has long identified challenges and needs in the areas around the park. Major thoroughfares intersect the area. Commercial and retail development in the area was largely developed as regional, not neighborhood shopping. Relatively cheap hotels have become a center for drug use and prostitution.

The 2013 master plan was almost exclusively related to construction of the splash park in 2014 near the existing shelter. The splash park includes a building originally intended for concessions but hasn’t been used for that purpose. The Parks Division is seeking bids to renovate the structure to include restrooms instead of concessions space.

The Parks Division also worked with cricket players to invest in a field and practice pitch, and staff support a long-term home for cricket in the location. The current master plan also didn’t envision the need to remove an old restroom building from a triangle parcel on the south end of the park due to its condition.

The Parks Division initiated a master plan update in 2019, but the effort stalled amid the COVID-19 pandemic.

The big looming change unforeseen in the current master plan is the Imagination Center.

The center will feature library collections, meeting and classroom spaces, an indoor pavilion and other amenities in the park near the intersection of East Washington Avenue and Portage Road and would cost an estimated $1.72 million annually to operate.

It will serve roughly 26,000 residents, with a higher percentage of immigrants, youth and people of color than most other areas of Madison, officials said. Two schools in the area — Hawthorne and Sandburg elementary — have high percentages of English language learners, low-income families and students of color, they said.

Under current plans, the center would require removal of the existing shelter and perhaps more than a dozen mature trees, and would be located next to an existing parking lot.

The library, which did public outreach in anticipation of developing new facilities on the East and Far East sides, sought to build a new library at the park for multiple reasons, library staff said in a response to written questions from the State Journal. They include shared costs with the Parks Division, the potential to increase use of a city property, more programming with the use of outdoor space, access to technology for the Parks Division, and no property acquisition costs, they said.

The location within the park itself makes sense for several reasons, staff said. It’s next to the existing parking lot, meaning more land won’t be paved for parking and roads; it works well with the locations of the splash park and playground; and it allows for better use of greenspace behind the facility, they said.

Jon Becker, who lives next to the park and has advocated for preservation of trees and the natural environment there, wants the city to delay approval of a master plan because the public hasn’t been shown alternative sites for the Imagination Center outside the park, nor fiscal comparisons of what makes most sense.

There have been no scenarios for a mixed-use development with housing and commercial space, such as with the city’s newer library branches: the East Side’s Pinney, 516 Cottage Grove Road, and the West Side’s Sequoia, 4030 Tokay Blvd., Becker said. It means no opportunity to create needed housing and the loss of considerable tax revenue over time, he said.

Further, the location in the park would require cutting 15 to 17 mature trees in addition to 40 to 50 removed to create the sewer line in 2018, Becker said.

A small group co-led by Becker, Friends of Reindahl Environs, offered 29 recommendations for the park when the Parks Division first began considering a master plan update in 2019. They include dedicating at least 50% of the park for nature, more plantings, berms and trees, reducing impervious surfaces, expanding prairie and meadows and redesigning paths and trails.

Library and Parks Division officials said other sites were considered for the Imagination Center and that designers have tried to minimize the removal of trees.

In the library’s Eastside Strategic Plan of 2016, community priorities helped shape scoring criteria for picking a site, library staff said. The library used the criteria to assess four potential locations and Reindahl had the highest score, they said.

Becker said the city identified four general areas, with one at East Towne showing the highest socio-economic impact, and changed the matrix to downgrade environmental impacts of construction.

It’s a big task to develop viable alternative facility plans at multiple sites with cost estimates and floor plans, library staff said. Also, the facility isn’t just a library in a park, but an opportunity for unique programming opportunities for all ages, they said.

Any decision to relocate beyond altering the building’s layout or position next to the parking lot would require a new planning process and set the project back years, they said.

“Yes, there will be loss of trees from the project,” Knepp said. “However, extensive studies by various agencies have determined that the shelter site is the best site in the park. The exact number of trees that would be removed for the project is somewhat indeterminate and 17 is on the high end. A number of trees in this area have been impacted by storms and old age over the past couple of years.”

Becker, noting PFAS have been detected at nearby Well 15 and in borings near the shelter, said there could also be PFAS contamination at the site that could require costly mitigation.

The master planning process will provide the public an opportunity to comment on the Imagination Center’s location and orientation within the park, Knepp said.

Ald. Syed Abbas, 12th District, who represents the site, could not be reached.

A loss of trees

Since the last master plan was adopted the most significant change to park amenities has been the path added as part of the sewer project, Knepp said.

The project was needed to install a relief sewer in order to maintain adequate capacity in our collection system, sewerage district spokesperson Amanda Wegner said. The line serves Madison’s East Side, Waunakee, DeForest and Dane, a growing part of the service area, she said.

“The district used a public selection process with three alternative routes — Portage Road, Stoughton Road and the park,” she said. “We held three public meetings, and the Reindahl Park route was selected with public input based on a number of factors.

“Once the public selected the Reindahl Park route, we worked closely with the city Parks Division, which provided direction on the route through the Reindahl to accommodate existing and future amenities in the park,” she said.

The Park Commission approved the route through the park, Knepp said.

The district then built the path as an amenity for the park, Wegner said. “It is made of porous pavement at the city’s request,” she said. “This path also allows district crews access to our manholes for maintenance.”

Becker contends there were better options for the sewer line that could have saved about 40 trees, such as routing to the north of the large stand of trees.

The park’s tree canopy has suffered other recent losses.

During the homeless encampment, some trees were wounded by a hatchet-type device, others were harmed by fires, and some areas suffered significant impacts on root zones due to compaction, Knepp said. The Parks Division also removed three mature trees near the existing shelter.

“The Parks Division’s job is to consider the entire park system, the needs of our city residents, and attempt to balance what we provide in our parks,” Knepp said. “Ultimately, the Board of Park Commissioners decides on whether a plan is striking that appropriate balance.”

The proposed Reindahl Imagination Center would include a library, community center, and presence of other agencies at the 91-acre park near the intersection of East Washington Avenue and Portage Road.

After merging with another congregation last summer, Zion Evangelical Lutheran Church sold its 54-year-old sanctuary to a developer who plans to build a 32-unit apartment complex on the site. 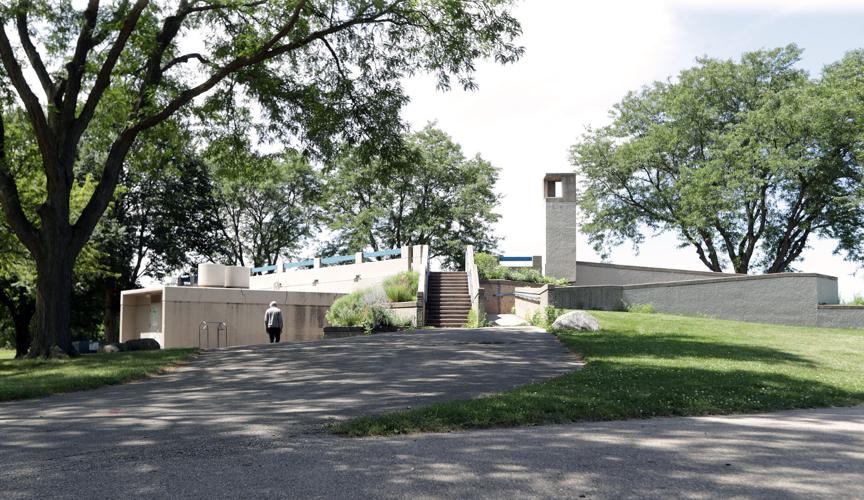 Under current plans, the dated shelter at Reindahl Park would be removed for the $16.1 million Imagination Center featuring a new library and park shelter. The Parks Division is launching a master plan update for the 91-acre park on the Far East Side. 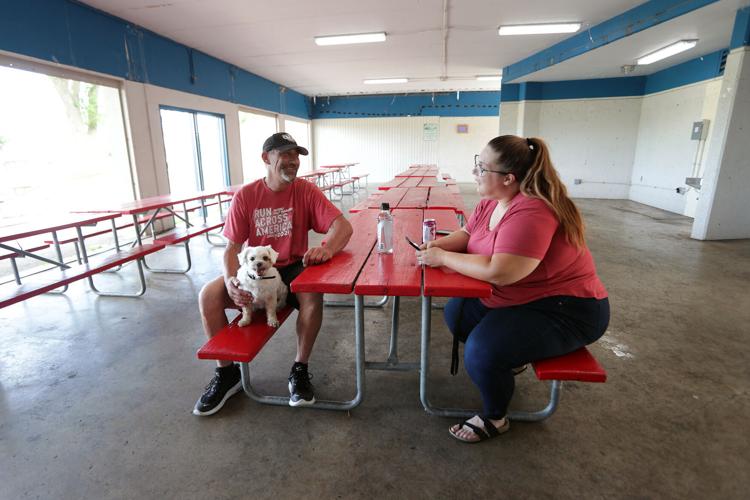 Becky Fitzgerald, right, talks with Kevin Callaway and his dog Rainbow while enjoying the afternoon at the Reindahl Park shelter. 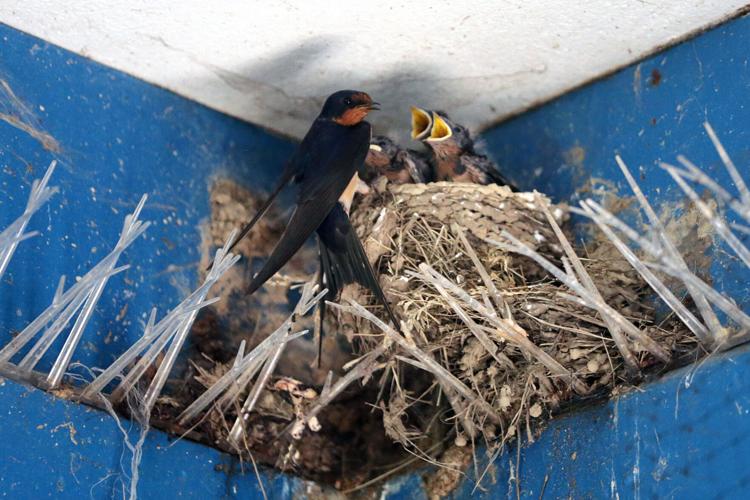 A barn swallow feeds her nestlings at the Reindahl Park shelter. 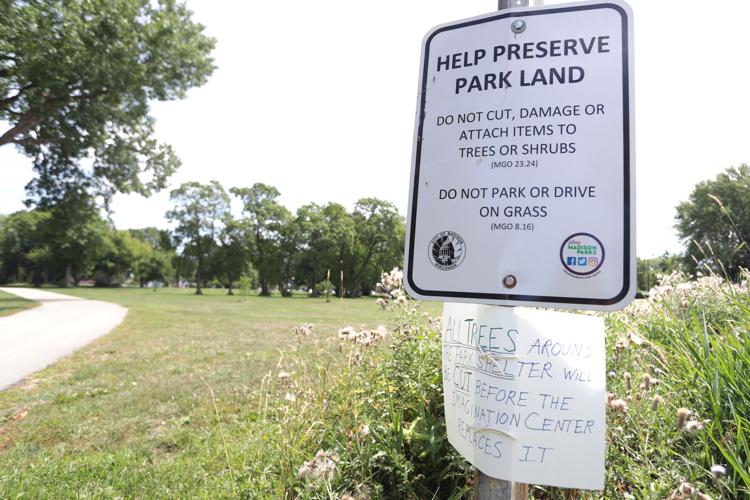 A handwritten sign near the bike path entering Reindahl Park states: "All trees around the park shelter will be cut before the Imagination Center replaces it." 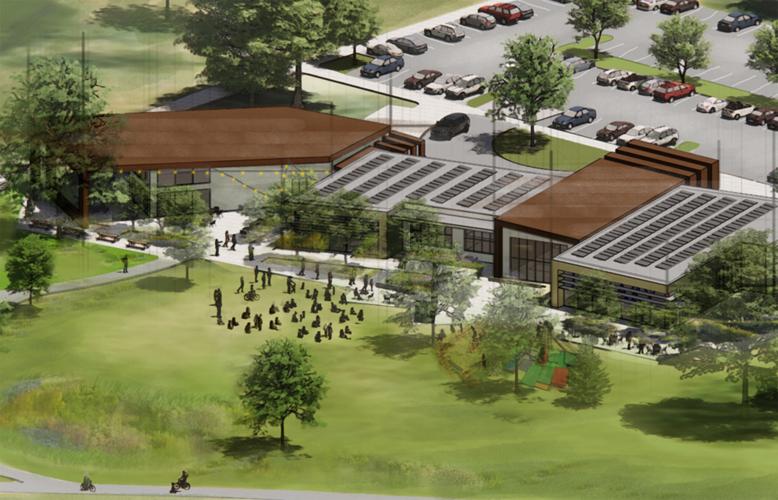 A preliminary concept of the $16.1 million Imagination Center with new library and park pavilion to be built at Reindahl Park. The city plans to begin construction on the project in early 2023.