The Wisconsin document, signed by 10 Republicans who convened in the state Capitol on Dec. 14, 2020, was filled out on the same day the Democratic slate of Wisconsin electors met in the same building to deliver the state’s 10 electoral votes to Biden. The meeting of Republicans occurred after the Wisconsin Supreme Court ruled Biden had won the election.

“What is it?” Hodgson replied.

“Alternate slate of electors for MI and WI because archivist didn’t receive them,” Riley wrote back.

Hodgson responded: “Do not give that to him.”

The text messages were produced Tuesday by the U.S. House Select Committee investigating the Jan. 6, 2021, riot at the U.S. Capitol.

“The senator had no involvement in the creation of an alternate slate of electors and had no foreknowledge that it was going to be delivered to our office,” Johnson spokesperson Alexa Henning said in a statement after the revelation. “This was a staff to staff exchange. His new Chief of Staff contacted the Vice President’s office. The Vice President’s office said not to give it to him and we did not. There was no further action taken.”

Later on Tuesday, Johnson told a CNN reporter, “I was aware that we got this package and that somebody wanted us to deliver it to the vice president. We reached out. They didn’t want it, we didn’t deliver it.”

In the interview, Johnson said he didn’t know who delivered the documents to his office.

In the run-up to the vote certification on Jan. 6, 2021, Johnson indicated he would object to the certification of electors in key states Biden won. But he changed course after the assault on the Capitol and voted to certify key swing states whose results Republicans were trying to discredit.

He later told a liberal activist in comments that were secretly recorded, “there’s nothing obviously skewed about the results” of the 2020 presidential election. Even so, the senator has consistently supported former Supreme Court Justice Michael Gableman’s effort to review the 2020 election.

“Wisconsin, we deserve better,” the Democratic Party of Wisconsin stated on Twitter.

Two days before the text exchange between Johnson’s office and that of the vice president, according to another text the House committee disclosed Tuesday, Wisconsin Republican Party executive director Mark Jefferson texted an unidentified person saying, “Freaking trump idiots want someone to fly original elector papers to the senate President. They’re gonna call one of us to tell us just what the hell is going on.”

Wisconsin Republican Party spokesperson Anna Kelly did not respond to a request for comment.

Republicans have said the meeting to sign the document was to preserve their legal options amid litigation surrounding the election. Trump attorney Kenneth Chesebro sent a memo to fellow Trump attorney and former Dane County Circuit Court Judge James Troupis on Nov. 18, 2020, detailing the Republicans’ eventual plan to pose as electors.

One of those fake electors, former Wisconsin Republican Party chair Andrew Hitt, told the U.S. House committee in a video presented Tuesday that he was told the fake Trump electors would only count if a court ruled in the former president’s favor.

Official-looking certificates were submitted by Republicans claiming to be electors in Wisconsin and six other states: Arizona, Georgia, Michigan, Nevada, New Mexico and Pennsylvania.

In a Dec. 9, 2020, memo obtained by The Washington Post and revealed this week, Chesebro called the plan to sign official-looking documents in Wisconsin and Arizona “unproblematic” but said the plan was “slightly problematic” in Michigan, “somewhat dicey” in Georgia and Pennsylvania and “extremely problematic” in Nevada — all states where local laws made producing such documents difficult.

The article didn’t explain why Wisconsin was unproblematic, but explained that the slight problem in Michigan was state law requiring the electors to convene at a specific time in the Senate chambers, which is where the Democratic electors were already convening. Wisconsin law specifies a time, but not a room in the state Capitol where the meeting should be held.

Chesebro, Troupis and the 10 Republicans who signed the paperwork are now subject to a lawsuit in Wisconsin — the first of its kind nationwide — alleging they played a role in the Jan. 6, 2021, insurrection.

The lawsuit seeks more than $2.4 million in damages, including $2,000 in fines for the Republicans and their attorneys, and up to $200,000 in punitive damages for each plaintiff. Plaintiffs in the case include lawfully elected Wisconsin electors Khary Penebaker and Mary Arnold, as well as Bonnie Joseph, who is listed in court documents as someone who “objects to Defendants’ unlawful interference in Wisconsin’s participation in the Electoral College.”

Law Forward also filed a complaint with the Milwaukee County District Attorney’s Office and another with the Office of Lawyer Regulation — the agency that handles complaints against lawyers in Wisconsin — against Hitt. The U.S. Department of Justice is also looking into the matter.

False imprisonment charges have been dismissed against a northeastern Wisconsin school superintendent accused of illegally detaining some students in a high school bathroom during searches for vaping devices.

That happened just an hour before a Pence aide denied Johnson chief of staff Sean Riley's attempt to pass those documents, which falsely stated Trump won Michigan and Wisconsin in November 2020, to the vice president.

The ongoing investigation into the events that led to the Jan. 6, 2021 attack on the U.S. Capitol — including the slate of Republicans asserting to be Wisconsin’s electors — was also a talking point at this weekend’s convention.

Johnson's comment came as the U.S. House committee investigating the Jan. 6, 2021, insurrection reveals a wide-ranging scheme to overturn the 2020 presidential election, which appears to involve the attorney Johnson referred to on Friday. 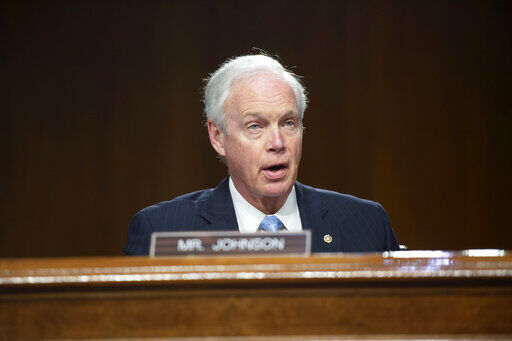