Former President Donald Trump visited southeastern Wisconsin on Friday ostensibly to stump for Tim Michels, his chosen candidate in Tuesday’s GOP gubernatorial primary, but spent much of his speech focusing on his baseless claims of widespread fraud in the 2020 presidential election.

Trump traveled to the Republican stronghold of Waukesha County to support Michels, the millionaire co-owner of Brownsville-based construction company Michels Corp., who is in a close race with Rebecca Kleefisch heading into Tuesday’s primary.

Kleefisch has been endorsed by Mike Pence — once a close Trump ally who, like the former president, is mulling his own 2024 prospects — in the latest proxy battle between Trump and his former vice president.

After arriving about 90 minutes late due to weather delays, Trump spent much of his speech touting the accomplishments of his term as president and taking aim at President Joe Biden and Democratic Gov. Tony Evers, and promoting the lie that the 2020 election was “rigged and stolen.”

“I ran twice, I won twice ... now we may just have to do it again and bring our country back,” Trump said, hinting to his prospects of a 2024 presidential campaign.

About 30 minutes into his speech, Trump turned the topic to Michels, who he touted as a businessman, veteran and “America First patriot.”

Trump also took aim at Kleefisch, describing her as “the handpicked candidate of the failed establishment, the ‘RINOs.’” “RINO” is an acronym for “Republican in name only,” a derogatory term for party members deemed insufficiently loyal.

“Kleefisch does not have what it takes to beat Tony Evers,” Trump said. “Tony Evers is close to incompetent, but he’s going to win if he runs against Rebecca.”

The winner of the Aug. 9 primary will go on to face Evers, who is seeking a second term, on Nov. 8 in what is expected to be one of the most hotly contested gubernatorial races in the country. State Rep. Timothy Ramthun, R-Campbellsport, and business owner Adam Fischer are also running in the GOP primary.

Michels focused much of his roughly 20-minute speech on Biden and Evers, criticizing the latter for how he responded to protests that turned violent in Kenosha following the shooting of a Black man, Jacob Blake, by a white Kenosha police officer.

“Kenosha was burning and where was he? He showed up days later,” Michels said. “I’m the kind of guy who would be there on the first evening, in the first hour, providing leadership. It’s what I’ve done my whole life.”

Michels said his first action if elected governor would be to ensure “election integrity” by banning private grants for elections, requiring a photo ID to request an absentee ballot and eliminating the bipartisan Wisconsin Elections Commission.

While Kleefisch and Ramthun have called for dismantling the six-member commission, which was created by Legislative Republicans six years ago, Michels wants to replace it with what he’s called “WEC 2.0,” an agency made up of appointees from each of the state’s eight congressional districts. Michels has not provided specifics on who would appoint the new agency’s members.

Michels also reiterated campaign talking points including a call for universal school choice and more funding for police. He did not mention decertification of the 2020 presidential election, a legal and constitutional impossibility.

Michels earlier this week said “everything will be on the table” when asked if he would consider decertifying the election, marking a shift from his comments a week earlier that decertification was “not a priority.”

How to vote early

While Michels didn’t mention his primary challenger Kleefisch by name during his speech, the two have been sparring over the last few weeks leading up to the primary. An ad put out by Michels’ campaign this week takes aim at Kleefisch for not initially backing Trump in 2016, though records show that Michels himself did not vote in that year’s primary.

Michels told The Associated Press he missed the primary because of “a sudden, unforeseen major issue on the big Michels Corporation construction project in New York.”

Michels did not commit to supporting a Trump presidential run in 2024 when asked at a town hall on Monday, but said the following day he would “proudly endorse him.”

Trump’s baseless claims of widespread fraud in the 2020 election have become a rallying cry for his supporters, including Adam Steen, a Trump-backed candidate for the state Assembly seat currently held by Speaker Robin Vos, R-Rochester. Vos, the state’s longest serving Assembly speaker and one of the most influential Republicans in the state, has fallen out of favor with Trump for not supporting his repeated calls to back the legally impossible decertification of the 2020 election.

“There’s a huge roadblock in the 63rd (Assembly District) and it must be removed from power,” Steen said in a brief speech Friday. “Some call him a RINO, others a treasonous traitor, I’m partial to the latter, but no matter what you call him it’s time to do one thing on Aug. 9 — It’s time to toss Vos.”

Trump said former state Supreme Court Justice Michael Gableman, who was hired by Vos last summer to review how the election was run, has endorsed Steen in the Aug. 9 primary, though Gableman has not formally announced an endorsement in the race.

Gableman was hired a cost of $676,000 after pressure from Trump, though legal fees and other court costs have pushed the price tag to more than $1.1 million — all of which will ultimately fall on taxpayers.

While Trump spoke highly of the investigation, Gableman himself reversed his position on decertification just weeks after proposing it. In releasing an interim report of his inquiry on March 1, Gableman told state lawmakers they should “take a very hard look” at decertifying the results of the 2020 presidential election. But just two weeks later, on March 16, the former justice concluded that decertification was a “practical impossibility.”

A recount, court decisions and multiple reviews have affirmed that Biden defeated Trump by about 21,000 votes in the state’s 2020 presidential election. Only 24 people out of nearly 3.3 million who cast ballots have been charged with election fraud in Wisconsin.

Michels, who has also been endorsed by former Gov. Tommy Thompson, has spent nearly $12 million on his campaign since entering the race in late April — the most a Wisconsin gubernatorial candidate has spent on their campaign. Kleefisch has raised more than $7.5 million since entering the race in September, while Evers has raised more than $11 million so far this year.

In addition to Pence, who campaigned in Pewaukee for Kleefisch just two days before Trump’s visit, the former lieutenant governor has been backed by U.S. Sen. Ted Cruz, a fierce Trump rival turned close ally, who won Wisconsin’s 2016 presidential primary. She also has been endorsed by former Gov. Scott Walker, with whom she served for eight years, and more than 50 Republican state lawmakers, including Vos and Senate Majority Leader Devin LeMahieu, R-Oostburg.

Election Day: Who's on the ballot in the Dane County area?

In addition to statewide races for governor, attorney general and U.S. Senate, there are local contests for Assembly and Congressional seats in the Aug. 9 primary. Before you cast a ballot, learn more about the candidates running.

Republicans running for the chance to face Democratic Gov. Tony Evers this fall will meet in the Aug. 9 primary.

Two Democratic candidates will meet in the Aug. 9 primary for lieutenant governor.

Eight Republicans are running in the Aug. 9 primary for lieutenant governor.

Three Republicans all seeking to shift election administration from a bipartisan board to an elected office will meet in the Aug. 9 primary for secretary of state.

With Sarah Godlewski running for U.S. Senate, the state Treasurer's seat is up for grabs this fall.

Republicans John Leiber and Orlando Owens will meet in the Aug. 9 primary.

Two GOP candidates will meet in the Aug. 9 primary, with the winner going on to face incumbent U.S. Mark Pocan, D-Black Earth, in the general election.

Four Democrats are vying in the Aug. 9 primary to replace retiring U.S. Rep. Ron Kind in a toss-up district.

Douglas Mullenix, of Menasha, faces an uphill battle if he plans to unseat incumbent Glenn Grothman, of Glenbeulah.

The Jefferson mayor faces a farmer who accepts that Joe Biden won the 2020 election. The winner faces Rep. Don Vruwink, D-Milton, who was redrawn into a new district.

Two candidates are vying for the Democratic nomination to represent Wisconsin Assembly District 43, which is currently held by Rep. Don Vruwink

A member of the Beloit City Council and a Dodgeville High School teacher are vying for the seat currently held by Democratic Rep. Mark Spreitzer.

Five Democratic candidates will face off Aug. 9 for the Assembly seat that has been held by departing Rep. Gary Hebl, D-Sun Prairie, for the last two decades.

Heavily-Democratic, the party's race for the 79th Assembly District features a Dane County Board supervisor and a former NASA employee.

Covering much of western Dane County as well as some of Iowa and Green counties, the 80th Assembly District has been held for 20 years by retiring Rep. Sondy Pope, D-Mount Horeb.

Five Democrats are vying for the Assembly seat of retiring Rep. Sondy Pope, D-Mount Horeb in the Aug. 9 primary.

"Kleefisch does not have what it takes to beat Tony Evers. Tony Evers is close to incompetent, but he’s going to win if he runs against Rebecca."

Tim Michels has spent nearly $12 million of his own money on his largely self-funded campaign since entering the race in late April.

Republicans running for the chance to face Democratic Gov. Tony Evers this fall will meet in the Aug. 9 primary.

Where the top GOP gubernatorial candidates stand on the issues

Alliant Energy Corp. on Thursday reported second-quarter results that were up compared to the same period a year ago.

Primary challengers like the one facing Assembly Speaker Robin Vos on Tuesday have been successfully targeting incumbent state lawmakers across the country.

What to watch in Wisconsin, 3 other states in Tuesday's primaries

What to watch in Tuesday's primary elections in Wisconsin, Minnesota, Vermont and Connecticut.

Voters in Wisconsin have spoken. Now the counting begins

Polls have closed for Wisconsin's partisan primary, which will narrow the field of candidates running in multiple local and statewide races.

Tim Michels has been endorsed by the former president, while Rebecca Kleefisch is the preferred candidate of the former vice president.

Vos said his opinion of Michael Gableman soured after the lead investigator recommended the Legislature decertify the 2020 results.

"We’ll never get to the end of the question because you’re expecting more than what this individual and the organization was prepared — and able — to deliver," Dane County Circuit Court Judge Frank Remington said.

Remington also ruled that the office had met the conditions necessary to remove Remington's previous contempt order, but ordered the office to pay $24,000 in penalties for the 12 days it took the office to satisfy the purge conditions. 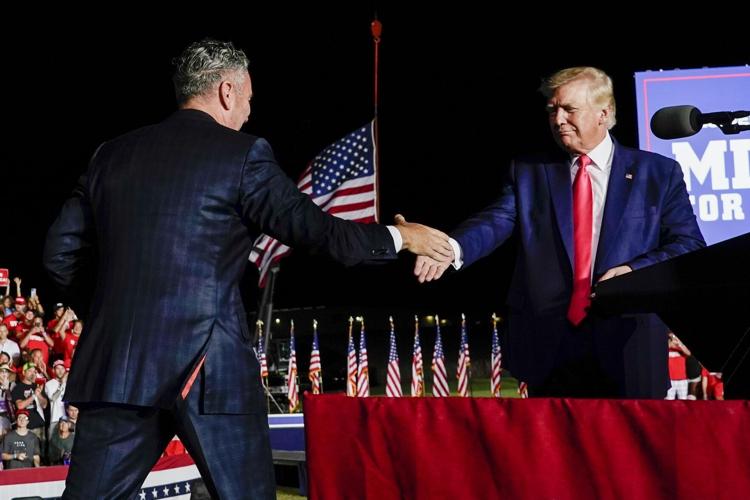 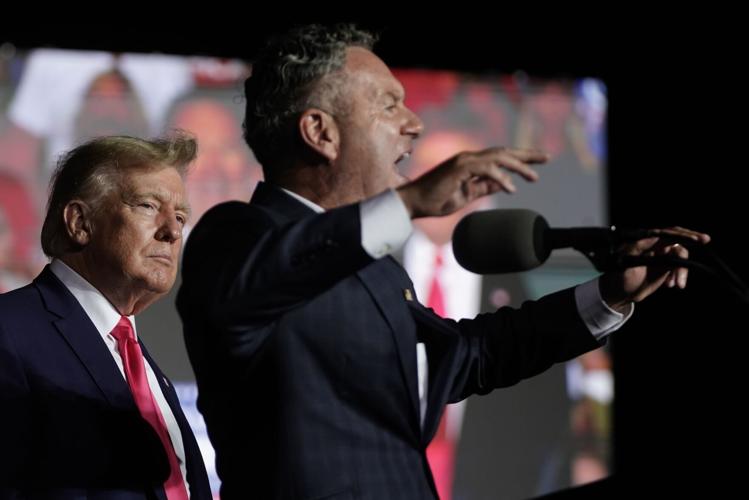 Former President Donald Trump and Tim Michels, a candidate for governor, focused some of Friday's speeches on false and misleading claims about the 2020 election. 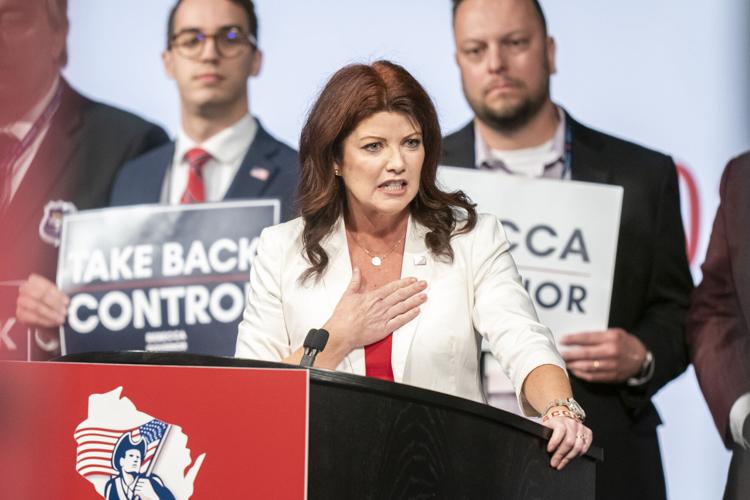 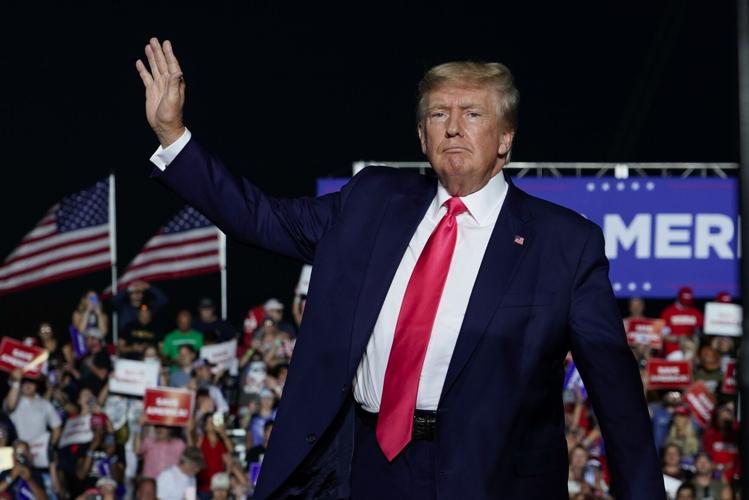