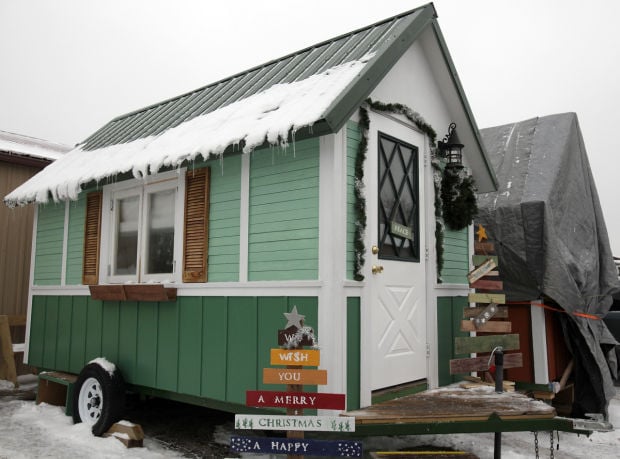 Occupy Madison Inc. is hoping to build and park "tiny houses" such as this one at a property at 2046-2050 E. Johnson St. that now hosts a service station. 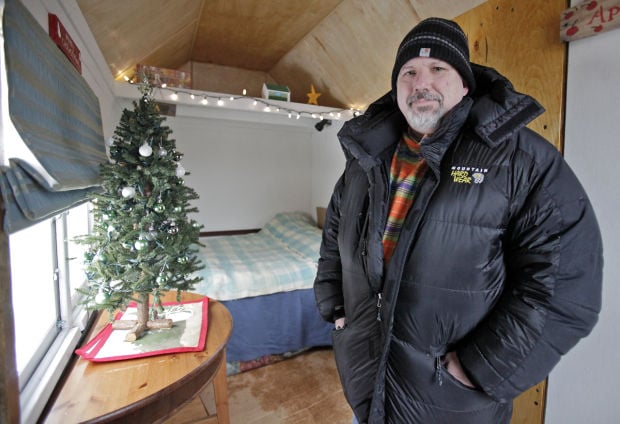 Bruce Wallbaum and other advocates for the homeless are hoping tiny houses can be placed permanently in church parking lots. 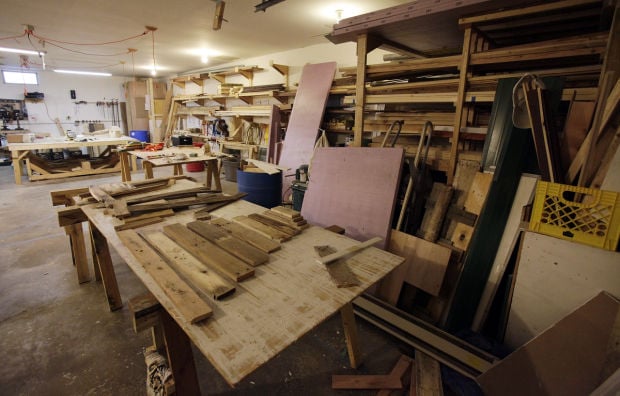 Tiny houses for the homeless are being built in an industrial warehouse in Madison. 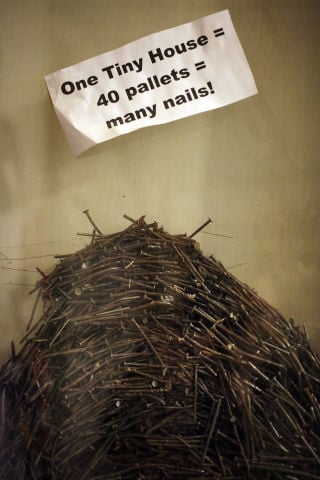 A shadowbox holds hundreds of nails removed from broken-down shipping pallets at an industrial park workshop where tiny houses for the homeless are being built in Madison.

Last spring, Betty Ybarra occupied a tent in a county park and with her tentmates dug moats to discourage oncoming floodwaters.

Starting Christmas Eve, she and a tentmate will upgrade to a brand new “tiny home” they helped build with aid from a variety of helpers including local colleges. It has a roof, insulated walls, a toilet and a sink. Christmas lights hang outside it.

It’s a twist of fate more fortunate than they could imagine possible.

“I was like, ‘Yeah, right,’ ” Ybarra, who’s been homeless since April, said of her reaction when originally presented the idea. “I’m too skeptical.”

Their house is the first of what organizers hope will be a village of similar houses that provide basic shelter against the elements and a home to be proud of for the homeless, who earn the residences through sweat equity at an East Side workshop set up to build and decorate the units.

Its construction came about thanks to a massive volunteer effort that included more than 50 people and started early in the summer with fundraising and technical support from Occupy Madison Inc., a nonprofit.

Steve Burns, an MATC math instructor, trained volunteers and oversaw much of the construction and design of the first two houses, which follow a basic blueprint but can include whatever touches and innovations their creators want.

One of those innovations — a pole-mounted solar panel — comes with heavy fingerprints from MATC and UW-Madison and origins in rural Costa Rica, where villagers use the solar-powered lights to guard against snake bites while heading to outdoor latrines. It can charge the battery that provides light to the house.

UW-Madison donated the panel for this house. The idea came from Ken Walz, an instructor of chemistry, engineering and renewable energy at MATC and an adjunct professor at UW-Madison. For seven years, Walz has led students on study abroad trips to a national park in Mastatal, Costa Rica.

The village, rebuilding its economy after its cocoa industry cratered, had unmet energy needs because of its rural location. Walz had won a federal Department of Education grant to lead study abroad trips framed around renewable energy for international development.

Walz and his students helped with the village’s most pressing problem — a lack of reliable light — with solar panels of 40 to 60 watts. They’re designed for simplicity and ease of use. They matter especially because villagers have outdoor toilets and used to fall prey to vipers, nocturnal snakes that used darkness to their advantage. The nearest hospital is 30 miles away.

Calvin Cherry, a UW-Madison graduate student who’s been on Walz’s trip to Mastatal, saw an opportunity for the solar panels on Madison’s new tiny homes, which are based on models in Portland, Ore., and Olympia, Wash.

The 80-watt solar panel he developed will charge a sealed lead acid battery. It can power the 98-square-foot home’s four LED lights and cellphone charger base. Burns, the MATC math instructor, engineered a metal pole to mount the panels outside the house.

The first homes are heated with a vented propane heater mounted on the wall. They also can use a space heater if parked near a plug-in electricity source.

However, the plan needs a bit more refining. A recent attempt to mount the metal pole exposed a problem: it’s too tall to fit under bridges, said Bruce Wallbaum, project organizer for Occupy Madison.

The houses currently must be trailered around the neighborhood a couple of times a week. City ordinance allows them to be parked on the street as long as they’re moved every 48 hours.

The transient life will eventually end for the houses as it does for their occupants, Wallbaum said. He and other organizers of Occupy Madison are working with area churches to allow the houses to park up to three in each lot. Eventually the organization hopes to buy land and create a village of up to 30 of the houses.

Khari Sanford, who is accused in last year's fatal shooting of a married couple, wrote a letter to the judge in his case earlier this month. A trial is scheduled for May.

Two Afghan men staying at Fort McCoy in western Wisconsin were charged Wednesday with committing unrelated crimes while staying at the base.

Kenosha Unified district residents slashed the salaries of School Board members, required their in-person meeting attendance in order to be paid, and recommended a decrease to next year's tax levy at Tuesday night's annual meeting of electors.

A Sauk City man faces 3.5 years in prison after allegedly threatening an attorney, the law firm and new property owners of a parcel of land previously owned by his family in a manifesto he hand delivered to the attorney in June.

A Columbia County Sheriff’s Deputy was led on a chase on Highway 16 starting near Lewiston but was unable to catch the car even at 115 mph. When the car came to a stop, two people fled the car and into a cornfield.

Occupy Madison Inc. is hoping to build and park "tiny houses" such as this one at a property at 2046-2050 E. Johnson St. that now hosts a service station.

Bruce Wallbaum and other advocates for the homeless are hoping tiny houses can be placed permanently in church parking lots.

Tiny houses for the homeless are being built in an industrial warehouse in Madison.

A shadowbox holds hundreds of nails removed from broken-down shipping pallets at an industrial park workshop where tiny houses for the homeless are being built in Madison.