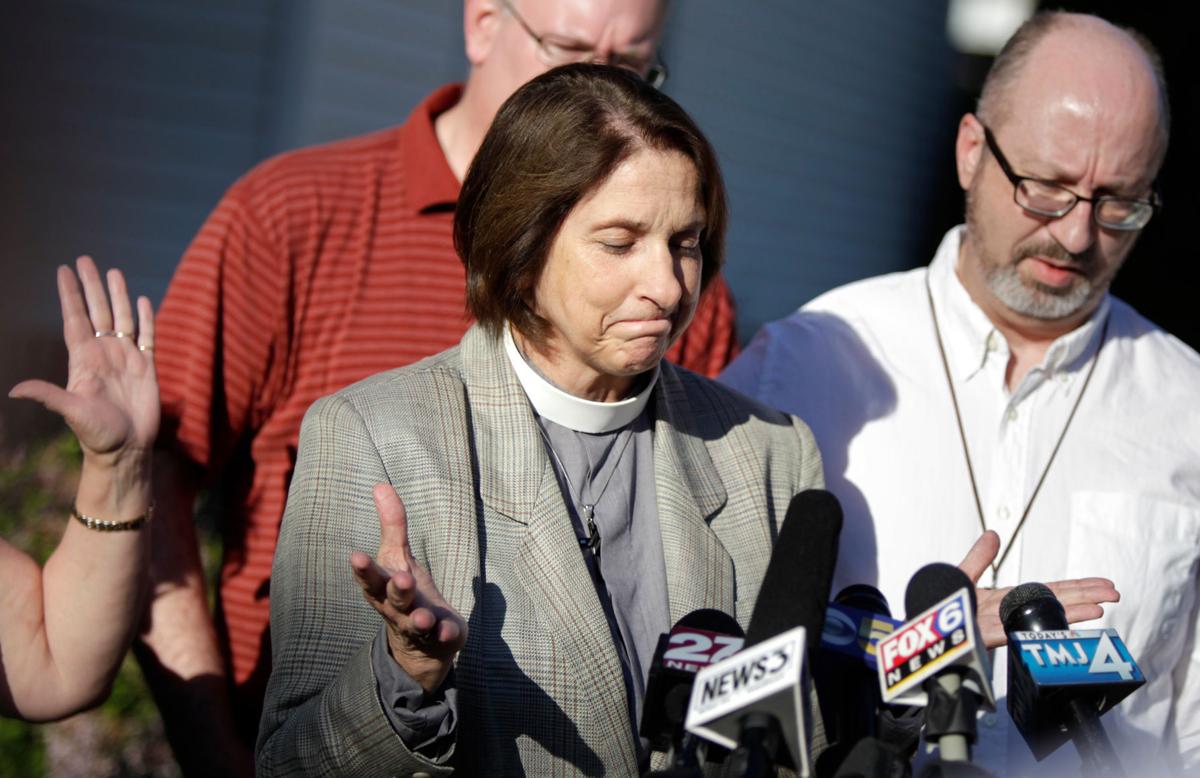 The Rev. Kristin Frederich, pastor of First Presbyterian Church, prays prior to a vigil service at her church in Cambria Thursday for the victims of Wednesday's explosion. The vigil was closed to the media. 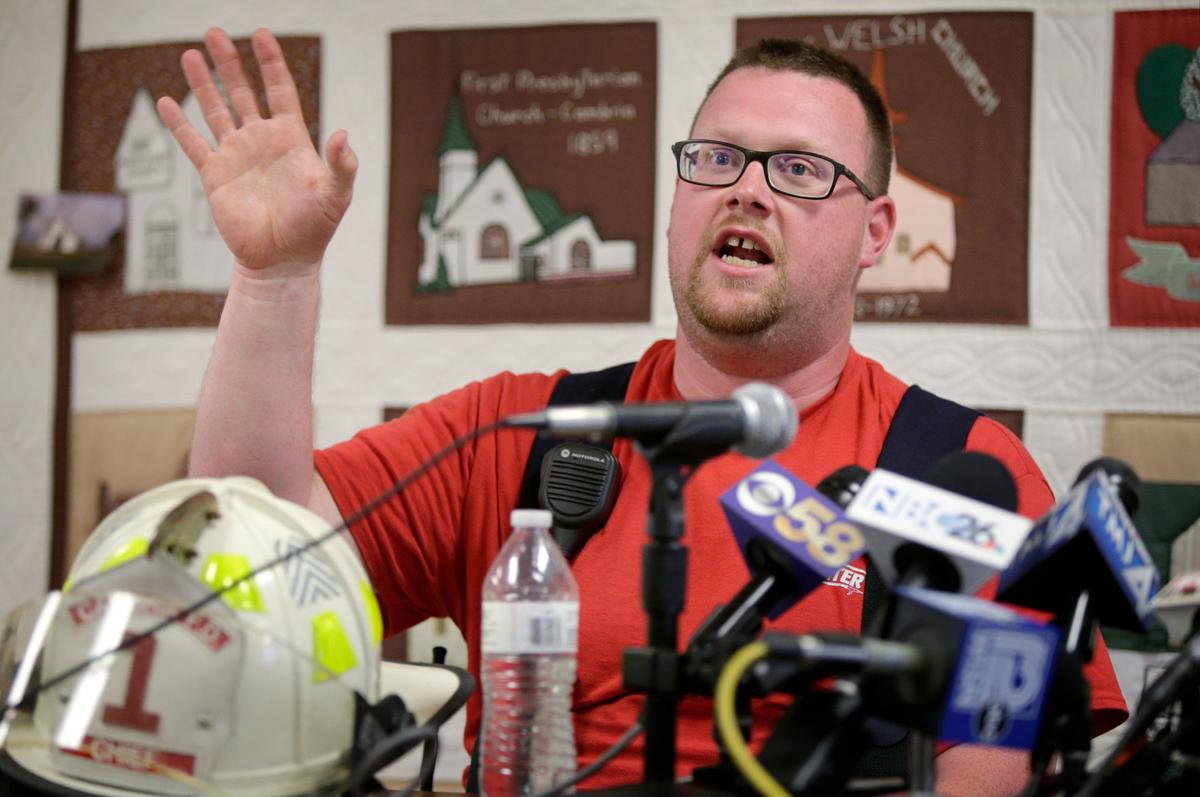 Cambria Fire Chief Cody Doucette praised the professionalism of the 23 fire departments and multiple EMS crews that responded to Wednesday's explosion. "We train for the worst," Doucette said. "This is the worst of anything I could imagine." 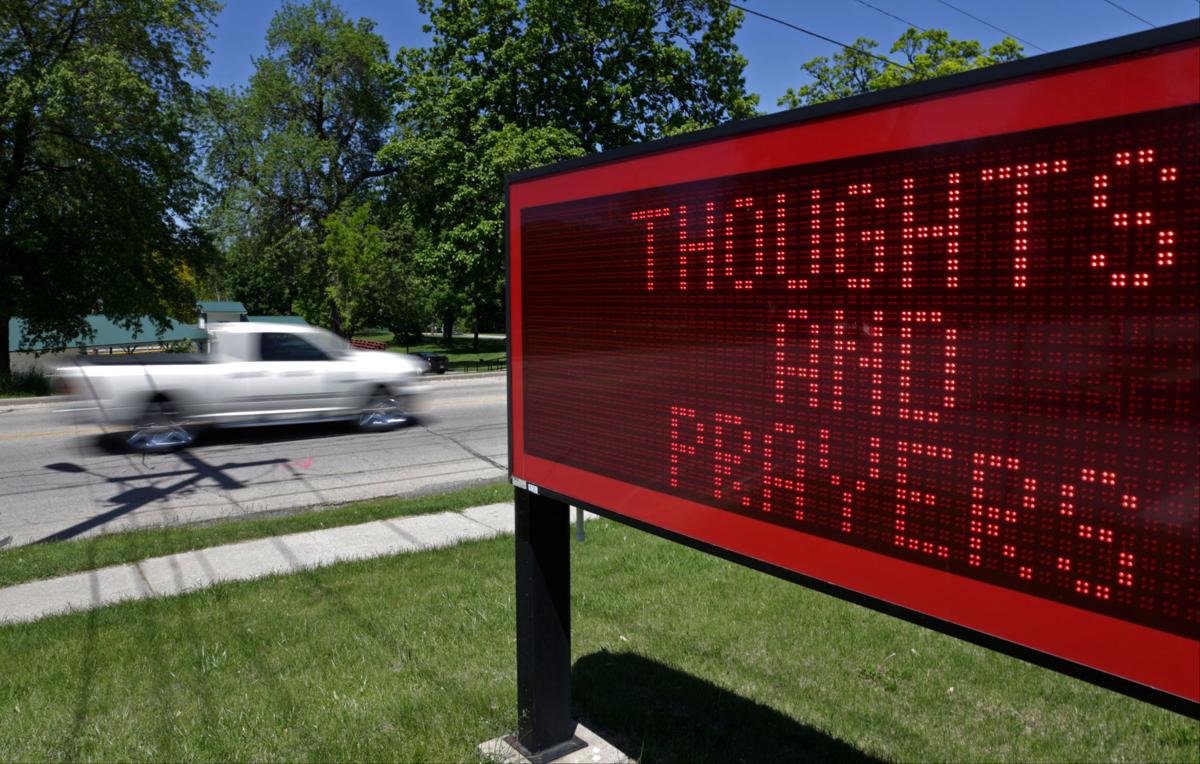 A sign board outside the Cambria-Friesland schools building asks for prayers following an explosion that killed at least one worker at the nearby Didion Milling Plant on Wednesday. Schools were shut down Thursday but were to resume Friday.

CAMBRIA — Just about everybody in Cambria knows somebody who works at the Didion Milling Plant. And in this village of just under 800 people, Cathy Ramirez is the kind of person who knows just about everybody.

So Ramirez, a waitress at Two White Doves Family Restaurant, on the single block downtown that contains Cambria’s library, village offices, bank and both of its bars, spent much of Thursday on her phone.

She called friends and acquaintances — some in Wisconsin, others in Texas, a couple in Mexico — to get and spread the word about the workers hurt or missing in the explosion at the corn mill late Wednesday night that killed at least two people.

The good news was that of the two dozen or so Didion employees Ramirez knows, most work day shifts. The bad news was that two of those who work nights were in comas Thursday afternoon.

At The Dump, a bar and restaurant across West Edgewater Street, bartender Cindy Erikson was relieved to hear the Didion employee she knows, a coworker’s son, was safe and accounted for.

“Everybody’s just sick to their stomach, because it’s so huge and so close to home,” Erikson said.

As the wrecked Didion facility smoldered through Thursday, many residents of this village that sits along a small lake about halfway between Portage and Waupun in Columbia County were taking stock of how closely they were connected to the tragedy.

And while their top priority was finding out about the workers hurt in the blast, some also wondered what the explosion could mean for Cambria if the village loses one of its economic anchors.

County snow plows blocked the roads that lead to the facility, which hulks over Cambria from the southeastern edge of town. A convoy of trucks, one marked “Urban Search and Rescue,” rumbled toward the mill Thursday afternoon.

TV news vans lined the streets around the First Presbyterian Church, where the Red Cross had set up a center in the basement, and dotted the parking lot of the single building that houses the Cambria-Friesland elementary, middle and high schools.

The schools, located about a quarter of a mile from Didion, were closed Thursday but will reopen Friday, when officials said the high school’s graduation ceremony will go on as scheduled. A message board outside flashed, “Thoughts and prayers.”

The village of Cambria’s relationship with Didion has often been a rocky one.

Founded in 1972 in Johnson Creek, where the company is still headquartered, Didion employs a total of about 225 people, many of whom move between locations in Jefferson, Columbia and Green Lake counties, making it hard to know how many work at the Cambria facility, which opened in 1991.

The addition of an adjacent ethanol facility led to a fight between the Village Board and Didion in 2006 over environmental and safety concerns. A group of Cambria residents sued the company two years later, alleging the milling operation was causing air pollution, though the suit was thrown out.

Didion has also paid fines and settlements with state and federal regulators over workplace safety and environmental protection violations.

But Didion could also be a good corporate citizen, residents said — it sponsored events put on by the library and historical society, and gave money to The Dump’s annual fundraiser benefiting a range of organizations, including local schools and the volunteer fire department.

“We’re always cooking for them, and they’re always sending us new customers,” Erikson said. “They’re huge in the community.”

Explosion, then town springs to action

The loudest thing Barb Haldemann typically hears at night in Cambria is rushing water from the dam next to her home on Taggart Lake. That quiet shattered with the explosion at Didion around 11 p.m. Wednesday.

“Heard it, felt it — and then the whole town went dark,” Haldemann said. The blast had knocked out Cambria’s power.

When she went outside, Haldemann saw an orange glow in the sky to the south as the corn mill burned.

“Sirens started and they didn’t quit all night,” Haldemann said.

On the other side of the lake, closer to the facility, Jeremey Blease was afraid the blast could cause another explosion at the ethanol operation, so he moved with his daughter to a relative’s home farther away. His wife worked overnight at her job in village government.

Ramirez said there has been a mix of workers at the milling facility — some stayed there for decades, while others worked seasonally. Employees seemed to like Didion, she said, though for many the work could be tough, with a lot of heavy lifting.

“There’s always a job there — it’s whether you want it or not,” she said.

Sixteen workers were inside the plant when the explosion happened, according to company officials.

As Ramirez and others waited for more information about the explosion and the workers, questions about what would happen to other Didion employees, and what the company’s future in Cambria looks like, added to the uncertainty Thursday. Along with jobs, the plant provides business to area farmers, Ramirez said, and its employees and executives are regulars at Two White Doves and The Dump.

“It’s not just the workers there” who will be affected if the plant closes, Ramirez said. “It’s going to be everybody.”

Cambria mill that exploded had been reprimanded on safety; was site of recent fire

Recovery crews searched a mountain of debris for two workers on Thursday following an explosion at a corn mill plant that killed at least one employee, injured about a dozen others and leveled parts of the sprawling facility in southern Wisconsin, authorities said.

CAMBRIA – Even as he talked about things like gratitude, healing, charity and rebuilding, John Didion wore the face of a man in mourning.

If anything had been different, there probably would have been one more person dead in the wake of the Didion Milling explosion, but everyone seemed to be in place to save Collin Vander Galien’s life.

After he took his first unsteady steps on his new prosthetic legs, Collin Vander Galien told the man who fitted him with the prostheses that learning to walk again wasn't as bad as he'd imagined.

Federal workplace safety regulators said the tragedy could have been averted if Didion Milling had taken well-known precautions.

Screnock says the experience gave him knowledge of how environmental law and government regulators work together.

The Rev. Kristin Frederich, pastor of First Presbyterian Church, prays prior to a vigil service at her church in Cambria Thursday for the victims of Wednesday's explosion. The vigil was closed to the media.

Cambria Fire Chief Cody Doucette praised the professionalism of the 23 fire departments and multiple EMS crews that responded to Wednesday's explosion. "We train for the worst," Doucette said. "This is the worst of anything I could imagine."

A sign board outside the Cambria-Friesland schools building asks for prayers following an explosion that killed at least one worker at the nearby Didion Milling Plant on Wednesday. Schools were shut down Thursday but were to resume Friday.