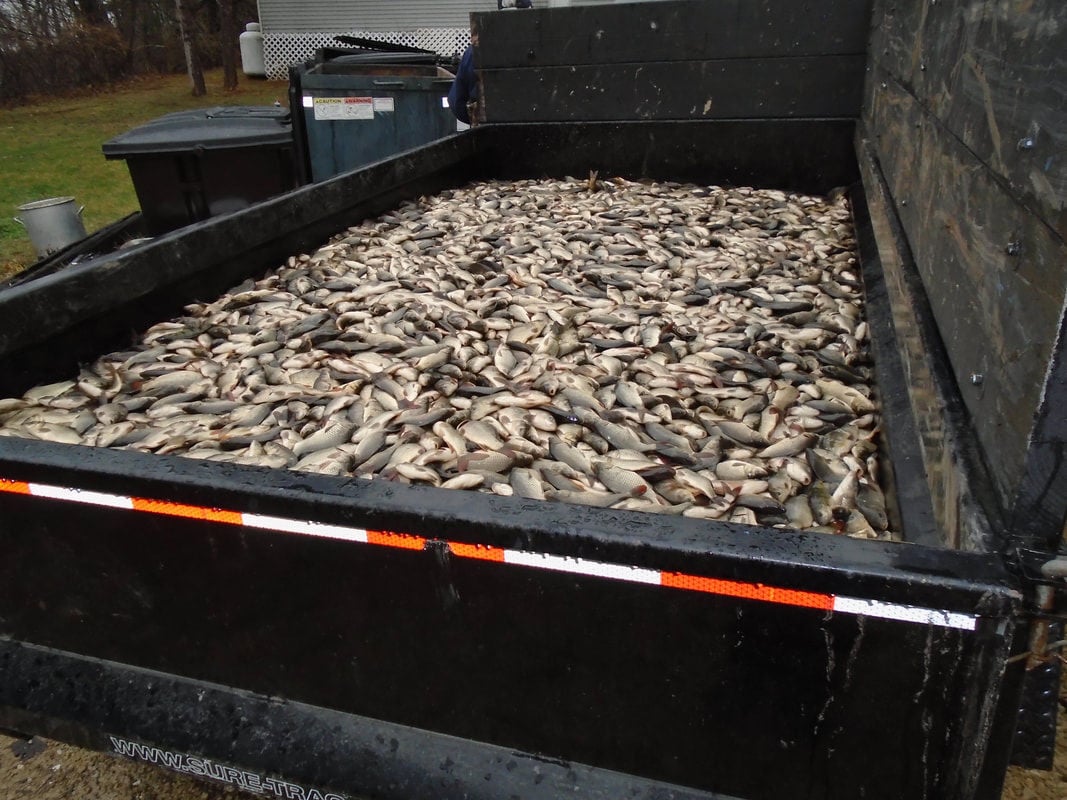 Hundreds of carp sit in the trailer of a truck waiting for delivery to a nearby farm for the purpose of composting. 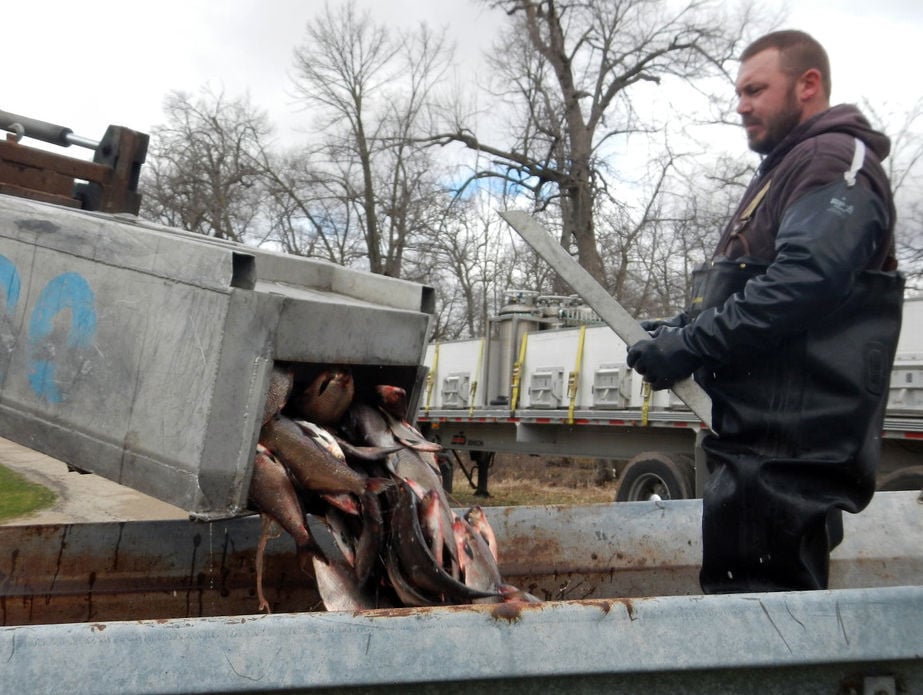 Carp transitioning from the tanks from the boats on the lake to a large semi truck that transports the fish.

A group of volunteers recently removed more than 100,000 carp from Lake Mason with a series of nets after the lake’s water level was drawn down to remove weeds over the winter.

In the last five years, the Lake Mason Management District estimates it has taken over 60,000 pounds of carp from the lake. Lake Mason is east of Briggsville and sits in Adams and Marquette County.

“This year, we put the carp in the back of a trailer and gave them to a local farmer to be used for compost,” said Dave Ditter, LMMD chairman.

Ditter said over 100,000 yearling carp, anywhere from three to seven inches long, were removed from Lake Mason last weekend. It was all done with the help from volunteers and a series of fyke nets supplied by the Wisconsin Department of Natural Resources.

Fyke nets, or trap nets as they are commonly known, are a series of hoops fish follow through until they are trapped in a centralized net.

“We had 13 people on Friday. Then it rained on Saturday and we were down to seven people and on Sunday people were tired and we only had six volunteers,” Ditter said.

Paul Piszczek a WDNR fisheries biologist, said working with the LMMD has been a good relationship and the Lake Mason situation is very unique with the abundance of common carp found in the lake.

Piszczek said it is a common carp that is from the Eurasian carp family. It is an invasive aquatic species that uproots aquatic plants and also sucks up sediment of the lake floor. When the sediment is excreted it creates fuel for blue-green algae blooms which can also be harmful to the lake.

Carp are nothing new in Wisconsin as they have been around since 1872, according to Piszczek.

Ditter said that over the last five years, the DNR had a contract to have the fish taken from the lake and sent to New York State or North Carolina.

“They would sell it for the Jewish holiday, Yom Kippur, and make gefilte fish,” Ditter said.

The LMMD reported in 2016, when the contract began between the WDNR and a fishery company to remove the carp, that 44,000 pounds of carp were harvested and removed from the lake. At that time one carp weighed as much as 40 pounds.

“I just want to thank John and Samantha Sage of The Cove Supper Club,” Ditter said. “They went above and beyond donating coffee and donuts and allowing us to stage our equipment on the property.”

On a staggered schedule, groups wound their way around nearly 10 acres of new exhibits Saturday to see the results of the International Crane Foundation’s $10 million renovation on its first day open to the public since closing in late 2018.

Hundreds of carp sit in the trailer of a truck waiting for delivery to a nearby farm for the purpose of composting.

Carp transitioning from the tanks from the boats on the lake to a large semi truck that transports the fish.