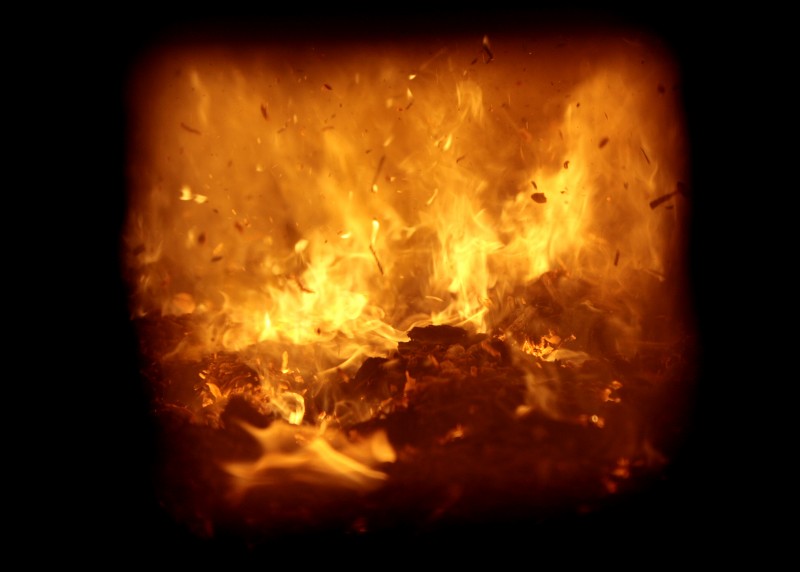 Engineers at the E.J. Stoneman Electrical Station in Cassville said it has been a challenge to learn how to properly burn the wood that now powers the plant. 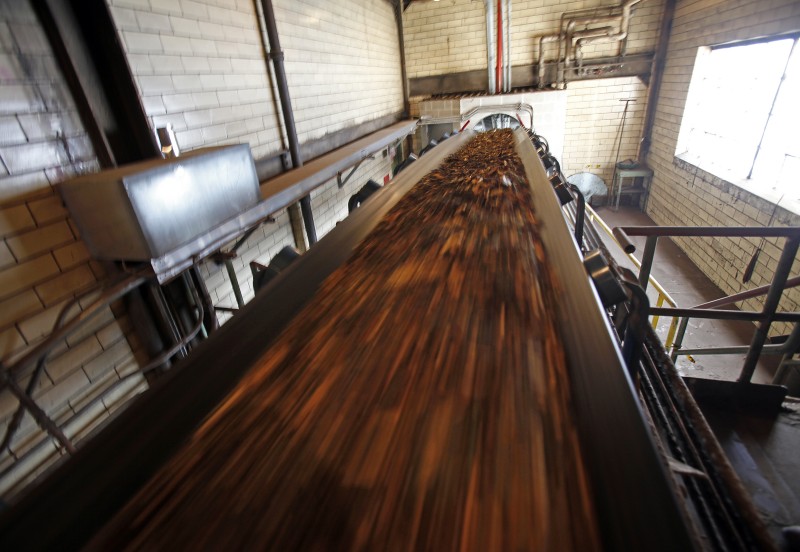 Conveyors transport wood fuel to the boilers at the E.J. Stoneman Electrical Station in Cassville, which burns about 1,000 tons of wood a day since its conversion from coal last year. 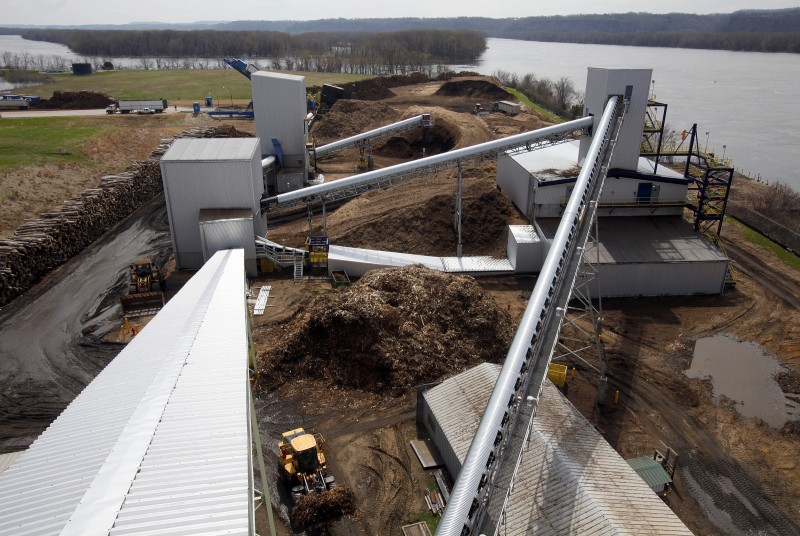 Piles of wood now fill the yard at the 60-year-old plant, which sits next to the Mississippi River. Sprinkling systems and covered conveyors have been added to help keep down dust, plant officials said. 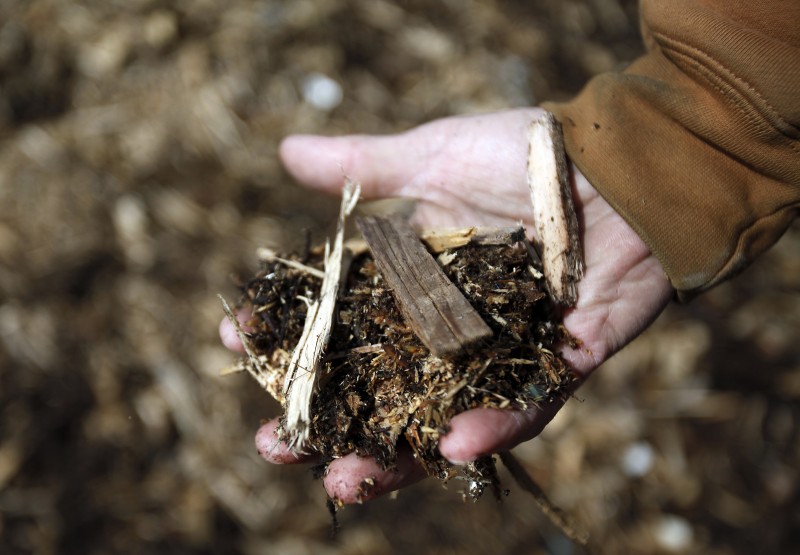 Plant manager Rich Nelson displays a handful of the mulch-like wood that now powers the electrical generating plant, which provides enough electricity for about 28,000 homes. 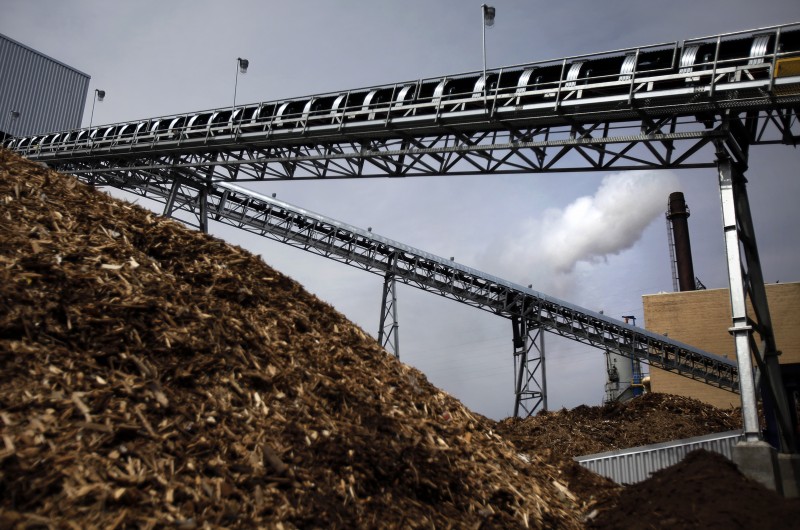 Wood biomass sits in the yard under a system of conveyors at the E.J. Stoneman Electrical Station in Cassville. 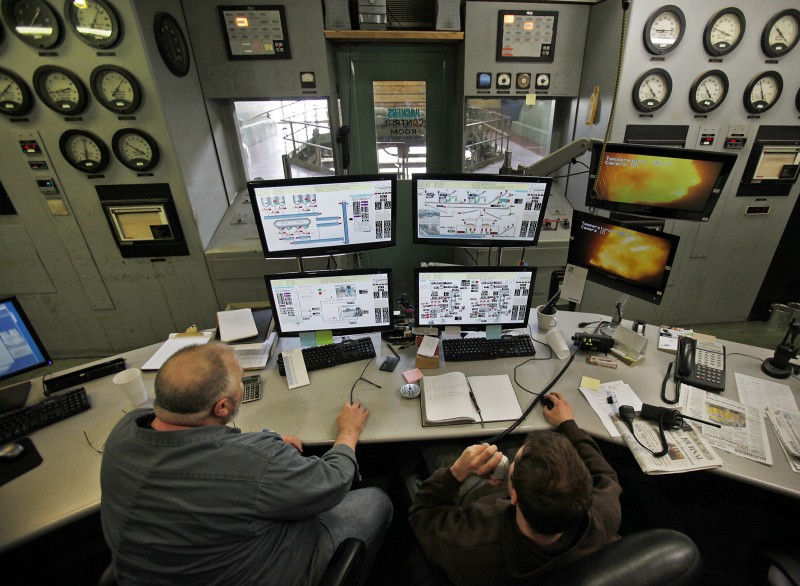 From smoking piles of wood chips in the countryside to dust on kitchen counters in Cassville, the difficulties posed by the conversion of the E.J. Stoneman Electrical Station in Grant County to burn wood instead of coal have challenged both village residents and plant engineers.

But the adventures and misadventures of the conversion stand as an informative and cautionary tale of what may lie ahead as Wisconsin and the rest of the country struggle to find alternative renewable fuels to help wean us from dirtier, nonrenewable combustibles such as coal.

Even so, Rich Nelson, plant manager, is more convinced than ever that the plant, one of just a few in the country that burn only wood, represents a future that will see much less dependence on nonrenewable fuels. After all, he said, it makes perfect sense to be turning demolished buildings in Milwaukee into power for more than 28,000 homes in the Cassville area.

“If we weren’t here,” Nelson said, “then all that construction material would be going into a landfill.”

The 60-year-old power plant, which rises next to the Mississippi River, was converted last year by Michigan’s DTE Energies, which has owned the plant since 2008. Its two boilers are now heated by wood rather than coal, a process known in the trade as “repowering.”

The transition has had its rough spots. Nearby residents have complained about problems such as ash on their window sills and kitchen counters, and wood chip piles stored in quarries that spontaneously combust and fill scenic valleys with blue haze.

“It’s frustrating sometimes,” Nelson said. “I think the expectation was that we’d push a button and then everybody’s feet would be up on their desks and we’d be making power.”

Learning as they go

Even staffers with the state Department of Natural Resources, charged with regulating emissions from the wood-burning plant, are learning as they go, sometimes without much help from the federal Environmental Protection Agency, which is still putting together rules for plants that burn biomass — organic, renewable fuels such as wood and corn cobs.

“We’re in new territory,” said Maria Hill, the air management engineer with the DNR who is working with the plant. “It’s a new area. And we are trying to find our own way.”

So far, the DNR has issued two letters of noncompliance to the plant, one for not meeting state air pollution statutes and another during the conversion for failure to comply with a construction air pollution permit. Nelson said the plant is working with the DNR to resolve the problems and added that the latest results from tests the plant conducted on its smokestacks showed emissions to be meeting pollution standards.

Nelson said each day brings new challenges, not a bad thing for an engineer who likes to solve problems. The conversion itself was tough, largely because of the age of the plant and the equipment. The bottoms of the old boilers were removed and replaced with new grates designed to burn wood. The parts of the plant that were used to process, store and move coal had to be redesigned to handle wood, which comes to the plant in the form of mulch-like chips. For example, at some point in the fuel-handling process, magnets were required to pull out nails that had been missed when construction wood wastes were initially pulverized.

Eventually, it came time to fire up the plant, and even that proved interesting.

“Initially,” Nelson recalled, “we just started it like a campfire.”

Since then, engineers have installed a propane igniter, which works sort of like a pilot light on a water heater.

“When it came time to operate the plant, there was a learning curve,” Nelson said.

Most problematic, he said, was learning how to burn the wood fuel, figuring out how to blend the different kinds of wood, for example, or how much air to use to keep the wood burning at the right intensity.

That particular learning process probably accounted for at least some of the emission problems, said Rob Sanch, the plant’s environmental engineer.

“When you have operational issues, they lead to environmental issues,” Sanch said.

Cassville resident Dave Badula said that over the winter, there were days when wood ash from the plant darkened the snow. But, he added, that problem seems to have been fixed.

Nelson said the plant installed devices called precipitators that help collect the ash before it goes up the chimneys. He said the plant has made progress in adding treatment systems that purge emissions of other contaminants.

Despite such stumbles, one of the advantages of burning wood, Sanch said, is that the pollutants produced by coal, such as sulphur and mercury, are not as much of a problem with the types of recycled wood fuels being used at the converted Cassville plant.

Troy Runge, a professor in biological systems engineering at UW-Madison, said that even though the plant has had some startup struggles, the wood fuel still is cleaner than coal. All fuels come with problems, he said. Natural gas, for example, may be cheaper and cleaner, but it’s nonrenewable and can cause considerable damage to the environment when it is freed from the rock formations in which it is stored.

“I’d love to say there is some perfect technology,” Runge said. “But you can’t find it.”

Of all the problems that have stretched Nelson’s work days, however, few have been as difficult as finding and learning how to handle the wood that now powers the plant. In fact, he said, if he were to offer a warning to an engineer faced with overseeing such a conversion elsewhere, it would be about the perils of dealing with wood.

The plant has a ravenous and never-ending appetite for wood fuel. It requires 1,000 tons per day, 50 to 70 semitrailer loads. Sources include everything from the wood debris of demolished buildings in Milwaukee to brushy slash from logging operations. The plant has about 30 contracts with wood suppliers, Nelson said, and has had to build its own market and supply chain because wood-burning plants are so new.

Runge was involved in planning for the use of biomass at the Charter Street Heating and Cooling Plant before Gov. Scott Walker halted its conversion to renewable fuels. He said there were two major challenges to such operations: finding the sources of wood and learning how to burn the wood.

“How do you go from coal to a biomass fuel that is going to combust the way you want it to? With time, they’ll learn which of the fuels are really good. And they’ll learn how to blend it and how to store it,” Runge said.

“They’d leave their windows open and were seeing a layer of dust building up on their window sills,” Williams said.

Nelson said the plant has enclosed many of the fuel handling areas and is installing a watering system to dampen the fuel to keep dust down during the dry summer months. He also said the problem of self-combusting wood chips stored in area quarries has been addressed by learning how much fuel must be stored. Two of the quarries that posed problems are now empty, he added.

Williams said residents understand the plant operators are going through a learning process, and most are pleased with how problems have been handled.

Through it all, Nelson said, he has continued to believe that he is helping to usher in the future.

“I definitely think that is true, once we get the bugs worked out,” Nelson said. “I do see wood as a good material for this. And also a benefit to the environment.”

The Nature Conservancy announced Tuesday that it has closed on 80 acres of forest adjacent to a 220-acre parcel recently added to Devil’s Lake State Park.

John Greenler will take over Oct. 1 as the volunteer group’s first executive director.

Through a new partnership with Madison BCycle, library card holders can access one of more than 330 electric-powered bikes for free.

Engineers at the E.J. Stoneman Electrical Station in Cassville said it has been a challenge to learn how to properly burn the wood that now powers the plant.

Conveyors transport wood fuel to the boilers at the E.J. Stoneman Electrical Station in Cassville, which burns about 1,000 tons of wood a day since its conversion from coal last year.

Piles of wood now fill the yard at the 60-year-old plant, which sits next to the Mississippi River. Sprinkling systems and covered conveyors have been added to help keep down dust, plant officials said.

Plant manager Rich Nelson displays a handful of the mulch-like wood that now powers the electrical generating plant, which provides enough electricity for about 28,000 homes.

Wood biomass sits in the yard under a system of conveyors at the E.J. Stoneman Electrical Station in Cassville.