Despite efforts by the Biden administration, rising prices and material shortages have stalled construction of Wisconsin solar farms, slowing the state’s clean energy transition and potentially increasing costs to ratepayers.

Three utility projects with a combined capacity of 574 megawatts have been delayed and face potential cost overruns largely stemming from difficulty securing solar panels and other key parts, according to regulatory filings.

In each case, utilities say supply chain constraints were worsened by a federal investigation into whether Chinese manufacturers are circumventing import tariffs by routing products through four southeast Asian countries.

No such violations have been substantiated, but those imports, which account for more than half of the panels used domestically, slowed to a trickle amid fears of retroactive tariffs of up to 250%, according to the Solar Energy Industries Association.

The trade group blamed supply-chain constraints for a 24% nationwide reduction in solar installations during the first three months of this year, the lowest level since the start of the pandemic, and cut its projections for 2022 in half.

Last week utilities cited solar delays — along with concerns of future capacity shortages — as reasons for prolonging the life of three of the state’s largest coal-fired power plants.

Clean energy advocates worry the supply-chain disruption could affect more than 3,000 megawatts of utility-scale solar generation under development in Wisconsin.

“This is a real concern,” said Heather Allen, executive director of Renew Wisconsin. “The state is still moving forward but this has put a crimp in our ability to construct clean energy projects in the short term.”

Solar industry advocates hailed the order as a positive step but say the nearly two-month pause in shipments has resulted in ongoing bottlenecks made worse by other material shortages and cost hikes.

Madison Gas and Electric and We Energies notified the PSC this week that completion of the second phase of a 300-megawatt solar farm in Iowa County has been pushed back by three months because of problems securing solar panels and other equipment.

The utilities also said rising material and labor costs have increased the $195 million price tag by an undisclosed amount. They say there is “no public benefit“ to disclosing the cost increase, which they claim would only benefit competitors, though the PSC has not made a final determination on whether that information should remain confidential.

We Energies’ parent company, WEC Energy Group, indicated supply-chain issues are also likely to delay other solar projects still awaiting regulatory approval, which the company cited as a factor in its decision to delay retirement of two coal-fired plants.

In a May call with investors, chairman Gale Klappa said he expects solar panel prices could jump by as much as 40% and suggested the company could potentially “pivot to wind” power for some of its long-term needs.

Last week Xcel Energy notified regulators that construction of a 74-megawatt solar farm in western Wisconsin has been delayed by at least a year due to shortages of solar panels and other equipment.

The company said the Pierce County project, originally scheduled to come online by the end of this year, would not be completed until sometime after 2023.

Xcel did not indicate whether the project’s $104.5 million price tag would be affected, though spokesperson Christine Ouellette said the project “is not immune to market pressures like rising labor, material, and equipment costs.”

Xcel previously said supply-chain issues prompted the company to seek a delay in regulatory approval for a $575 million solar farm near the Twin Cities that would be Minnesota’s largest solar power plant.

Ouellette said Xcel expects the first phase of that Sherco plant to enter service by the end of 2024 with the rest coming online in late 2025.

Alliant Energy, which plans to invest about $1.5 billion in a dozen solar sites across the state, has postponed the start of construction of a $250 million solar farm in Grant County by five months in order to “manage supply chain, material delivery, and schedule dynamics.”

The utility is also seeking permission to grade more of the 1,900-acre site near Potosi and use larger panels to reduce the need for increasingly expensive steel and cables.

While the tariff threat had the potential to add unexpected costs, utility spokesperson Tony Palese said Biden’s order “provides added certainty and reinforces our plans” to move forward, with three projects slated to start this month and the rest by August.

Palese said Alliant plans to bring its first four solar farms online this year and expects to have about 1,100 megawatts in service by 2024, when it had planned to retire the first of two coal-fired generators at the Columbia Energy Center near Portage.

But in an about-face last week, Alliant said it would keep the Columbia plant running into 2026 in order to “weather multiple uncertainties,” said David de Leon, president of Alliant’s Wisconsin utility.

While regulators have not initiated any formal review of the delays or cost increases, Public Service Commission spokesperson Matthew Sweeney said the commission “is continuing to monitor the filings from applicants” and could reopen dockets “should the need arise.”

“It’s also important to note that it is not just solar projects alone seeing cost increases,” Sweeney said. “We are seeing these increases throughout the life cycle of all utility operations.”

Michael Vickerman, policy director for the industry trade group, said Thursday’s announcement underscores the risks of putting “all of our clean energy eggs in the utilities’ basket.”

Instead, Vickerman said Wisconsin needs policies — such as the ability to lease panels — that will make it easier for businesses and individuals to generate their own clean energy.

Despite the industrywide slowdown, the SEIA noted that residential installations saw record-setting growth during the first quarter amid surging demand.

“Utility-supplied solar power will be a significant contributor to achieving carbon reductions in Wisconsin,” Vickerman said. “But we need all flavors of solar power ... to get the job done.”

For the past two decades John Greenler's work has focused on the risks of climate change and the efforts to solve it.

Forecasters are experimenting with a new warning system for Madison and Milwaukee that doesn’t just account for the heat and humidity but predicts the human health outcomes.

The Madison-based utility is rolling out a suite of programs to offer cash rewards in exchange for giving up occasional control over thermostats and water heaters.

Wisconsin transportation officials are crafting a plan to spend more than $78 million in federal infrastructure funds to support electric vehicles.

The utilities initially notified regulators in June that the second phase of the 300-megawatt solar farm would exceed the $195 approved cost but sought to withhold the amount. 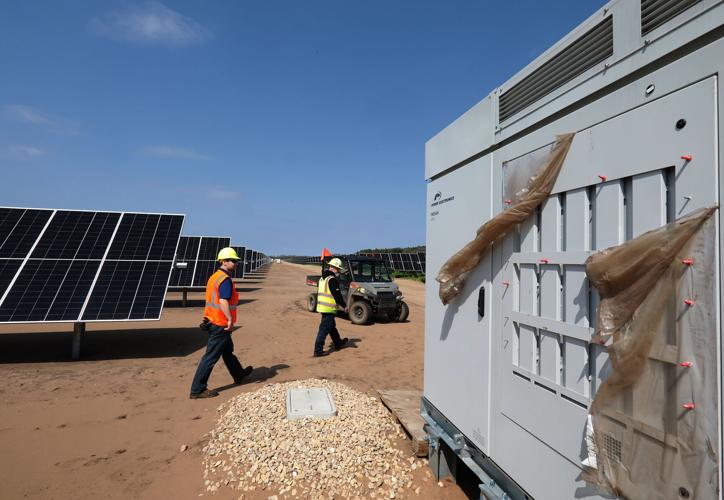 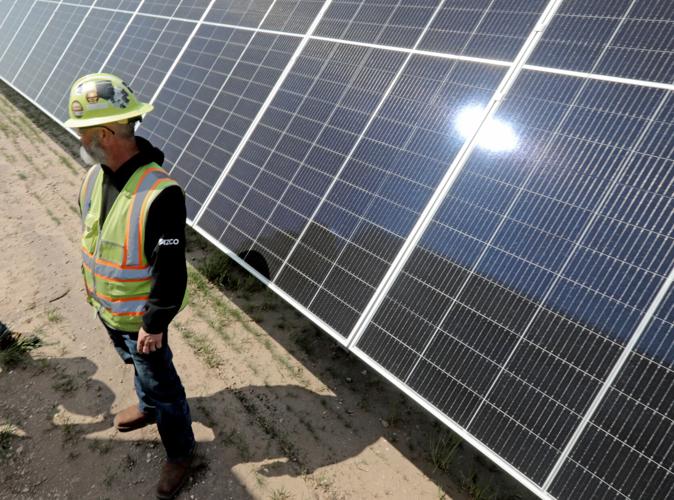 Construction manager David Ball with some of the 122,595 solar panels at Alliant Energy's Bear Creek Solar Farm, which began producing energy this week. Supply-chain constraints made worse by a federal trade investigation have been blamed for delays at three utility-scale solar farms under development in Wisconsin. 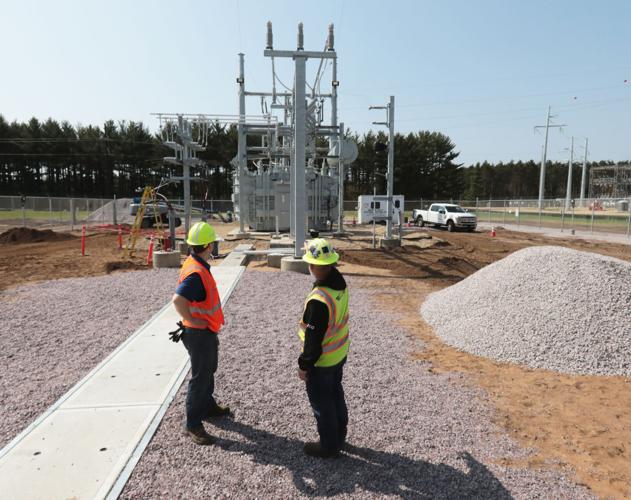 Alliant Energy's 50-megawatt Bear Creek Solar Farm, which began generating electricity this week in Richland County, is the first of a dozen solar facilities Alliant plans to build by the end of next year. However, supply-chain constraints have delayed construction of several utility solar projects, and last week utilities said they would delay retirement of three coal-fired plants. Pictured at the Bear Creek site are Alliant communications manager Tony Palese, left, and construction manager David Ball. 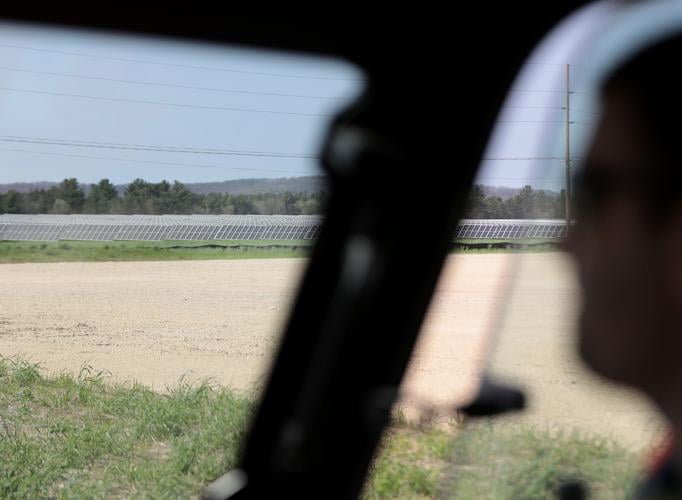 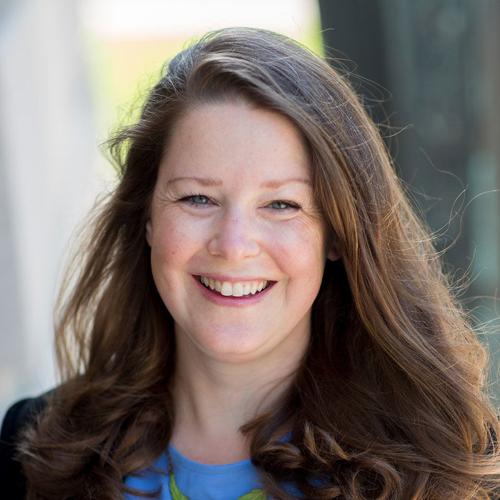