Nadine Ridley was in a dark place — but the sparks off a welding torch brought her out.

Ridley had been slowly working toward a liberal arts degree at Madison Area Technical College. But after the birth of her two sons, ages 1 and 3, Ridley battled post-partum depression and felt like motherhood was overtaking her individuality.

A switch to MATC’s welding program, though, has helped Ridley find herself while nearly doubling her salary potential. She’s part of a growing trend of more women training to become skilled trades workers.

At MATC, close to a third of those in the welding certificate program are women, and the metal fabrication program has two female students out of 36.

Six women are enrolled in MATC’s construction and remodeling program, a diverse department that boasts a dozen students who are people of color and others who identify as LGBTQ or have physical or neurological disabilities.

An increase of women seeking careers in the skilled trades comes at a time when worker shortages abound. U.S. Census data shows that a quarter of manufacturing and construction workers were over the age of 55 at the end of 2021.

Skilled trade shortages are expected to continue. The American Welding Society predicts the U.S. will be short 336,000 metal workers by 2026, and 40% of construction workers are projected to retire in the next decade, leaving 430,000 jobs open.

As Ridley, a Black woman, prepares to enter the welding industry — which has a worker population that is 96.5% male and 85% white as of 2021 — she’s eager to buck the stereotypes.

When construction and remodeling instructor Sandy Thistle first entered the carpentry industry in the late 1990s, she got a cold reception from her coworkers, who were mostly male.

Carpentry was Thistle’s second attempt at finding a career that fit. As a former gymnast and an avid outdoorswoman, Thistle recalls, carpentry piqued her interest: It allowed her to be outside and develop mental stamina as her arms grew tired from putting in screws above her head.

It was that stamina, or maybe sheer stubbornness, Thistle explained, that kept her in the industry as male coworkers looked down on her or would disregard her expertise because of her gender. Now, as an instructor, Thistle said she works to create a welcoming environment from the start.

Thistle’s support network was the other women in the apprenticeships — for her students now, it’s everybody, she explained.

“I feel like that’s one of the things our program does, is it takes folks who are outliers in this in the trades industry and provides them with a super solid foundational skill base and knowledge so that they can go out there and be competitive and successful,” Thistle said.

Welding instructor Hannah Wolf has a similar philosophy. She teaches beginning welding classes, where she instills that the craft is more approachable than some might expect.

Growing up, Wolf dreamed of being a horse veterinarian, and later she earned a degree in addiction psychology before realizing any job she wanted required a master’s degree — and additional debt. She had welded just once before, as a junior in high school, before starting MATC’s program.

Wolf often sees herself in her students, the ones whose optimism turns to fear as soon as they realize that the only thing standing between them and wielding a torch is a one-hour presentation on how not to light yourself on fire.

But in the end, there’s no gender criteria in the rubric, Wolf said.

“I hear so often, ‘I can’t, I can’t possibly do that,’” Wolf said. “A lot of times, we as women, we like crafts, right? You’ve run a hot glue gun before. You didn’t really think too much about that — you plugged it into the wall, you held the two things and you (glued it). Congratulations, that is a weld.”

A Madison native, Neumaier worked in fashion design in New York City for a decade. Then the COVID-19 pandemic hit, and Neumaier moved home and her full-time job was reduced to freelancing.

Neumaier had already been contemplating metalwork as a new career. A scant selection of textile jobs in Wisconsin made the decision to switch easy.

Neumaier is the only woman in her metal fabrication cohort at the Truax campus. She leans on her experience of being a blacksmith’s apprentice in high school, which helped her pay her way through fashion school years ago.

“It really felt like I had made the right decision, from a sense that I really enjoy working with metal and I enjoy taking things from 2D to 3D,” Neumaier said. “There’s so much that metal can do that fabric can’t.”

And while Ridley is learning to weld to regain her sense of self, it’s also to provide a better life for her sons. Ridley makes $13 an hour juggling two jobs, full-time school and family life. When she graduates from the program, she has better-paying options. Her top choice is one that would pay her $24 an hour.

At that income, Ridley would be able to set money aside for her children’s futures and access other opportunities for her family.

“After you have a kid, it can be really hard. You can feel like you don’t have a place in the world outside of being a mom,” she said. “But when you step outside of being a mom and go back to the person that you used to be, (it’s) ‘She has a lot of courage, she’s powerful, she pushed out a child, she could do anything.’”

In the weeks before I joined the Wisconsin State Journal in September, I was told this: Remember that a higher education institution is like their own city. It has its own character and struggles, defined by the students who learn there and the faculty who teach them.

I have seen this over and over again, and it was particularly clear when I visited UW-Platteville at Richland a week after the University of Wisconsin System ordered degree-fulfilling classes to cease because of low enrollment. During my visit, I found many of the devastated students to be emotionally invested in their campus community — and committed to saving it.

It's why Richland Center grieving the loss of its once-vibrant campus is my top story of 2022.

UW-Madison has its own slate of issues. There, a growing population is pitted against on- and off-campus housing availability. I wrote about the tactics used to clear returning students out of the dorms to make room for freshmen, and the frenzy that ensued as students put their lives on hold to secure housing for next fall.

At Madison Area Technical College, a key issue is how to alleviate barriers their students face just to get into the classroom. Finding adequate child care is one of them — I wrote about the efforts to expand future access at the Goodman South Campus and its four rural campuses.

Much of my beat is hard news, but some of my favorite stories are features of students who make up the character of campus. I wrote about Kirstan Gimse, the student commencement speaker who's achieving her dream of being a scientist that she saw as unattainable.

I'm looking forward to diving deeper into the beat in 2023 and am so grateful for the support of State Journal subscribers that allows me to be one of the few reporters in the state dedicated solely to covering higher education.

After budget cuts and consolidations, the campus' enrollment is down 90% from 2014, and UW-Platteville was ordered to shutter the campus.

UW-Madison offers students free meals, free housing or $5,000 to move out of dorms

With record enrollment contributing to the housing crunch, UW-Madison lured students out of dorms by offering incentives to live elsewhere.

Management companies are seeing some of their housing in prime areas sell out three to four weeks faster than previous years.

A new Early Learning Center that opened in 2021 at MATC's Truax campus doubled capacity, and a facility at the Goodman South campus could be next.

From GED to Ph.D.: UW commencement speaker Kirstan Gimse achieves dreams of being a scientist

UW-Madison doctorate student Kirstan Gimse found the courage to go back to school a decade ago from a chemistry professor she would wait on.

A 75-year-old priest is still missing six months after he walked away from his apartment in southeastern Wisconsin retirement community.

A company that operates a Dodge County wind farm is investigating what caused part of a wind turbine and its blades to plummet to the ground, …

The skills of the Ojibwe Winter Games 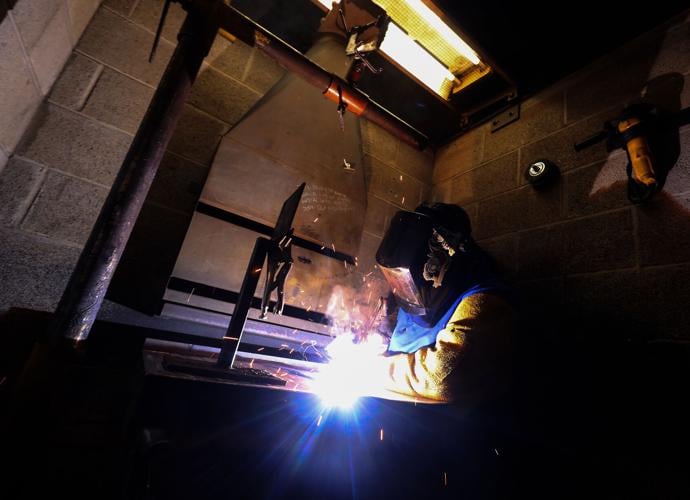 Madison Area Technical College metal fabrication and welding student Nadine Ridley performs a spot welding exercise during a class. Ridley said welding has helped her reclaim her sense of self after becoming a mother of two boys, ages 3 and 1. 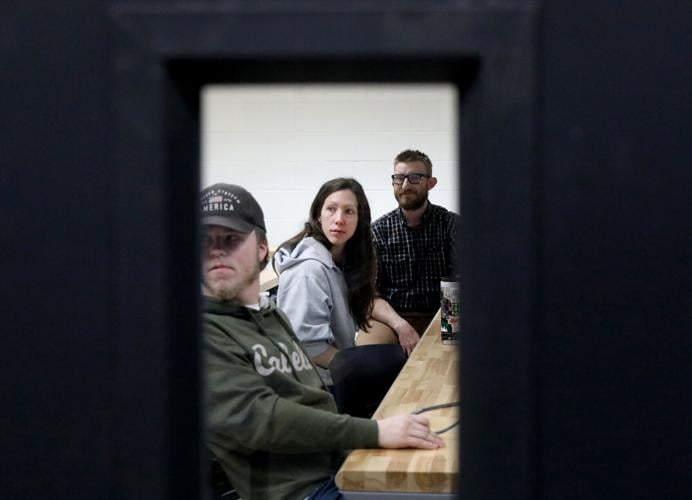 Amanda Neumaier, a metal fabrication and welding student at MATC, listens during a classroom discussion. Neumaier is taking her career in a new direction after spending a decade working in fashion design. 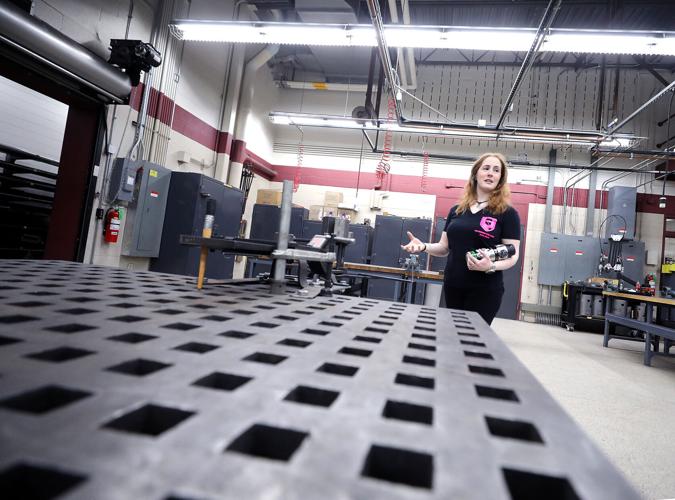 Hannah Wolf, metal fabrication/welding instructor at MATC, in one of the program’s workshops. Wolf was in the school's welding program not long ago after opting to change careers rather than sink further into debt for a master's degree. 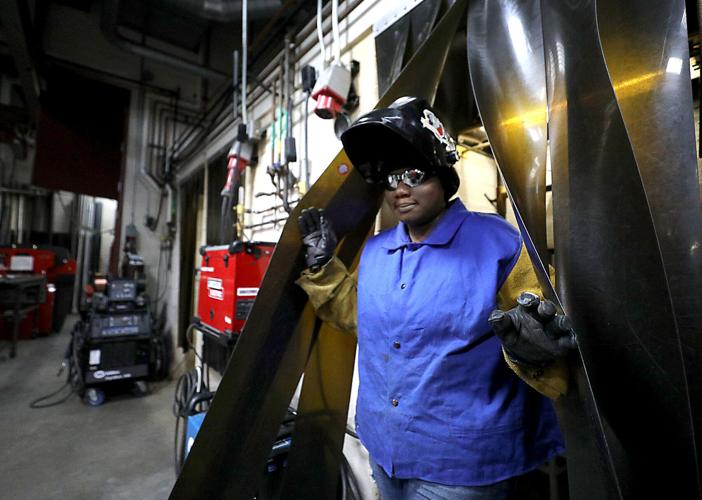 Nadine Ridley, a metal fabrication and welding student, exits her work booth during a class at MATC. Ridley's children are her biggest motivation, and she hopes getting her certificate will allow her to put aside money for their futures and give them better opportunities. 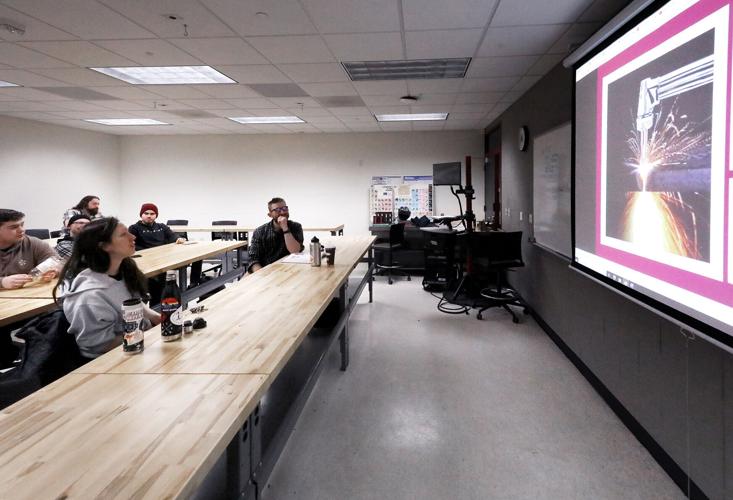 MATC metal fabrication and welding students, including Amanda Neumaier, left, listen during a classroom presentation. Neumaier hopes to go into metals design after completing her program. 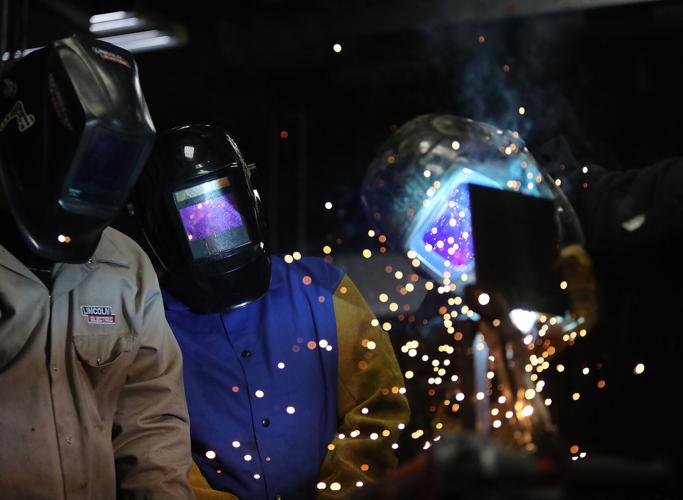 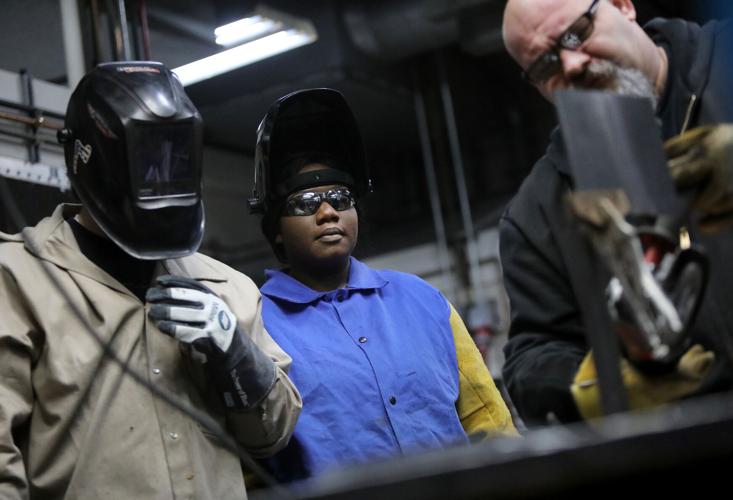 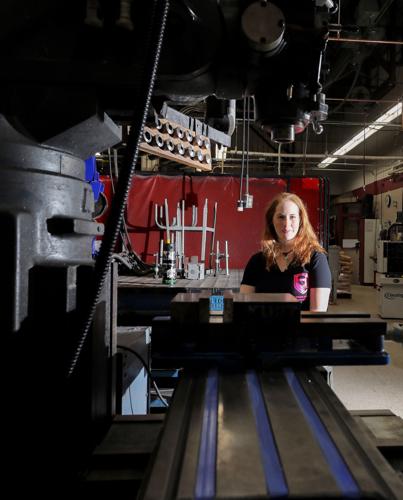 Hannah Wolf, metal fabrication/welding instructor at MATC, has tried to reframe the trades as something everyone can do. If you can run a hot glue gun, you can learn to weld, she says.