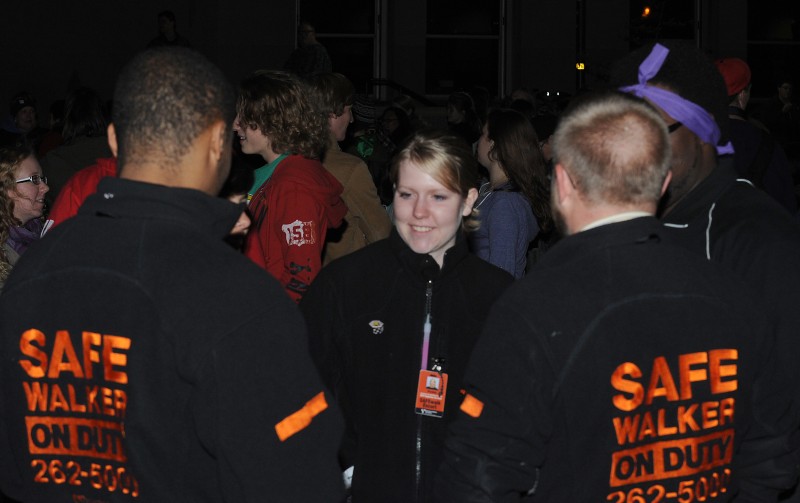 Alyssa Provencher (center) and other Safe Walkers attend the LGBT vigil. SAFEwalk provides walking escorts to LGBT and all others, alike, in much of the UW campus area.
DEVIN ROSE | | 608-252-6143

Gabe Peeples didn't act very girly as a child, but wore feminine clothing and was teased in school. Aiden Caes was spat on and run off the road as a teenager.

According to others who spoke at a vigil on a chilly Wednesday evening on Library Mall, treatment such as this toward people who identify as lesbian, gay, bisexual, transgender or questioning has not improved.

Amid the glow of small purple lights, with many people sporting purple shirts and armbands, dozens of students and Madison residents gathered to recognize the effect of bullying that has led to suicides among gay teenagers.

The Stop the Silence vigil, which began in 2008, is held to acknowledge the prevalence of bullying, harassment and homophobia, said Kassie Brown with the UW-Madison LGBT campus center, which held the vigil.

Brown said when the country allows homophobia to permeate popular culture and doesn't recognize rights such as allowing everyone to marry the person they love, bullying is unavoidable.

"We are clearly still recognized as second-class citizens," Brown said.

Some participants who shared their stories said it took time to realize their sexuality or gender, and friends weren't always supportive.

Peeples lost many friends, but "for the most part, I can laugh off harassment now." Peeples added it's almost more disheartening for transgender women, whose deaths are not often publicized in the news.

Lori Berquam, UW-Madison's Dean of Students, said that as a lesbian, she has had experience with bullying. But her nephew living in a small town had to drop out of high school because he was shoved, urinated on and punched so relentlessly he had a bruise on his arm for months.

The idea behind the vigil is to challenge everyone to interrupt such bullying, Berquam said.

Another hate-crime incident occurs at UW-Whitewater

The incident happened Sunday night when a man shoved a student and called her gay. It follows an incident in September when a student was punched because of a shirt she was wearing.

Alyssa Provencher (center) and other Safe Walkers attend the LGBT vigil. SAFEwalk provides walking escorts to LGBT and all others, alike, in much of the UW campus area.
© Copyright 2021 Capital Newspapers Inc., madison.com , 1901 Fish Hatchery Rd Madison, WI | Terms of Use | Privacy Policy
Powered by BLOX Content Management System from TownNews.com.
You don't have any notifications.