One professor threatened to stop funding several of his graduate students. A postdoctoral researcher saw his extensive work on a paper diminished when his adviser put her name above his own. Another budding scientist struggled to find a job after her professor offered negative references to prospective employers.

These troubling accounts of academic bullying on the UW-Madison campus show the problem extends beyond what Ph.D. candidate John Brady endured under an abusive adviser before dying by suicide in 2016. Situations like his can often be written off as awful anomalies, experts say, but that sort of thinking is misguided in a work environment where professors wield uneven power over the students they supervise. For every student like Brady, there are a number of others who suffer in silence or leave academia altogether.

The problem exists at most research universities, but takes on increased importance on a campus that consistently ranks among the top doctoral-granting institutions.

Academic bullying, a shorthand for what UW-Madison formally refers to as “hostile and intimidating behavior,” is broadly defined as unwelcome behavior so pervasive or severe that it impairs another person’s ability to carry out their work responsibilities.

It can present in different forms with repeated ridiculing, shouting and intimidation among the most obvious examples. The behavior can also include more subtle forms of misconduct, such as veiled threats, impossible workloads and undermining of career prospects. Some actions fall into a gray zone, but experts say bullying goes beyond students being unable to handle the pressures of graduate school.

A Wisconsin State Journal investigation identified nine employees, including Brady’s adviser, who were investigated in the last six years for violating the university’s policy against hostile and intimidating behavior. According to the newspaper’s review of the records:

Chancellor Rebecca Blank said she would like to believe bullying isn’t common on campus and that the overwhelming majority of graduate students develop positive relationships with their advisers.

UW-Madison considers itself ahead of the curve in addressing academic bullying, with extensive policies spelled out for specific employee groups, a dedicated website bringing visibility to the problem and resources on how to address it.

Other Big Ten schools tend to lump behavioral expectations into ethics codes or general workplace policies, according to a UW-Madison policy review officials shared with the newspaper. Some institutions offer short descriptions of their standards. The University of Iowa, for instance, said faculty should “demonstrate respect” toward students and “avoid exploitation.”

An academic paper published last fall highlighted “encouraging” work underway at a handful of institutions that are “not only increasing awareness but actually cultivating policies and practices designed to curb bullying.” UW-Madison was one of three cited.

Reprehensible but not illegal

Similar to sexual assault and harassment, bullying is an enduring problem in academia that will likely persist for decades to come. Cases are often complex, open to different interpretations and the institution’s response can leave both sides feeling unsatisfied.

But bullying differs in a few key ways. The #MeToo movement brought attention and awareness to the issue of sexual violence. Bullying has had less of a national reckoning.

The topic has come up just once or twice among Big Ten leaders, Blank recalled, whereas sexual assault gets “a lot of conversation.”

Mahmoudi, who experienced bullying earlier in his career and co-founded an antibullying nonprofit called the Academic Parity Movement, said bullying is more common at highly ranked universities. That’s because professors at top-tier institutions land larger grants and students are more willing to justify enduring abuse in exchange for prestige or out of fear they can easily be replaced by another student.

International students are among the most vulnerable because they lack a nearby support system, rely on a student visa to stay in the U.S. and struggle with cultural or language barriers, he said. Students further along in their programs are also less likely to speak up, seeing little opportunity to change their circumstances without losing years of work.

Part of why addressing this behavior is so vexing, Mahmoudi said, is many cases lack clear documentation. Bullies are clever, don’t put threats in writing and tend to taunt individuals behind closed doors. Sometimes bullies can recruit individuals to their side, making investigative conclusions more difficult to draw.

All members of the scientific community — from university administrators to funding agencies to journal editors to colleagues of the accused — need to involve themselves in confronting the problem, he said.

In the wake of Brady’s suicide becoming public, UW-Madison pledged to track reports of hostile and intimidating behavior at the central administration level so they “do not simply remain hidden inside a department or unit,” Blank said in 2019.

All complaints now go to dean’s offices at the school or college level, she said this month. Deans are the “right place” for reports to be housed because they are the “frontline troops” in documenting allegations, investigating complaints, recommending actions and monitoring behavior.

If the behavior appears egregious enough to warrant discipline or dismissal, the case is referred to the Provost’s Office. In the last five school years, eight cases have been investigated and substantiated at that level, according to UW-Madison data.

Tackling the problem from an institutional perspective is less an issue of resources and more about creating the right culture, Blank said.

“This is not a one-way power street,” she said. “This is a relationship that should have respect on both sides. Making sure that all faculty understand that after they arrive, regardless of where they’ve come from, regardless of how they might have been treated as a graduate student, is an issue of expectations and culture and training.”

Training, however, isn’t required. UW-Madison “strongly encourages” employees who work with graduate students to complete the training, Blank said, but the university stops short of a campuswide mandate because some staff don’t interact with students.

In-person training launched in 2018 and has been offered to nearly 2,700 people. An online training is under development.

How common on campus?

Surveys sent to all UW-Madison faculty in 2016 and 2019 offer a snapshot of how prevalent bullying may be on campus, at least from professors’ perspectives. Response rates ranged between 53% and 59%.

More than a third of faculty who responded to the 2016 survey reported personally experiencing hostile and intimidating behavior within the past three years and more than 40% witnessed such behavior.

Rates increased when the survey was sent out again in 2019. Almost 40% of faculty said they experienced bullying and nearly 50% witnessed it within the past three years.

The increase may, in part, be because more faculty were familiar with hostile and intimidating behavior as a concept in 2019. They were also more likely to say the behavior is treated seriously on campus and report knowing how to respond when someone brings a bullying complaint to them.

A global academic study backs up that observation, concluding that bullying was less frequent during the pandemic but with a higher level of severity.

As the pandemic moves into a more manageable stage, Ombud Rick Nordheim told the Faculty Senate in December that the office is starting to see cases pick up again.

A UW-Madison graduate student's suicide in October 2016 sparked a university investigation into the faculty member at the center of the lab where the student worked. University records describe College of Engineering professor Akbar Sayeed’s lab as "toxic" and his behavior as "abusive." State Journal reporter Kelly Meyerhofer writes about the university's report and fallout from the initial story, including Sayeed's reassignment and UW-Madison's plans to start centrally tracking bullying complaints.

Kelly Meyerhofer has covered higher education for the Wisconsin State Journal since 2018. She grew up in Lake Geneva, graduated from Marquette University and previously worked for The (Hilton Head) Island Packet in South Carolina. Contact her at: kmeyerhofer@madison.com, 608-252-6106.

UW-Madison recommended the professor be monitored but most students couldn't recall that happening, calling into question the level of oversight applied.

Despite UW-Madison confirming 30 allegations of abuse and bullying, the USDA lets the former professor run a lab out of the agency's Madison office.

Four months ahead of the launch and amid national healthcare worker shortages, states are scrambling to ensure they have adequate and robust staffing to field the onset of calls.

About 75 percent of graduate economics students recently signed a letter advocating for seven reforms after allegations of misconduct surfaced on social media.

Snow is for the dogs

Snow is for the dogs

A 20-year cheddar is revealed

A 20-year cheddar is revealed 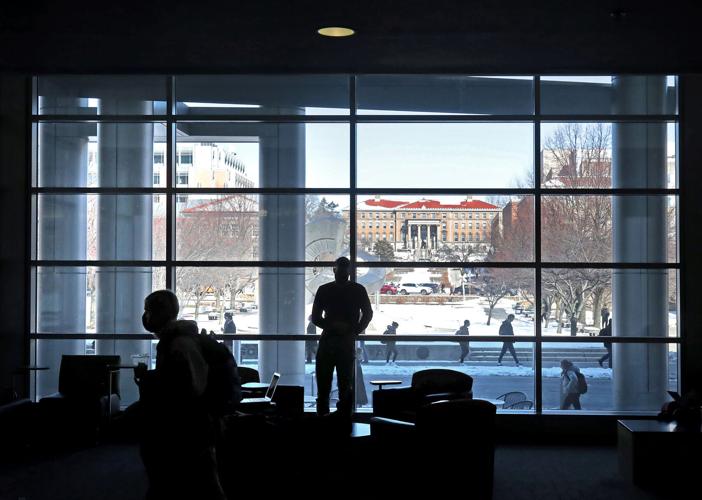 UW-Madison students gather in the lobby of Engineering Hall. The College of Engineering has received several bullying complaints in the past six years. 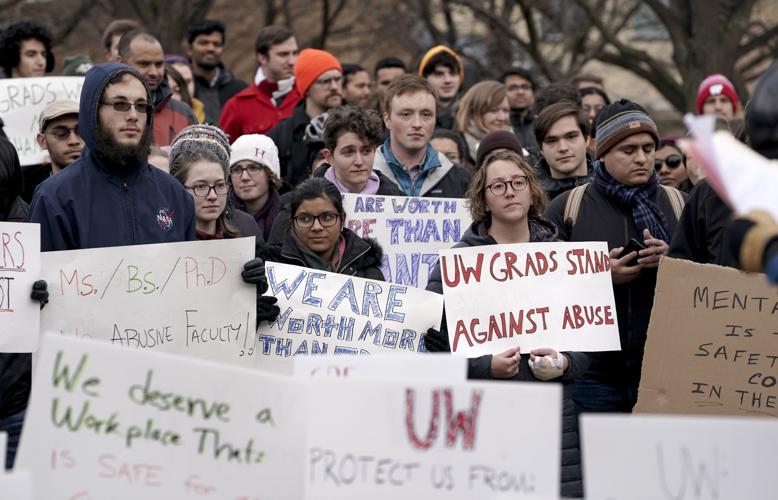 UW-Madison graduate students protested in 2019 after learning about the suicide of Ph.D. candidate John Brady, who worked under an abusive adviser, according to a university report. 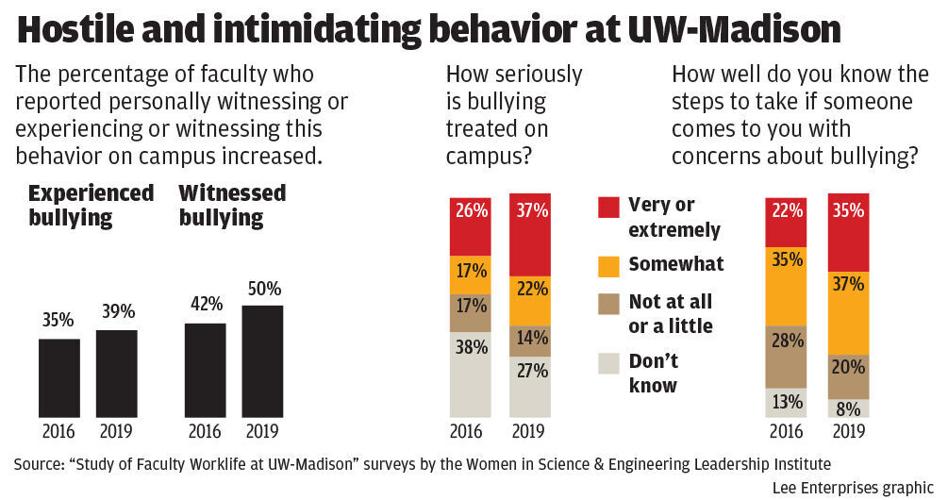 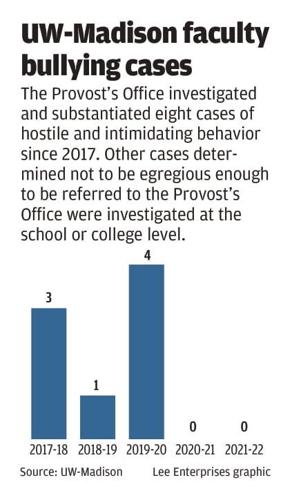 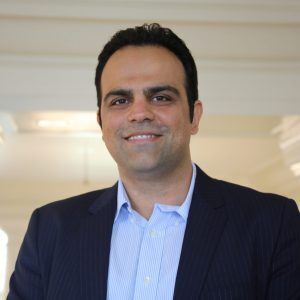 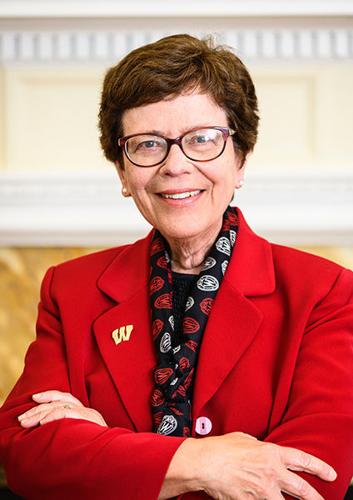