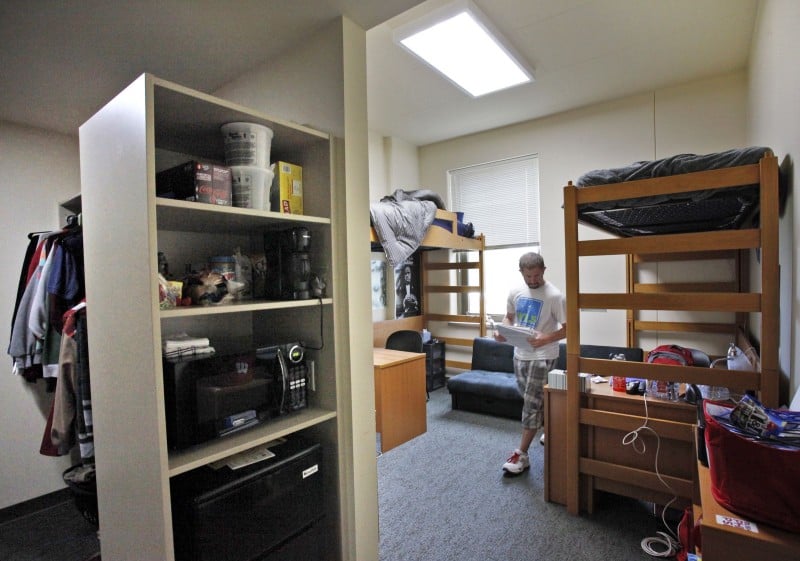 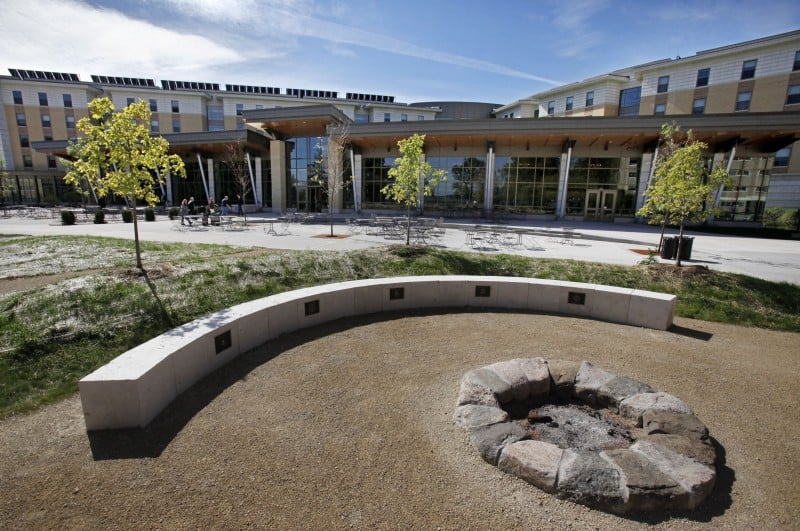 A fire ring sits outside UW-Madison's new Dejope residence hall between the building and Lake Mendota. University officials consulted the state's 11 American Indian tribes about the ring, which includes plaques recognizing each tribe. Students use the fire pit for bonfires. 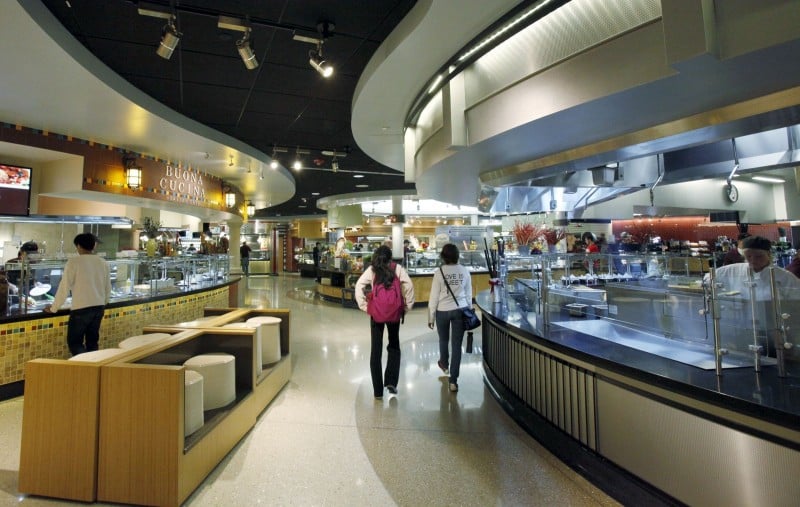 An array of dining options is available in UW-Madison's new Dejope residence hall. Students and staff from throughout campus may take advantage of the food at the dorm's cafe, shown here. 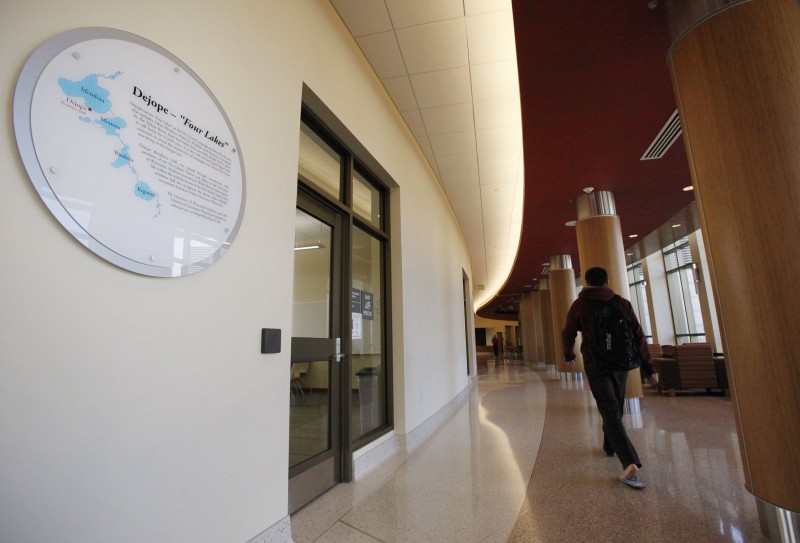 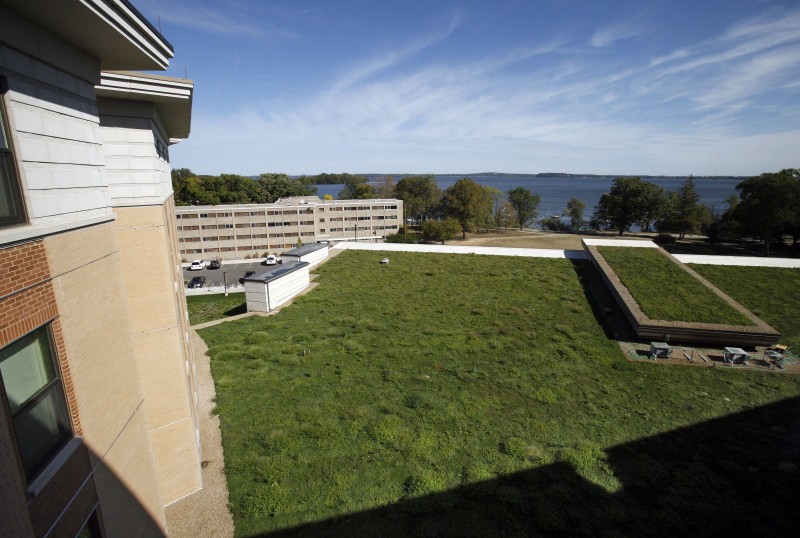 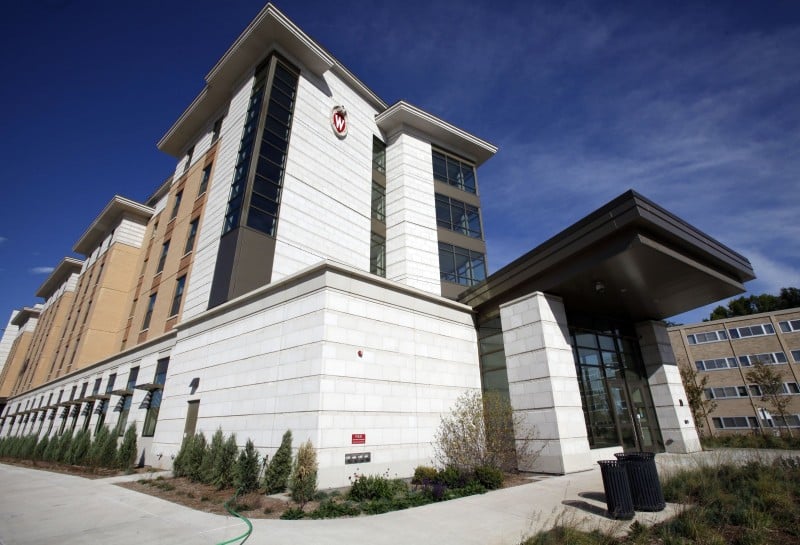 Andrew Uehling wakes up to a green-blue view, with a carpet of rooftop grass in the foreground and the waves of Lake Mendota in the distance as he looks out the window of his dormitory.

"I like the closeness to the water," he said. "It's awesome."

A freshman biomedical engineering major at UW-Madison, Uehling lives in the university's futuristic $47 million new lakeside dormitory, Dejope Residence Hall. Officials named it to honor the Ho-Chunk American Indians who lived here long before European settlers. Students who've lived there since school started in early September have other names for it.

"It's the Taj Mahal of Wisconsin," said Uehling, of Shullsburg.

"It's a palace," said Elisha Smith, a junior house fellow from Chicago.

"It's like a hotel," said freshman Erica Servais of Green Bay, who lives across the hall from Uehling.

With its five stories, wall-sized windows that look out over the lake, eco-friendly features and sprawling design, the dormitory resembles little of the austerity of the lakeshore dorms that surround it, all built in the 1930s or 1950s. Its opulence reflects societal shifts since then and a dramatic upgrade in students' expectations for what a dorm should be.

Another lakeshore dorm, this one much smaller, is scheduled to open next fall and mostly eliminate a waiting list for on-campus housing that is still about 200 students long, said Jeff Hinz, assistant director of university housing.

"The phrase that our members use is the 'amenities war,'" said James Baumann, communications director for the Association of College and University Housing Officers.

Dejope, which houses 408 freshmen and sophomores on four floors, comes well-armed. Each room, shared by two students, features its own thermostat. Students sleep on lofted beds, like in previous generations, but under significantly higher ceilings that offer more space. The closets are bigger, too, and there are changing areas for increased privacy.

A walk down to the main floor provides access to a sprawling cafe, a convenience store, a coffee shop selling Starbucks coffee and Ben and Jerry's ice cream, a health clinic, a laundromat, a classroom where the university offers courses and a lounge where students can sit by a fire, the lake in full view beyond.

"It really goes to the idea of breaking down the traditional walls between all these different pieces of campus," Baumann said.

In one way, the dorm resembles earlier generations of dorms: the students share bathrooms, with 10 to 12 per facility. UW-Madison officials said their students, in surveys, have indicated they like the community formed by living with a roommate and sharing a bathroom. Hinz said it also comes down partly to cost.

Hinz said that while the university received no donations from the Ho-Chunk tribe for the building, they decided to honor the tribe's heritage by naming it Dejope, a Ho-Chunk word for "Four Lakes" used to describe the Madison area. Plaques and artwork throughout the building pay homage to the state's American Indian history. Hinz said officials hoped that students would be enticed to learn more about American Indian history in Wisconsin.

He said officials also hoped to make the campus more welcoming to American Indian students, who comprise less than 1 percent of the university's 42,000 students.

Servais, the freshman from Green Bay, recently discovered another amenity: the fire pit. Between the dorm and the lake, university officials installed a fire circle, ringed by stones bearing bronze plaques with names and information about each of the state's 11 American Indian tribes.

The university provides firewood for gatherings, which Servais and her floormates recently took advantage of for a night of flames and camaraderie. A look at the pit recently suggests plenty of other students have used it as well, with charred wood and a pile of cigarette butts all that remained.

Former Chancellor Richard Wells, 72, and former vice chancellor of administration services Tom Sonnleitner, 79, pleaded guilty to one count each of misconduct in office.

Willis is credited for the "Friends" theme song and the song "September" by Earth, Wind & Fire.

'No one shows a child the sky': Mae Jemison embraces MLK legacy of radical action in memorial address

Jemison has been inducted into both the National Women’s Hall of Fame and the International Space Hall of Fame.

A fire ring sits outside UW-Madison's new Dejope residence hall between the building and Lake Mendota. University officials consulted the state's 11 American Indian tribes about the ring, which includes plaques recognizing each tribe. Students use the fire pit for bonfires.

An array of dining options is available in UW-Madison's new Dejope residence hall. Students and staff from throughout campus may take advantage of the food at the dorm's cafe, shown here.