Earlier this fall, students waited hours to sign leases for housing they felt were affordable. Some students are maxing out their housing budgets after working all summer. As of last week, University Housing had a waitlist of 2,400 for 1,000 beds for returning students.

But thus far, all UW-Madison has is anecdotes, not data, to define the student-housing problem.

A new collaboration between the city of Madison, UW-Madison departments and the UniverCity Alliance — a network of local government researchers and experts at UW-Madison — aims to change that.

The result should be a study, ready for release next fall, that details the availability of off-campus housing and students’ ability to pay for it.

“We don’t know how bad the issue is,” Gavin Luter, UniverCity Alliance managing director, said. “Right now, we have no common facts. All we have is a couple of figures that show how much students have for their financial aid, how much on average they are paying, according to financial aid, but that’s about it.”

The study will be modeled after a University of California-Davis housing study, where students were asked 68 questions about where they lived, crowding, housing quality and affordability. It will be led by Revel Sims, an associate professor of housing and community development.

The Madison City Council approved $9,300 in funding for the study in November. Ald. Juliana Bennett, who represents the 8th District, which includes a large portion of the UW-Madison campus, proposed funding for the study and has also pushed for changing the city’s tax incremental financing language to allow more flexibility for student housing.

Previously, developers could only receive tax incremental financing if there was a “significant affordable component” to a project.

The current off-campus housing market puts students in a bind, Bennett said. Faced with signing leases in October, students often have to decide between nicer housing at a premium or aiming for something more affordable that hasn’t been well maintained.

Bennett has heard stories from constituents and experienced the rental housing market herself, when she’s debated between sharing a room and “living in a closet.” But hard data is hard to come by, she said, adding she hoped the study could help the city and the university work together to address the problem.

“This study is to answer the speculative questions,” Bennett said. “I could tell you, in my view, that we are in our affordable housing crisis, and in my view, what situation students are facing. But it’s a lot of speculation about the current situation we’re in.”

In most cities with Big Ten schools, the university is the predominant entity. The style of off-campus student housing in those cities mirrors that of Madison, with a key difference: Rents can be hundreds of dollars a month cheaper elsewhere, UW-Madison Professor of Urban Planning Kurt Paulsen said.

At University of Nebraska-Lincoln, rents can be as low as $330 a month per student for a 3-bedroom apartment; near University of Iowa, students might pay an average of $500 to $600 a month. There are more-expensive leases available, but few reach the level of UW-Madison’s off-campus market, where students pay an average of $940 a month, with some one-bedroom apartments in “luxury” complexes costing upward of $2,300 a month.

Contributing to higher off-campus student housing rents is the fact that students are not the only people clamoring to live Downtown, Paulsen said. They’re up against young professionals who want to live in a densely populated environment and service workers who want easy access to jobs in the area.

Add the fact that University Housing was nearly pushed to its limit this year with a record-breaking freshman class size, with no new dorms requested for the upcoming state budget cycle.

UW-Madison offers students free meals, free housing or $5,000 to move out of dorms

With record enrollment contributing to the housing crunch this year, UW-Madison lured returning students out of the dorms by offering financial incentives to live elsewhere.

Further exacerbating the problem is that Madison and Dane County haven’t kept pace with developing new housing to meet their growing population needs, Paulsen said. Over the last 15 years, Dane County has added 57,000 households, but only grown by 46,000 housing units, Paulsen said. 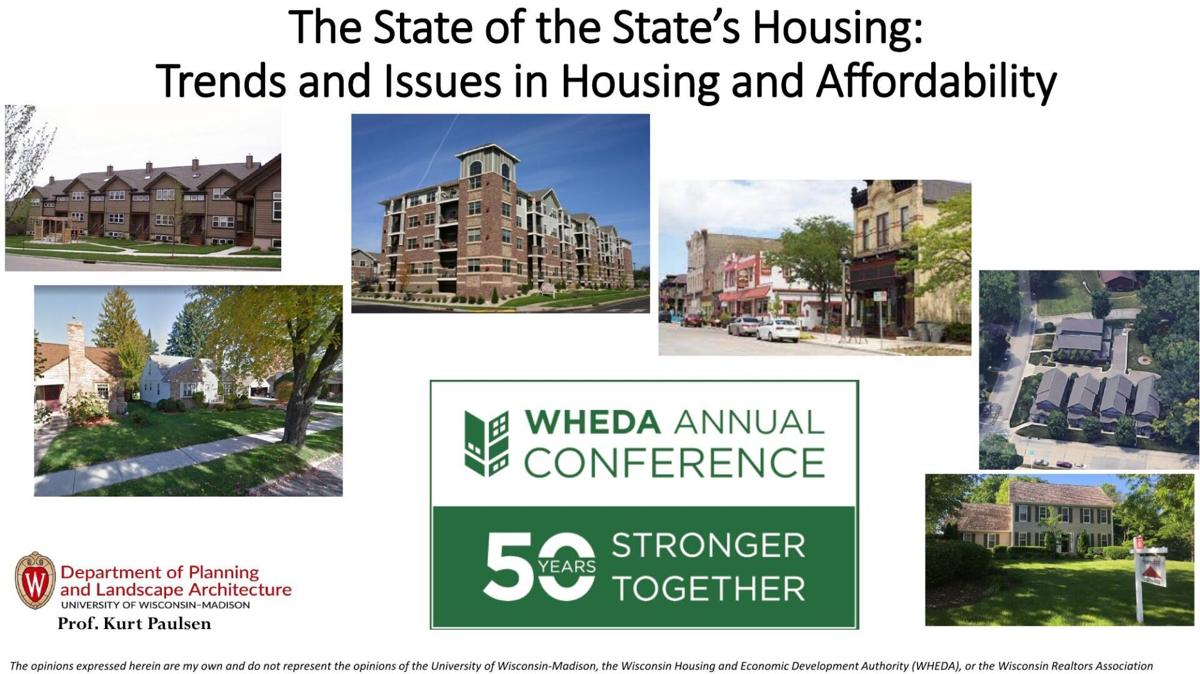 Many higher-income people are also opting to stay in apartments rather than buy homes, which puts more pressure on those who rely on rentals, Sims said.

“This is all part of the dynamic of just very little housing options for students, and in this particular moment, it just seems like a crunch, like there’s just nothing available and students are really feeling it more so than ever,” he said.

Students in the city

One in eight Madison residents is a UW-Madison undergraduate student. But the city’s comprehensive plan doesn’t account for growth in student housing.

That’s a problem, because the comprehensive plan “is a framework to address any of our problems,” Bennett said.

East of campus, where many of the off-campus housing developments are going up, areas are marked as either high-density residential or Downtown mixed use. No areas are identified as student housing.

Completing the UniverCity Alliance’s study and knowing the needs is a first step to remedying those issues, Bennett said. Developing stronger ties between the city and UW-Madison is another, as Bennett said she feels some of her fellow council members dismiss students as “privileged white kids.”

“I hope that narrative changes, to be recognizing that the city wouldn’t be where it’s at today without the contributions of the students who live in this city, and we started working together more,” she said.

With the lure of free housing, hundreds of UW students apply to be resident assistants

University Housing has seen abnormally high interest this year, both in housefellow applicants and the number of returning students interested in living in the dorms for another year.

'This is going to end up in court': Community members sound off on UW-Platteville at Richland campus' future

Thursday's listening session let community members share ideas on how to revive the Richland Center campus, or at least keep it on life support.

Irwin Goldman, along with research partner Nick Breitbach, created a less earthy plant named the Badger Flame Beet. They tasted thousands of beets to create it.

113-year experiment at UW-Madison ends this year. It will be crushing

The new center extends the work of the Public History Project, the entity behind the popular "Sifting and Reckoning" exhibit at Chazen Museum of Art last fall.

University of Wisconsin System bans TikTok use on system devices

Nearly half of the states have blocked the popular social media app owned by a Chinese company.

Photos of salted walking paths and parking lots at UW-Madison renewed a debate about the balance between water quality and roads clear of snow.