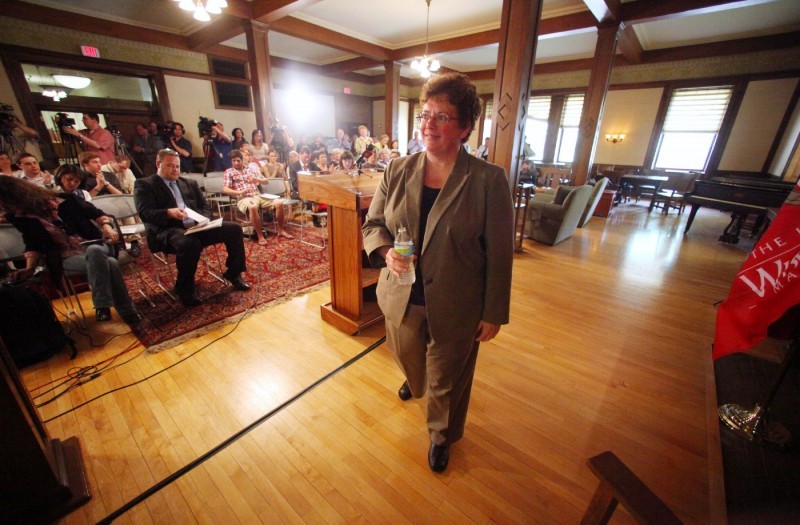 UW-Madison Chancellor Biddy Martin leaves the podium after announcing her resignation from UW-Madison. "I leave both with a heavy heart and with a lot of excitement about the great opportunity Amherst represents," she said. 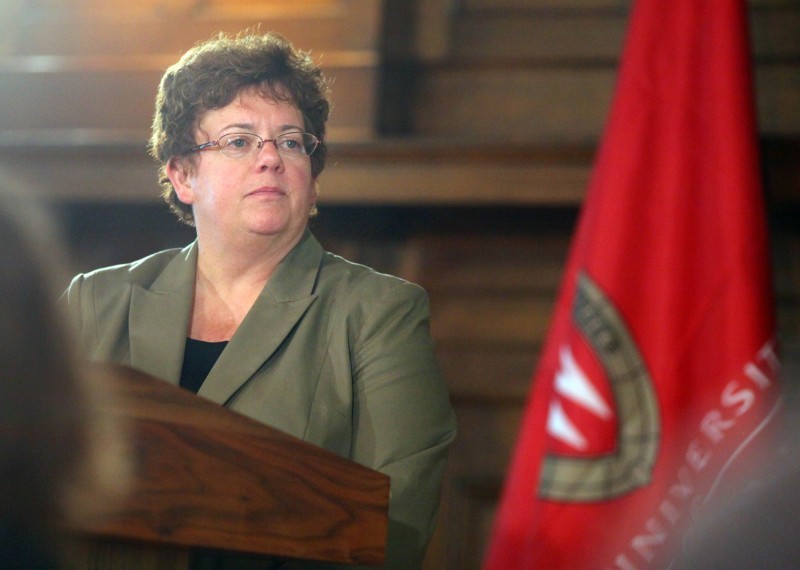 UW-Madison Chancellor Biddy Martin announces her resignation at a news conference Tuesday in Lathrop Hall. She is leaving to become president of Amherst College.
DEBORAH ZIFF | | 608-252-6234

After suffering a recent defeat in her effort to split UW-Madison from the University of Wisconsin System, Biddy Martin announced Tuesday she will leave the university after three years as chancellor to become president of Amherst College.

UW System President Kevin Reilly said there was no move by him or the UW Board of Regents to remove Martin from her post.

"It's been kind of a bruising fight," Reilly said. "I can understand someone thinking there are opportunities elsewhere."

Martin, 60, said that Amherst sought her out and the college's offer was a "great opportunity at a great time."

"I leave here, of course, with great sadness," she said. "I thought I might spend the rest of my career here."

She will assume the presidency at the prestigious private liberal arts college in Amherst, Mass., at the end of August.

Reilly said he will work with the Regents and UW-Madison officials to develop a transition plan and appoint an interim chancellor.

Martin was named chancellor of the state's flagship university on June 5, 2008, after serving as provost of Cornell University. It was a return to UW-Madison for Martin, who got her doctorate in German literature there in 1985.

In recent months, Martin tangled with Reilly and other leaders in the UW System as she pushed to split UW-Madison from the other 25 campuses in the system. The change, backed by Gov. Scott Walker, would have given UW-Madison new administrative freedom and its own board of trustees. Martin argued the university needed the new structure in the face of declining state aid.

Walker included the change in the state budget, but lawmakers removed it earlier this month after an outcry from other UW System leaders. Instead, the entire UW System will likely stay together and get some administrative flexibility.

"I'm not going because I'm disappointed in that outcome," she said at a news conference in UW-Madison's Lathrop Hall on Tuesday. "I think we did extremely well. I'm really proud of what we achieved together."

Reilly said he and Martin dramatically disagreed on the "substantive" issue of what structure the university should have. He credited her with elevating the issue in the eyes of lawmakers.

"I hired her," he said. "It started out as a very good relationship. Then we parted ways on a really substantive issue. We both rallied the troops on each side of the issue."

In Martin's three years as chancellor, she gained a reputation as a leader with big ideas.

She successfully pushed for a program called the Madison Initiative for Undergraduates, a tuition surcharge to support and improve the quality of education offered at UW-Madison. The program also increased financial aid for students.

She also strengthened the university's relationship with China, promoted the humanities and launched the "Go Big Read" common-reading project for campus.

Martin was also beloved by students.

"She was the students' chancellor," said Lori Berquam, dean of students. "She's so good at being in tune with them, listening to them, enjoying their joie de vivre — their love of life."

Students surprised her with a dance on her birthday, applauded her at sporting events and asked for their photos to be taken with her at snowball fights. She also appeared in the popular viral video "Teach me How to Bucky." Students wrote the song "My Biddy" and gave it to her on Valentine's Day.

"They don't make love songs for the chancellors of other campuses," said Erik Paulson, a graduate student who was on the committee that recommended Martin to the Regents.

As the 19th president of Amherst, she'll lead a significantly smaller campus. Amherst is a college of about 1,700 students, while about 29,000 undergraduates attend UW-Madison.

Martin said there will be different challenges at Amherst, with less focus on public funding and more on being an advocate for liberal arts education.

She declined to say how much she'll earn at Amherst, but a survey by the Chronicle of Higher Education found that current president Anthony Marx had a total compensation package of $589,281 in 2008-2009. She earns $437,000 in salary alone at UW-Madison. She said money did not play a role in her decision.

Paulson said he wondered whether Martin's departure is the cost for pushing change.

"It says, in some sense, you can accomplish things, but you have to be willing to risk it all," he said.

March 25, 2009: Calls for an annual $250 tuition surcharge — on top of tuition — on undergraduates from families making more than $80,000 a year. The amount goes up incrementally over four years, reaching $1,000 in the last year. The funds would pay for student aid and academic programs.

March 30, 2009: Martin signs an agreement with Tikrit University in Iraq to pave the way for a future academic exchange.

February 2010: The student viral video group Zooniversity releases the song "My Biddy," an ode to the chancellor. She later appears in "Teach Me How to Bucky," which becomes a YouTube hit.

April 9, 2010: Martin announces UW-Madison will end its licensing agreement with Nike because of alleged worker rights' abuses at two factories in Honduras.

Sept. 28, 2010: Martin presents President Barack Obama with a No. 44 basketball jersey during a campaign stop at UW-Madison, the first campus visit by a sitting president in 60 years.

October 2010: Martin begins promoting the "New Badger Partnership." The plan would give UW-Madison more autonomy from the System to manage its own construction projects, purchasing, faculty pay, tuition rates and need-based student aid.

Dec. 9, 2010: Reflecting on two trips to China in the past year, Martin tells the UW Board of Regents, "We're there to elevate the brand, not only of the university, but also of the state of Wisconsin itself."

May 2011: After it becomes clear the Legislature won't back splitting UW-Madison from the System, Martin looks ahead to backing a compromise.

June 14, 2011: Martin announces she is leaving the chancellorship for the presidency of Amherst College in Amherst, Mass.

The UW-Madison chancellor accomplished so much in so little time and will be missed on and off campus.

Chancellor cites "great opportunity that Amherst offers" as main reason for moving on.

Despite a turbulent chapter in UW-Madison’s recent history, there will still be plenty of interest from qualified applicants seeking to replace Chancellor Biddy Martin, experts say.

Biddy Martin began her public transition from chancellor of UW-Madison to president of Amherst College on Thursday when she appeared at a welcome event on the campus of the Massachusetts liberal arts campus.

Gov. Scott Walker vowed Monday to keep pushing for his plan to split off UW-Madison from the rest of the University of Wisconsin System, even after the state Legislature axed it from the two-year state budget.

UW System President Kevin Reilly lured former UW-Madison Chancellor David Ward out of retirement to serve as interim chancellor of the state’s flagship university, an effort to provide an experienced and familiar leader after a period of contentiousness.

Legislators officially killed plans Friday to turn UW-Madison into an independent authority, opting instead to give more flexibility to every campus in the University of Wisconsin System.

"First and foremost I would like to thank Biddy for her personal friendship. Beyond that, I respect the tremendous courage she exhibited by be…

UW-Madison Chancellor Biddy Martin leaves the podium after announcing her resignation from UW-Madison. "I leave both with a heavy heart and with a lot of excitement about the great opportunity Amherst represents," she said.