The university expelled Cephus last spring for violating the non-academic misconduct code following accusations from the women based on information and evidence it received at that time. A Dane County criminal jury, however, acquitted him of those charges earlier this month, paving the way for his petitioning to rejoin the university and football team.

UW-Madison Chancellor Rebecca Blank announced last week her decision to reinstate Cephus in a statement acknowledging some will disagree with her decision. She said she hoped nothing from the case would deter victims from coming forward.

The case has presented a lose-lose situation for UW-Madison with outrage coming from black community leaders before Cephus’ expulsion was lifted and now from the attorneys representing the women. Advocates for sexual assault victims have also warned of a chilling effect on future victims coming forward to report assaults.

Speaking publicly for the first time since Blank reinstated Cephus, the attorneys in a Wednesday statement called for further inquiry into UW-Madison’s “unprecedented” decision to let him back into the university.

It was not clear from the statement which agency or investigators would conduct the inquiry and the attorneys declined to clarify.

Rachel Sattler, who works for Legal Action of Wisconsin’s Crime Victims’ Rights Project, and private attorney Amy Bogost described the toll the case has taken on their clients and said the hostility has only increased since the verdict.

Cephus and his attorneys spoke with the press throughout the yearlong legal proceeding. The attorneys representing the women, however, instructed their clients to avoid the media out of respect for the integrity of the campus and judicial processes and for their own safety.

But that hasn’t stopped the vitriol spewing on social media, they said, with comments calling for the women to be expelled, raped, publicly stoned and even killed.

Sattler and Bogost wrote that they respect the jury process, but disagree with the results.

They also said the university’s reinstatement decision “undermines the credibility of the entire Title IX system at UW.”

Title IX refers to the federal law intended to protect students and employees on college campuses from sexual harassment and violence.

“The Chancellor’s sudden decision without adequate notice or explanation to our clients seems borne out of expediency for the school rather than due process,” the statement read.

Cephus’ attorneys, however, previously accused the university of dragging its feet in issuing a decision.

UW-Madison spokesman John Lucas responded to the fresh round of criticism by saying the university communicates with those who file a complaint throughout the process.

Lucas shared Blank’s earlier comments in which she said, “Our university continues to be prepared to listen and respond.”

He also pointed to a more recent message from the University Health Services (UHS) titled “UHS supports survivors,” which included resources, such as the Women’s Health Clinic and Survivor Services.

An attorney for Cephus, Stephen Meyer, did not immediately return an email and phone call seeking comment. His voicemail said he is unavailable all week. 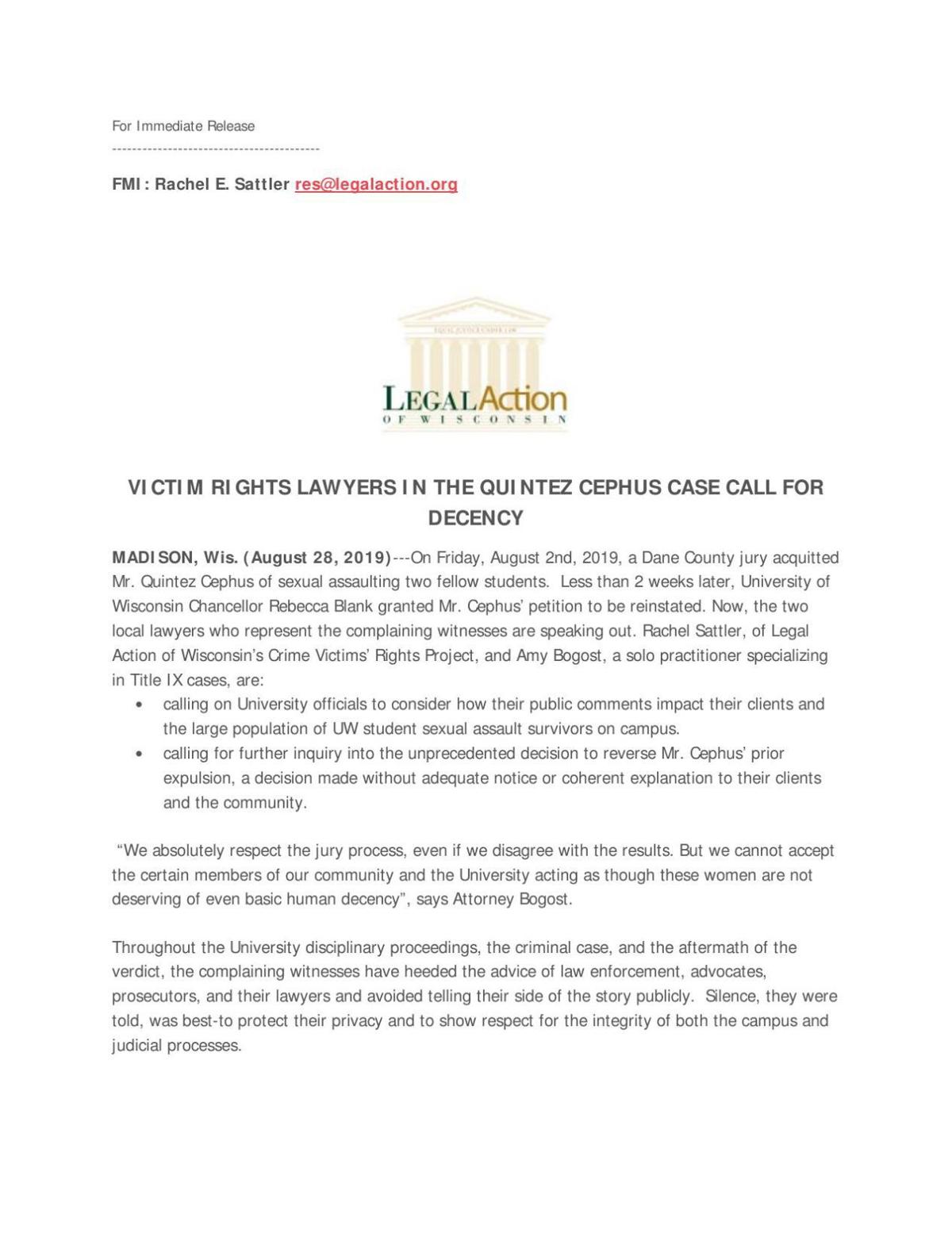 The area also could see large hail and damaging winds as a cold front passes through and kicks off storms, according to forecasters.