Watch Now: State officials update the public on the Wisconsin response to COVID-19

With the press of a button, nearly 200 emergency phones scattered across UW-Madison’s campus connect students, staff and faculty members to the police.

Factoring out the prank calls and misdials received in 2018, the UW Police Department tallied three legitimate calls that year. One of those was a person with a question. Another needed assistance locating their car.

None was a true emergency.

From the beginning of 2016 through Thursday, UWPD received about 575 calls, the overwhelming majority of which were pressed as a joke or by accident.

The university’s statistics reflect a national trend in the declining use of emergency phones, also known as “blue lights,” on college campuses.

“If I were to feel unsafe, that’s probably not the first thing I would turn to,” incoming sophomore Ray Jiao said of the campus emergency phones. He said he’d use his cellphone first.

About two dozen other UW-Madison students expressed similar views in recent interviews, but almost all support keeping the phones on campus despite how infrequently they are used.

Across the country, institutions are weighing what to do with the call boxes, according to John Vinson, president of the International Association of Campus Law Enforcement Administrators, the leading authority for campus public safety.

Some colleges are adding more emergency phones. Some are actively removing them, citing cost savings. And other schools, including UW-Madison, fall somewhere in the middle, with no plans to add or remove, but simply to maintain the existing phones.

“Folks can rest assured that these aren’t going anywhere,” UWPD spokesman Marc Lovicott said. “They are very underutilized and they are expensive, but it brings people a sense of safety and piece of mind to have them around.”

Every time a call is made, a UWPD officer is sent. And every month, officers test each phone to make sure all are working. The process takes about three hours.

Lovicott was unable to say how much the department spends in keeping the phones operational. And the university’s recent transition from traditional copper phone lines to data phone lines poses another question for UWPD.

The cost to upgrade the traditional lines running to each emergency phone is “significant,” Lovicott said. He added that keeping the copper lines is even more expensive in the long run because the phones use antiquated technology. He was unable to provide a cost estimate for either option and said the department is working with the university on a conversion plan.

A student-led petition last semester that drew about 1,800 signatures called for the installation of more blue lights on and near campus. It came after two assaults were reported off campus in the Langdon Street area within a month.

One of the assaults involved a stranger beating a 19-year-old student walking home. The victim was left with facial injuries so severe that surgery was needed.

Another, according to police, involved a Lyft driver transporting a non-student to her apartment, asking to use her bathroom and then sexually assaulting her.

An unsigned letter published on The Odyssey described the sexual assault as “completely avoidable” if UW-Madison installed more blue lights.

“If you truly care about the protection and safety of your students, as you claim, then I look forward to seeing more blue lights being installed on every corner of Madison’s streets,” the letter said.

The challenge for UWPD in adding emergency phones closer to where the assault occurred off-campus involves police jurisdiction.

“It would be really difficult to expand the system off-campus,” Lovicott said.

The department met with the student behind the petition, incoming sophomore Sophie Morris, and shared its data. Lovicott said she agreed that more effort should be spent on other safety initiatives.

Attempts to reach Morris were unsuccessful.

Other University of Wisconsin System campuses also report low use of emergency phones, but in at least one case, it saved someone in need.

UW-Milwaukee Police Chief Joseph LeMire said the campus emergency phones yield about 50 calls per year and only a handful of those are people seeking police assistance.

Like UW-Madison, UWM is in the middle of switching its phone system from analog to digital and just beginning to consider how emergency phones fit into the transition. LeMire said the department will involve student government and other groups in the fall on a broad discussion about what the future of UWM’s emergency phones should be.

On UW-La Crosse’s campus, blue lights were updated as recently as 2013. Brighter LED bulbs were added to make them more visible, police detective Chris Schuster said. The university promotes the blue lights to incoming students to use even in non-emergency situations.

In the past year, he said people activated the phones 15 times for a variety of reasons, including one person afraid of walking home alone at night, two people locked out of a building and four with parking questions.

At UW-Superior, no one in the past decade has used an emergency phone to report anything of a serious nature, according to university spokeswoman Jordan Milan. The campus has 13 functional emergency phones.

UW-Oshkosh Police Chief Kurt Leibold said the university plans to slowly phase out some of the blue lights as they stop working. Others, such as those in parking structures, may be kept.

Leibold estimated the annual operating cost of the campus’ 120 phones and 42 blue lights is $1,500. Replacing the analog phones with digital lines would cost an estimated $189,000 and the university is leaning toward not replacing them, but he said it’s still under discussion.

“The parents like the blue lights,” Leibold said. “They’re a comfort to them, but students prefer their phones.”

UW-Oshkosh is promoting a safety app instead that Leibold said students have largely embraced. Nearly half of the students have downloaded the app and like several of its features that emergency phones don’t offer, such as the ability to request a “virtual safe walk” with an officer or friend, a portal to submit anonymous tips to police and an easy way to access shuttle bus routes.

Leibold said just two of the 58 blue-light activations in the past two years were emergencies. One of those was a stranger sexual assault. A witness pressed the blue light while the assault occurred.

“We were able to catch the person,” Leibold said.

None of the UW-Madison students interviewed said they had made a call using an emergency phone on campus. Many weren’t aware of where the phones were located.

One student, incoming fifth-year Kara Erickson, said she hadn’t heard of the phones at all.

Incoming sophomore Jadyn Syverson works as a peer adviser for SOAR, the university’s freshman orientation program. She said she often hears parents ask about safety concerns and points out the emergency phones to them.

“Whenever there’s an extra resource, it gives people peace of mind,” she said.

Many of the phones are located in different floors of parking garages. Others are stationed outside on red, tall towers with “EMERGENCY” written down the side.

Incoming sophomore Jennifer McGinnis said she likes having the phones on campus in case she lost her cell phone, had it stolen or the phone battery had died.

“If it makes someone feel safer in the moment, that’s pretty important,” said incoming senior Alanna Goldman. “I think it’s worth it to keep them around.” 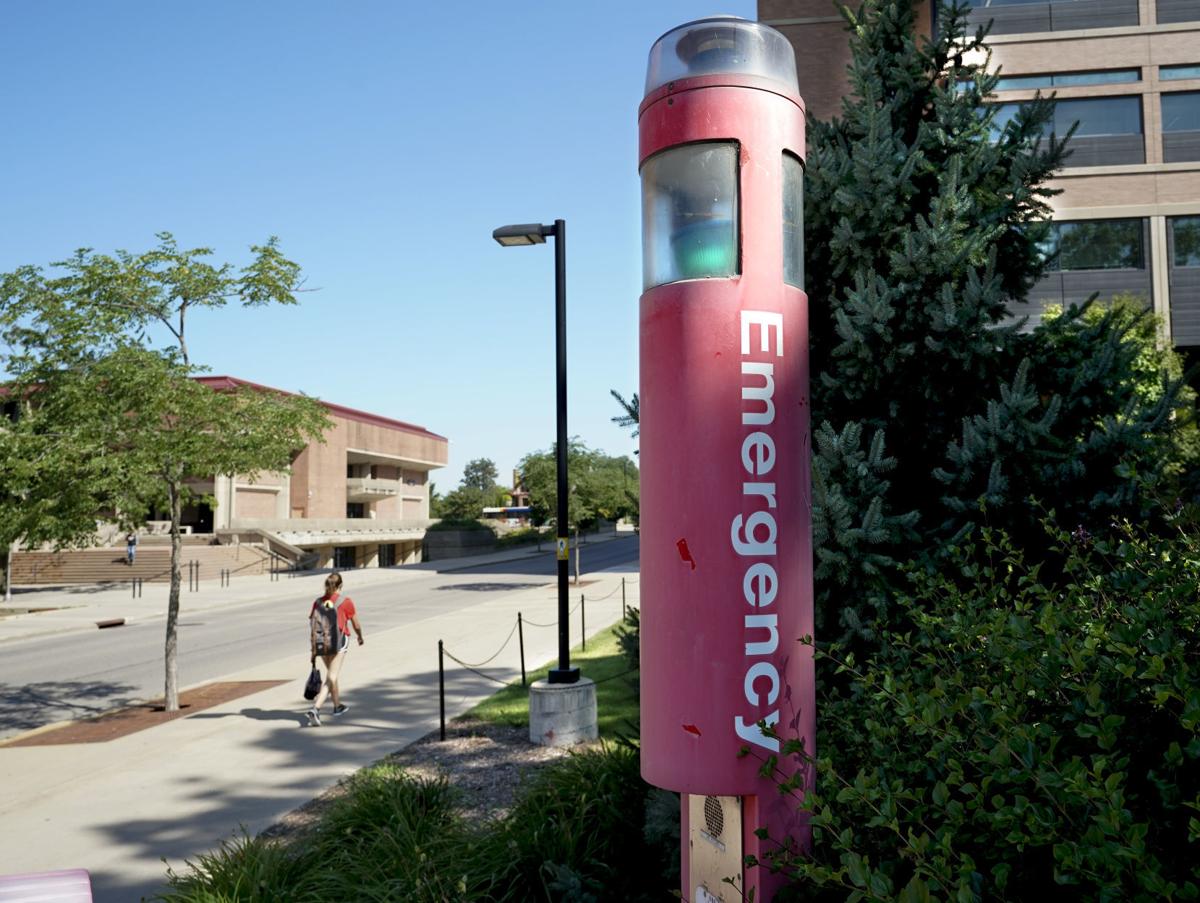 UW Police received about 575 calls from campus emergency phones over 3½ years, the vast majority of which were prank calls or misdials. 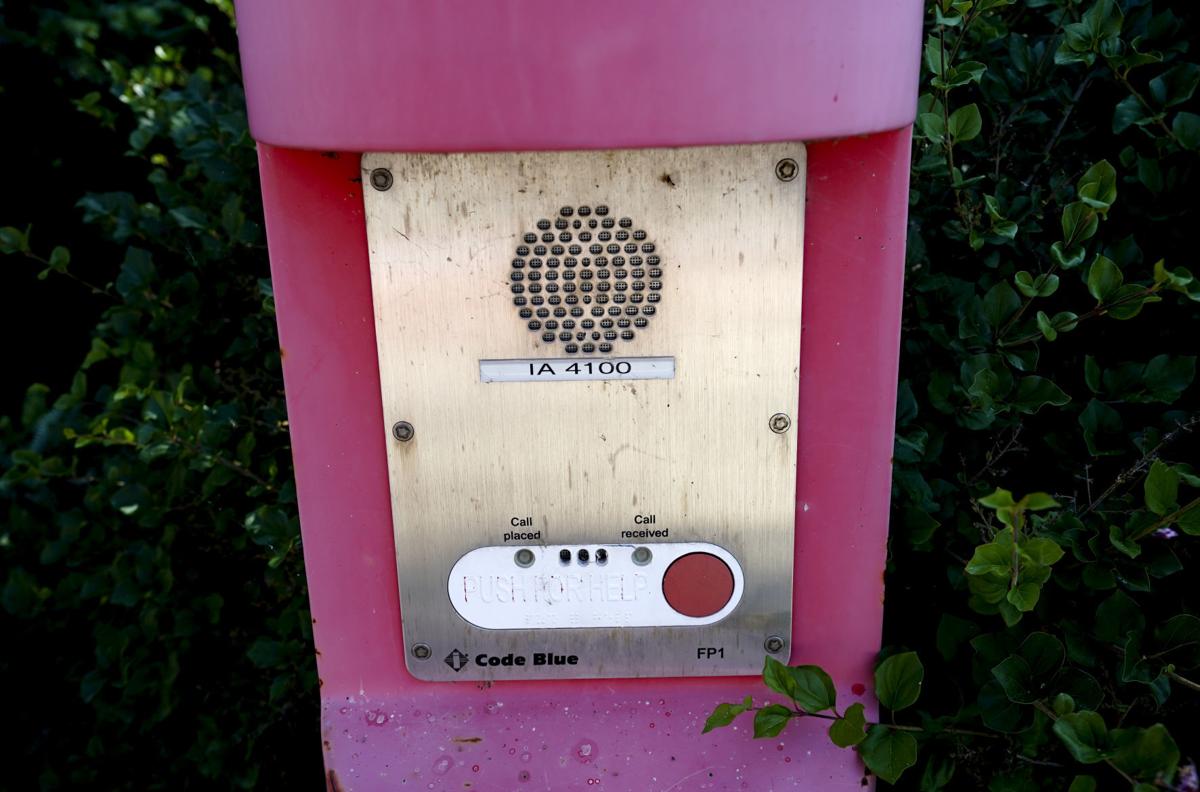 After two assaults near campus last semester, some students called for more emergency campus phones. Anyone pressing the button is connected to UWPD. 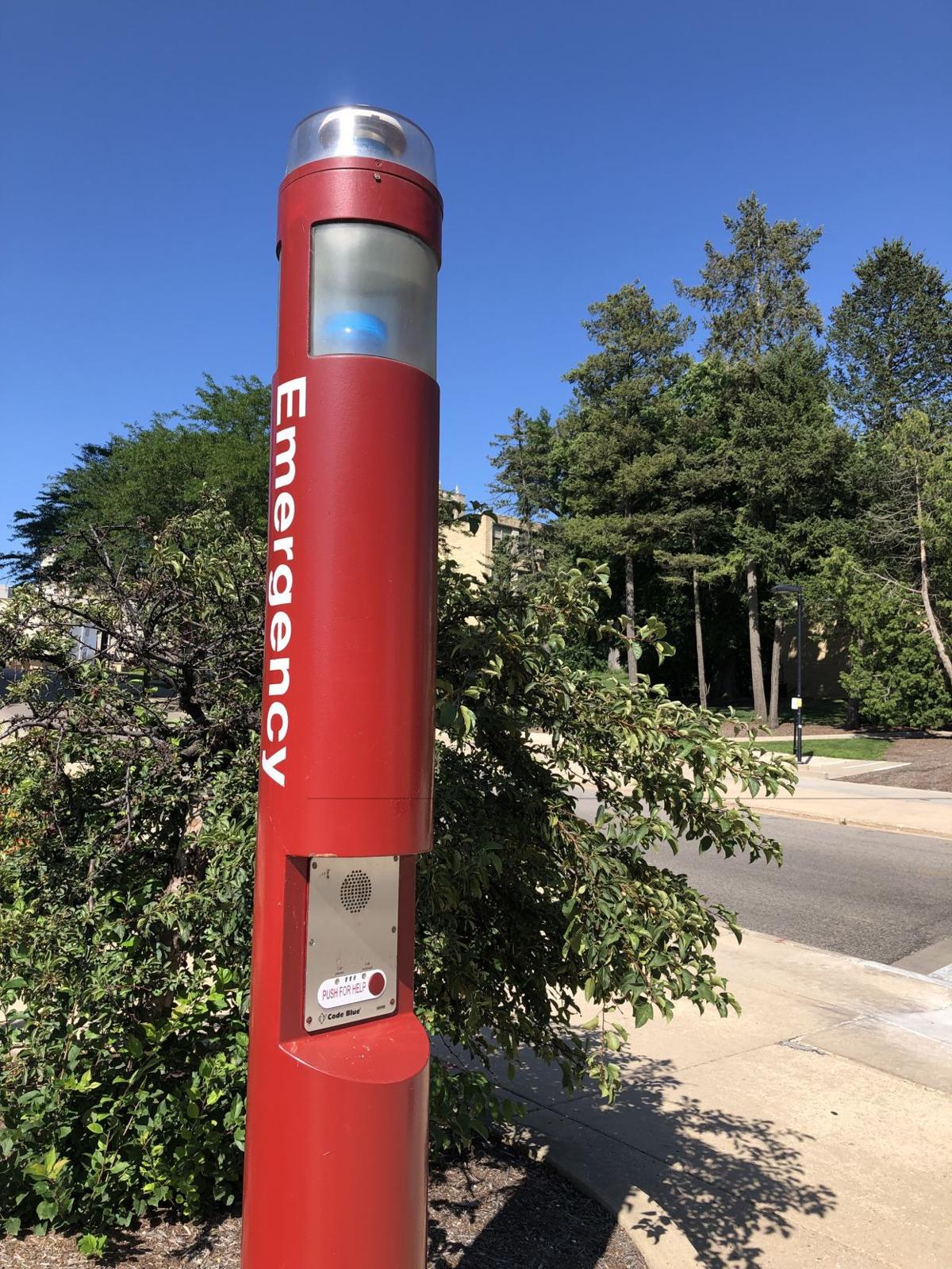 A blue light emergency phone near Vilas Hall is one of nearly 200 scattered across UW-Madison's campus.