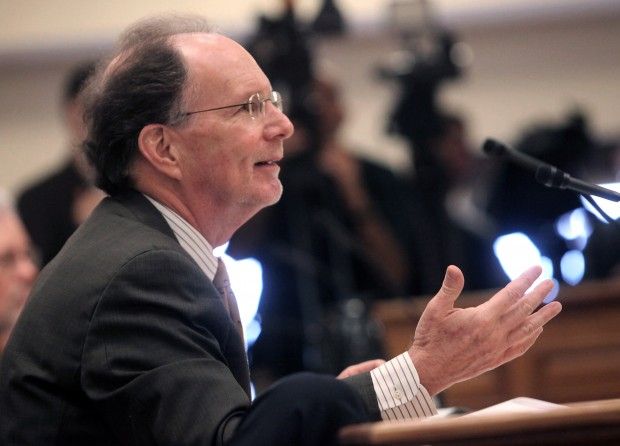 University of Wisconsin System President Kevin Reilly responds to a question during a hearing before the state's Joint Committee on Employment Relations at the State Capitol on Tuesday. The university system has come under fire recently after a disclosure that revealed it finished the year that ended June 30, 2012, with a nearly $650 million surplus spread across multiple accounts at system schools, including $414.1 million in surplus tuition. 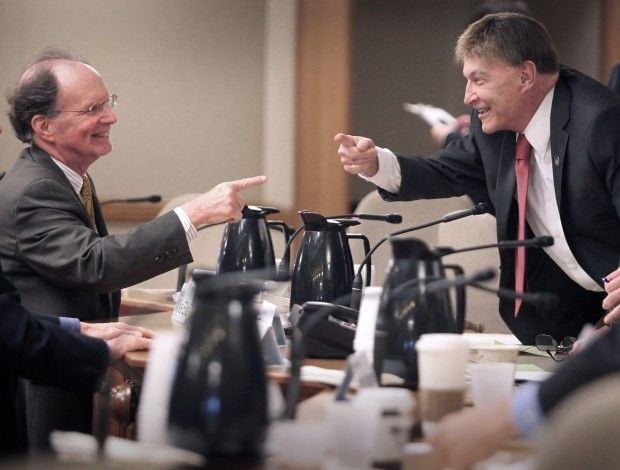 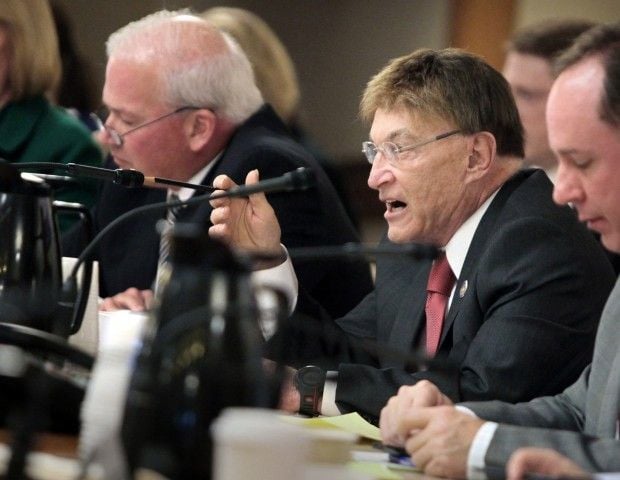 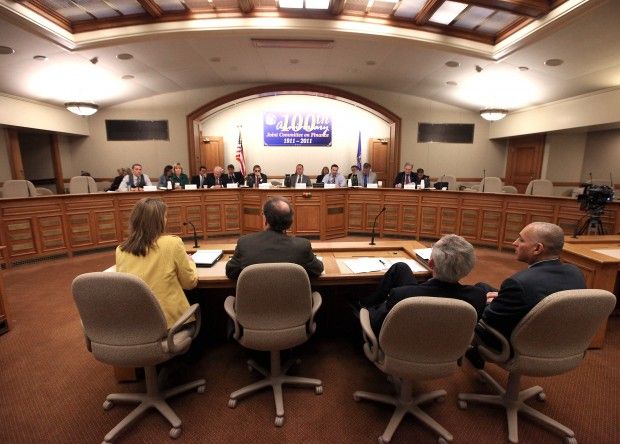 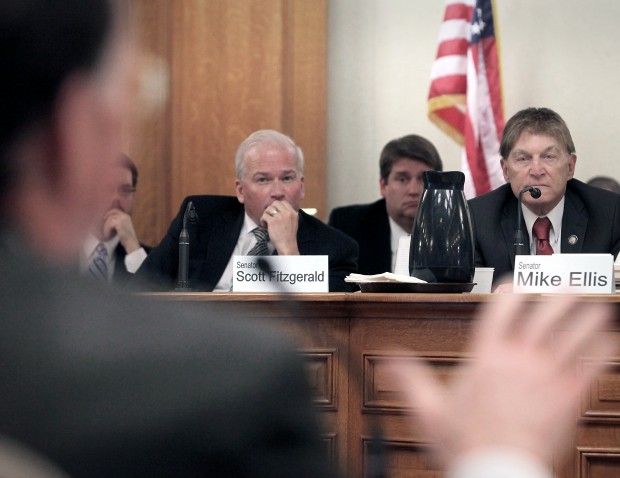 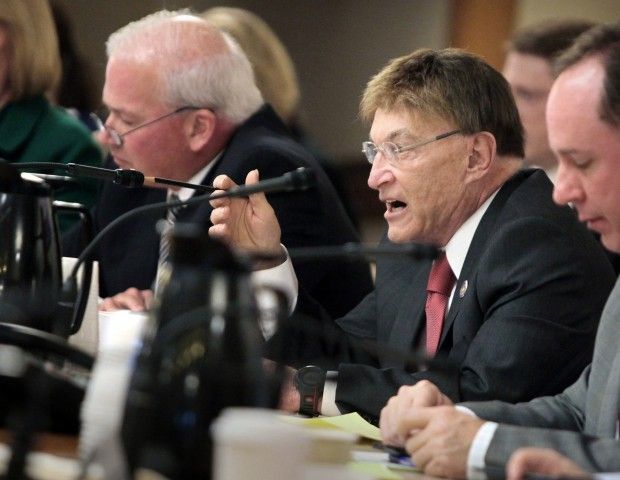 The indignant attack on the University of Wisconsin System from Republicans like state Sen. Mike Ellis (center) shows they are still working their demonize-and-conquer strategy.

It took just minutes into Tuesday morning’s appearance by University of Wisconsin System officials before a legislative committee for the fireworks to begin.

“Continually, time after time after time, you have embarrassed the state of Wisconsin,” said Rep. Robin Vos, R-Burlington. Seated just feet from him were the targets of his fury: Kevin Reilly, University of Wisconsin System President, and David Ward, interim chancellor of UW-Madison.

The opening volley was followed by 90 minutes of questions and accusations from Republicans on the eight-member committee demanding answers from Reilly on the UW System’s cash reserves. A fiscal bureau report last week revealed the reserve funds almost doubled since 2009, mainly from tuition revenues, at the same time the System raised tuition at a 5.5 percent annual rate, the highest allowed by law.

“I can’t tell you how disappointed I am,” said Sen. Alberta Darling, R-River Hills. “Here we have accounts of tuition being squirreled away at the same time you raised tuition. What was your intent?”

Reilly explained that the cash reserve funds — a collection of hundreds of cash balances left over in accounts across the System’s campuses — are a necessary hedge against a volatile funding picture that includes declining state support, a recent economic downturn and an expected enrollment slump in years to come.

“We know we need more and more in the bank,” he told members of the Joint Committee on Employment Relations, which met to discuss changes to personnel policies for the System and its flagship campus, UW-Madison.

That discussion was tabled, with Vos saying questions about reserve funds needed better answers before lawmakers would consider granting the System greater autonomy in budgeting and personnel. Vos and Gov. Scott Walker, along with other Republican lawmakers, have also called for a two-year tuition freeze at System campuses.

Reilly said that, while the System should have been more forthcoming to lawmakers about the existence and intended use of the cash reserves, it keeps a reserve that is in the low to middle range of peer institutions. Neighboring Illinois’ university system keeps a 34 percent “primary reserve ratio,” while Minnesota’s is nearly 29 percent. Both exceed Wisconsin’s 25 percent rate, according to System figures.

The state’s fiscal bureau found that the surplus grew to $648 million in 2012, including $207 million without a specific funding destination.

“They thought they were played,” Rep. John Nygren, R-Marinette, said of students he’s talked to in his district. “As a legislator, I feel like I’ve been played.”

Sen. Michael Ellis, R-Neenah, focused his fury on the Board of Regents, demanding a list of regents who voted for the budgets that included the reserve funds.

“Who’s running the university?” he asked. “They don’t seem to be doing much.”

Longtime Regent David Walsh, a Madison lawyer, said he doesn’t see the Board of Regents as a rubber stamp and that members of the business, finance and audit committee carefully scrutinize big-picture revenue and expense items without combing the budget line by line. He said it’s assumed the System will carry a reserve balance, calling it “thoughtful planning.”

“The concept of reserves makes clear business sense,” he said. “The amount of the reserves is an issue we welcome dialogue on.”

Reilly promised changes that will ensure the System details where the reserves will be spent and that will set guidelines for how much it can keep in reserve. He said the funds would keep the System going for three months but acknowledged the System needs to do more to explain the fund’s size and purpose.

“I hear the anger,” he said. “I think in many ways it’s justified.”

Bob Lang, director of the Legislative Fiscal Bureau, said it’s possible other agencies have reserve or surplus funds, but he’s not certain which ones do.

Most agency funding must be used or forfeited in a single year or biennium, he said. However, there are “continuing appropriations” that some agencies receive that allow them to roll over unused balances year to year, Lang said.

After the hearing, Reilly said he wasn’t concerned for his job after some GOP lawmakers called for him to be fired.

“I’ll let other people worry about my job,” Reilly said.

Assembly Speaker Vos said after the hearing that it wasn’t his role to call for Reilly’s ouster. He said Reilly has “serious credibility problems” with lawmakers and it could jeopardize cherished legislative priorities for the System including greater autonomy on its budget and personnel policies.

Walker pledged a $181 million funding increase for the System in his next biennial budget, which was met with applause by Reilly and System leaders.

Reilly last Friday issued a press release calling for a 2 percent tuition increase for each of the next two years. The release, which came out minutes before the cash reserves report, included a call for a $30 million financial aid increase.

Vos criticized the timing, accusing Reilly of “launching a pre-emptive press release” to distract from the news of the cash reserves.

The pressure on the University of Wisconsin System to freeze tuition increased Wednesday.

"Right now, UW-Madison needs your voice more than ever," the email from the alumni association said. "You have the credibility to influence your friends, family, neighbors, and — most importantly — elected officials. You are the best advocate the university could ask for."

Cash reserves held by the University of Wisconsin System prompt an outcry over tuition and spending.

University of Wisconsin System President Kevin Reilly responds to a question during a hearing before the state's Joint Committee on Employment Relations at the State Capitol on Tuesday. The university system has come under fire recently after a disclosure that revealed it finished the year that ended June 30, 2012, with a nearly $650 million surplus spread across multiple accounts at system schools, including $414.1 million in surplus tuition.

The indignant attack on the University of Wisconsin System from Republicans like state Sen. Mike Ellis (center) shows they are still working their demonize-and-conquer strategy.