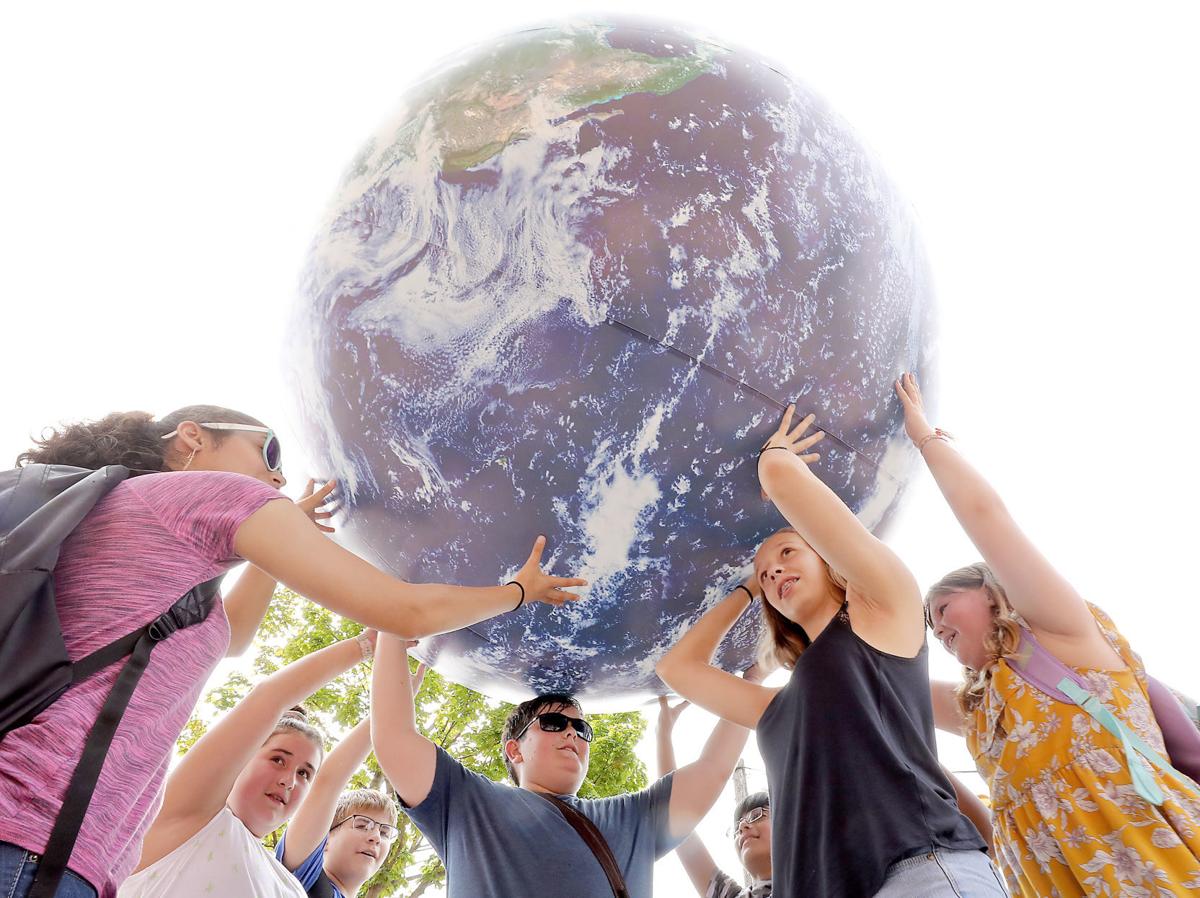 As part of a "global climate strike," area students carry an inflatable replica of the Earth at a rally outside Madison Gas and Electric's Blount Generating Station to demand a more urgent response to climate change. 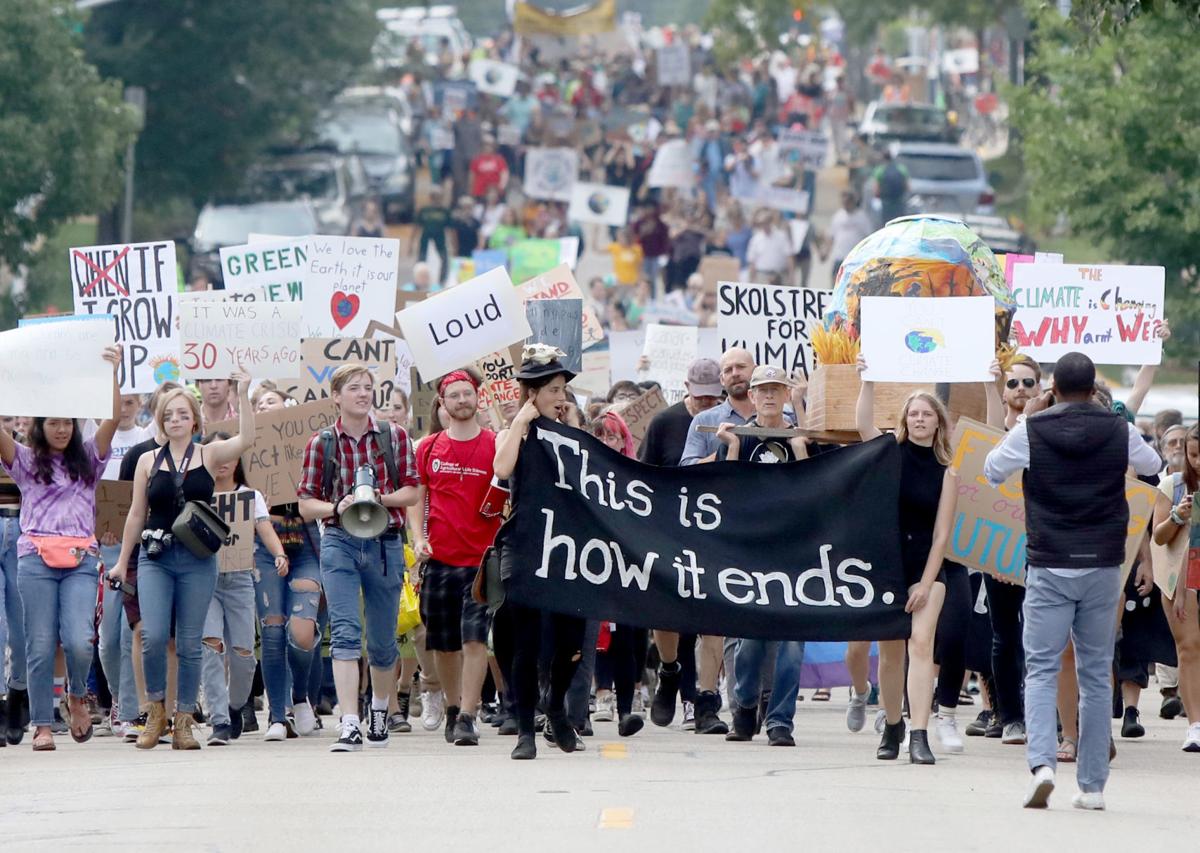 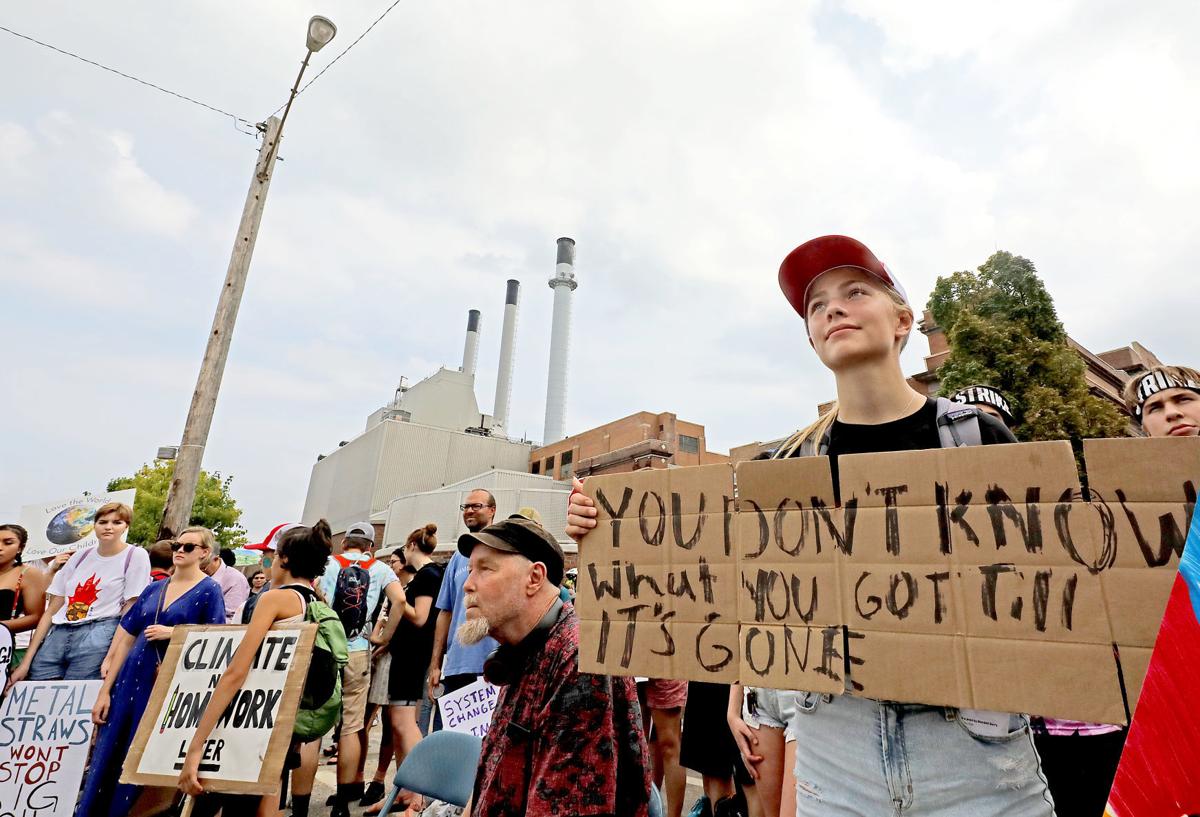 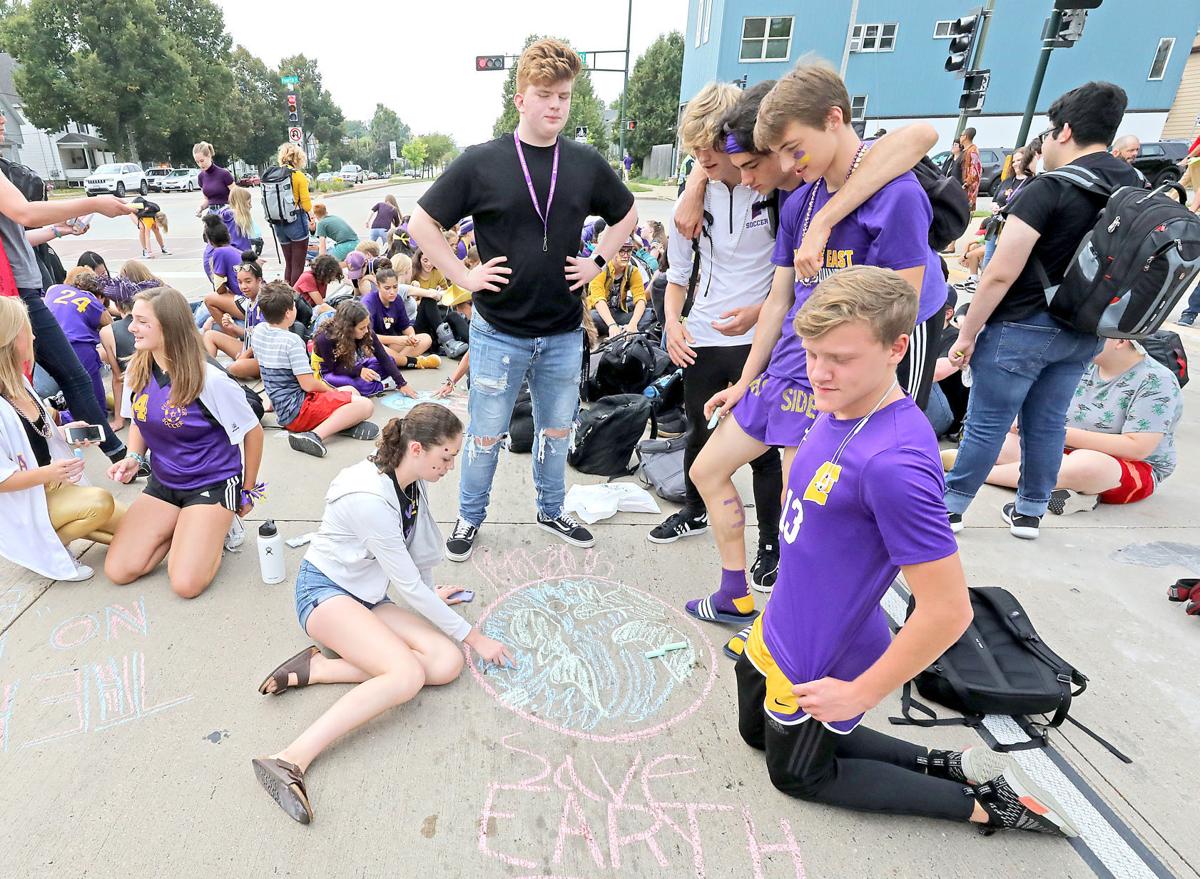 A youth-led protest in Madison took a two-front approach Friday with demands for Gov. Tony Evers and Madison Gas and Electric to take immediate action to prevent a “climate crisis.”

The protest was part of a “global climate strike” Friday pushing for immediate action to combat rising temperatures and the expected problems associated with an altered climate. Hundreds of thousands of people are estimated to have participated throughout the world.

Outside the state Capitol and on the streets bordering the utility’s Near East Side facilities, hundreds rallied in support of speeding up the transition away from carbon-based energy to renewable sources and for declaring climate change an emergency.

“If we actually want to see real change on the Earth and in our environment, we need to start setting higher standards for ourselves,” said Sophie Guthier, one of the directors of the Youth Climate Action Team, which helped organize the hours-long protest. “We’re here not for fun, but for our survival.”

The protesters called on Evers, a Democrat, to declare a “climate emergency.” The demand for MGE is to reach 100% renewable energy by 2030 instead of the utility’s goal of hitting net-zero carbon electricity by 2050 that was set in May.

MGE spokesman Steve Schultz said the company was one of the first utilities to set “such an aggressive goal.”

He said it is in line with a report last year by the Intergovernmental Panel on Climate Change, which said greenhouse gas emissions need to drop 45% in the next decade and fall to near zero by 2050 to minimize the risk of catastrophic climate change.

In a video statement Friday, the utility’s CEO and president, Jeff Keebler, said the 2050 goal signals a direction “but it doesn’t determine our pace. I believe we can go further, faster by working together with customers.”

Evers signed an executive order last month calling for carbon-free energy within the state by 2050.

A spokeswoman for the governor did not say whether Evers intends to declare a climate emergency, but instead referred to comments Evers made on Twitter in support of the protesters and acting “to prevent continuing damage to our climate and to invest in solutions that help to mitigate the changes that have already occurred.”

The protest started around noon at the Capitol, where faith leaders and retirees gathered to rally behind the youth.

Democratic Secretary of State Doug La Follette told the crowd he supports Evers declaring climate change an emergency — an action that has been taken or is being pushed in other parts of the country and world.

“It is embarrassing to me as an elected person and as a scientist that my government in Washington turns a blind eye, or even worse, turns an aggressively negative eye toward the issues of the environment,” La Follette said.

The demonstrators left Capitol Square on a march — led by a papier-mâché replica of a burning Earth inside a coffin — to the corner of East Main and South Blount streets for speeches, demonstrations and informational booths at the heart of MGE’s facilities on the Isthmus. The protest eventually moved back to the Capitol.

Guthier, who helped organize Friday’s demonstration, also took the lead in figuring out logistics for a March student-led climate strike in Madison when she was a senior at Memorial High School.

Following that strike, the Youth Climate Action Team was formed as a nonprofit to better coordinate fundraising and advocacy, said Guthier, who is now focusing on environmental studies and political science as a freshman at UW-Madison.

“Today’s my birthday. I wish I wasn’t here. I wish I was with my friends,” said the 19-year-old Guthier. “But I’m here so I can survive.”

The Rev. Kristin Gorton said she viewed the protest as “a moment of transition, a moment of movement and a specific turning point in the youth gaining their voice and being recognized as the leaders they are now and not some time in the future.”

Gorton was joined by congregants of Memorial United Church of Christ in Fitchburg, where she is the pastor.

She said the congregation is actively involved in “creation justice” by installing solar panels on the church, changing to more energy-efficient light bulbs and running a community orchard, among other actions to improve its environmental advocacy.

Alyssa Knutson left Monona Grove High School to participate in the demonstrations, bringing a sign that read: “The dinos thought they had time too.”

The 18-year-old high school senior said some of the Democratic candidates for president aren’t treating the issue with urgency, adding that some won’t be alive to experience the major effects of climate change if rising temperatures aren’t controlled.

“We can make a change now if we start it, and that’s really important for people’s children and grandchildren,” she said.

Vicky Jones was joined by fellow members of the First Unitarian Society, where the Near West Side congregation advocates for social, climate and economic justice, she said.

Jones said people can make their own individual impact — adding that she is trying to be more conscious of how she uses transportation, her personal electricity use and where the food she eats comes from — but “big steps” are necessary.

The area could see 2 to 3 inches of rain from “training” storms with high rain rates, according to forecasters.

A research report released Wednesday also found a significant increase in the number of Madison middle school students with unexcused absences over a six-year period.

The bill would expand existing protections already granted in state law to electric utility companies to also include gas or oil companies and their pipelines, water utilities and other energy generation, storage and transportation systems.

The local turnout for Madison’s global climate strike last month indicates that many people, young and old, are ready to fight for the future …

The bill would expand existing protections already granted in state law to electric utility companies to also include gas or oil companies and their pipelines, water utilities and other energy generation, storage and transportation systems.

As part of a "global climate strike," area students carry an inflatable replica of the Earth at a rally outside Madison Gas and Electric's Blount Generating Station to demand a more urgent response to climate change.