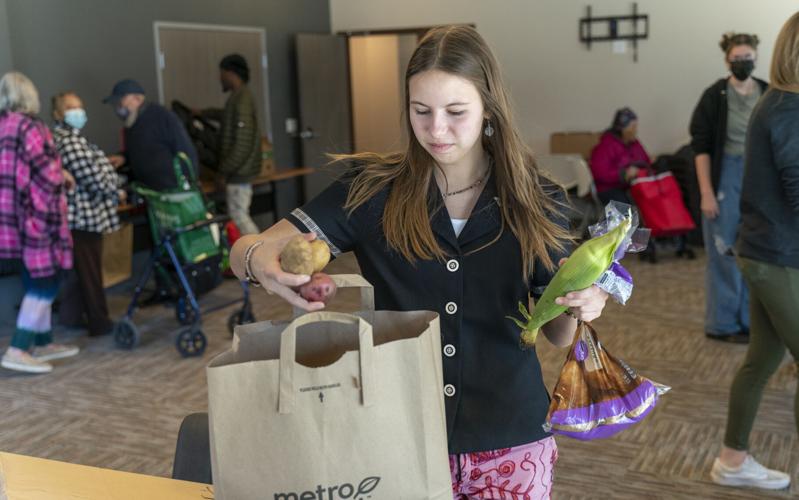 Lilliana Greisch, who just finished her junior year at Monona Grove High School, loads up items at a pop-up food pantry she helps organize at the Generations apartments at Union Corners on Madison's East Side. 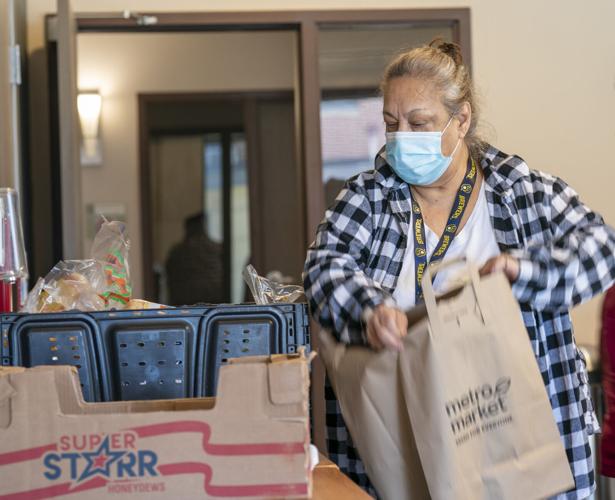 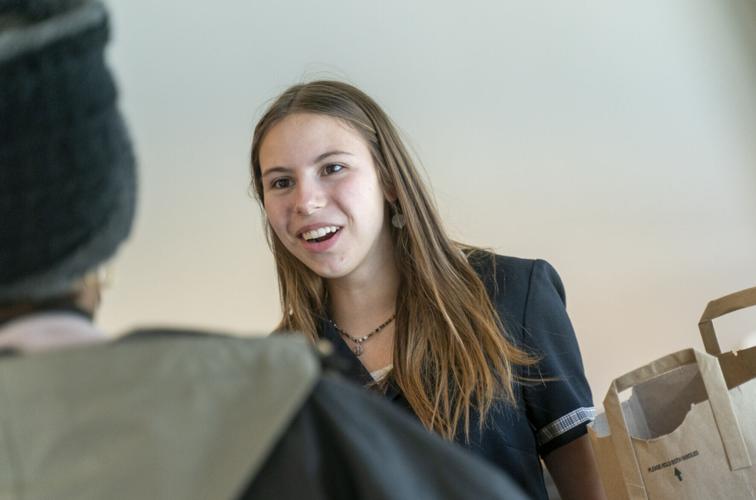 Lilliana Greisch, a student at Monona Grove High School, talks with a client at the pop-up food pantry she helps organize at the Generations apartments at Union Corners. “I like to go there and I like to talk to people," she says. 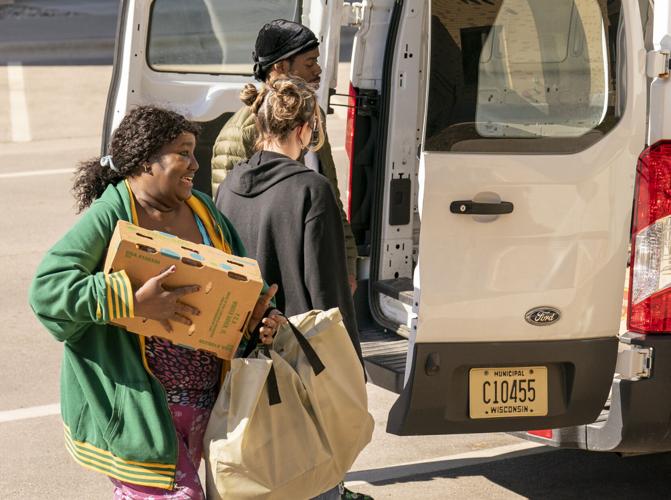 When then Monona Grove High School junior Lilliana Greisch decided to continue the tradition of a weekly pop-up food pantry, she did not know the obstacles she would face.

Greisch did much of the leg work to continue a pantry that had been started by another high schooler at the Generations apartment complex at Union Corners. It was more work than she expected, Greisch said. But at the same time, she grew to love those using the pantry.

“I like to go there and I like to talk to people. They are a lot of older people, so I like talking to them,” she said.

It was the summer before her junior year at Monona Grove High School when Greisch and Tayah Dean, a junior at La Follette High School, met Clio Maya-Johnson, who had started the pop-up food pantry but was heading to college.

All three were members of a group called Youth Climate Action Team, and Maya-Johnson had just graduated from East.

However, as Maya-Johnson was winding down her operation of the pantry, the way the food was supplied was in transition. Greisch did most of the work to set up the donations, which come from a variety of sources, before she and Dean operated their first pantry last September.

“I didn’t expect it for it to be as difficult as it was just to plan it,” she said.

As Greisch worked at procuring the food, some would ask why the apartment residents don’t just use existing food pantries.

“Where this location is, it’s affordable housing, so they have a harder time getting to places,” she said.

When they saw a need, Greisch and Dean organized drives for such things as toiletries, coats and plastic bags at their schools. Dean did that by starting a volunteer club at La Follette.

Once the pantry was up and running, Yolanda Thetford, who lives in the apartment complex, was there to help operate it as she had done in the past. She also texted residents ahead of time to remind them about the pantry, which is open from 4 to 4:30 p.m. every Thursday at 2531 Winnebago St.

Typically about 25 people have come to the pantry in one day, but numbers could reach up to about 50, Thetford said.

“We don’t turn nobody away,” she said.

Bill Kilgour was picking up some Roma tomatoes at the pantry last month at the urging of a close friend he was helping get settled in his apartment. The friend figured since there was plenty of food, Kilgour should make use of it. Kilgour, who taught sociology at Madison Area Technical College, also is aware of how the pantry fills a need for those who need it.

Robert Fischer, who also came to the pantry last month, said he has been to other food pantries at a time in his life when he was more dependent on them and still sees their value, even for those receiving food stamps.

“Food pantries are necessary for people who can get food if you don’t have any food stamps,” he said. “There’s people who need toiletries just as much as food and clothing.”

A struggle experienced in recent weeks with getting food to continue the pantry illustrates how there may be sources, but getting food to people can be difficult because of various reasons, Maya-Johnson said.

Thetford said the difficulties with procuring food has caused her to step away from the operation while there is still “very much a need.”

“For three weeks, people have been going home with very sad faces,” Thetford said about the lack of food.

Maya-Johnson said she started the pantry after becoming interested in food justice issues, and it wound up defining her career goal. First she set it up in her yard and then moved it the Generations apartments, which are next door to her family’s home.

An East classmate, Malik Terrab, used Maya-Johnson’s efforts as a blueprint to start up a pop-up pantry at Honeysuckle Park on the Far East Side. Maya-Johnson named them the “Free for All” pantries.

Maya-Johnson started the pantry earlier in the COVID-19 pandemic when there was more social distancing than there is now. But she has been impressed with what Greisch accomplished with Dean.

“She has continued with it and made it grow,” Maya-Johnson said of Greisch. “It can be indoors now, and for someone who doesn’t even live in the neighborhood, who could come and continue it on, I am so grateful.”

“I get to see people be so happy. People are just generally so kind and caring for each other,” Dean said. “It is such a genuine and strong community. I love seeing it and belonging to it. With the pantry, I feel they get that strong family connection.”

Each Monday, the Wisconsin State Journal features a story about learning in Wisconsin. Here are School Spotlight stories from the past year.

Lilliana Greisch, who just finished her junior year at Monona Grove High School, loads up items at a pop-up food pantry she helps organize at the Generations apartments at Union Corners on Madison's East Side.

Lilliana Greisch, a student at Monona Grove High School, talks with a client at the pop-up food pantry she helps organize at the Generations apartments at Union Corners. “I like to go there and I like to talk to people," she says.