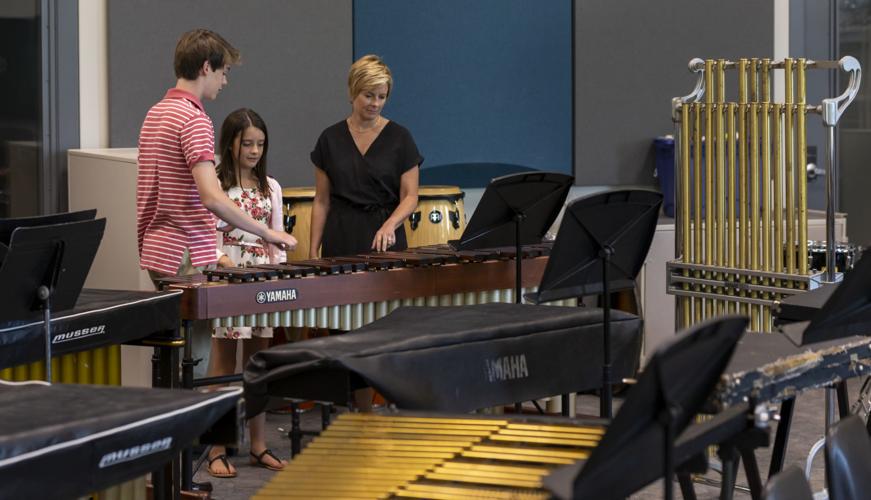 Edgewood High School ninth-grader Benjamin Roe, left, his sister Sara Roe, a seventh-grader, and mother Caroline Roe check out the vibraphone in a newly completed band room at the McKinley Performing Arts Center at Edgewood High School. The center, which will be shared with Edgewood College and Edgewood Campus School, has a 465-seat theater, classrooms and rehearsal rooms. 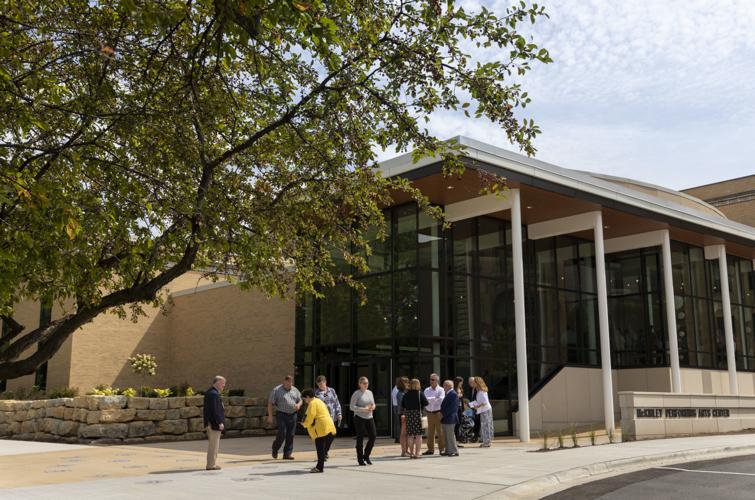 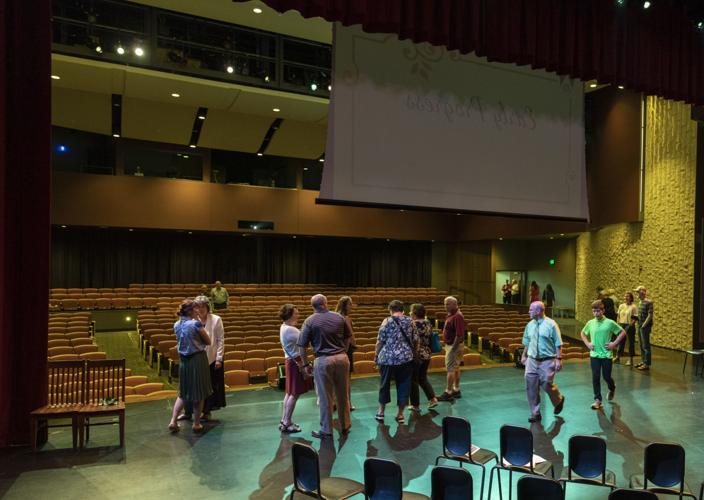 People tour the newly completed McKinley Performing Arts Center at Edgewood High School during Sunday's grand opening. The new stage is about five times as deep and two times as wide as the one it replaces.

All it takes is stepping into the atrium entrance of the new performing arts center at Edgewood High School to know what the space means to the students, staff and future arts patrons.

The new light-filled atrium-style foyer with room to congregate replaces the cramped hallway that had led to the school’s auditorium. It is indicative of what lies beyond in the new McKinley Performing Arts Center that has transformed the music and drama departments with more space, functionality and light.

“I love it. There’s lots of natural light,” senior Nate Frucht said at Sunday’s grand opening. “It (the old space) was a lot less open and flowing.”

He also likes that chairs will be moved into the atrium to turn it into a casual study area when there are no performances in the auditorium.

The new space replaces and expands the high school’s old auditorium. It was built in the space the former auditorium occupied and extended into what was a grassy area. The auditorium also will be used by the neighboring Edgewood College and Edgewood Campus School.

The McKinley Performing Arts Center features state-of-the-art performance spaces and includes a 465-seat theater, classrooms and rehearsal spaces. It also includes the Kathleen O’Connell Auditorium — which was the name of the old theater, honoring the principal who started in 1955 and served for 29 years — as well as the Rockne F. Flowers Atrium and the Walker Music Center.

The old theater was not accessible to people with disabilities, and the new stage is about five times as deep and two times as wide, said Mike Elliott, president of the high school. The dressing rooms were a level below, and to go from one side of the back stage to the other required going through the dressing rooms, he said.

Now the dressing rooms, makeup room and green room are all on the same level, and a shop to build and store sets is at the back of the stage.

The band rooms, the choral room and the piano classroom are on the same level so it’s now possible to just wheel the equipment into the auditorium for performances, Elliott said.

“It’s nice to have windows in the band room and not be in the basement anymore,” said Gabby Guinther, a senior who plays the flute.

Carrie Backman, who teaches instrumental music at the high school and is band director at the college, said the space is now as good as what is happening in the facility. She said because the classrooms were in the basement and there was no elevator, instruments had to be carried up and down the stairs. The old classroom space was located near the pool, didn’t have windows to let in natural light and was not air-conditioned — all factors that made it less healthy for humans and instruments.

In addition, pipes overhead would sometimes leak into music department classrooms, rain would come through the auditorium roof at times and the dressing rooms would flood.

“There was leaking from every direction,” Backman said.

The performing arts center is named after Dennis McKinley, a 1963 Edgewood High School graduate who has served as a band director and in many other positions at the high school — including associate principal, alumni director and interim president — since he started teaching there in 1967. He still works there part-time.

The $9.6 million rebuild and expansion was made possible in part by a substantial gift from Diane Ballweg, who is the namesake for the Diane Ballweg Theatre at Edgewood College and is the founder and instructor of the high school aviation program. Ballweg, who was a freshman the first year McKinley taught at Edgewood High, wanted to name the performing arts center after him.

“It took me a long time to absorb that,” said McKinley, who was enjoying reunions with former students at the grand opening. “It didn’t become real till last Thursday when we had our first all-school Mass in here.”

Cecil Powless, a senior who played Jesus in “Godspell” last year in performances at First United Methodist Church while the theater was being built, said the new space is an “absolute treat” and aptly named after someone who “put his life into this school.”

“It really is what Dennis McKinley is all about — encouraging the arts,” senior Michael Orosz-Fagen said.

Classes at Monona Grove High School were canceled Friday after the school’s art teacher and tennis coach died during a tennis match Thursday.

The change was to take effect just as schools were implementing tighter controls on student cellphone use.

Kid's Raptor Fest teaches students of all ages to care for land, water and wildlife

The event was designed to encourage attendees to take care of Lake Kegonsa and the Yahara River to protect the habitat and ecosystem that draws the birds.

Pizza for 9 days straight? It may be a kid's dream, but parents fed up with Madison School District food program

One day last week, Irving said, the “fresh fruit or veggie” side option for her students was Craisins, aka, dried cranberries.

Turning ‘no’s’ into ‘yeses’: Leaders of Madtown Mommas advocate for students with disabilities

“Just having that one body in the room that you know is there for you makes a big difference," says Mattie Reese, who co-founded Madtown Mommas with Martha Siravo and other moms.

In July, the board approved a 3% base wage increase for teachers, who also get automatic raises for seniority and degree-attainment.

Inspire Early Childhood Learning Center really is like a zoo

During Eddie’s Hour -- named after the school mascot -- students can choose an activity ranging from a nature walk to a board game.

Current and past school board members have been drawing attention in recent months to the distractions cellphones create in the classroom.

The smell of lacquer on the new gymnasium floor and fresh paint on the walls in the performing arts center mingled in the air along with hundreds of community members who came out for the West High School ribbon cutting and open house Sunday.

Edgewood High School ninth-grader Benjamin Roe, left, his sister Sara Roe, a seventh-grader, and mother Caroline Roe check out the vibraphone in a newly completed band room at the McKinley Performing Arts Center at Edgewood High School. The center, which will be shared with Edgewood College and Edgewood Campus School, has a 465-seat theater, classrooms and rehearsal rooms.

People tour the newly completed McKinley Performing Arts Center at Edgewood High School during Sunday's grand opening. The new stage is about five times as deep and two times as wide as the one it replaces.