Beyoncé leads Grammy nominations with 9. See who else is nominated. 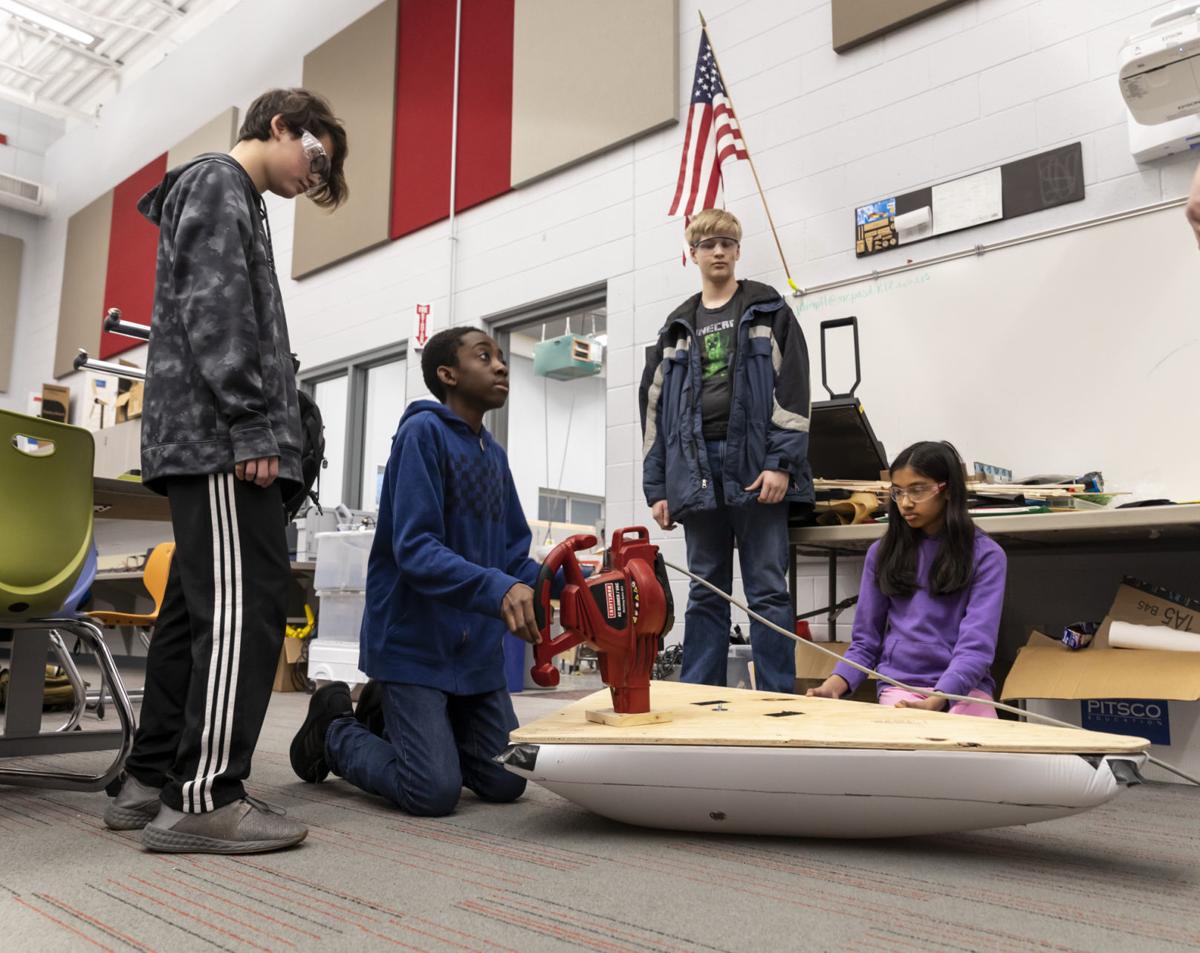 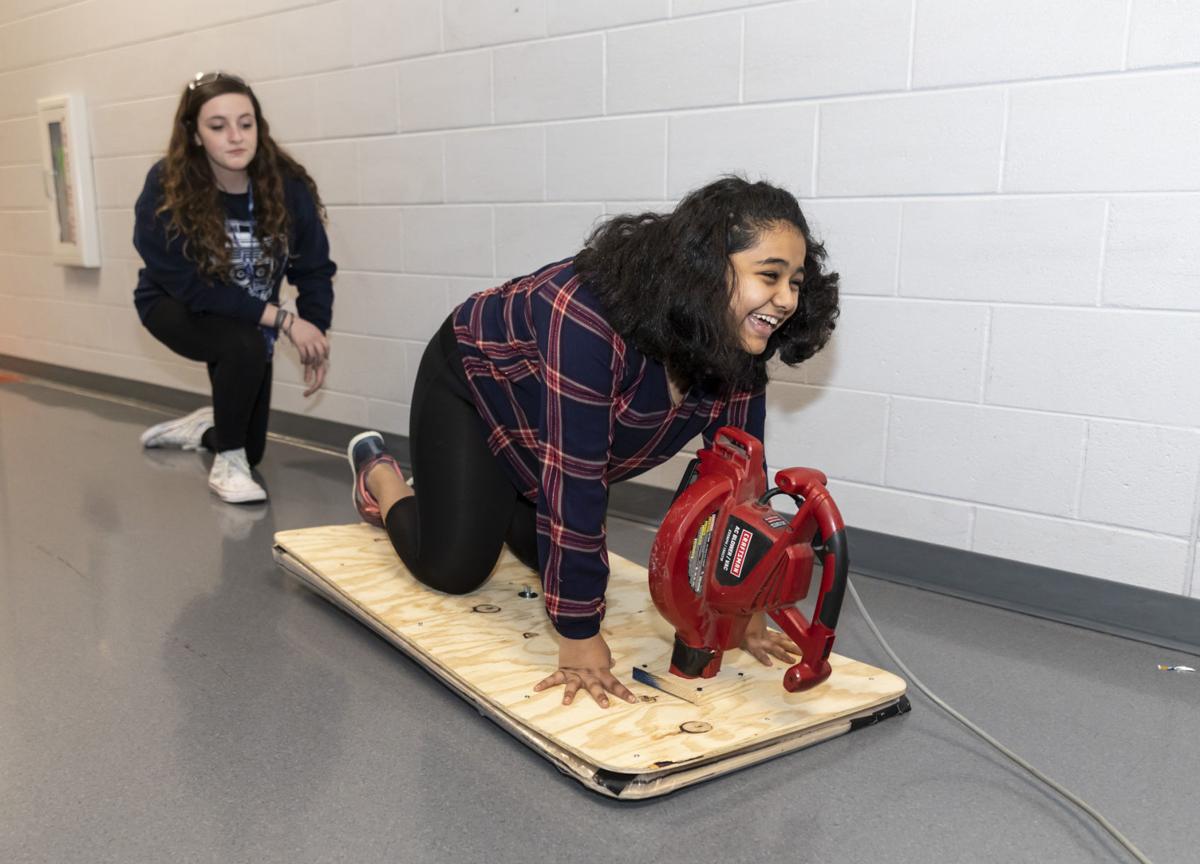 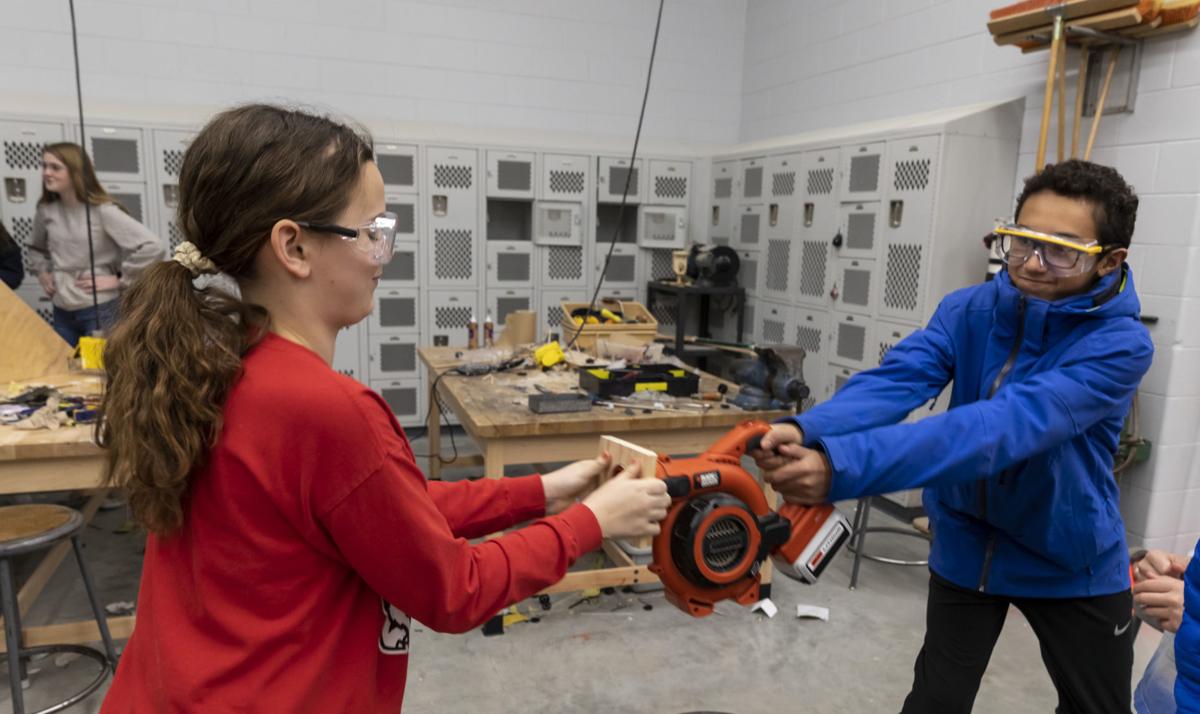 When some Middleton High School students decided to start a new club at Kromrey Middle School to promote science, technology, engineering and math, they knew they were on the right path because of the overwhelming response.

More than 95 students signed up in the fall for the STEM Club, prompting the organizers to limit enrollment to the seventh- and eighth-graders who turned their forms in first.

That eliminated fifth- and sixth-graders but brought the numbers down to a manageable 28 with a waiting list.

While there is a rocket team at Kromrey that Jeremy Dimpfl, who teaches engineering and technology at the middle school, advises, only 10 students can be on it. And some students said they wanted a club with a different focus.

This fall, the STEM Club was divided into groups to work on a project to design a hovercraft powered by a leaf blower that would lift a rider and propel the student forward. Dimpfl, who also advises the STEM Club, said the project was aimed at getting the students to be creative and work collaboratively.

Seventh-grader Mohit Tankala said the project has been fun to make.

“I wanted to see what I could achieve with my creativity,” he said about joining the club.

When Mohit got to test the hovercraft by riding on it, he said, “It felt really nice.”

At one point the skirt of the hovercraft, which students made with a shower curtain or plastic tarp, got ripped.

The club was the brainchild of sophomore Emily Fisher, who is a member of the outreach branch of the Middleton Engineering Club. While outreach already involved tutoring in the summer, Fisher’s idea for the club was to help students feel like they could take classes in high school that seem intimidating and also fall in love with engineering like she has.

“I want these kids to feel the same way,” said Fisher, who attended Kromrey.

She talked about the idea with her friend Lauren Halterman, also a sophomore, who got on board, as did another friend, Lynnea Colbert, also a sophomore, and they helped flesh it out. Three other students then got involved in the behind-the-scenes organizing part of the club but do not go to the middle school.

“They were very involved in the engineering club at the high school and they thought it would be a great way to bring kids together and introduce them to some of the opportunities they have at the high school,” Dimpfl said. “It’s a good connection for them to come down and, like I said, really kind of get the kids fired up about engineering and STEM.”

The STEM Club is ending as rocket clubs at the middle and high school levels soon start up, but Fisher said the high school students plan to run the STEM Club again next year and will make changes based on what they learned this year. She hopes it will continue after she graduates.

“I love engineering. I love math. I love technology, and I would do the stuff from home anyway so why not do it with my classmates?” said eighth-grader Mason Thomas, who also has been getting some advice on home projects.

Eighth-grader Zach Patton said he joined the club because he knew his friends would be in it and he likes engineering. He also likes being able to use the machinery in the shop.

“We get to use different tools and everything else,” he said.

Seventh-grader Teju Manivannan said learning how to use the machines and creating the hovercraft has been difficult.

“But then my teammates help out,” she said.

The briefs were filed as part of the case against Public Health Madison and Dane County's emergency order to close schools for in-person learning for grades 3-12, which the state Supreme Court put on hold in September.

The Baraboo School District will be switching to virtual learning for six weeks following Thanksgiving, as recommended by the Sauk County Health Department.

Teacher unions seeking to retain their status are doing slightly better with participation than last year, with 66% of members having cast votes, up from 63% last year.

A Burlington Area School Board meeting ended Monday night with chanting, arguments, School Board members walking away and a police presence, sparked by a proposal that BASD adopt an anti-racism policy and curriculum.

Despite COVID-19 pandemic, 'Learning Out' is integral to Montessori school's philosophy

Madison Community Montessori School has come up with a hybrid model to keep students safe while giving them a chance to interact and spend time in nature, which is integral to the Montessori philosophy.

Over the coming four weeks, students will break into smaller groups to discuss three topics: climate change and the circular economy; how do we keep Europe and the U.S. connection after the pandemic?; and the future of learning after the pandemic.

Last spring, the Madison Metropolitan School District distributed about 16,000 meals per week. This fall, with more distribution sites and a partnership with Badger Bus, that's up to 50,000 per week.