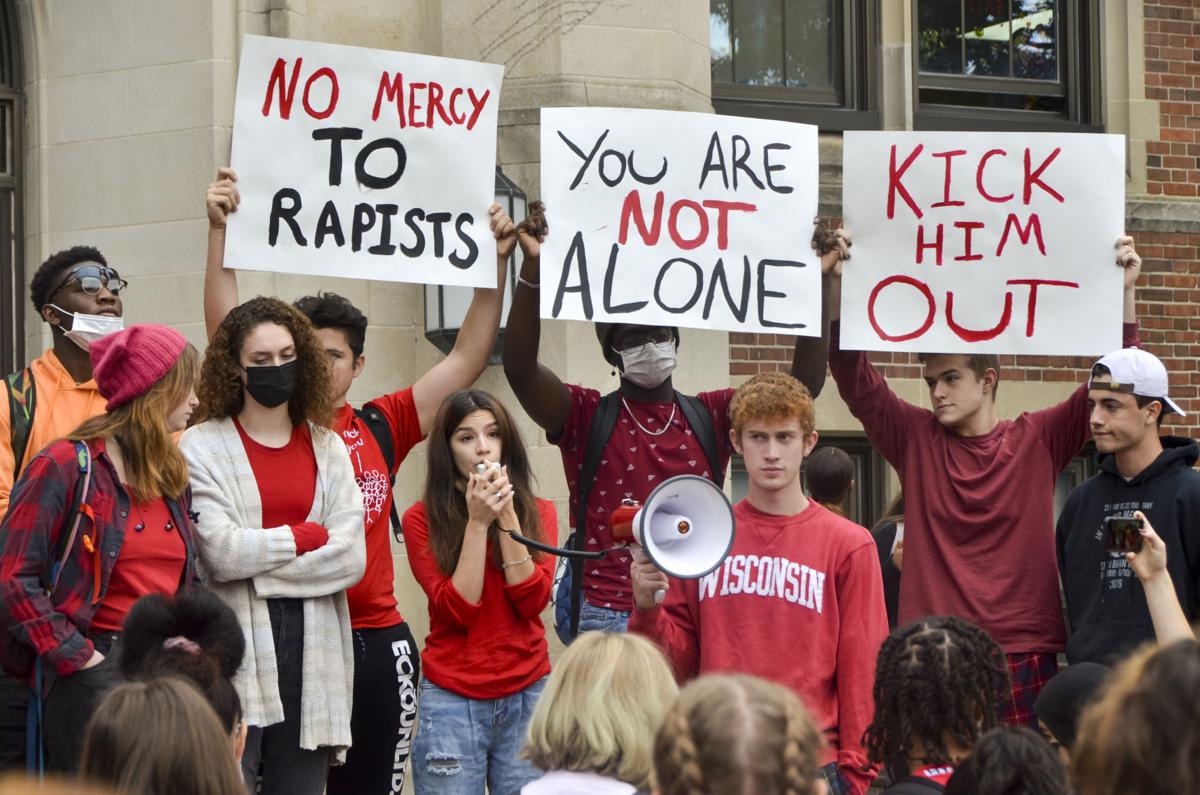 East High School senior Feliz Casteneda, center, speaks to a crowd of students outside the school on Wednesday, in support of survivors of sexual violence. 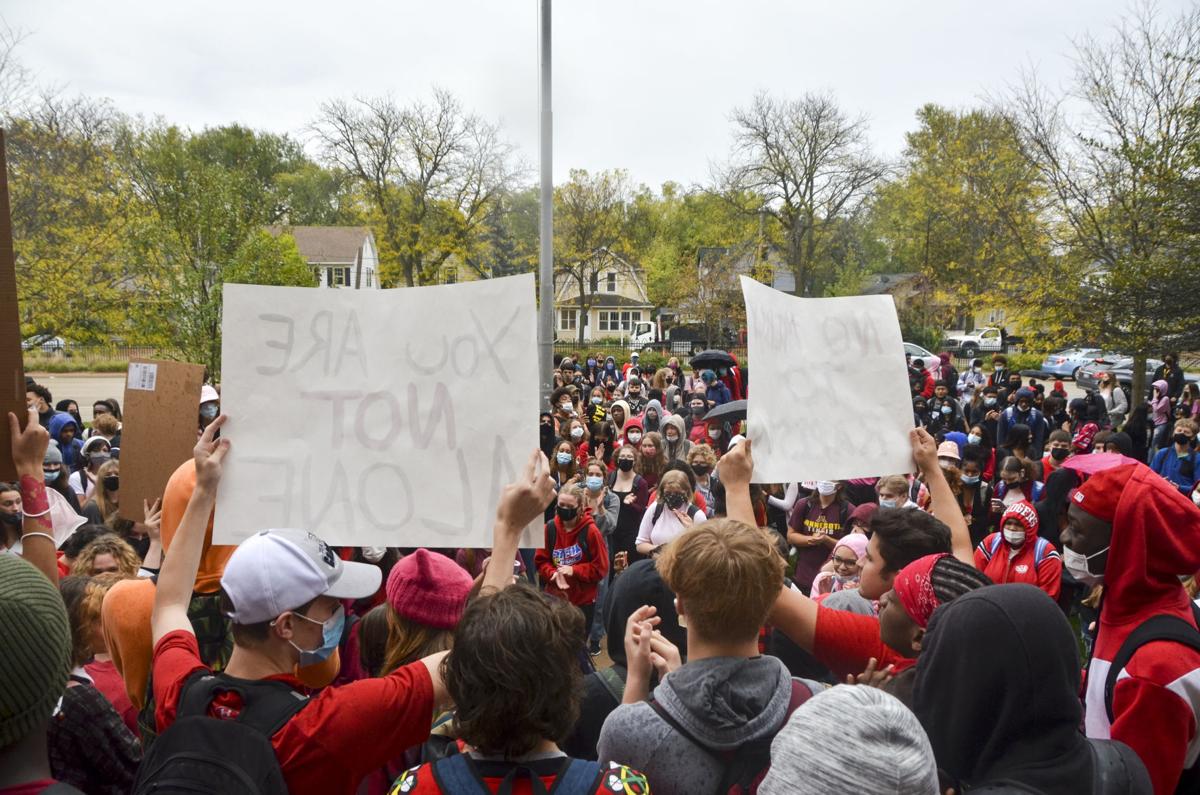 Hundreds of students walked out of East High School Wednesday to show support for survivors of sexual violence.

Hundreds of East High School students walked out of class Wednesday morning to show support for a classmate who alleges another student raped her at a party following the homecoming dance Saturday night.

Speakers stood in front of the entrance to East sharing the story of what happened, demanding a response from school administrators and leading chants in support of survivors of sexual violence. Feliz Casteneda, who hosted the party where the incident allegedly occurred and accompanied the victim to the hospital, told those gathered they were there “for justice, and this is for the victim.”

“We need him out of this school,” Casteneda, an East senior, said of the accused student.

She and others expressed disdain for the school’s response to their concerns, including from principal Sean Leavy, who took the helm as principal late this summer. Earlier Wednesday morning, Leavy sent an email to the school community apologizing for the way he spoke about sexual misconduct during an assembly last week — prior to the weekend incident — on the Behavior Education Plan.

“My response was too technical and did not meet the needs of our students and staff,” Leavy wrote. “Our team would like to thank the students who lifted their voices to challenge me to clarify my response. It takes a tremendous amount of courage to engage figures of authority and I am extremely proud of our students who have shown so much resolve in stating their concerns.”

The Cap Times requested the police report of the incident, which Casteneda said was reported to police on Tuesday night.

The Cap Times is not naming the accused because he has not been charged with a crime. The district did not immediately respond to a request for comment on the walkout.

MMSD’s Behavior Education Plan for high school students includes a provision that states “Consequences may apply to behavior that occur outside the school day and off school property only if that conduct endangers the property, health or safety of others at school or under the supervision of a school authority or endangers the property, health or safety of any employee or school board member of the District.”

Under the BEP, engaging in non-consensual sexual intercourse is a “Level 5” offense, which results in a student being recommended for expulsion from school.

Students interviewed told the Cap Times that Leavy called what they shared of the incident a “rumor” and responded to one student by asking if they had been drunk.

“The school has been incredibly uncooperative and nobody was helping us out or listening to our voices,” Casteneda said during an interview. “Our principal, when we were telling him about it, he went, ‘I know you have the name of a student that you feel committed a sexual assault,’ and we didn't feel like it; we knew that shit happened, we were there, we have witnesses.”

Casteneda said the accused student was in school on Monday, but the victim was not as she did not feel it was a safe place for her.

Lilyan Jenkins, another East senior who spoke during the rally, told the Cap Times in an interview that she is a survivor of sexual assault, rape and sexual harassment perpetrated by other students at the school. Seeing hundreds of her peers rallying in support of survivors of sexual violence was “heartwarming.”

“I feel more supported than I ever have in school,” Jenkins said. “When you're walking through the hallways of East High School, it's hard to feel like you are supported by your peers because so many bad things can outweigh the good, but when I'm looking over at this crowd of people who are yelling and supporting survivors of sexual assault, I feel so happy and safe in a school that I thought was so scary.”

Jenkins suggested the school needs to change its sexual and reproductive health curriculum to include more about “enthusiastic consent,” as well as how to report a rape or sexual assault to school officials. She offered suggestions for men who “don’t know what to do in this time.”

“The most important thing is supporting women, if people need a ride home, if they need to talk about their stories,” Jenkins said. “They just need to be open about that and to be open to having an educational conversation about sex.”

Jenkins said she and others will continue demonstrating until the administration takes action on this latest incident, including another rally planned at the school Friday. Casteneda said Friday’s rally will focus on Leavy’s response so far and the policy conversations students feel need to be had.

“What we're doing on Friday is getting as many people as we can out here just to hope for some reforms, hope that our voices are enough and hope that he listens to us,” Casteneda said.

The East community has faced other issues of sexual harassment in recent years, with former teacher David Kruchten secretly video taping students on DECA field trips. Kruchten pleaded guilty to federal charges earlier this year, and some families have continued to question the district's response to the incident.

Hundreds of students at Madison East High School and others around the district walked out of school Friday morning to demand the district improve policies on responding to sexual misconduct and help students and staff understand how to report incidents, and what happens after they report them.

East High School senior Feliz Casteneda, center, speaks to a crowd of students outside the school on Wednesday, in support of survivors of sexual violence.

Hundreds of students walked out of East High School Wednesday to show support for survivors of sexual violence.