In fall 2018, when teenager Jayme Closs was kidnapped, an office within the state Department of Justice sent a group of school psychologists, school resource officers and therapy dogs to rural northwestern Wisconsin where Jayme attended school to help the district support struggling students and staff.

Future school tragedies, which in Jayme’s case ended with the then-13-year-old escaping a man who had killed her parents and held her captive for 88 days, could receive similar assistance through a recently launched, around-the-clock resource center focused on school safety.

As the DOJ’s Office of School Safety ramps up its resource center, though, it also needs to close out millions of dollars in state grants before the end of the year and get hundreds of school buildings that are out of compliance with state law to submit safety documents.

Lawmakers created the Office of School Safety within the state’s top law enforcement agency as part of a $100 million package to increase the security of school buildings after the killing of 17 people during a school shooting in Parkland, Florida, in February 2018.

The office’s primary responsibilities were to distribute $100 million in grants for schools to make improvements, such as new security cameras or installing electronic door locks, develop general guidance on school safety and collect documents like blueprints and safety plans for nearly 3,000 Wisconsin school buildings.

Now, the Office of School Safety is expanding on the initial mandate by launching the “Speak Up, Speak Out Resource Center.”

The center will have staff available all hours of the day to consult with schools on assessing safety threats, coordinate “critical incident response teams” similar to the group sent to Barron County and — eventually — operate a statewide school threat reporting system.

“When the Office of School Safety was created, I don’t know that anybody really anticipated that we would end up where we are right now,” said Kristen Devitt, director of the office. “The programs that are coming to fruition right now, we’ve been working on them for two years.”

In March 2018, the Legislature approved $100 million in school safety grants — a measure that had overwhelming support from legislators but was criticized by some Democrats as doing too little to address gun violence — in response to the shooting at Marjory Stoneman Douglas High School in Florida.

In addition to awarding the grants, the Office of School Safety was charged with collecting several documents for every school building in the state, such as school safety plans, blueprints and documentation on when school violence drills were conducted, regardless of whether a school got a grant.

But an annual report provided this month to the Legislature’s Joint Finance Committee shows many schools are still not in compliance with the statutory requirement to submit the safety documents.

As of May — a year and a half past the deadline — blueprints and safety plans had been submitted for 86% of the nearly 3,000 Wisconsin school buildings for the 2018-19 school year. DOJ did not provide a list of noncompliant schools. 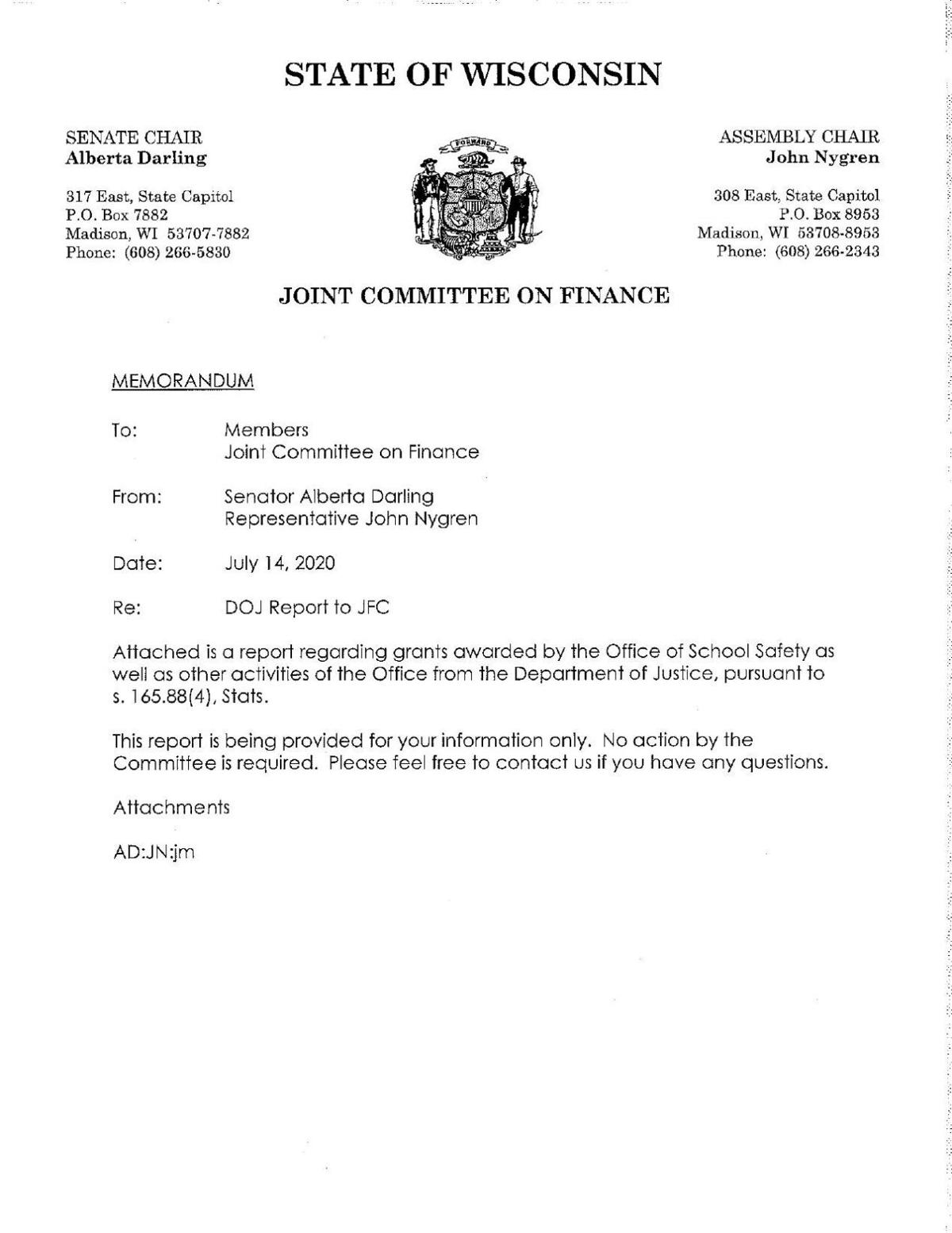 Compliance with the annual submission requirement is running under 50% for all types of documents for the 2019-20 school year, which had a Jan. 1 deadline.

“We’ve tried to communicate as far and wide as we possibly can,” Devitt said. “We are consistently and constantly doing outreach to schools to try and encourage the submission of those plans. I’ll be honest, we have heard from some places that have just said, ‘We’re not going to do it.’”

The law doesn’t include a penalty for schools not complying, Devitt said, but the office does have leverage over schools that received grants. They need to submit the documents to be fully reimbursed for the security improvements they made, she said.

The deadline to submit documents and complete required training to get the full grant amount is the end of December.

Devitt said the “lion’s share” of outstanding documents are for private schools, which she said prior to 2018 were not required to maintain a school safety plan unlike public schools.

For some private school leaders, the annual submission is viewed as repetitive, especially if documents don’t change year to year, said Daniel Henderson, communications and outreach coordinator for the Wisconsin Council of Religious and Independent Schools.

He said his organization recommends the Legislature change the submission requirement to every three years or whenever a school makes changes to its safety plans, instead of annually.

For other schools, the annual submission deadline of Jan. 1 can fall between semesters, Henderson said, and “in the shuffle of all the other deadlines and transitions, it kind of gets lost.”

But Henderson said there’s also hesitation among some schools about submitting the documents out of concern they could then be subject to open records laws.

In June, the Office of School Safety’s “Speak Up, Speak Out Resource Center” launched with five analysts and one manager.

The resource center, which is being funded by a two-year, $2.2 million federal grant, will have four main functions when it’s fully operational:

The resource center was not a specific mandate of the Legislature, Devitt said, but the office was given general leeway to develop guidance on school safety, which led to the idea of a continually staffed resource center.

Several other states, such as Colorado, Michigan and Nevada, operate similar centers.

A confidential threat reporting system is not yet running, Devitt said, but the goal is to launch it this year. When it’s operational, people will be able to call the resource center or report online — confidentially — threats of school violence.

The 2018 law mandates school staff report threats of school violence to law enforcement, but Devitt said students may feel uncomfortable telling a staff member something they heard another student say.

After analyzing the call volumes of other states with threat reporting systems, Devitt said the peak times fall outside school hours.

“Students will feel more comfortable reporting information when they’re away from the watchful eyes of other students or staff members,” she said. “A threat can be made overnight, certainly, they can be posted on social media, so we would want to respond to that.”

Henderson said his organization hasn’t received feedback from the private schools it represents on the resource center, but he said, generally, the more resources available to schools, the better.

“Even in a time of a pandemic, we should be always keeping school safety in mind, especially since some schools will be doing hybrid models,” Henderson said.

Devitt said the resource center will also be in charge of responding to schools experiencing crises with “critical incident response teams.”

The center would be able to send a team now, but Devitt said to make it most sustainable, 12 regionally based teams will be established to be called upon if a violent incident happens at a nearby school.

A coordinator still needs to be hired for the program, and the regionally based teams will need to be trained, Devitt said. Ideally, it’ll be running at full capacity by the start of the 2021-22 school year.

The district will keep working with Madison Teachers Inc. on a proposal to switch to qualifications-based layoffs, which the union worries cou…

The Madison School Board chose Carlton Jenkins, a superintendent of a suburban Twin Cities school district, over another finalist for the job.…

The School Board approved Monday using close to $500,000 to shore up its elementary and middle school online math instruction from the $8.2 mi…

Monona Grove, Verona and Waunakee are largely going with an online start to the school year, while Edgerton will allow parents to choose optio…

During a "virtual reception" Tuesday, community and faith leaders offered support and advice to Jenkins who said he's "ready to go to work" ad…

The COVID-19 pandemic has put new stressors on students and their mental health, could lead to larger losses of learning, and poses challenges…