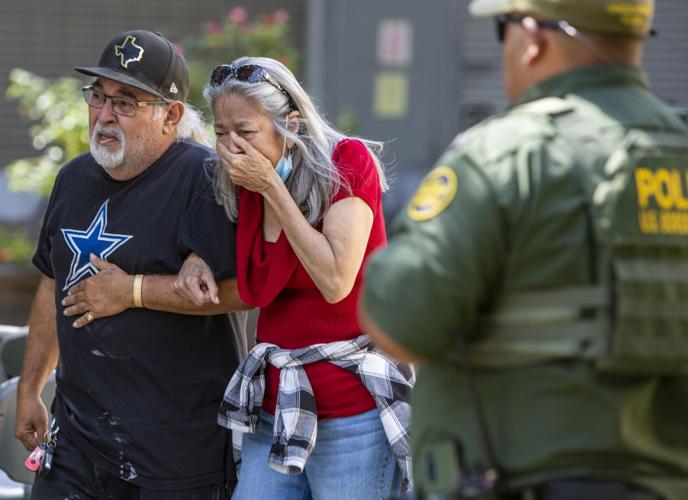 A woman cries as she leaves the Uvalde Civic Center, Tuesday in Uvalde, Texas. 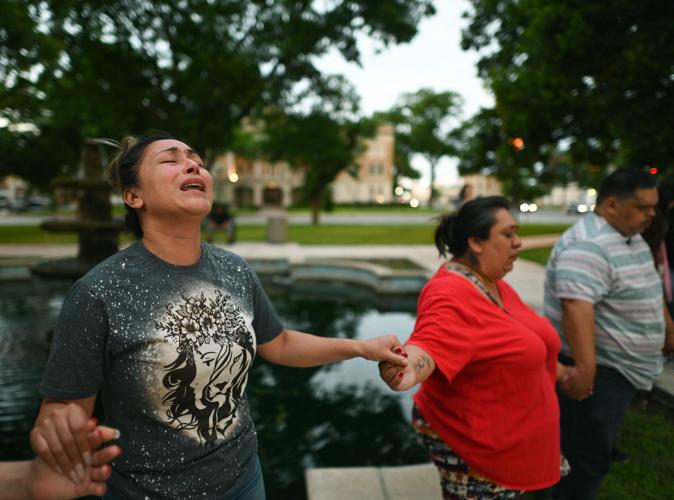 Kladys Castellón prays during a vigil for the victims of a mass shooting Tuesday at Robb Elementary School in Uvalde, Texas.

The Dane County Sheriff’s Office said Wednesday it is increasing police presence around schools in the wake of Tuesday’s mass shooting at a Texas school.

An 18-year-old gunman killed 19 children and two teachers at a Texas elementary school after he barricaded himself inside a single classroom and “began shooting anyone that was in his way,” Lt. Christopher Olivarez of the Texas Department of Public Safety said Wednesday on NBC’s “Today.”

Law enforcement officers eventually broke into the classroom and killed the gunman.

Olivarez told CNN that all the victims were in the same fourth-grade classroom at Robb Elementary.

The killer “barricaded himself by locking the door and just started shooting children and teachers that were inside that classroom,” he said. “It just shows you the complete evil of the shooter.”

“There are no words to describe the devastating news of yesterday’s school shooting,” Dane County Sheriff’s Office spokesperson Elise Schaffer said in a statement, adding the incident serves as a reminder to be aware of one’s environment.

The Sheriff’s Office offers Emergency Preparedness Training for the community that can be scheduled online at go.madison.com/preparedness-training.

As teachers and parents around the country struggled to explain the tragedy to children, top educators joined Democrats and others in calling for reforming gun laws in Wisconsin and nationally.

“The painful fact that gun violence and other societal challenges continue to spill into our schools requires me to engage in issues that extend beyond traditional school policy,” state Superintendent Jill Underly said in a statement. “The education of Wisconsin students and the safety of our children and educators in our schools must be addressed — not tomorrow, not next month, and not after the next loss of life.”

“Communities, business, elected officials, and educators need to work in collaboration to provide the necessary laws and resources to keep our children and communities safe,” he said, adding that students depend on them to live in a world that is “safe from a persistent threat of violence, and in a place and time where human decency is the fabric of society.”

From the more than 240 stories I published in 2021, here are five that stand out in my mind for various reasons, because of their unusual subject matter, popularity among readers or the lasting impact the subjects of those stories will have. Most are different from the usual things I encounter in the courts every day.

Edgewood High School's football team was in the WIAA playoffs when it was disqualified for having an ineligible player.

This was one of the more unusual cases I covered this year.

Madisonian fixes bikes for those who do good deeds

Amid days covering unspeakable tragedy, it was a wonderful diversion to meet Alan Crossley, a volunteer with Wheels for Winners.

A state Supreme Court decision put the drunken driving homicide case against Dawn Prado, pending since 2015, back on the Dane County docket.

The gun a teen brought to La Follette High School on Monday was a facsimile, Madison police reported.

The girl initially told a detective the two only had sex once, but later admitted it happened four times, according to a criminal complaint.

The woman bit the officer while being arrested on a felony warrant near downtown Janesville early Tuesday.

Before fire crews got to the scene neighbors had already put out the fire which started on a stove top burner.

A woman cries as she leaves the Uvalde Civic Center, Tuesday in Uvalde, Texas.

Kladys Castellón prays during a vigil for the victims of a mass shooting Tuesday at Robb Elementary School in Uvalde, Texas.