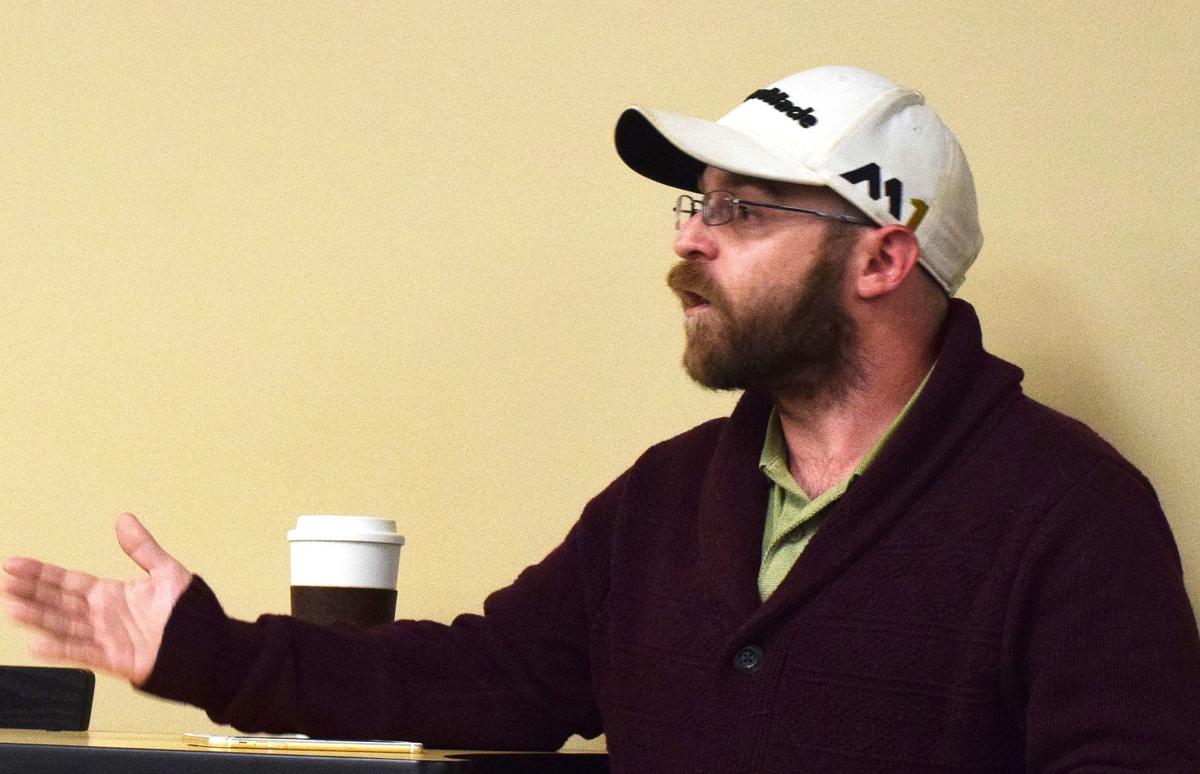 District resident Stefan Mackiewicz addresses the Sauk Prairie School Board about the controversial book in the ninth grade English curriculum on May 8. 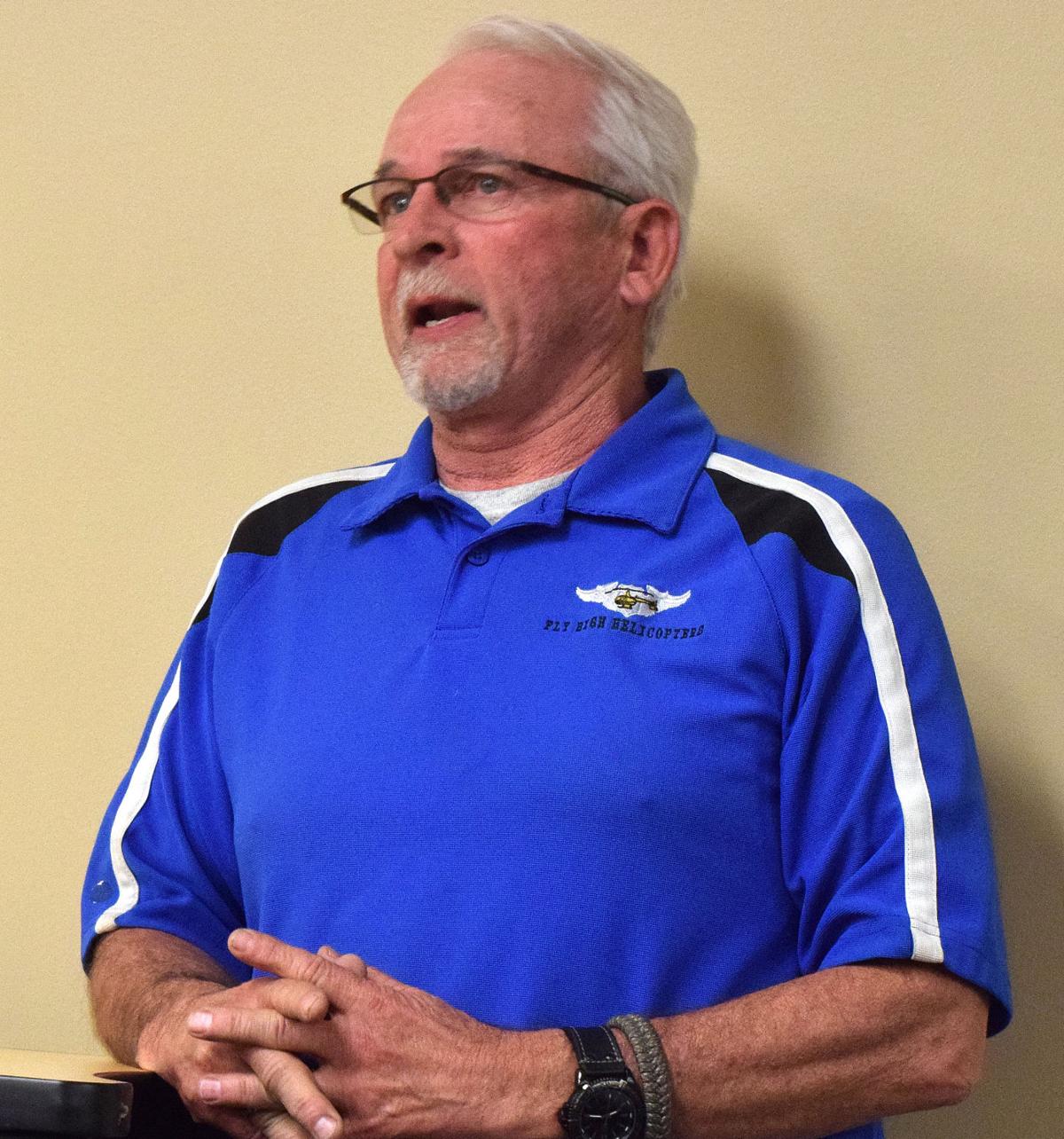 Sauk Prairie School District resident Eric Peterson talks to the school board about a controversial book in the high school's curriculum during a school board meeting May 8.

Controversy over a required reading book at Sauk Prairie High School drew a large enough crowd to require extra seating at the May 9 School Board Meeting.

Most of the people came to share their opinion about a controversial book in the ninth grade curriculum at Sauk Prairie High School, “The Absolutely True Diary of a Part-Time Indian” by Sherman Alexie.

The book was listed as one of the most banned or challenged books of 2014 as cited by the L.A. Times. It chronicles the life of the character Junior, a 14-year old budding cartoonist who lives on a Spokane, Washington Indian reservation. It is controversial for having what some deem anti-family sentiments, cultural insensitivity, drugs, alcohol, smoking, gambling, and offensive language, sex education, being unsuitable for the age group, depicting violence and bullying.

Despite this, many people — including students, parents and even a local pastor — spoke on behalf of keeping the book in the high school’s curriculum.

Dennis Virta, a local pastor, said he’s thankful for teachers who forced his kids to read some books that they didn’t want to read.

“I was forced to read a book some people are offended by,” he said. “I call it an equal opportunity offender. It offends Muslims, Christians, Jews, Atheists, in that book there are seven suicides, genital mutilation, hundreds of murders, incest, rape, and one ultimate injustice. And if we are going to ban a book, this would probably be the most offensive book — and I read it every day — the Holy Bible.”

Sauk City resident Grace Breunig, a freshman at Sauk Prairie High School, said she was astonished to learn the book was even being considered to be banned.

“This book showed ways to express yourself through art, reading and sports, which is stuff we can all relate to,” she said. “Today kids express themselves a lot through social media. But this book showed there are lots of other ways to do so.”

Mary Dickey said she found the book to be wonderful.

“To me it was about a boy who faces incredible challenges … he faces life with courage and imagination,” she said. “He survives and overcomes. I was very impressed with it.”

She said if parents think it is problematic for their children there was the opportunity to opt out of it.

“I don’t think other people’s children should be kept from reading it,” she said.

Kassie Baron, a former Sauk Prairie High School student, said the point of literature is to teach students empathy and how to empathize with people whose situations are not their own.

“I think even if you do oppose this book that’s fantastic, your child should be learning those critical thinking skills in order to be able to articulate their opposition to a topic,” she said.

While the majority of people at the meeting spoke in support of the book, there were those who still felt it was inappropriate for youth.

“With the excellent literature available to complement their excellent lesson plans, why would our five-star teachers want to use a three-star book?” said Kay Ringelstetter. “Especially a book known to be banned in many communities. This makes no sense to me.”

“The book I feel could be a great learning experience for anyone … the notes that went home to parents simply stating the book had mature content and adult language … How can we tolerate being uninformed?” said Nick Ringelstetter. “The only way to solve this conflict in the future is to have a policy where teachers are honest with parents and give them a good option.”

One parent said her son is in seventh grade and will not be attending Sauk Prairie High School next year.

“This year I got a letter saying he was reading banned books,” Robin Ballweg said. “It’s a joke. Now I get to hear snide remarks about drugs and jerking off and things like that. And this is the same boy who is an altar boy at church. This is not something I want him to think is OK or normal.”

Jeff Virchow said it’s important for people in smaller towns to learn about the world around them so they know what issues are facing others.

Virchow said he doesn’t support banning the book, but does support ways the district could have better communicated the book’s contents.

A formal complaint was issued to the district by a parent during the second semester. As per district policy, a committee was then formed to review the complaint. The committee included members of the district staff as well as several parents in the district.

The committee voted 8-5 in favor of keeping the book in the district’s curriculum. Sauk Prairie School District Superintendent Cliff Thompson is now charged with the task of making a recommendation to the school board about whether or not to ban the book or keep it as part of the high school’s curriculum. Thompson said he will have that recommendation at the board’s next regularly scheduled meeting, May 22.

"The way the school and the police handled my case was almost as traumatizing as the assault that occurred," the student said.

Madison police and school district data offer a mixed picture of what's happening this year with no police officers stationed inside schools.

Conversations with students between classes that helped Marianne Matt realize her calling.

COVID cases across Dane County have increased nearly 49% over the past two weeks, while hospitalizations connected to the virus have increased 10% according to data collected by Public Health Madison and Dane County.

The board also plans to form an ad hoc committee, which will focus on safety and engagement, to bring together parents, students and community members, and will be chaired by board member Ananda Mirilli and East student body president Gordon Allen.

The team's slogan is: “Come have some fun, and see the Robot run.”

Through the course, students will learn about research and evaluation writing before they create and present their own evaluation projects. The three college credits will be transferrable to any four-year college or university should a student decide not to study at UW-Madison, Capital High principal Quinn Craugh said.

Portage public school leaders are touting several changes this year that they say should help improve student scores and meet other goals.

The district is promising increased staff supervision during school opening, lunch and dismissal times, and will work with student leaders to prevent future flare-ups.

District resident Stefan Mackiewicz addresses the Sauk Prairie School Board about the controversial book in the ninth grade English curriculum on May 8.

Sauk Prairie School District resident Eric Peterson talks to the school board about a controversial book in the high school's curriculum during a school board meeting May 8.