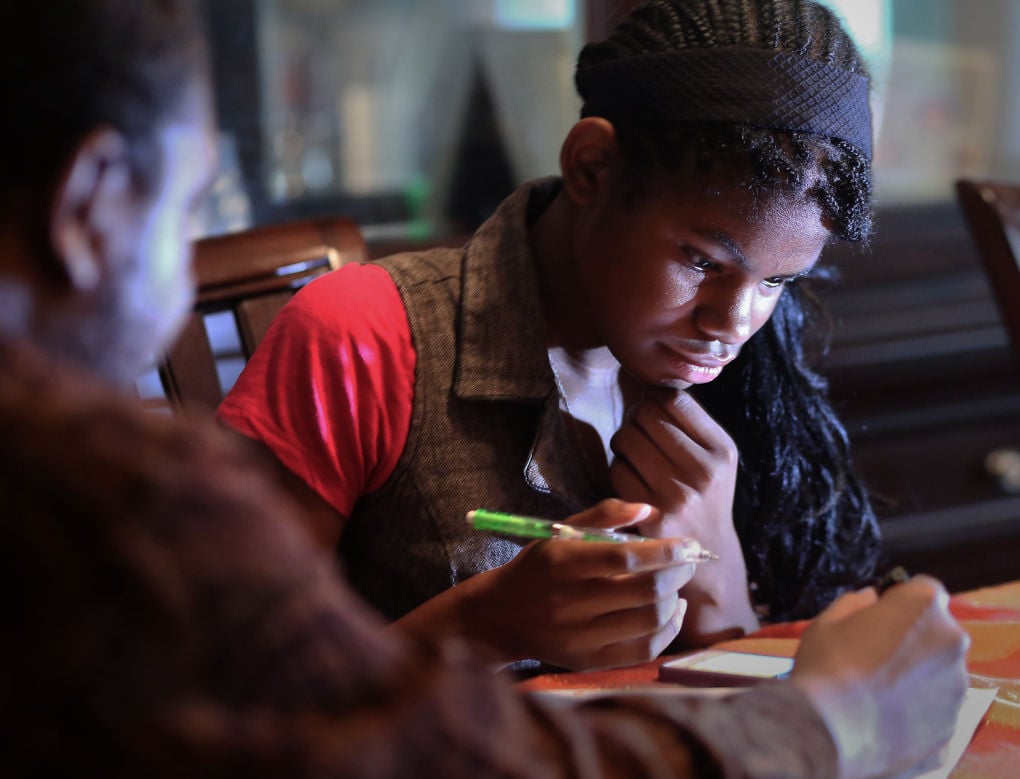 Madison West High School freshman Eriana Thomas works on an algebra assignment with her father, Camara Stovall, at their home. He had hoped she could be enrolled in a pre-algebra class, but West doesn't offer one. 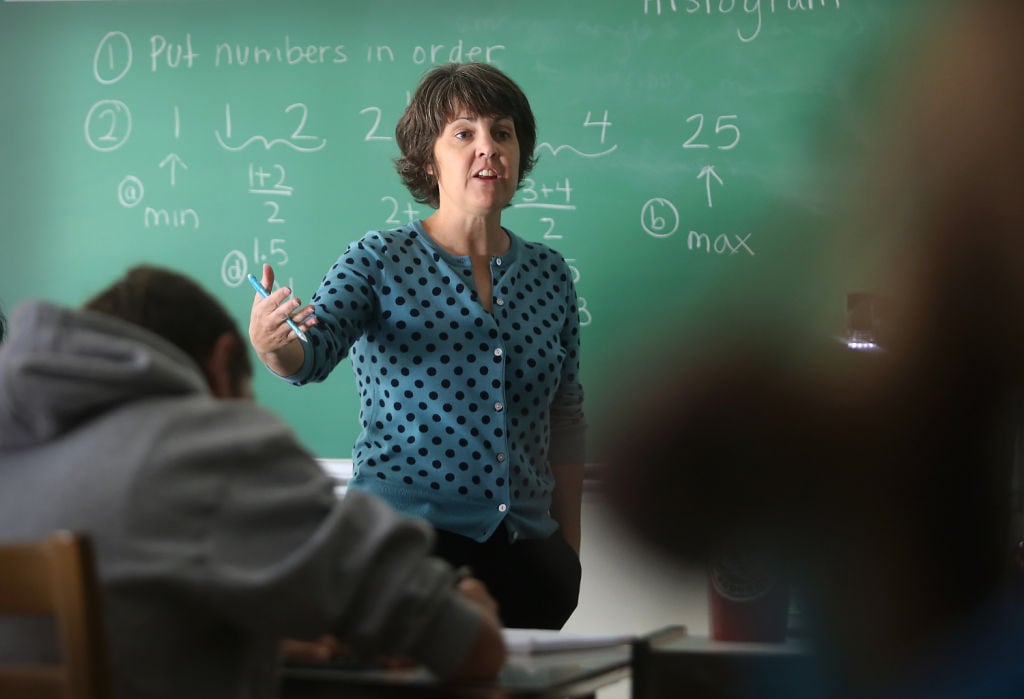 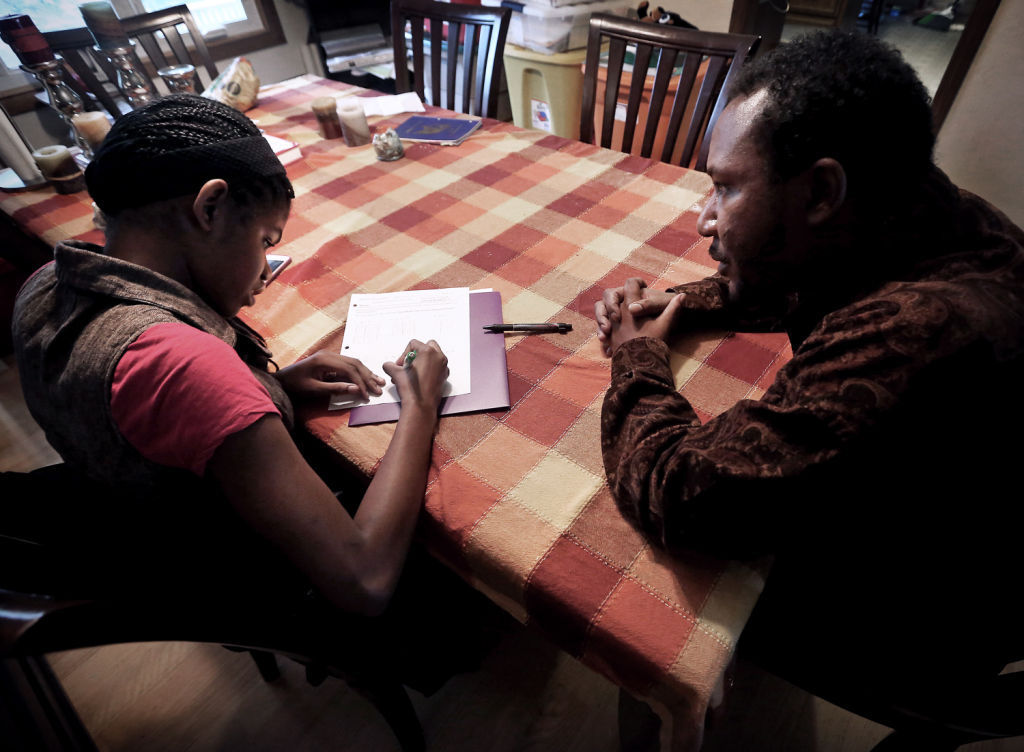 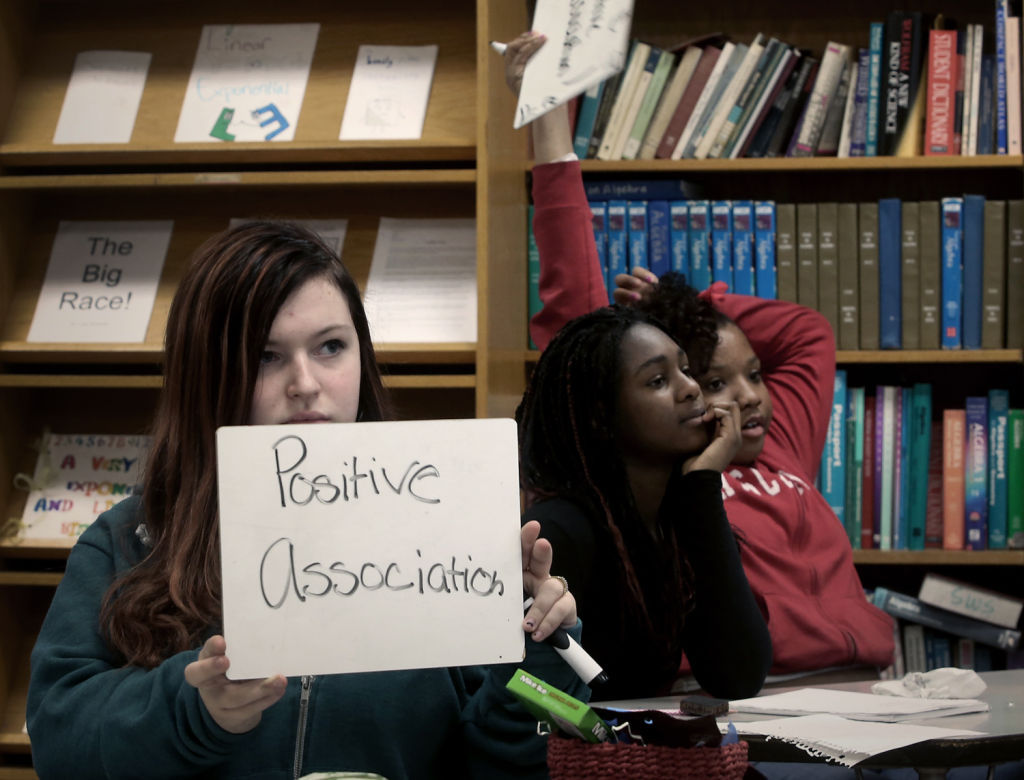 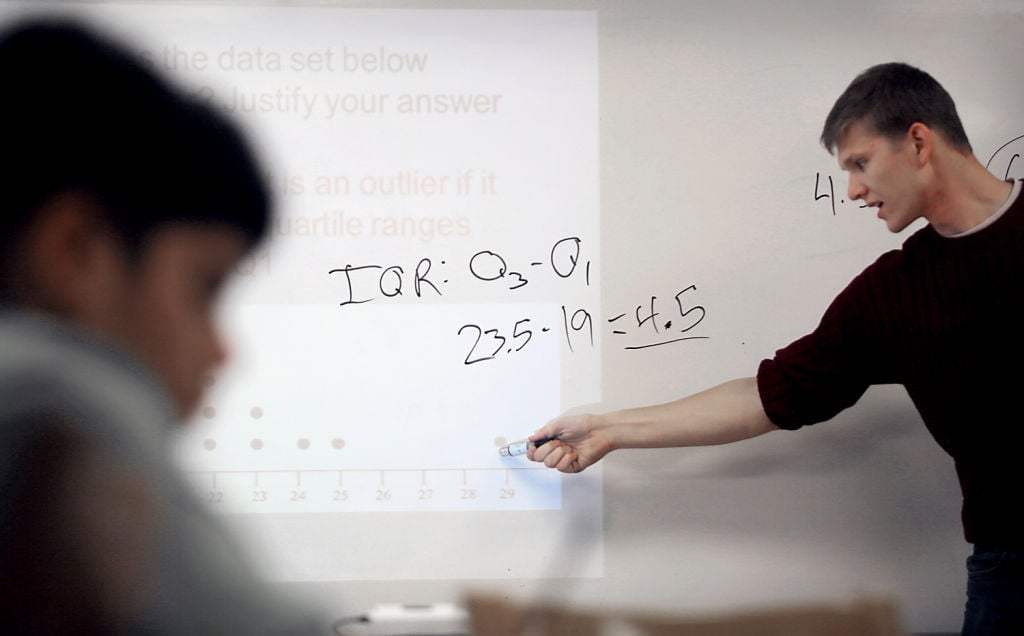 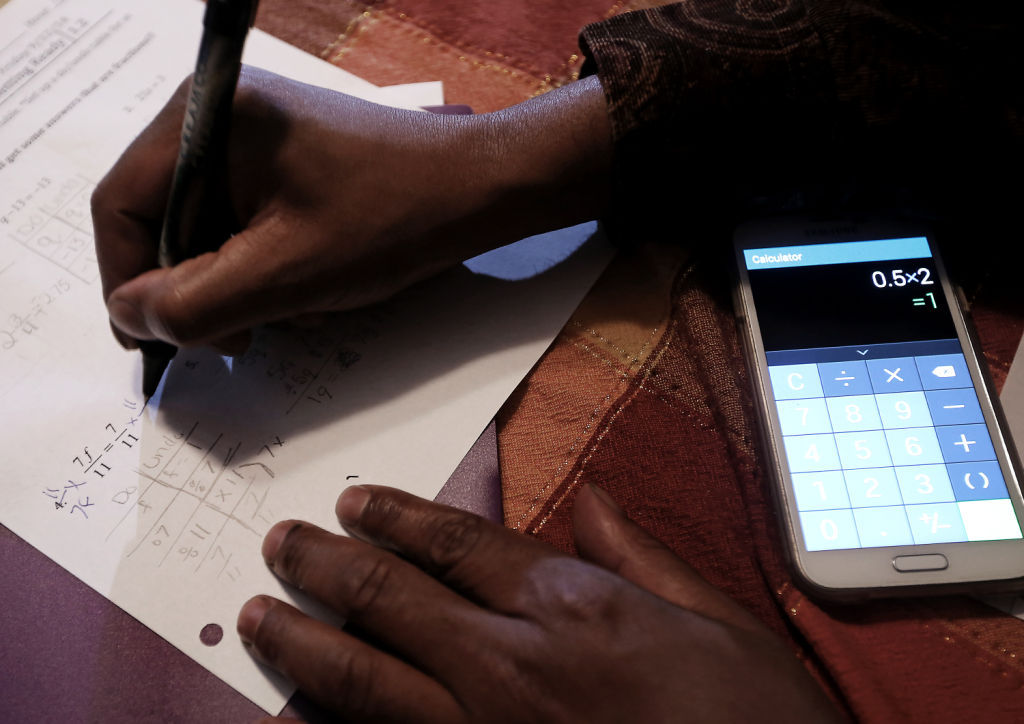 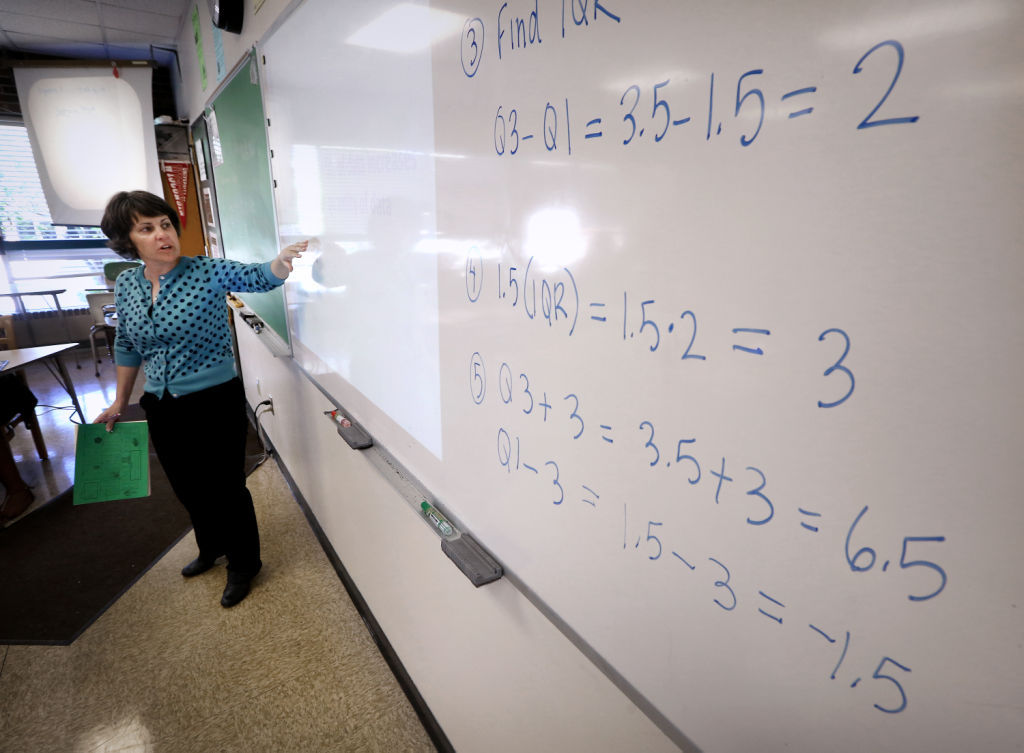 Eriana Thomas has always been a good student.

Her teachers at Wright Middle School recognized her as a strong debater, and she consistently made honor roll. But math was not her best subject.

Her father, Camara Stovall, an elementary teacher in the Madison School District, knew this. So when he enrolled the 14-year-old freshman at West High School this year, he hoped she could take pre-algebra and move on to algebra her sophomore year.

Instead, he was left with one thought: “I feel like I’m setting my own child up for failure by enrolling her in high school.”

That’s because there is no introductory class for students like Eriana at West. Rather, freshmen must take the more rigorous algebra — the foundation for future math studies that is a graduation requirement.

Data show, however, that Madison freshmen fail algebra more than any other ninth-grade course. And a single failed class makes it much more likely that a student won’t graduate, according to a district study.

As a result, Superintendent Jennifer Cheatham called for a review of middle school curriculum and more help for students in ninth grade — especially in math.

“When you look at the data, there’s something not working, clearly,” she said. “And if you know being on track in ninth grade is key to a student’s success then it’s our obligation to change that.”

She said the district will be strengthening the quality and consistency of algebra instruction across schools so that courses in each school approach the class the same. After the district’s review of high school curriculum is complete, the ninth-grade algebra requirement and graduation requirements could change.

Like Madison, districts across the state are looking at ways to improve rates at which students pass algebra and are also developing new curriculum that includes algebraic concepts as early as kindergarten, said Department of Public Instruction spokesman Tom McCarthy.

Signe Carney, who has taught math at Memorial High School for 18 years, said part of the reason for the algebra failure rate is that “people are OK with saying, ‘I’m bad at math,’ and they will never say they can’t read. People think they can or can’t, and if they think they can’t, they won’t succeed.”

Another factor is that algebraic concepts build on each other, so it’s hard to catch up if students miss days, she said.

More than a decade ago, the district required all ninth-graders to take algebra to eliminate the disproportionate rate minority and special education students were taking introductory courses and to improve their access to college-prep math courses, according to Tracy Carolan, a former district math teacher and UW-Madison doctoral student who has studied the district’s algebra program.

Carolan studied two cohorts of about 4,000 students — the 2004 graduating class, the last group of students that had the option of pre-algebra, and students who graduated in 2008, freshmen during the second year of the algebra-for-all requirement.

“It became clearer that, paradoxically, the very students who seemed to be the most negatively affected in my own classes were those whom the policy was designed to help,” ﻿Carolan said.

Carolan said, however, some students who would have been placed in pre-algebra thrived in algebra.

Last school year in Madison, more than 250 ninth-grade students received an F for at least one semester of algebra. East High School’s freshmen had the highest number of failures at 34 percent of the class. La Follette had 26 percent of its freshmen fail, while Memorial had 20 percent fail and West ﻿had 18 percent ﻿.

The impact of just one F during a student’s freshman year dramatically reduces the likelihood of graduating in four years — especially for black students — according to the district’s study.

Sixty-five percent of white students with one or more Fs in ninth grade graduate in four years, while 45 percent of black students do.

Stovall worries what this means for his daughter and his two younger children who will enroll at West.

He said he sees a disconnect in curriculum between elementary and middle school, and middle and high school﻿, which may have contributed to his daughter being ill-prepared to take the only math class available to her.

“She’s a little bit more prepared than I was at the time,” Stovall said. “But we still felt she would be better taking pre-algebra and getting a good grade and having the confidence before going to algebra.”

Coordinator Chris Castillero said research shows that lowering standards doesn’t work and that the district will be ensuring algebraic concepts are interwoven into a variety of lessons throughout elementary and middle school. The Common Core State Standards for math are “cohesive” in that way, he said.

“Is putting more pre-algebra in the high schools the answer to our algebra problem? Absolutely not. That never works,” he said. “Algebra is a topic we (should) integrate into all of our courses.”

Carolan said while teaching math at La Follette and West ﻿, she observed students “absolutely decimated after taking algebra.” They would often need summer school or more than one semester of algebra to pass it.

“It just becomes encoded in them that they are horrible in math and I feel that is such a tragedy,” she said. “We certainly can’t go back to the days of having all students of color being recommended for pre-algebra but at the same time, we’re truly ruining people through this policy and there has to be a different way to do this.”

Memorial allows some students to take algebra over two years, but Carolan said that does a disservice to students who should be taking college-prep courses to be ready for the junior-year ACT and SAT exams that test students on three years of math.

Carney said many students in the two-year course have special needs. Memorial’s algebra teaching team designs course work around the needs of each class, provides after-school tutoring and developed a math and science course for students who need help in both subjects, she said.

She said the district should direct as much attention to math achievement as it does literacy.

“We’ve had a strong literacy push for a long time, and now it’s time to look at math,” Carney said.

“There’s some type of sequencing and preparation that is obviously not linked, and I think (the district) is all over that,” he said. “With so many not doing well, (it)clearly suggests that in sixth, seventh and eighth grade, we’re not doing something right.”

Board member T.J. Mertz proposed adding more math instructors to the district’s annual budget, but it was voted down.

School Spotlight: 'A Raisin in the Sun' sparks discussion on discrimination

'I never had a teacher that looked like me': Challenges exist in hiring a diverse staff

Minority students say they have fewer role models in the school building.

The Madison School District has spent about $5.2 million in the last five years on the program that provides extra reading instruction for first graders who have low proficiency in reading.

Fourteen schools will have new principals this school year.

Not all students have the same access to advanced courses and electives, which could be a symptom of gaps in achievement.

Madison West High School freshman Eriana Thomas works on an algebra assignment with her father, Camara Stovall, at their home. He had hoped she could be enrolled in a pre-algebra class, but West doesn't offer one.