BARRON — A Wisconsin man accused of abducting 13-year-old Jayme Closs and holding her captive for three months made up his mind to take her when he spotted the teenager getting on a school bus near her home, authorities said Monday.

Jake Thomas Patterson, 21, told detectives that “he knew that was the girl he was going to take,” and he made two aborted trips to her family’s home before finally carrying out an attack in which he fatally shot Jayme's mother in front of her, according to a criminal complaint filed hours before Patterson's first court appearance.

Prosecutors charged him with kidnapping Jayme and killing her parents Oct. 15 near Barron, about 90 miles northeast of Minneapolis. He also was charged with armed robbery.

Investigators believe Patterson hid Jayme in a remote cabin before she escaped on Thursday. Police have said the two did not know each other.

Patterson sat expressionless during the court appearance, which he made via video feed from the county jail. He spoke only to acknowledge that his name and address were correct on paperwork and that he agreed to waive a speedy preliminary hearing. The judge set bail at $5 million.

Patterson went to the home twice intending to kidnap Jayme, but broke off one attempt because too many cars were in the driveway and called off another because the house was too active, the complaint said.

On the night she was abducted, Jayme told police, she was asleep in her room when the family dog started barking. She saw there was a car in the driveway and woke her parents. Her father, James, went to the door, the complaint states, and a man with a gun was at the door.

She said she and her mother, Denise, hid in the bathroom, clutching one another in the bathtub with the shower curtain pulled shut. They heard a gunshot, and Jayme knew that James had just been killed, according to the complaint.

Denise Closs started to call 911. Patterson broke down the bathroom door. Jayme said he was dressed in black, wearing a face mask and gloves and carrying a shotgun.

Patterson told her mother to hang up and ordered her to tape Jayme’s mouth shut. He told detectives that Denise Closs struggled with the tape so he wrapped the tape himself around Jayme’s mouth and head. He then taped her hands behind her back and taped her ankles together before pulling her out of the bathtub and shooting her mother in the head.

He dragged Jayme outside, nearly slipping in blood pooled on the floor. He threw her in the trunk and drove off, pausing to yield to three squad cars speeding toward the house with flashing lights, the complaint said.

The entire attack took four minutes, he said, according to the complaint.

Patterson took her to a cabin that he said was his. He told police he ordered a weeping Jayme to strip and dress in his sister's pajamas, saying he had to get rid of the evidence. He then threw her clothes into a fireplace in the cabin's basement.

He said Jayme tried to get out twice. The first time he screamed and banged the wall and made her so scared that he thought she would never try it again.

Whenever he had friends over, he made clear that no one could know she was there or “bad things could happen to her,” so she had to hide under the bed. He sealed her under the bed with tote boxes and weights so she could not crawl out, according to the complaint. She had to stay under the bed whenever he left the house, sometimes going for hours without food, water or bathroom breaks.

When his father visited, Patterson told investigators, he turned up the radio in the bedroom to cover any noise she might make.

He said he assumed he had gotten away with the slayings and kidnappings after two weeks went by. He told detectives that on the night of the kidnapping he put stolen license plates on his car and removed an anti-kidnapping release cord from his trunk. He also shaved his head so he would not leave hair behind and chose his father’s Mossberg shotgun because he thought it was a common model that would be hard to trace.

Patterson, who has no criminal history in Wisconsin, was described by people who knew him as a quiet and good student who participated in quiz bowl in high school. He wrote in his high school yearbook of wanting to join the Marines. On Monday, a spokeswoman for the Marines said Patterson lasted just a little more than month in the corps before washing out in October 2015.

Patterson told detectives he worked at the Saputo Cheese Factory near Almena for two days before quitting. The company did not immediately respond to messages from The Associated Press.

His defense attorneys, state Assistant Public Defenders Charles Glynn and Richard Jones, said they believe Patterson can get a fair trial, but they are not sure where, and they have said they might seek a change of venue.

Patterson’s relatives, including his father, Patrick, declined to comment after the hearing.

After Jayme’s disappearance, police collected more than 3,500 tips, but no hard leads emerged.

Then on Thursday, a woman walking her dog spotted Jayme along a road near Gordon, a town about an hour's drive north of Barron. The woman said the girl begged her for help, saying Patterson had been hiding her in a nearby cabin and that she had escaped when he left her alone.

Neighbors called 911, and officers arrested Patterson within minutes, as he drove around the rural area searching for her.

Authorities said that when Patterson had left the remote cabin on that 88th day of her captivity, she finally made a break for freedom, putting on Patterson's sneakers so hastily that they ended up on the wrong feet. 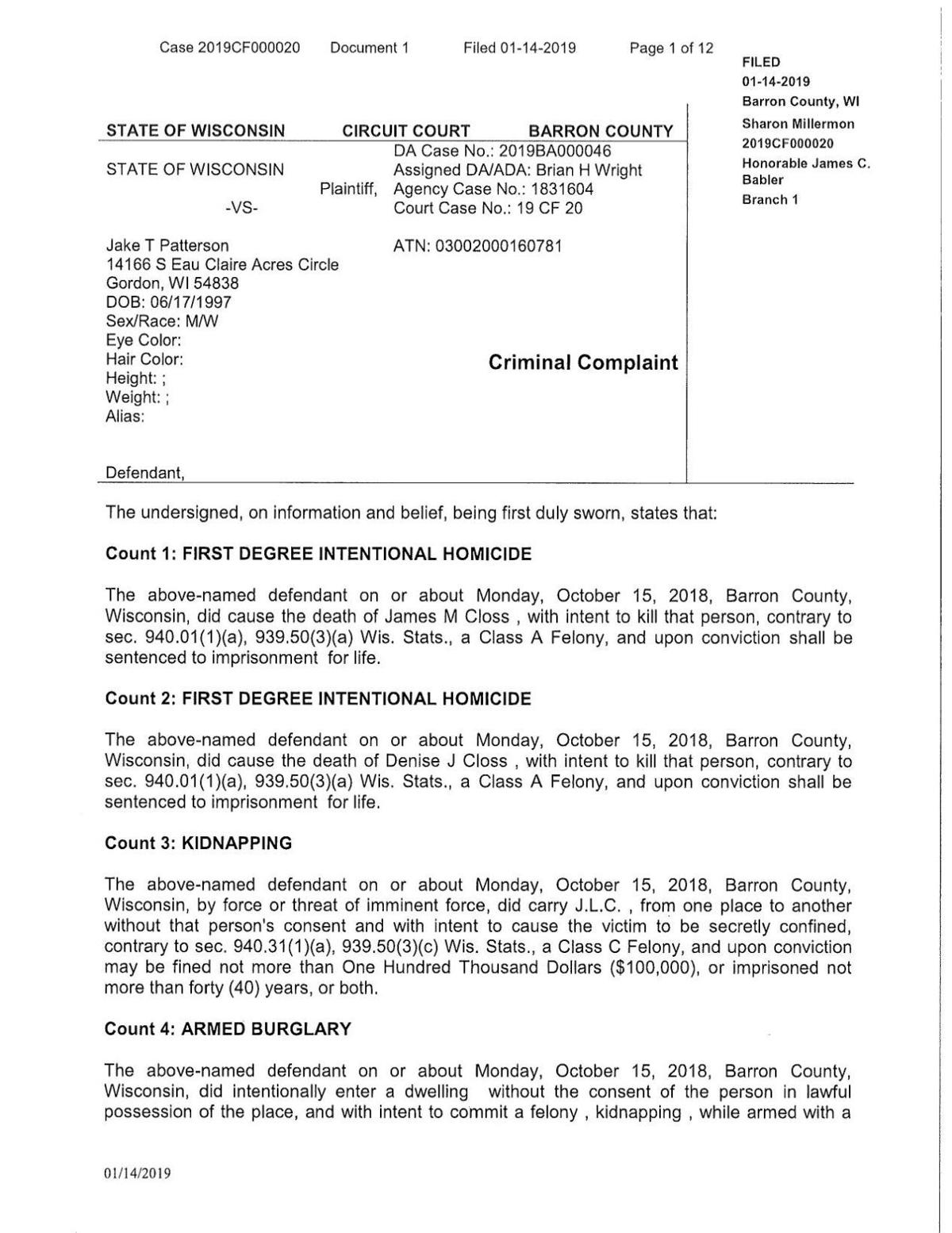 The New York Post published photos of the cabin Monday. The images showed a shabby living area with a couch, refrigerator, an old television set and an unfinished ceiling. Exterior photographs show a lean-to loaded with firewood, a three-car garage and an empty box of adult female diapers in a trash can. A sign over the cabin’s front door reads “Patterson’s Retreat.”

Authorities have not said whether Jayme was sexually assaulted. The complaint does not charge Patterson with any form of sexual assault. The narrative in the document does not say what Patterson did with her.

Prosecutors said they expect to release more information on the case before Patterson’s next hearing on Feb. 6 and that additional charges could be brought in the county where Jayme was held. They gave no details.

Barron County District Attorney Brian Wright declined to say more about Patterson’s motive after the hearing. But he praised Jayme for surviving.

“She’s 13 years old, and if you read the criminal complaint, you can see the amount of control that he was exerting over her. And at some point, she found it within herself at 13 years old to say, ‘I’m going to get myself out of this situation.’ I think it’s incredible.”

Couple who aided Jayme Closs doesn't want $50,000 reward because she 'got herself out'

Closs escaped and is home safe now and her alleged abductor is in jail, but unease lingers. How does a community guard against such an arbitrary crime? And how can anyone feel safe again?

'He was a normal person': How did Jake Patterson's life lead to Jayme Closs?

What could possibly have transformed this lean, prematurely balding and reserved young man into the alleged perpetrator of a brutal crime that shocked a nation?

Decision to add charges in Jayme Closs case will be sensitive

While seeking the truth, prosecutors will be balancing several other objectives.

“There are some things that Jake Patterson can’t take away,” 13-year-old Jayme Closs said in her statement. “He can’t own me.” 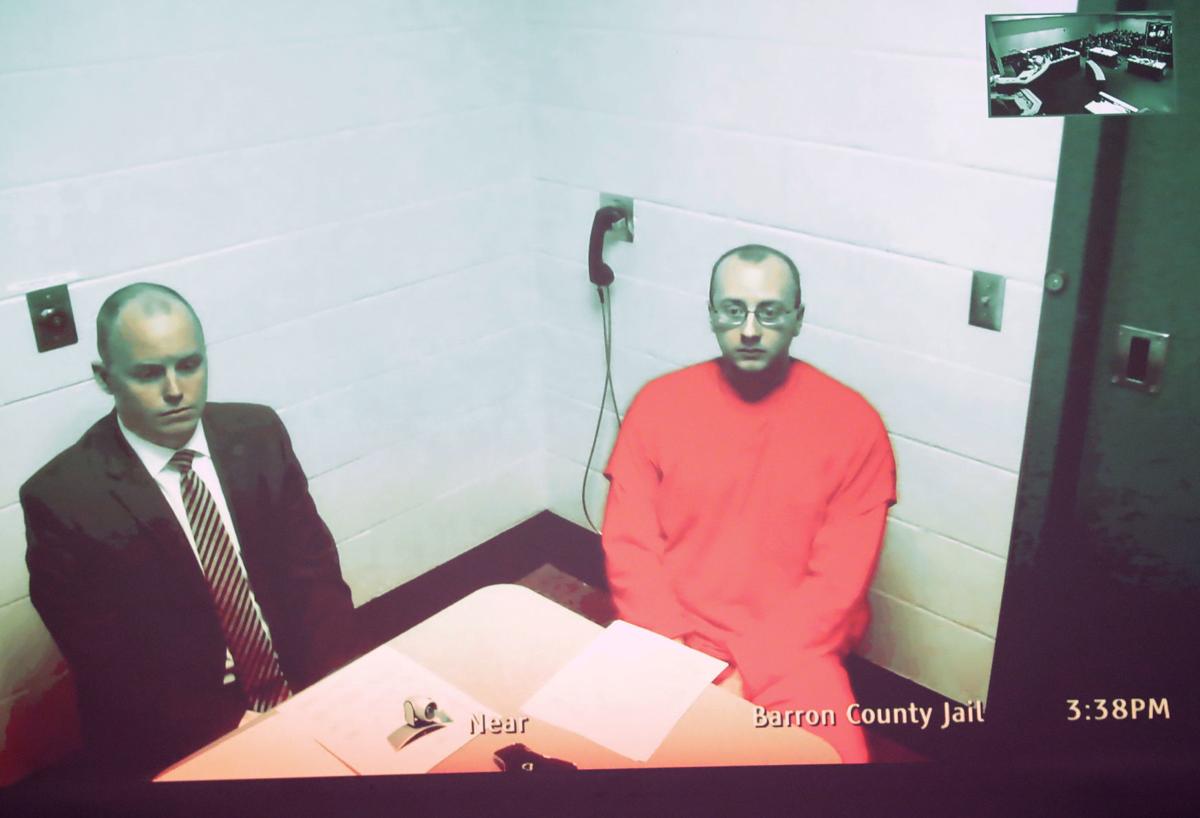 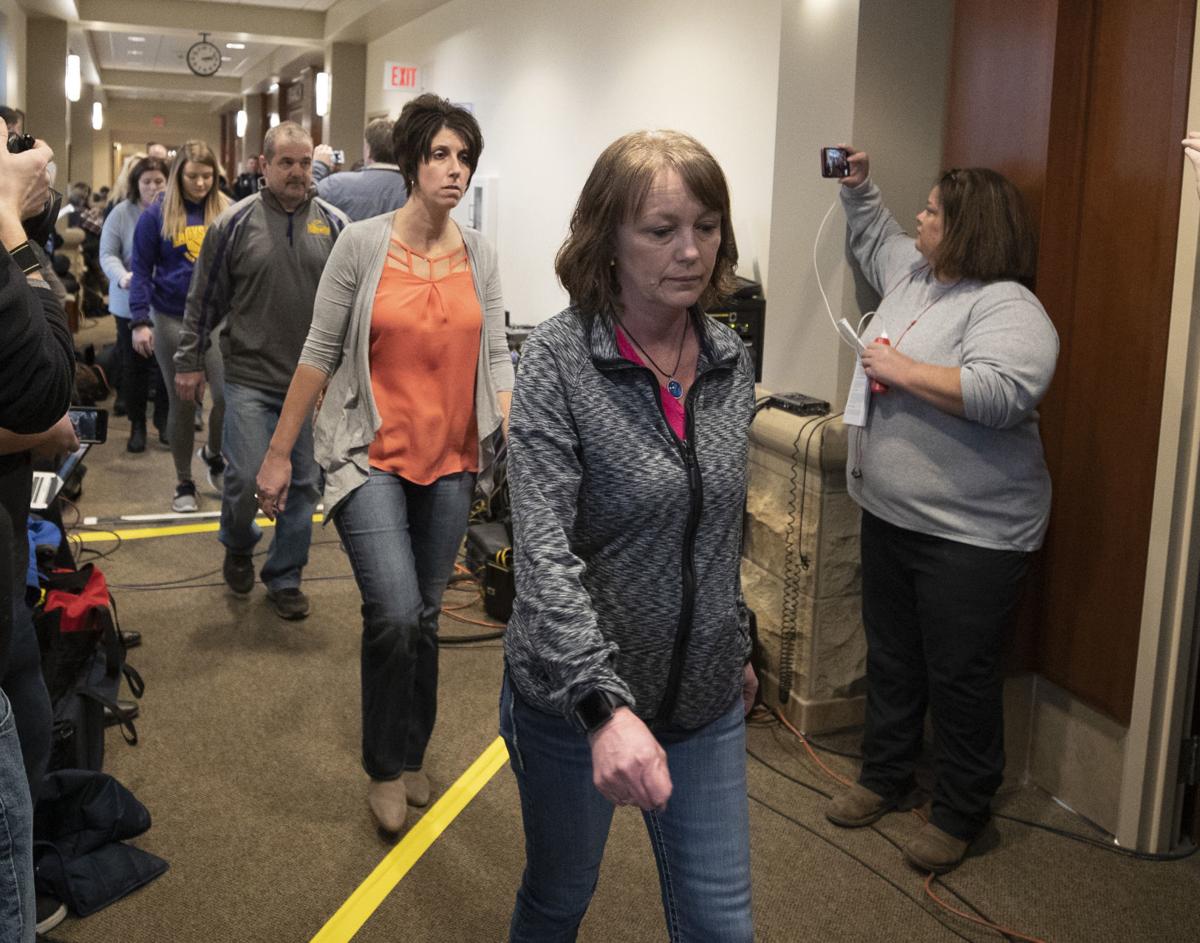 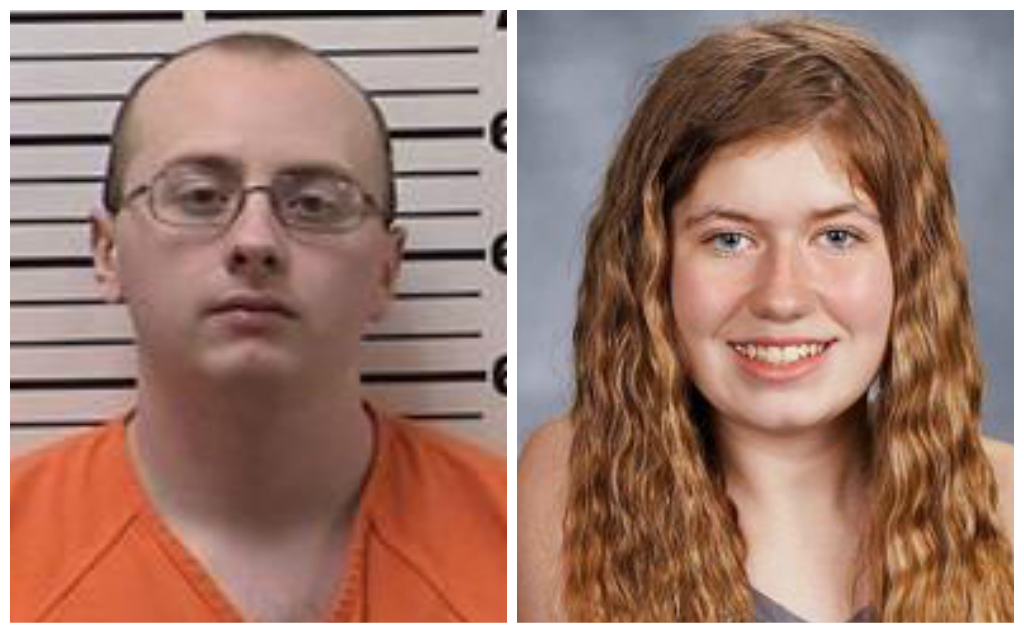