The lone remaining parent suing the Madison School District over its policy concerning the gender identity of students cannot sue the district because she has not identified any harm she’s suffered or is likely to suffer as a result of the policy, a Dane County judge ruled last week just before the long Thanksgiving weekend.

The parent is represented by the Wisconsin Institute for Law and Liberty and the Alliance Defending Freedom, both conservative law firms, which on Monday filed a notice of appeal of the decision.

The parent, only identified in the ruling as Jane Doe 4, is the last of 14 parents who initially sued the district in 2020 over a policy that’s part of a guidance document on student gender identity. The policy covered topics that include communication with the families of transgender and nonbinary students about their identities.

“Because she presents no evidence that she predicts, anticipates, or will actually suffer any individual harm, Jane Doe has no standing and her complaint must be dismissed,” wrote Circuit Judge Frank Remington. “Jane Doe’s claim must be dismissed because she fails to show why she anticipates that the district’s policies will cause even a trifling individual injury.”

Remington’s Nov. 23 decision does not directly address the merits of the policy but spends a great number of its 33 pages discussing what is considered legal standing, as expressed in recent state and federal court decisions.

Ignoring Doe’s lack of standing, Remington wrote, would be ignoring his own “limited and modest role in constitutional governance” and telling people he knows what’s best for them.

Remington wrote that while he doesn’t doubt her “genuine motive and keen interest in this case,” she is someone who was brought into the case to “invoke a court ruling upon” the matter. Many parents could believe, he wrote, that they or their children will be harmed by the policy, but they’re not part of the case.

“That is not to say that Jane Doe’s claims are not important — they just are equally important to every other member of the public who also disapproves of their local school board,” Remington wrote. “That our Constitution does not allow this court to take a side may leave the parties unsatisfied.” 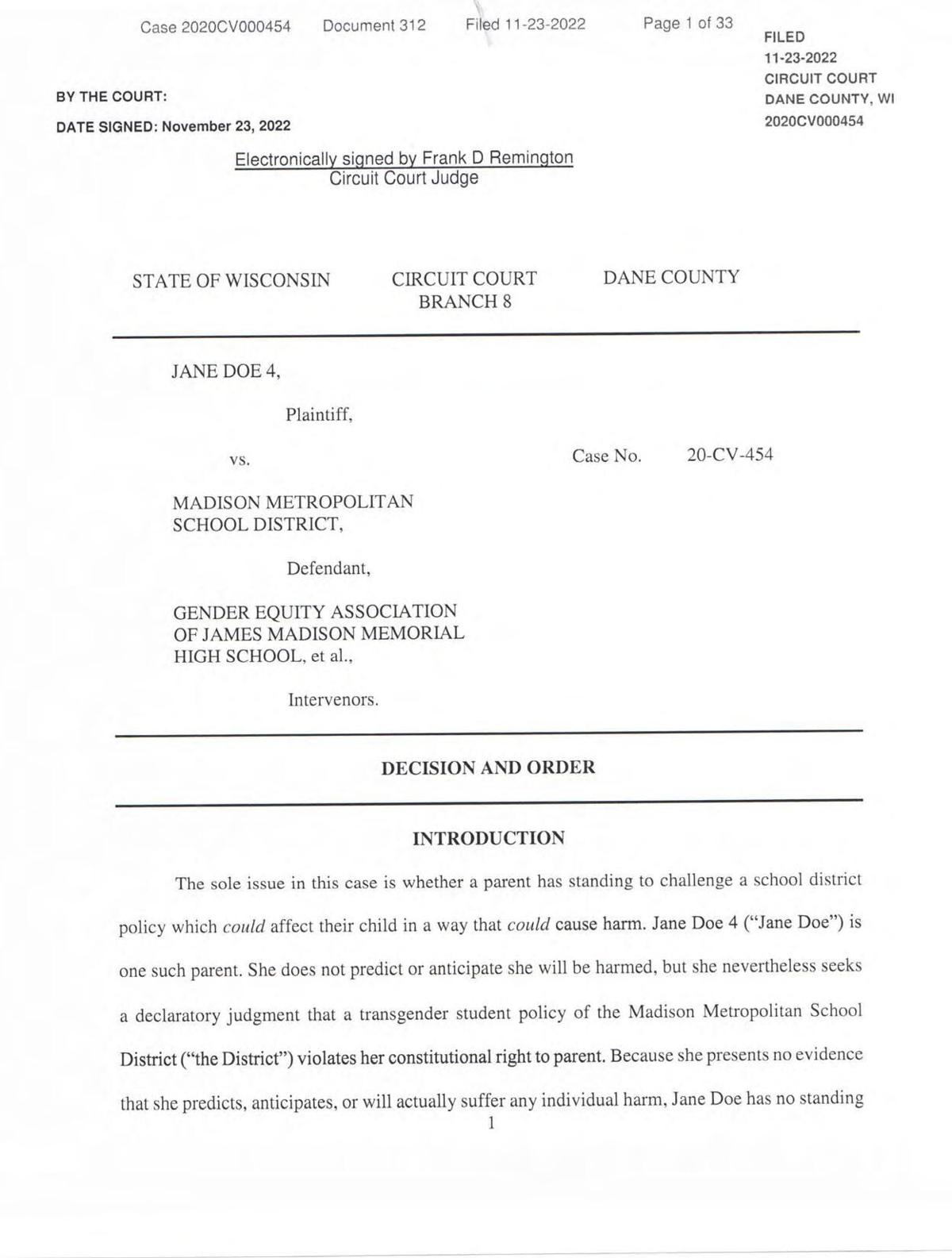 Asked about discussions concerning gender identity with her child, according to the deposition, she said, “I don’t think (the child’s) real interested in the topic,” and said she doesn’t believe her child has an interest in exploring the child’s own gender identity.

The issue of whether the 14 parents who initially sued in 2020 could do so anonymously went to the state Supreme Court, which ruled 4-3 in July that the parents’ identities must be disclosed to attorneys involved in the case, but not to the public. All but one parent has now dropped out of the case.

The American Civil Liberties Union and the ACLU of Wisconsin, which represented Madison school groups that intervened in the case to defend the district’s policy with pro bono help from Quarles & Brady, praised the ruling.

“Wednesday’s ruling recognizes that this case was never about the religious or parental rights of the parents recruited to be plaintiffs by WILL and ADF,” ACLU of Wisconsin legal director Larry Dupuis said in a statement.

“It was manufactured by those who play on fear and ignorance about gender identity and who would risk the safety of transgender students to advance their ideology. (The Madison School District’s) guidance protects the safety and emotional well-being of transgender and gender-expansive students by respecting their decision to not immediately share their use of different names or pronouns with parents who may be hostile toward the LGBTQ+ community.”

On Monday, WILL asked Remington for an order barring the district from implementing the policy while it appeals the ruling, citing its belief in the likelihood that it will find success on appeal and the probability that the policy “creates a risk of irreparable harm to (Doe) and her child.”

The Wisconsin Supreme Court on Friday declined parents' request to remain anonymous, and determined it was not appropriate for the court to rule on a temporary injunction to halt the district's gender identity policy.

In September 2020, a Dane County Circuit Court judge temporarily suspended portions of the Madison School District’s guidance on gender identity that a group of unnamed parents and a conservative law firm sued to overturn last winter.

Blocked is guidance that "allows or requires District staff to conceal information or to answer untruthfully ... ."

Judge: Names of suing parents must be given to school district lawyers

Though they won't be public, the names of parents suing the Madison School District over its guidance on transgender students must be given to opposing lawyers, a judge ruled.

The Wisconsin Institute for Law & Liberty sued the Madison School District Tuesday on behalf of 14 unnamed parents over a gender identity document they claim violates parental and religious freedom rights.

Remains of Wisconsin man who went missing in 1976 identified in Montana, authorities say

Montana authorities said Tuesday that human remains found in Carbon County about 18 years ago have been identified as those of a Wisconsin hitchhiker who left his home state to flee legal trouble.

A witness said the man who fired the gun had been knocked to the ground, and shot the victim after victim had helped him up.

A person was shot on the North Side on Wednesday night, Madison police reported.

A 10-year-old Milwaukee boy intentionally aimed a gun at his mother, then shot and killed her, because she would not buy him a virtual reality headset, prosecutors said.

A passenger window was shot out of a vehicle traveling on the Beltline on Wednesday afternoon, Madison police reported.

A man suffered minor injuries when he was hit by a slow-moving vehicle while crossing a Far East Side street on Wednesday, Madison police reported.

Skateboarder injured, ticketed after collision with vehicle on Near West Side, Madison police say

A skateboarder was injured and then ticketed after colliding with a vehicle on the Near West Side on Tuesday night, Madison police reported.