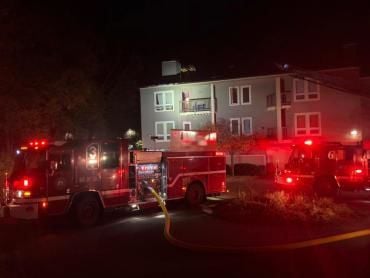 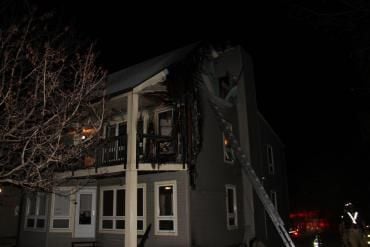 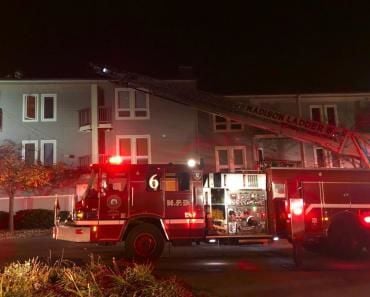 A fire did $100,000 damage at a multi-unit apartment building in the town of Madison on Tuesday night, authorities said.

The city of Madison Fire Department, which recently took over town fire calls, responded to a neighbor’s call to 911 reporting the fire at 10:42 p.m., arriving at the scene in the 100 block of Ski Court at 10:48 p.m., Fire Department spokesman Joel Kneifel said.

Firefighters found a large fire climbing up the back corner of the two-story building from a second-story balcony toward the attic. Firefighters attacked and extinguished the fire on the outside of the building, then moved to the interior to an upstairs unit and the attic, completely extinguishing the blaze at 11:10 p.m., Kneifel said.

The fire was just minutes from spreading through the attic and taking off the roof, Kneifel said.

Firefighters searched the building to ensure all residents had exited safely. No one was injured, but residents from two units of the building have been displaced, Kneifel said.

The cause of the fire was under investigation.

The results are in: See how Wisconsin voted in top state and local races

Results in Tuesday's vote for State Senate, State Assembly and school, county and municipal races and referendums (contested races only).

Voters approved a $317 million capital referendum to overhaul the high schools and a $33 million operating referendum by more than 50 percentage points.

A driver was cited after crashing into two bicyclists, injuring one in the town of Sun Prairie on Tuesday, authorities reported.

Madison police report 1 incident at a polling place on Tuesday

State investigators say Jason McDermott threatened to kill his grandmother unless she sold her condo cheaply to him.