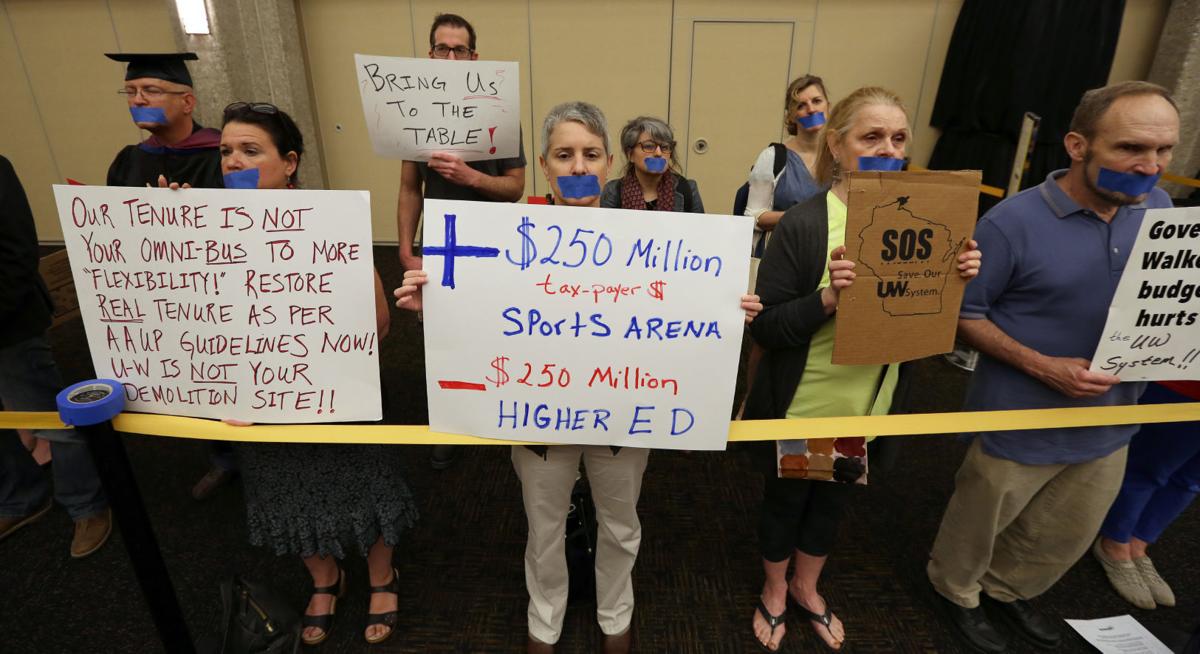 University of Wisconsin System educators and supporters, including Lorraine Malcoe (center), a professor at UW-Milwaukee, protest at a meeting of the System's Board of Regents, saying their voices aren't being included in a discussion over the future of tenure. A regents committee discussing tenure changes invited one of the protesters to address the board. 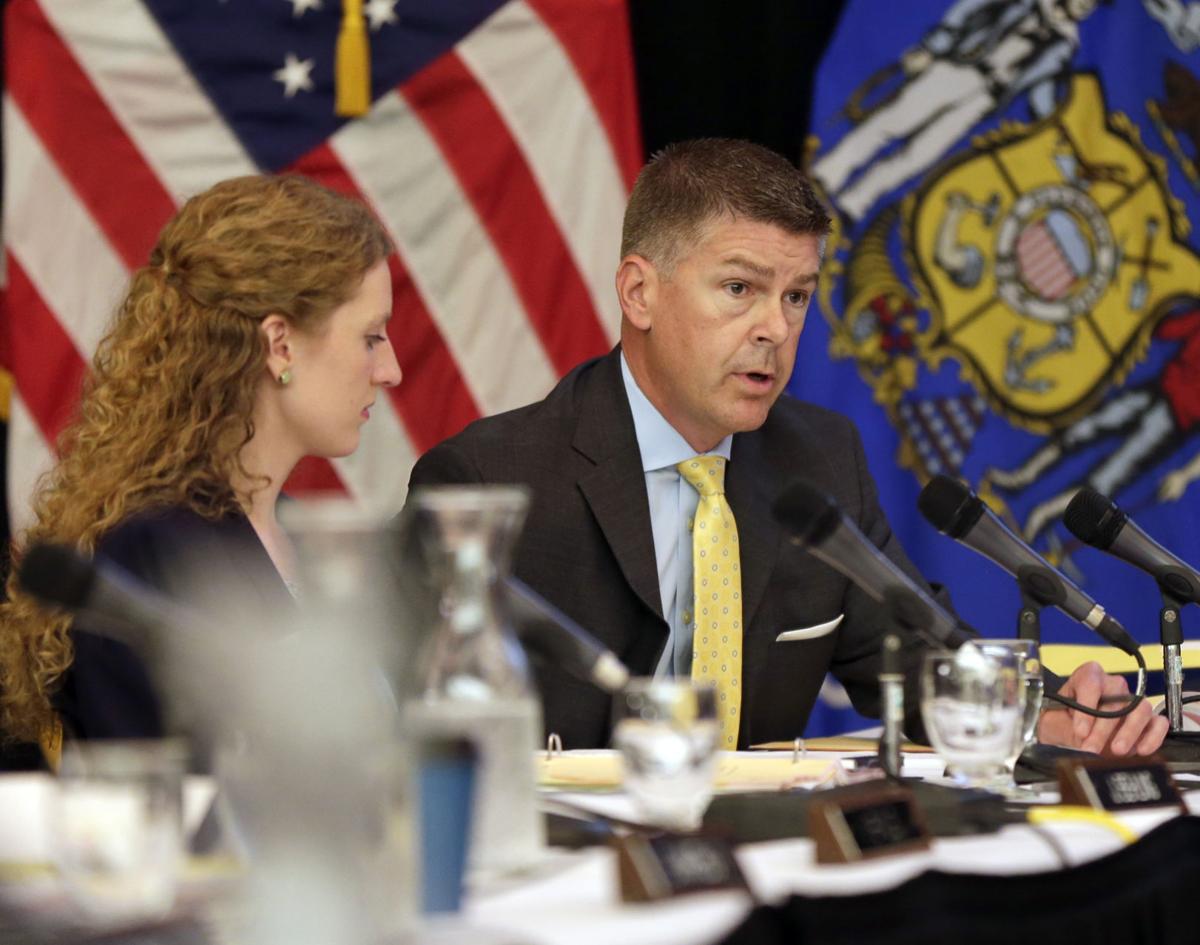 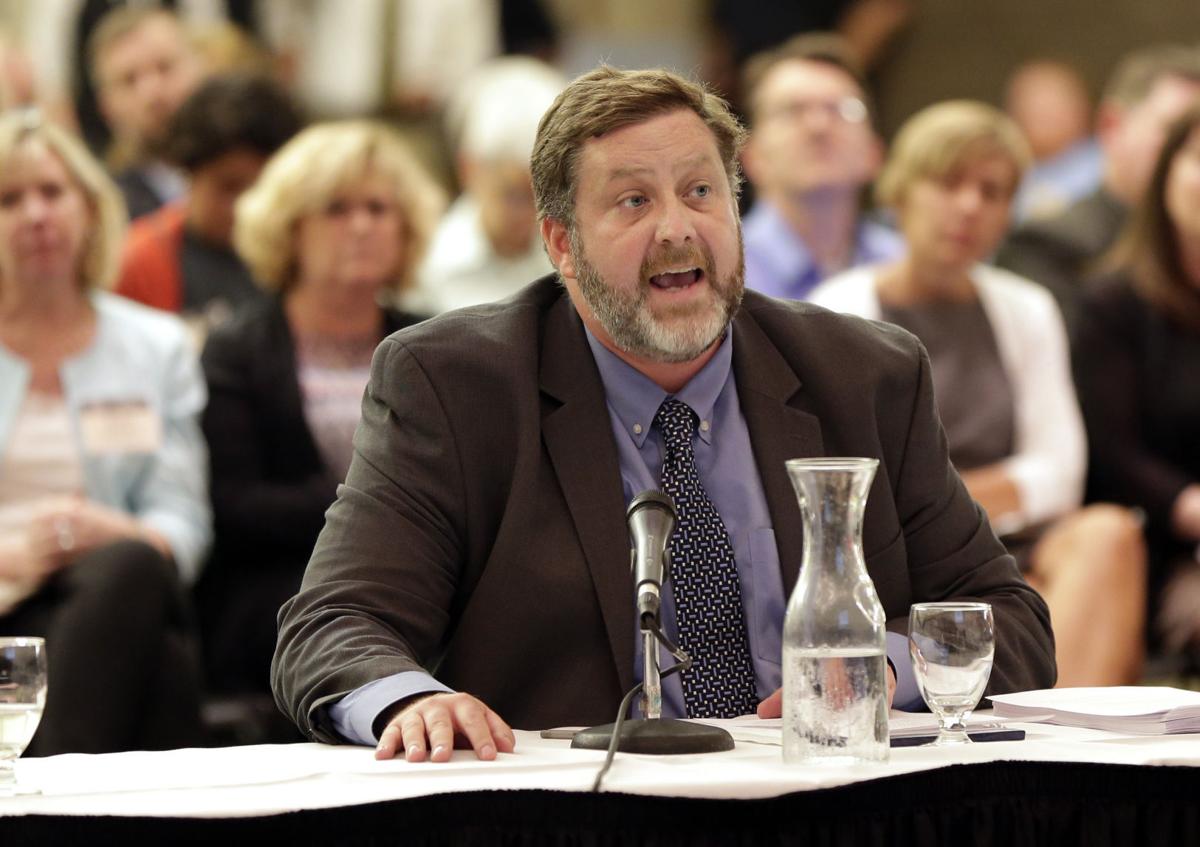 Professor David Vanness of the UW-Madison School of Medicine voices his concerns over legislatively proposed tenure changes at a Board of Regents meeting Thursday.

MILWAUKEE — Facing national attention and an onslaught of petitions and lobbying by University of Wisconsin professors, a Board of Regents committee on Thursday voted against formally opposing controversial changes to faculty tenure proposed by Republicans in the state Legislature, neglecting another motion asking lawmakers to strip the tenure changes from law.

The vote came after a sometimes contentious debate in a large UW-Milwaukee meeting room filled with faculty and others who oppose the tenure changes. Ultimately, a group of four Regents, all appointed by Gov. Scott Walker, voted against pressuring the Legislature to change course and instead directed a Regents task force on tenure to include a discussion of when and how tenured professors can be fired or laid off.

Two Regents appointed by former Democratic governor Jim Doyle, along with state schools superintendent Tony Evers, voted against it. An amendment by Evers to voice opposition to the tenure changes with state lawmakers failed.

Vanness started an online petition signed by 2,500 people in 49 states and 26 countries opposing changes approved by the state Legislature’s budget-writing committee. That committee voted to eliminate tenure protections in state law — Wisconsin is currently the only state in the country where it is in law — but went further, passing provisions that would make it easier for campus administrators and the Board of Regents to lay off or fire tenured professors.

A group of about 15 professors from throughout the University of Wisconsin System stood silently, their mouths taped shut, in a roped-off protest area at the far back of the room. They included four UW-Madison professors.

“We want to guarantee that tenure remains as a tenet and a pillar of higher education,” said Ray Cross, System president, at the start of the debate.

He later said that a tenure system that allows the arbitrary firing of tenured professors “is not tenure,” drawing sustained applause. But he also said that the changes proposed in state law may not be as dire as feared, suggesting that they’d still leave Regents flexibility in defining how and when tenured faculty can be let go.

“It will not be eroded,” he later told reporters.

The committee voted to adopt as Regents policy the tenure language that had been in state law. The move was not considered controversial because it was promised by Regents when tenure was first proposed to be removed from state law by Walker in February.

But the debate got tense when it turned to the rights of tenured faculty to due process before they’re removed — one piece of the Legislature’s proposed changes — and removing the current “financial necessity” requirement to give administrators more latitude to remove faculty legally, another piece of the proposed law.

Those provisions dominated debate and divided the committee about how they should be addressed.

Evers, who is state superintendent of K-12 schools, said the changes to tenure do nothing to improve life for students, faculty or the System’s shaky finances, made worse by Walker’s $300 million cut, since reduced to $250 million by the Legislature’s budget committee.

“We need to send a message to our faculty that we will be working as hard as we can to make sure this resolution does not become law,” Evers said, prompting raucous applause from the packed hall.

Regent Gerald Whitburn sponsored a replacement amendment which, instead of asking lawmakers to reconsider the tenure changes, would direct a Regents task force on tenure to take up the layoff measures.

Cross told the committee that the task force would be made up of faculty from throughout the System, whose voices would be included in crafting a new policy.

Evers said the effort would be completely pointless if and when the Legislature passes the layoff provisions into law.

The committee approved Whitburn’s amendment by a 4-3 vote. Whitburn was joined in voting yes by Regents Eve Hall, Drew Petersen and the student representative, Anicka Purath. Joining Evers in opposing it were Jose Vasquez and Mark Bradley. Edmund Manydeeds, the eighth and final member of the committee, was not present.

The vote was met by loud boos. The full 18-member board will vote on the measure on Friday.

Madison police say Officer Matt Kenny did not violate any departmental policies in the fatal shooting of 19-year-old Tony Robinson. The state'…

Regent Mark Bradley railed against the proposed changes, saying they were introduced without any consultation with university faculty and administrators.

Chris Rickert: Tenure-for-all not a compelling argument for tenure's importance

Faculty has not been mollified by assurances from University of Wisconsin System leaders that, even if removed from law, tenure would continue as System policy. They needn’t worry.

Chris Rickert: Protecting the freedom to do the work you want, where you want

Who wouldn't want to work at a place where it's really hard to get fired?

Legislators voted to remove tenure protections from law in the state budget.

University of Wisconsin System educators and supporters, including Lorraine Malcoe (center), a professor at UW-Milwaukee, protest at a meeting of the System's Board of Regents, saying their voices aren't being included in a discussion over the future of tenure. A regents committee discussing tenure changes invited one of the protesters to address the board.

Professor David Vanness of the UW-Madison School of Medicine voices his concerns over legislatively proposed tenure changes at a Board of Regents meeting Thursday.