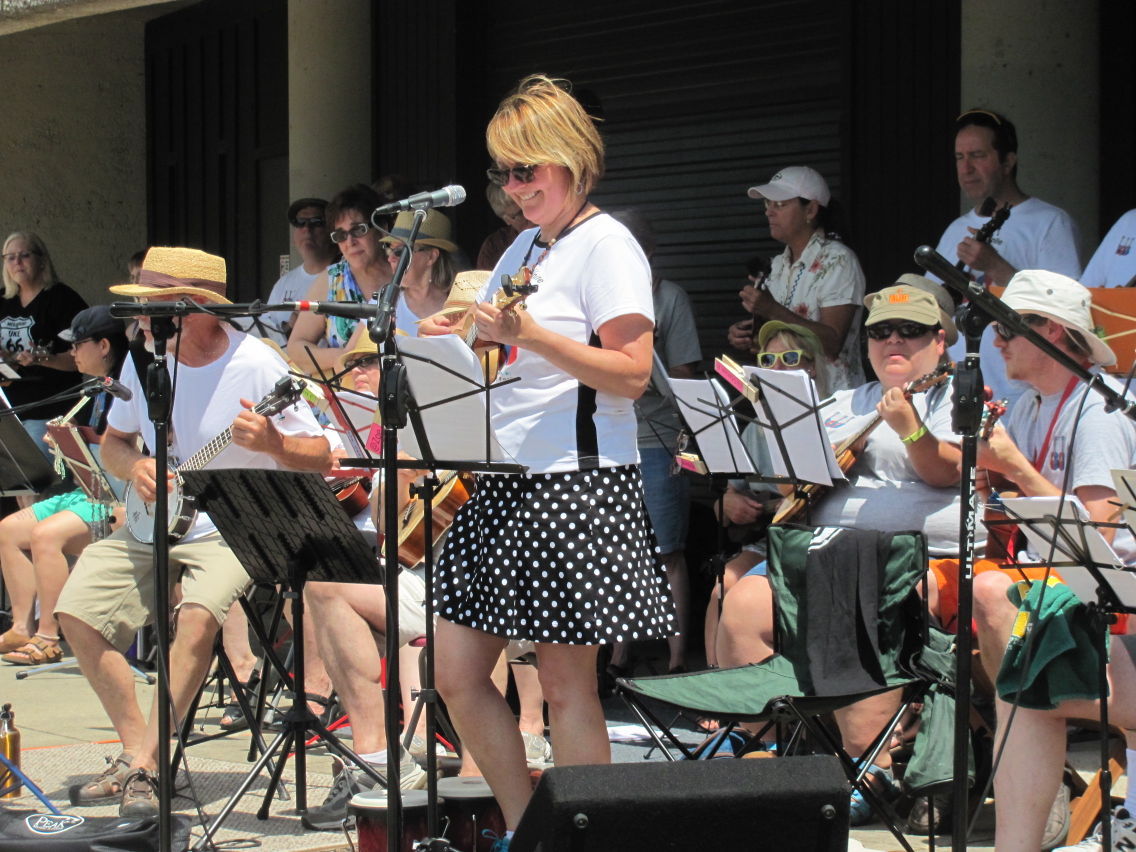 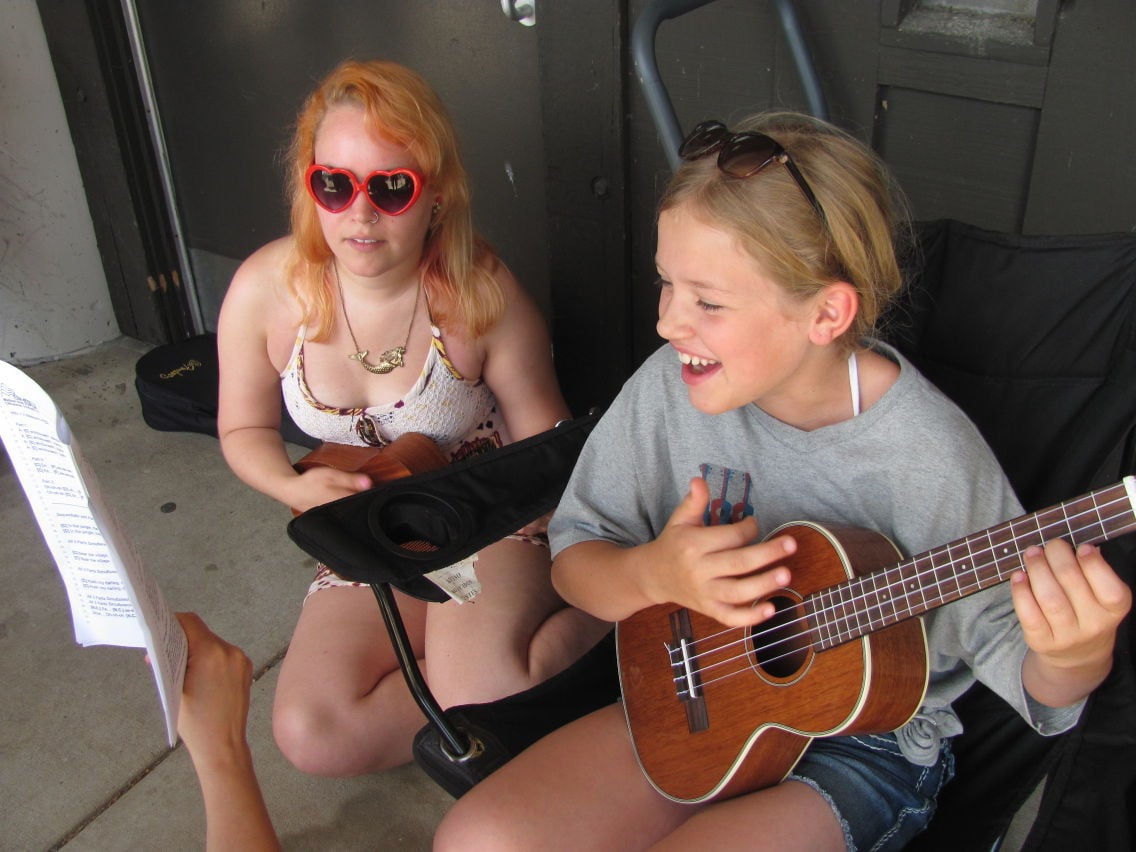 Thea Saunders Gillespie, 10, plays with her ukulele teacher Alana Wanke, 23, during "Ukuleles Unite." Her mother, Kisten Gillespie, not pictured, holds the sheet music. The two were participating in Make Music Madison on Sunday. 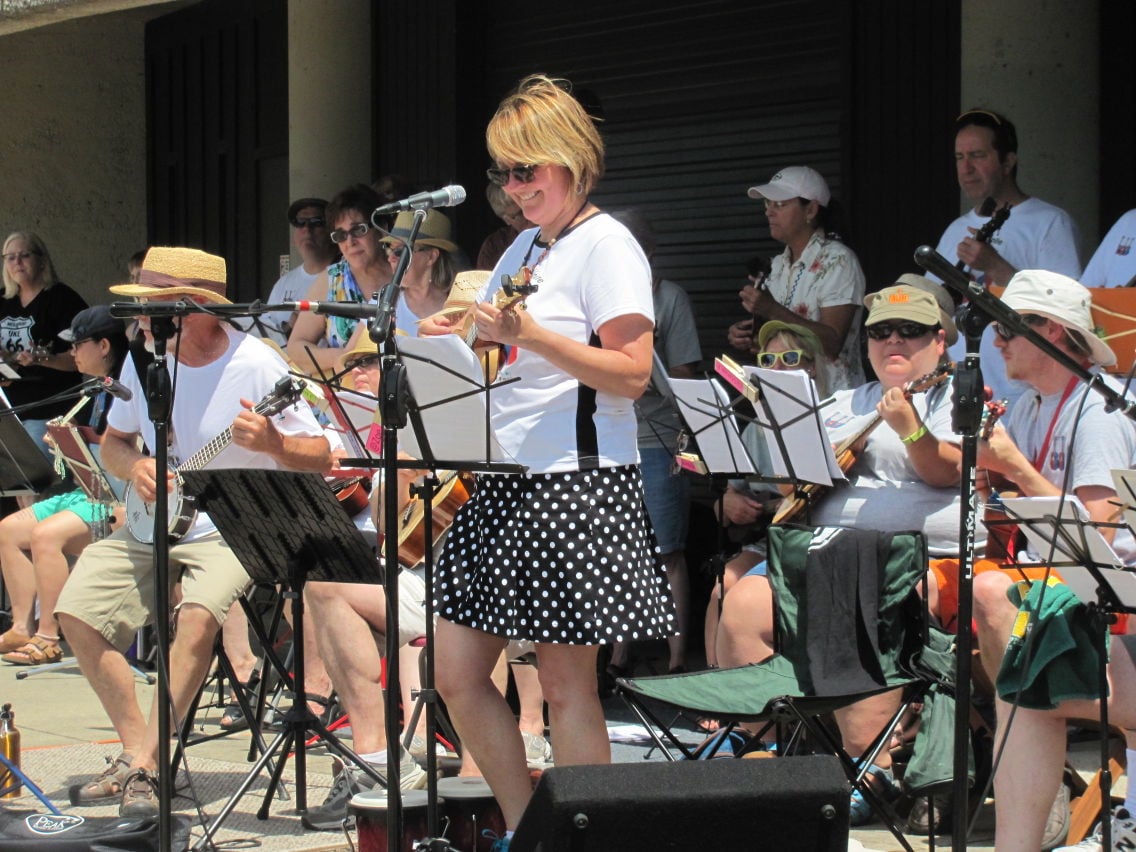 Big swaths of Madison were bathed in sunshine and music Sunday as Make Music Madison celebrated the longest day of the year.

For the third year in a row, the summer solstice in Madison saw a free day of concerts with about 325 individuals and groups giving more than 440 performances at 110 outdoor venues — big and small, high-profile and low-profile — across town.

“If it’s not replicated in every city in this nation, it should be — it’s wonderful,” said Karen Dexter, who drove 10 hours from Springfield, Missouri, to take part in “Ukuleles Unite,” a mass-ukulele sing-along, strum-along at James Madison Park that drew about 60 players of the easy-to-learn four-stringed instrument.

Marcia Standiford of Madison Area Ukulele Initiative led the group in songs like “Wagon Wheel,” “The Lion Sleeps Tonight” (“Wimoweh”), and “La Bamba” before about 150 people gathered in shady pockets around the park.

MAUI has a mailing list of more than 200 ukulele players, and 30 to 40 of them get together to play twice a month, Standiford said.

As for herself, Standiford said she started playing ukulele two years ago after finding the group online.

“There is a fellowship and sense of community with people who play music that is different from anything else,” she said. “We could be out here today on a beautiful day, but you add music and everything changes.”

The 600 block of South Few Street, which borders Orton Park, had a block party in conjunction with the free all-day music festival.

The Labuans, a band that describes itself as “pop punk” and “riot girl,” kicked things off on a front porch at 10:30 a.m., quickly leading to noise complaints and police visits.

Geoff Blake-Horst, who lives next door and plays in two bands, “Get Back Wisconsin” and “The Periodicals,” both of which played on the same porch later in the day, said police were satisfied when told of their permit to have music on the porch.

Make Music Madison, he said, “is a nice opportunity for friends to come out and listen to music and be a part of it, too.”

Last year, out of 115 communities in North and South America to hold similar events, Madison’s was the second-largest in terms of the number of concerts. The biggest in the Western Hemisphere was in New York City, according to the local event’s founder, Michael Rothschild.

“I just love music, and I saw this in New York and thought it was the perfect event for Madison,” Rothschild said. “Madison is so full of musicians and people who want to be part of events, and we’re such a participatory community and a communitarian sort of a place where people come out and you say, ‘Does anyone want to join us?’ and people just show up.”

Make Music Madison president Elizabeth Simcock said she was thrilled with how things went Sunday after stopping by some of the smaller stages and attending two “fabulous” events: a mass choir in front of the Edgewater hotel and a mass performance of Les Hoffman’s “It’s In Us” at James Madison Park.

“They had great people show up and a lot of excitement, good crowds,” she said. “And the weather’s gorgeous.”

Madison School Board members push for initiatives that would add $1.8 million to next year's school district budget while the city looks into …

For the third year in a row, Make Music Madison is offering music-lovers a free day of concerts Sunday.

Celebrate summer in Wisconsin with festivals, music, food and more

Celebrate summer around the state by catching one — or several — of the many seasonal events that make Wisconsin special.

Thea Saunders Gillespie, 10, plays with her ukulele teacher Alana Wanke, 23, during "Ukuleles Unite." Her mother, Kisten Gillespie, not pictured, holds the sheet music. The two were participating in Make Music Madison on Sunday.