After a 1,200-year-old canoe was brought to the surface of Lake Mendota in early November, it appeared that significant study of the ancient watercraft would have to wait at least two years since the canoe is undergoing a long-term preservation process in a specialized tank.

But in March, the canoe was briefly liberated from its bath of purified water and UV sterilization to undergo a series of high-tech 3D scans to create detailed renderings and give researchers a jump-start on their study of the rare archaeological find.

UW-Madison announced Tuesday that Lennon Rodgers, who directs the Grainger Engineering Design and Innovation Laboratory, conducted the scans at the invitation of Wisconsin State Archaeologist James Skibo and Scott Roller, a senior collections manager for the Wisconsin Historical Society. The canoe, being preserved and housed at the Wisconsin State Archive Preservation Facility on Madison’s Near East Side, was out of its tank for about a day in order for Rodgers, who oversees the College of Engineering’s makerspace, to do his work.

“They call Lake Mendota the most studied lake in the world,” said Skibo, referring to the work of the university’s Center for Limnology, which has a lakeside lab just west of Memorial Union. “I want to make this the most studied canoe in the world. We want to use every resource available to learn as much as we can about this vessel to tell a variety of stories.”

The canoe, located in 27 feet of water about 100 yards off the Shorewood Hills shoreline, was discovered in June by Tamara Thomsen, who was on a recreational dive but is also a maritime archaeologist with the Wisconsin Historical Society. Carbon-14 dating conducted from a sample of the 15-foot-long wooden canoe before it was brought to the surface revealed its age.

That means it was likely created by the effigy mound builders who inhabited the Madison area a millennium ago and were ancestors of today’s Ho-Chunk Nation. Seven net sinkers found in the boat suggest that it was a work canoe, used for a type of fishing previously only documented among cultures living along the shores of the Great Lakes.

The high-resolution scans conducted in late March by Rodgers captured marks and textures not apparent to the naked eye, and the software of the scanning devices was used to further analyze the surface by taking cross-sections and focusing on specific features, said Rodgers, who made 20 scans, each taking 15 to 20 minutes. Rodgers and makerspace staff have scanned a variety of objects over the years, including snowmobile engines, butterfly chrysalises, Formula 1 vehicle components, valuable artwork and an ancient wooden bowl.

Now they can add the oldest intact boat ever found in Wisconsin waters to the list of their scans.

“I really enjoy working in interdisciplinary settings,” Rodgers said in a statement announcing the scans. “I hung out with these archaeologists and historians and I could see they think differently from engineers. That’s why I’m attracted to these projects. They have a fresh, different approach to problem solving, and we as engineers can work with them in a complementary way.”

The canoe was in pure water and removed the day prior for cleaning of sediment and other particles, during which time Historical Society staff also changed the vat liner and added fresh water. The canoe remained out of the tank overnight but was wrapped in wet towels and poly sheeting to keep it saturated before doing the 3D scanning the next day, Roller said.

With the canoe on an examination table, Rodgers first used his iPhone to create a lower resolution color scan before using a high-end 3D scanner that doesn’t capture color but has a finer resolution.

The information from the scan was then used to reconstruct the 3D shape of the surface in real time on a computer screen.

Once back in his own lab on the UW-Madison campus, Rodgers used sophisticated software to stitch the scans together, creating a digital 3D model of the canoe that can be spun around, flipped upside down, zoomed in on and manipulated in many ways.

“Now we have a really good three-dimensional scan of this object,” said Rodgers, who was found by Skibo after a Google search. “You can see all the way down to the tool marks.”

Once the preservation process is completed, the canoe will likely go on display. But Skibo may use the scans to create a full-size replica in which visitors could sit, once the new Wisconsin History Center opens on Capitol Square at the top of State Street. Skibo is also considering scans of other fragile archived artifacts and wants to use specially equipped drones to scan forests and fields in Wisconsin to uncover hidden effigy mounds and other historic sites.

“This canoe is a very complex shape, and it was created by hand,” Skibo said. “So there was a person, an engineer, that built this 1,200 years ago. He or she was probably one of the original early ‘makers.’ To me, documenting that work is a great use for 3D scanning.”

The vessel was found in June in 27 feet of water and is the oldest intact boat ever discovered in Wisconsin waters.

Saturday's events at the National Historic Landmark near Lake Mills will include five experts on the 172-acre property known for its large, flat-topped pyramidal mounds that were surrounded by a stockade wall along the Crawfish River.

"When you're building handmade wooden boats, that particular customer is very knowledgeable and aware of the quality they're getting."

The 188,000-square-foot, $46.7 million building has been constructed to safely store and preserve over 420,000 historical items and millions of documents.

Watch now: Making the invitation of the Lower Wisconsin Riverway a bit safer

A free life jacket program continues to grow, while a new text alert system has been launched for the 92-mile stretch of wilderness.

Acclaimed Lake Mills author Margot Peters had a life filled with biographies and novels, was diagnosed with breast cancer in 2020 and died Saturday. She was 89.

Watch now: Making a difference in Ukraine via Wisconsin's Northwoods

Disturbed by what he saw unfolding in Ukraine, Shane Wyzlic of Saxon has made two trips to assist those afflicted by the Russian attack. 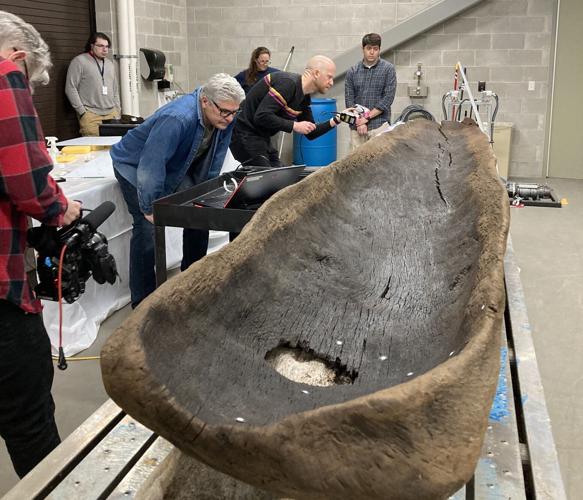 This 1,200-year-old dugout canoe found in June and pulled from Lake Mendota in early November was temporarily removed in March from a preservation tank so it could be scanned to make 3-D images of the historic watercraft. 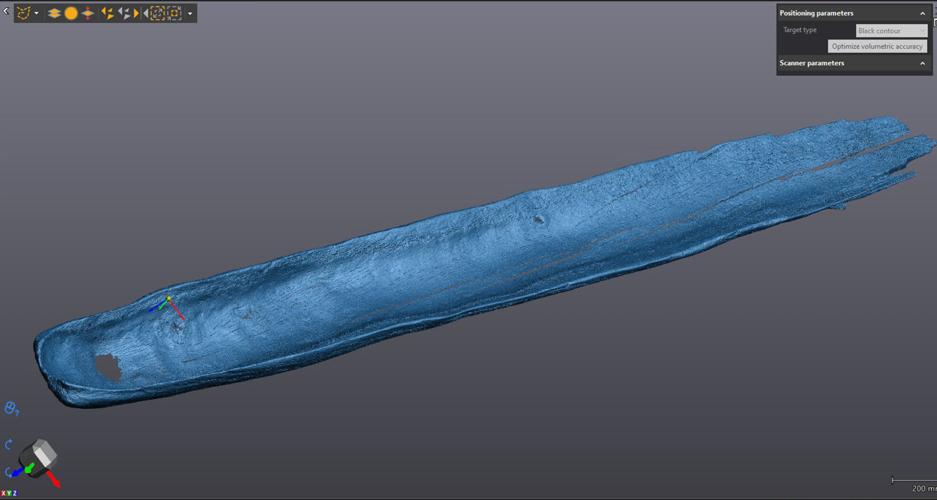 A series of scans on the canoe includes a hole, at left, in one end of the boat. The scans show more details than can be seen with the naked eye. 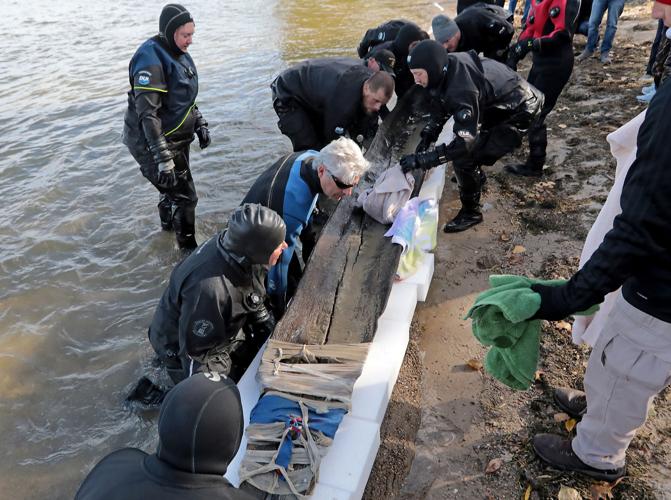 The 1,200-year-old dugout canoe was raised from Lake Mendota in early November by the Wisconsin Historical Society. The canoe was discovered in June during a recreational dive and is the oldest intact boat ever recovered from Wisconsin waters. The canoe is undergoing preservation efforts over the next two years before it could be displayed in a museum. 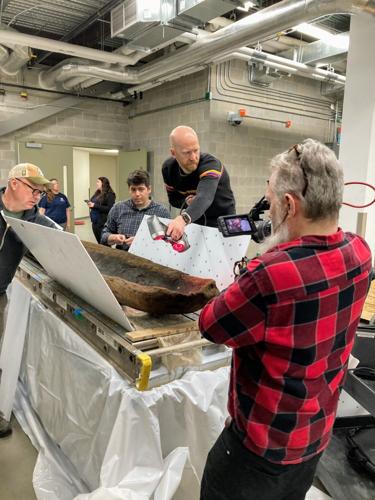 Lennon Rodgers, who directs the Grainger Engineering Design and Innovation Laboratory at UW–Madison, uses a high-tech device to scan a 1,200-year-old dugout canoe that was pulled from Lake Mendota in early November. 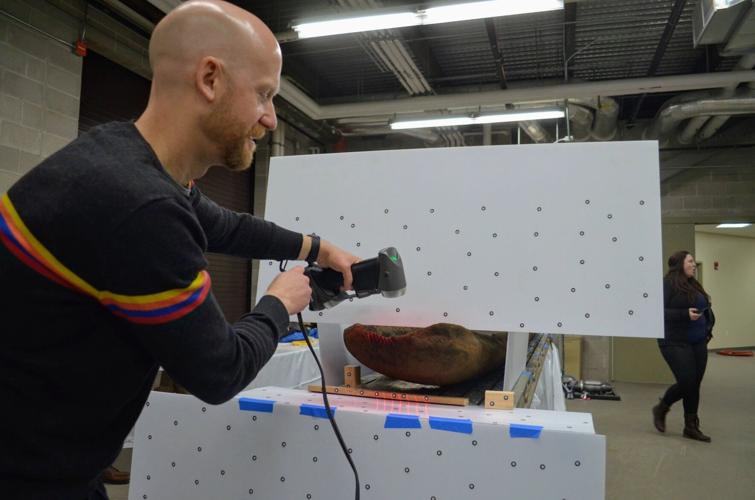 Lennon Rodgers, who directs the Grainger Engineering Design and Innovation Laboratory at UW-Madison, scans the dugout canoe to make 3-D images of the boat found in Lake Mendota. 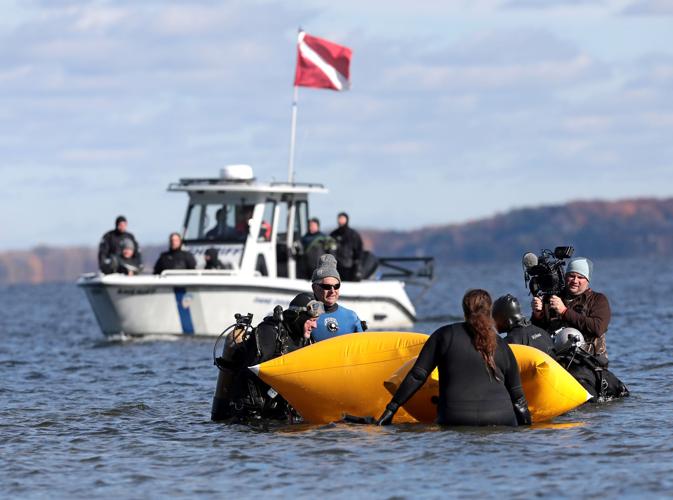 A dugout canoe crafted in A.D. 800 was towed in early November for most of its 1-mile trip to shore but guided by divers in shallow water for the final 100 yards or so to Spring Harbor Beach.