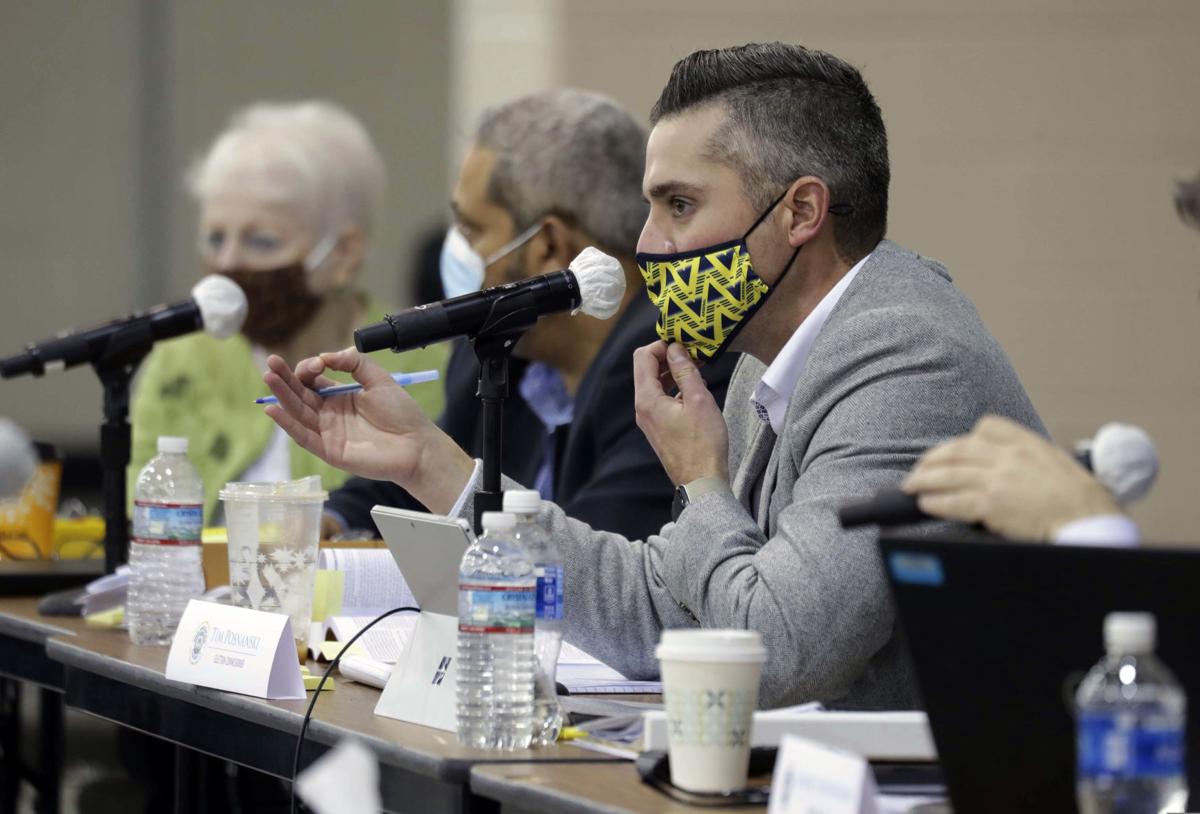 Milwaukee county election officials address concerns with the counting process in the commission review area Saturday at the presidential election recount at the Wisconsin Center in Milwaukee. 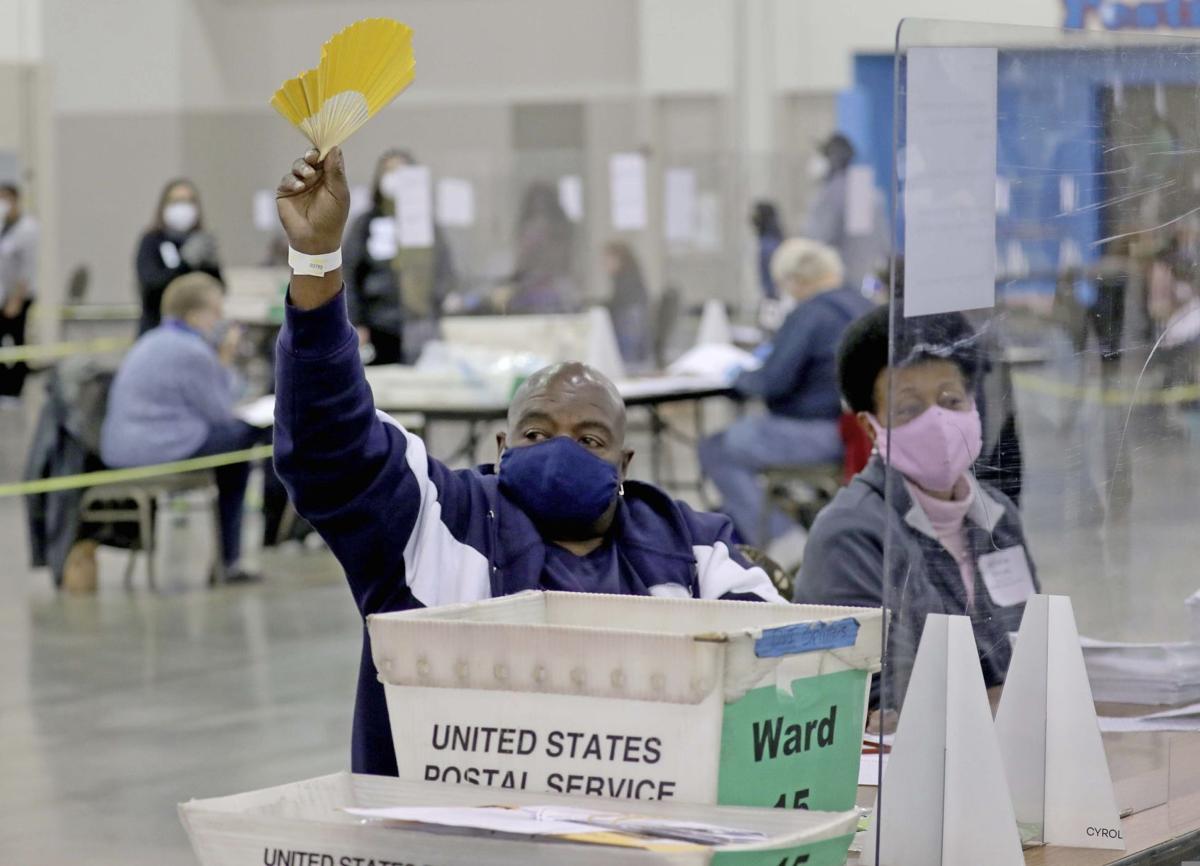 A election worker requests help while recounting ballots at the Wisconsin Center in Milwaukee. 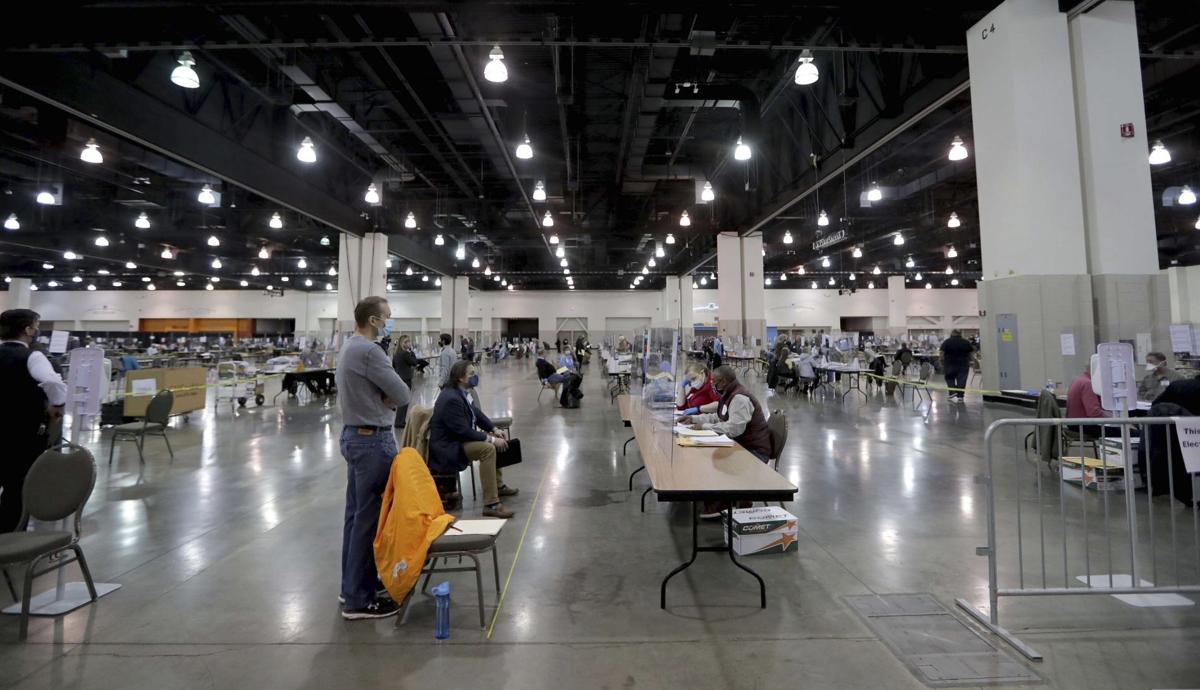 Election workers recount presidential ballots Saturday at the Wisconsin Center in Milwaukee. Election officials in Wisconsin’s largest county accused observers for President Donald Trump on Saturday of seeking to obstruct a recount of the presidential results, in some instances by objecting to every ballot tabulators pulled to count.

MILWAUKEE — Wisconsin recount observer Ardis Cerny stretched her neck as far as she could toward a Plexiglas divider separating her from two vote counters, eagle-eyeing them as they scrutinized ballot papers one by one.

When one tabulator told the ardent supporter of President Donald Trump she was leaning too far over a yellow line on a Milwaukee conference-hall floor meant to keep observers 3 feet away, Cerny bristled.

“I know you don’t want us to see the ballots,” she said. “You think we’ll find something.”

Cerny is part of a large contingent of pro-Trump observers participating in a recount the president requested and paid $3 million for in the state’s two biggest and most liberal counties, Milwaukee and Dane, in a long-shot bid to erase Democrat Joe Biden’s more than 20,000-vote lead after the initial count.

With no precedent to erase such a large margin, it’s widely expected that Trump’s eventual plan in Wisconsin is litigation over thousands of absentee ballots that he argues were improperly cast.

But that doesn’t mean his recount observers aren’t trying.

The atmosphere inside the convention hall where Milwaukee County’s recount is taking place has turned acrimonious and chaotic at times. Lawyers for the Trump and Biden camps constantly walk the floor monitoring the hundreds of tables over a space the size of several football fields.

The commissioners occasionally walked up to recount tables themselves to investigate alleged rule violations. When too many people gathered around one table Friday, violating social distancing rules, Republican commission member Rick Baas suddenly shouted, “I’ve had it! Clear this floor now!”

On another occasion, he rebuked some observers for being disruptive and called on them to behave with civility: “We will not be like … other states.”

At least some didn’t heed that appeal.

One Trump observer was escorted from the building by sheriff’s deputies Saturday after pushing an election official who had lifted her coat from an observer chair. Another was removed Friday for not wearing a face mask properly as coronavirus infection rates have soared in the state.

“You have to stand back and sit down,” one election official, flanked by deputies, told another Trump observer. “If you don’t, you’ll be escorted out.” After arguing for a moment, the observer sat down.

The county’s election commissioners — two Democrats and one Republican — have been in almost perpetual session to address a stream of Trump challenges that county clerk George Christenson said was slowing the recount to a crawl and putting the process far behind schedule. On Saturday, election officials accused Trump representatives of flouting rules to obstruct and delay the recount, noting some of their observers were objecting to every ballot at a particular table. Challenges were being made over absentee ballots that were folded — a necessary step for voters to put them in envelopes.

Another Trump challenge sought to disqualify mail-in ballots submitted in envelopes with official stickers that had become unstuck.

“Some of the stuff we’re getting into is ridiculous,” an increasingly exasperated Tim Posnanski, the commission chairman, said Saturday.

When one Trump representative sounded dismissive about advice that Milwaukee County’s corporation counsel, Margaret Daun, offered commissioners, she admonished him: “Please don’t talk down to me, sir.”

While the recount itself almost certainly won’t change the result, Trump’s campaign appears to be intent on getting as many challenges on the record as possible so they can eventually ask a judge to toss whole categories of ballots. Trump lost to Biden in Milwaukee County, the state’s most populous county that includes a large Black population, by more than a 2-to-1 margin. The focus of disputes are tens of thousands of absentee ballots.

By law, the recount must be finished by Dec. 1. But by Saturday evening, few of the hundreds of Milwaukee tabulators had gotten around to actually counting votes, the county clerk said. They’d spent most of the two days since the process began Friday sorting ballot papers, including mail-in ballot envelopes and applications.

Joe Voiland, speaking to commission members Saturday on behalf of the Trump campaign, denied his side was acting in bad faith.

“I want to get to the point of dialing everything down … and not yelling at each other,” Voiland said.

Elections officials asked reporters not to speak to tabulators or observers as they worked. But Cerny was singled out to commissioners by name as an example of supporters posing as independents to get around rules limiting observers to one per table from each campaign. She stood, gave her name and asked to speak to commissioners but was told she couldn’t.

She wore a name tag on her blouse that identified her as an “independent observer,” but when asked by a reporter if she was there to support Trump, she didn’t hesitate. “Yes,” she said. She declined to comment further.

A Biden observer sitting next to Cerny earlier told her to lean back from the yellow line intended to separate observers from tabulators, then softened her tone.

“We want every vote counted,” she told Cerny, “just like you do.”

First snowstorm of season on the way for southern Wisconsin. See how much will fall and when

Accumulating wet, dense snow will make for a messy commute for southern Wisconsin on Tuesday morning, according to forecasters.

Apparently undeterred by blizzards and bitter cold in the winter here, Money.com has ranked Madison No. 1 in its annual “Best Places to Retire” rankings for 2020.

Fauci: US readies for rollout of COVID-19 vaccine

Fauci: US readies for rollout of COVID-19 vaccine

Milwaukee county election officials address concerns with the counting process in the commission review area Saturday at the presidential election recount at the Wisconsin Center in Milwaukee.

A election worker requests help while recounting ballots at the Wisconsin Center in Milwaukee.

Election workers recount presidential ballots Saturday at the Wisconsin Center in Milwaukee. Election officials in Wisconsin’s largest county accused observers for President Donald Trump on Saturday of seeking to obstruct a recount of the presidential results, in some instances by objecting to every ballot tabulators pulled to count.