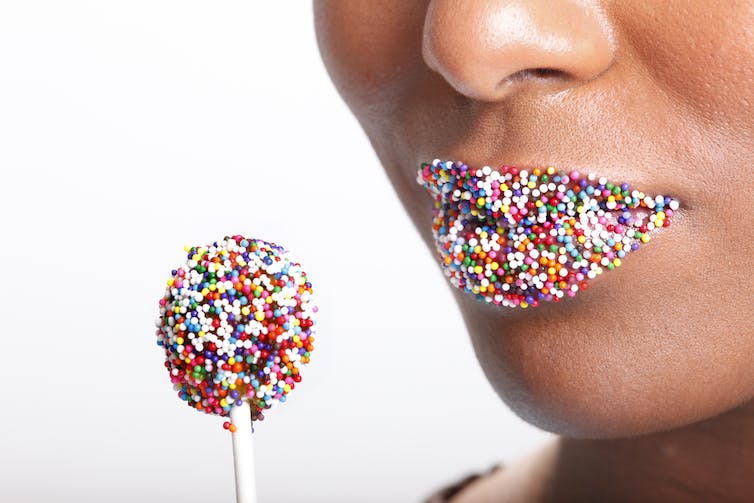 Anyone who knows me also knows that I have a huge sweet tooth. I always have. My friend and fellow graduate student Andrew is equally afflicted, and living in Hershey, Pennsylvania – the “Chocolate Capital of the World” – doesn’t help either of us.

But Andrew is braver than I am. He gave up sweets for Lent. I can’t say that I’m following in his footsteps, but if you are abstaining from sweets for Lent this year, here’s what you can expect over the next 40 days.

In neuroscience, food is something we call a “natural reward.” In order for us to survive as a species, things like eating, having sex and nurturing others must be pleasurable to the brain so that these behaviours are reinforced and repeated. 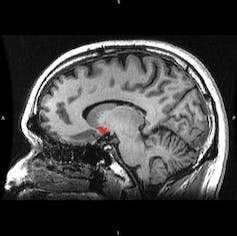 The nucleus accumbens. Geoff B Hall

Evolution has resulted in the mesolimbic pathway, a brain system that deciphers these natural rewards for us. When we do something pleasurable, a bundle of neurons called the ventral tegmental area uses the neurotransmitter dopamine to signal to a part of the brain called the nucleus accumbens. The connection between the nucleus accumbens and our prefrontal cortex dictates our motor movement, such as deciding whether or not to taking another bite of that delicious chocolate cake. The prefrontal cortex also activates hormones that tell our body: “Hey, this cake is really good. And I’m going to remember that for the future.”

Not all foods are equally rewarding, of course. Most of us prefer sweets over sour and bitter foods because, evolutionarily, our mesolimbic pathway reinforces that sweet things provide a healthy source of carbohydrates for our bodies. When our ancestors went scavenging for berries, for example, sour meant “not yet ripe,” while bitter meant “alert – poison!” 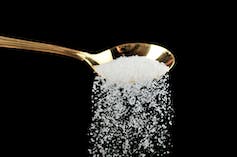 21 spoonfuls to go. Spoonful of sugar by Shutterstock

Fruit is one thing, but modern diets have taken on a life of their own. A decade ago, it was estimated that the average American consumed 22 teaspoons of added sugar per day, amounting to an extra 350 calories; it may well have risen since then. A few months ago, one expert suggested that the average Briton consumes 238 teaspoons of sugar each week.

Today, with convenience more important than ever in our food selections, it’s almost impossible to come across processed and prepared foods that don’t have added sugars for flavour, preservation, or both.

These added sugars are sneaky – and unbeknown to many of us, we’ve become hooked. In ways that drugs of abuse – such as nicotine, cocaine and heroin – hijack the brain’s reward pathway and make users dependent, increasing neuro-chemical and behavioural evidence suggests that sugar is addictive in the same way, too.

“The first few days are a little rough,” Andrew told me about his sugar-free adventure last year. “It almost feels like you’re detoxing from drugs. I found myself eating a lot of carbs to compensate for the lack of sugar.”

There are four major components of addiction: bingeing, withdrawal, craving, and cross-sensitisation (the notion that one addictive substance predisposes someone to becoming addicted to another). All of these components have been observed in animal models of addiction – for sugar, as well as drugs of abuse.

A typical experiment goes like this: rats are deprived of food for 12 hours each day, then given 12 hours of access to a sugary solution and regular chow. After a month of following this daily pattern, rats display behaviours similar to those on drugs of abuse. They’ll binge on the sugar solution in a short period of time, much more than their regular food. They also show signs of anxiety and depression during the food deprivation period. Many sugar-treated rats who are later exposed to drugs, such as cocaine and opiates, demonstrate dependent behaviours towards the drugs compared to rats who did not consume sugar beforehand.

Like drugs, sugar spikes dopamine release in the nucleus accumbens. Over the long term, regular sugar consumption actually changes the gene expression and availability of dopamine receptors in both the midbrain and frontal cortex. Specifically, sugar increases the concentration of a type of excitatory receptor called D1, but decreases another receptor type called D2, which is inhibitory. Regular sugar consumption also inhibits the action of the dopamine transporter, a protein which pumps dopamine out of the synapse and back into the neuron after firing.

In short, this means that repeated access to sugar over time leads to prolonged dopamine signalling, greater excitation of the brain’s reward pathways and a need for even more sugar to activate all of the midbrain dopamine receptors like before. The brain becomes tolerant to sugar – and more is needed to attain the same “sugar high.”

Although these studies were conducted in rodents, it’s not far-fetched to say that the same primitive processes are occurring in the human brain, too. “The cravings never stopped, [but that was] probably psychological,” Andrew told me. “But it got easier after the first week or so.” 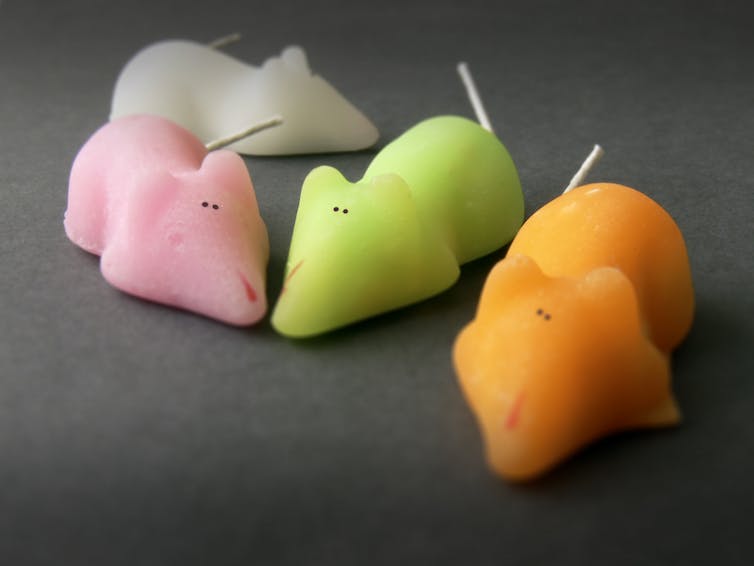 In a 2002 study by Carlo Colantuoni and colleagues of Princeton University, rats who had undergone a typical sugar dependence protocol then underwent “sugar withdrawal.” This was facilitated by either food deprivation or treatment with naloxone, a drug used for treating opiate addiction which binds to receptors in the brain’s reward system. Both withdrawal methods led to physical problems, including teeth chattering, paw tremors, and head shaking. Naloxone treatment also appeared to make the rats more anxious, as they spent less time on an elevated apparatus that lacked walls on either side.

A new study published by Victor Mangabeira and colleagues in Physiology & Behavior reports that sugar withdrawal is also linked to impulsive behaviour. Initially, rats were trained to receive water by pushing a lever. After training, the animals returned to their home cages and had access to a sugar solution and water, or just water alone. After 30 days, when rats were again given the opportunity to press a lever for water, those who had become dependent on sugar pressed the lever significantly more times than control animals, suggesting impulsive behaviour.

These are extreme experiments, of course. We humans aren’t depriving ourselves of food for 12 hours and then allowing ourselves to binge on soda and doughnuts at the end of the day. But these rodent studies certainly give us insight into the neuro-chemical underpinnings of sugar dependence, withdrawal, and behaviour.

Through decades of diet programmes and best-selling books, we’ve toyed with the notion of “sugar addiction” for a long time. There are accounts of those in “sugar withdrawal” describing food cravings, which can trigger relapse and impulsive eating. There are also countless articles and books about the boundless energy and new-found happiness in those who have sworn off sugar for good. But despite the ubiquity of sugar in our diets, the notion of sugar addiction is still a rather taboo topic.

Are you still motivated to give up sugar for Lent? You might wonder how long it will take until you’re free of cravings and side-effects, but there’s no answer – everyone is different and no human studies have been done on this. But after 40 days, it’s clear that Andrew had overcome the worst, likely even reversing some of his altered dopamine signalling. “I remember eating my first sweet and thinking it was too sweet,” he said. “I had to rebuild my tolerance.”

And as regulars of a local bakery in Hershey – I can assure you, readers, that he has done just that.

Which subscription boxes are worth your time and money

These hottest plant trends are sprouting up online

Whether neon, architectural or gothic black, the latest trends in houseplants are a direct result of the pandemic. Here's what to expect this year.

Fauci: 'Possible' Americans will be wearing masks in 2022 to protect against Covid-19

Dr. Anthony Fauci said Sunday that it's "possible" Americans will still need to wear masks in 2022 to protect against the coronavirus, even as the US may reach "a significant degree of normality" by the end of this year.

If she'd waited to get vaccinated until it was her "tier's" turn, Isabela Medina wouldn't have gotten the Covid-19 vaccine until late summer.

General Motors' Bolt electric utility vehicle is due to go into production in late spring of 2022 and go on sale in early summer.

People can say all sorts of strange things in their sleep, but a new study suggests that someone in the middle of a vivid dream can understand questions — and even answer them.

The cities where homes are selling the fastest

How to pick the best card games for your kids

Card games can help boost your children’s critical thinking skills while entertaining them at the same time. Here's a guide to finding the best ones.

Food storage containers can prolong the life of leftovers, keep pests out of dry food, and help you organize your refrigerator, but a bad container lets in air and moisture, and leaves food spoiled. Here are 4 great containers to keep your kitchen organized.