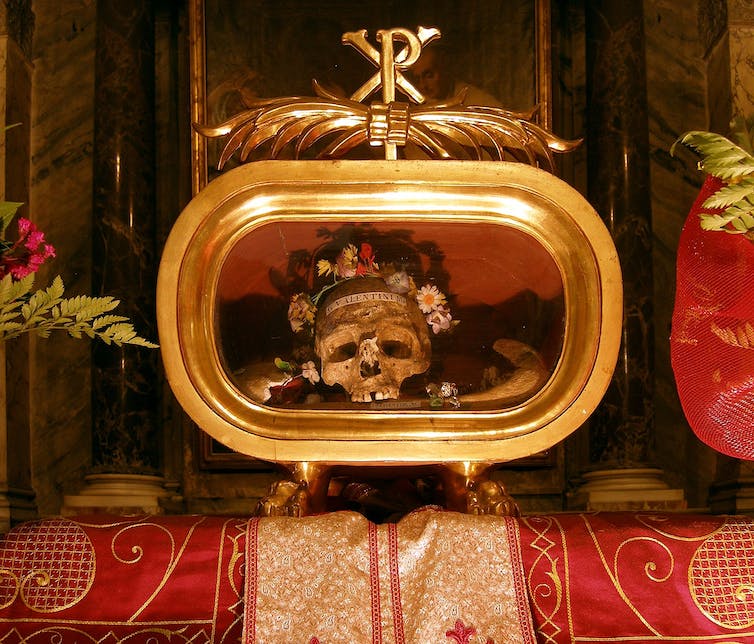 Relics of St. Valentine of Terni at the basilica of Saint Mary in Cosmedin. Dnalor 01 (Own work) , CC BY-SA Lisa Bitel, USC Dornsife College of Letters, Arts and Sciences

On Feb. 14, sweethearts of all ages will exchange cards, flowers, candy, and more lavish gifts in the name of St. Valentine. But as a historian of Christianity, I can tell you that at the root of our modern holiday is a beautiful fiction. St. Valentine was no lover or patron of love.

Valentine’s Day, in fact, originated as a liturgical feast to celebrate the decapitation of a third-century Christian martyr, or perhaps two. So, how did we get from beheading to betrothing on Valentine’s Day?

Ancient sources reveal that there were several St. Valentines who died on Feb. 14. Two of them were executed during the reign of Roman Emperor Claudius Gothicus in 269-270 A.D., at a time when persecution of Christians was common.

How do we know this? Because, an order of Belgian monks spent three centuries collecting evidence for the lives of saints from manuscript archives around the known world.

They were called Bollandists after Jean Bolland, a Jesuit scholar who began publishing the massive 68-folio volumes of “Acta Sanctorum,” or “Lives of the Saints,” beginning in 1643.

Since then, successive generations of monks continued the work until the last volume was published in 1940. The Brothers dug up every scrap of information about every saint on the liturgical calendar and printed the texts arranged according to the saint’s feast day.

The volume encompassing Feb. 14 contains the stories of a handful of “Valentini,” including the earliest three of whom died in the third century. 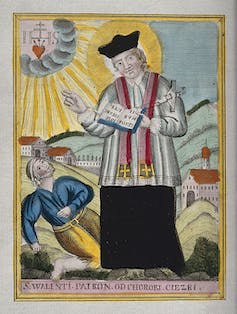 The earliest Valentinus is said to have died in Africa, along with 24 soldiers. Unfortunately, even the Bollandists could not find any more information about him. As the monks knew, sometimes all that the saints left behind was a name and day of death.

We know only a little more about the other two Valentines.

According to a late medieval legend reprinted in the “Acta,” which was accompanied by Bollandist critique about its historical value, a Roman priest named Valentinus was arrested during the reign of Emperor Gothicus and put into the custody of an aristocrat named Asterius.

As the story goes, Asterius made the mistake of letting the preacher talk. Father Valentinus went on and on about Christ leading pagans out of the shadow of darkness and into the light of truth and salvation. Asterius made a bargain with Valentinus: If the Christian could cure Asterius’s foster-daughter of blindness, he would convert. Valentinus put his hands over the girl’s eyes and chanted:

“Lord Jesus Christ, en-lighten your handmaid, because you are God, the True Light.”

Easy as that. The child could see, according to the medieval legend. Asterius and his whole family were baptized. Unfortunately, when Emperor Gothicus heard the news, he ordered them all to be executed. But Valentinus was the only one to be beheaded. A pious widow, though, made off with his body and had it buried at the site of his martyrdom on the Via Flaminia, the ancient highway stretching from Rome to present-day Rimini. Later, a chapel was built over the saint’s remains.

St. Valentine was not a romantic

The third third-century Valentinus was a bishop of Terni in the province of Umbria, Italy. 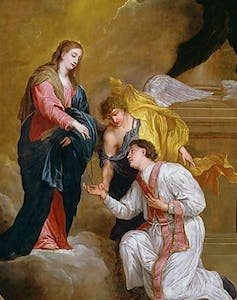 According to his equally dodgy legend, Terni’s bishop got into a situation like the other Valentinus by debating a potential convert and afterward healing his son. The rest of story is quite similar as well: He too, was beheaded on the orders of Emperor Gothicus and his body buried along the Via Flaminia.

It is likely, as the Bollandists suggested, that there weren’t actually two decapitated Valentines, but that two different versions of one saint’s legend appeared in both Rome and Terni.

Nonetheless, African, Roman or Umbrian, none of the Valentines seems to have been a romantic.

Indeed, medieval legends, repeated in modern media, had St. Valentine performing Christian marriage rituals or passing notes between Christian lovers jailed by Gothicus. Still other stories romantically involved him with the blind girl whom he allegedly healed. Yet none of these medieval tales had any basis in third-century history, as the Bollandists pointed out. 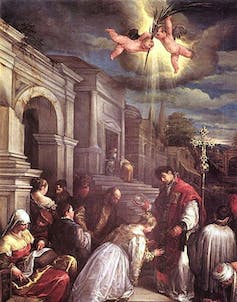 In any case, historical veracity did not count for much with medieval Christians. What they cared about were stories of miracles and martyrdoms, and the physical remains or relics of the saint. To be sure, many different churches and monasteries around medieval Europe claimed to have bits of a St. Valentinus’ skull in their treasuries.

Santa Maria in Cosmedin in Rome, for example, still displays a whole skull. According to the Bollandists, other churches across Europe also claim to own slivers and bits of one or the other St. Valentinus’ body: For example, San Anton Church in Madrid, Whitefriar Street Church in Dublin, the Church of Sts. Peter and Paul in Prague, Saint Mary’s Assumption in Chelmno, Poland, as well as churches in Malta, Birmingham, Glasgow, and on the Greek isle of Lesbos, among others.

For believers, relics of the martyrs signified the saints’ continuing their invisible presence among communities of pious Christians. In 11th-century Brittany, for instance, one bishop used what was purported to be Valentine’s head to halt fires, prevent epidemics, and cure all sorts of illnesses, including demonic possession.

As far as we know, though, the saint’s bones did nothing special for lovers.

Many scholars have deconstructed Valentine and his day in books, articles and blog postings. Some suggest that the modern holiday is a Christian cover-up of the more ancient Roman celebration of Lupercalia in mid-February.

Lupercalia originated as a ritual in a rural masculine cult involving the sacrifice of goats and dogs and evolved later into an urban carnival. During the festivities half-naked young men ran through the streets of Rome, streaking people with thongs cut from the skins of newly killed goats. Pregnant women thought it brought them healthy babies. In 496 A.D., however, Pope Gelasius supposedly denounced the rowdy festival.

Still, there is no evidence that the pope purposely replaced Lupercalia with the more sedate cult of the martyred St. Valentine or any other Christian celebration.

Chaucer and the love birds

The love connection probably appeared more than a thousand years after the martyrs’ death, when Geoffrey Chaucer, author of “The Canterbury Tales” decreed the February feast of St. Valentinus to the mating of birds. He wrote in his “Parlement of Foules”:

“For this was on seynt Volantynys day. Whan euery bryd comyth there to chese his make.”

It seems that, in Chaucer’s day, English birds paired off to produce eggs in February. Soon, nature-minded European nobility began sending love notes during bird-mating season. For example, the French Duke of Orléans, who spent some years as a prisoner in the Tower of London, wrote to his wife in February 1415 that he was “already sick of love” (by which he meant lovesick.) And he called her his “very gentle Valentine.”

In the following centuries, Englishmen and women began using Feb. 14 as an excuse to pen verses to their love objects. Industrialization made it easier with mass-produced illustrated cards adorned with smarmy poetry. Then along came Cadbury, Hershey’s, and other chocolate manufacturers marketing sweets for one’s sweetheart on Valentine’s Day. 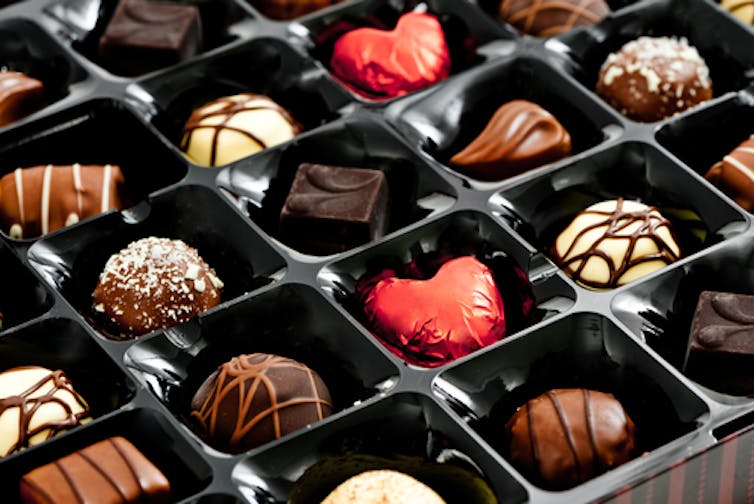 Today, shops everywhere in England and the U.S. decorate their windows with hearts and banners proclaiming the annual Day of Love. Merchants stock their shelves with candy, jewelry and Cupid-related trinkets begging “Be My Valentine.” For most lovers, this request does not require beheading.

It seems that the erstwhile saint behind the holiday of love remains as elusive as love itself. Still, as St. Augustine, the great fifth-century theologian and philosopher argued in his treatise on “Faith in Invisible Things,” someone does not have to be standing before our eyes for us to love them.

And much like love itself, St. Valentine and his reputation as the patron saint of love are not matters of verifiable history, but of faith.

Cities with the largest homes

Cities with the largest homes

How to love yourself this Galentine's Day

Who needs Valentine's Day during a year when getting close to people means you could catch a lot more than a case of lovesick?

Americans are predicted to spend $2 billion on candy for Valentine's Day this year. Here's a look at what they're buying.