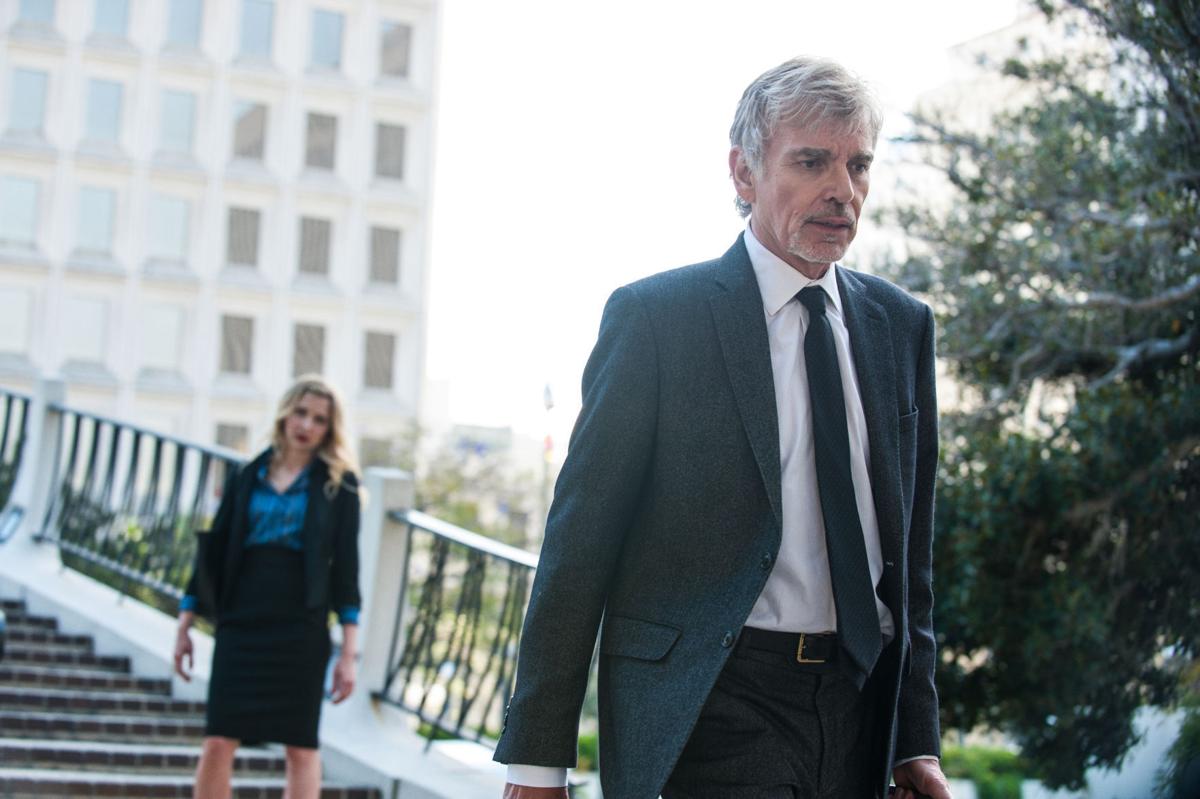 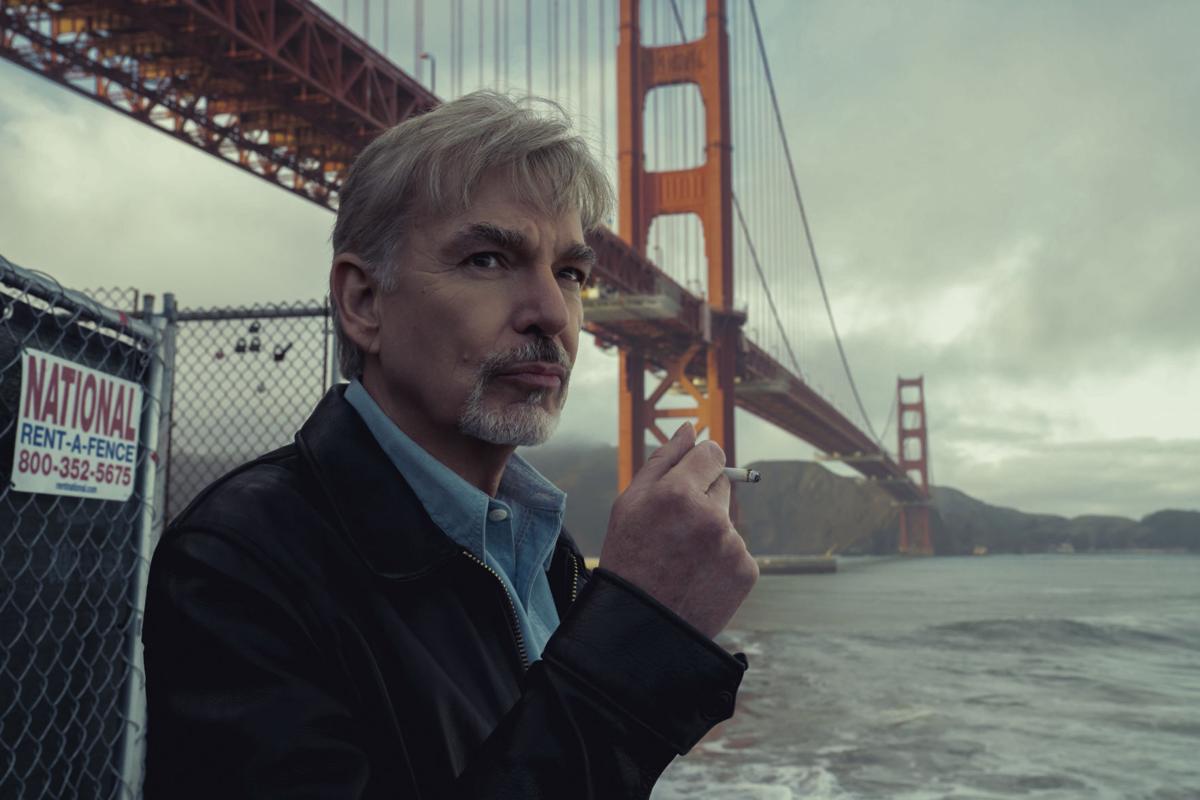 Billy Bob Thornton stars in the fourth and final season of "Goliath." 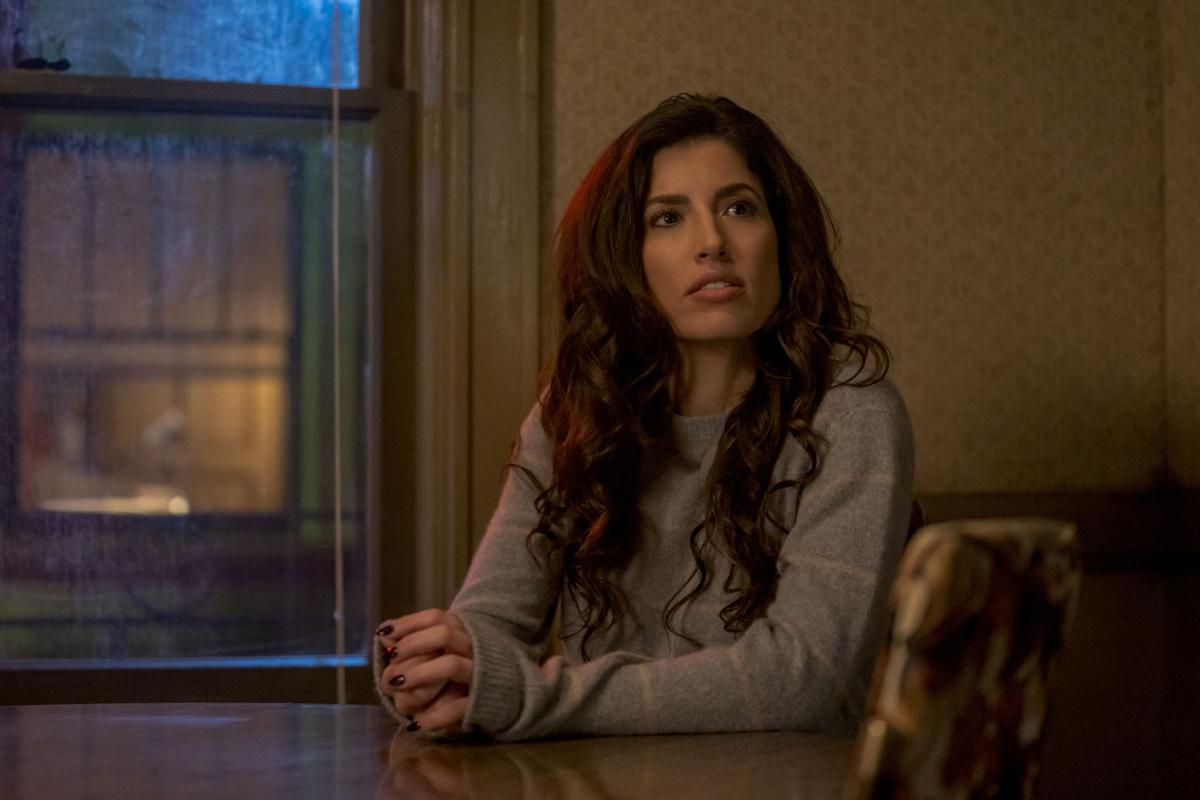 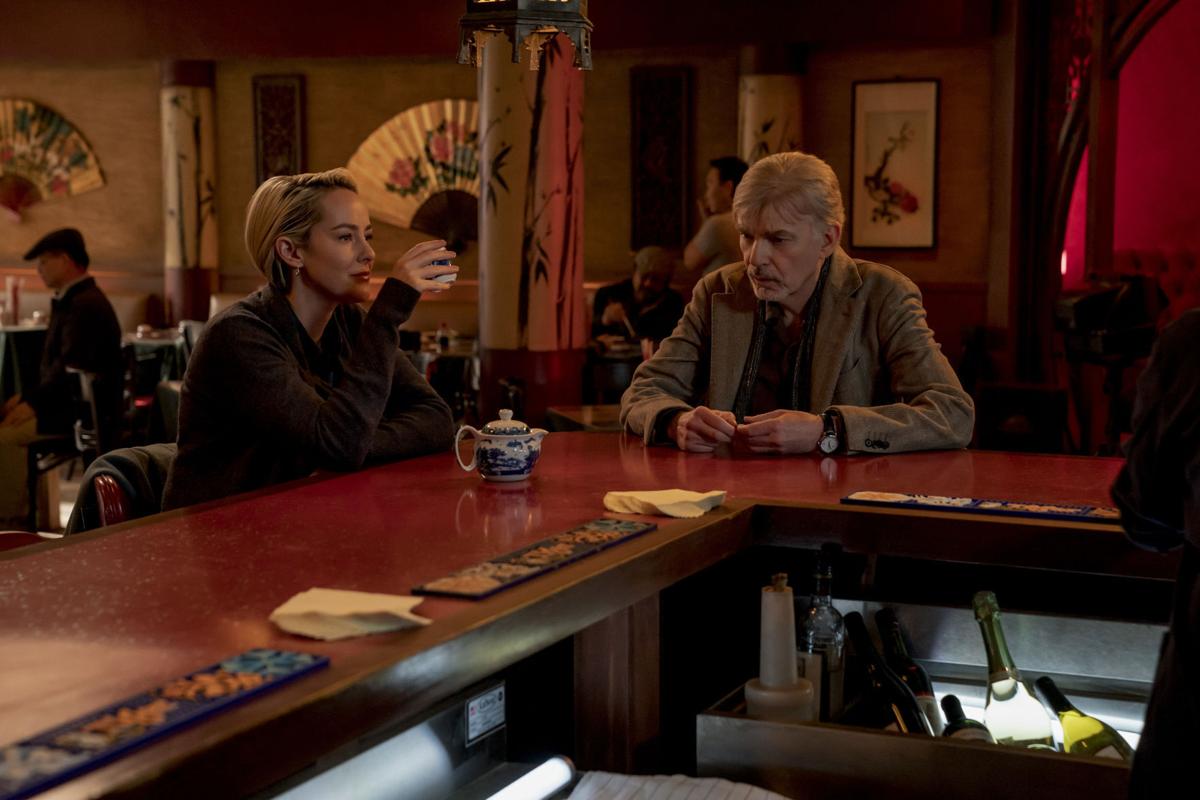 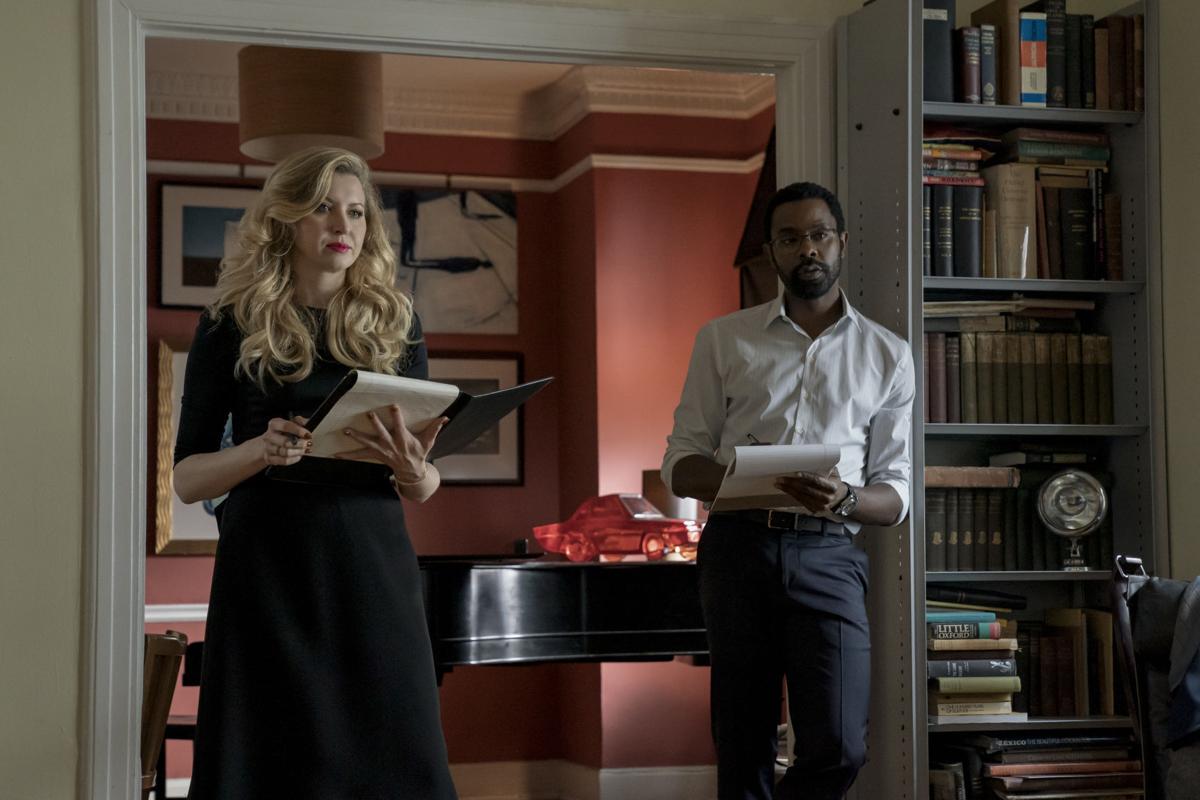 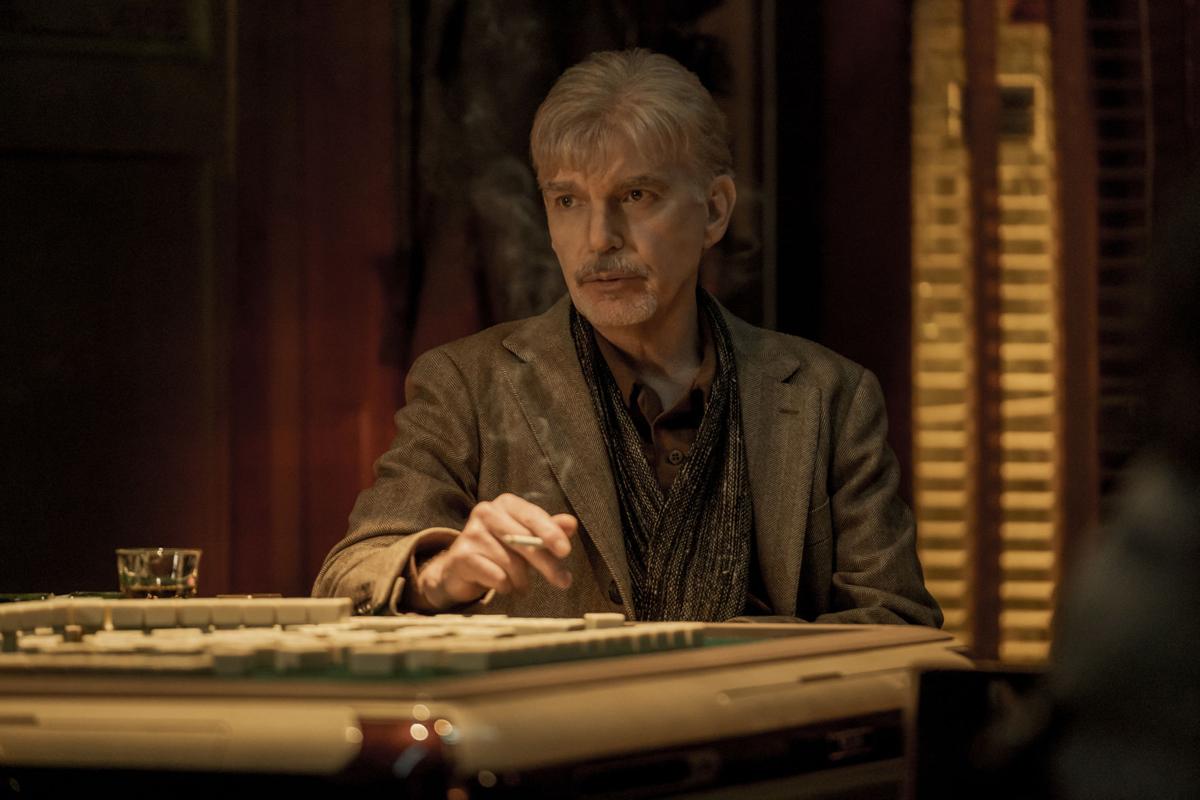 Billy Bob Thornton plays a lawyer going after big pharma in the fourth season of "Goliath." 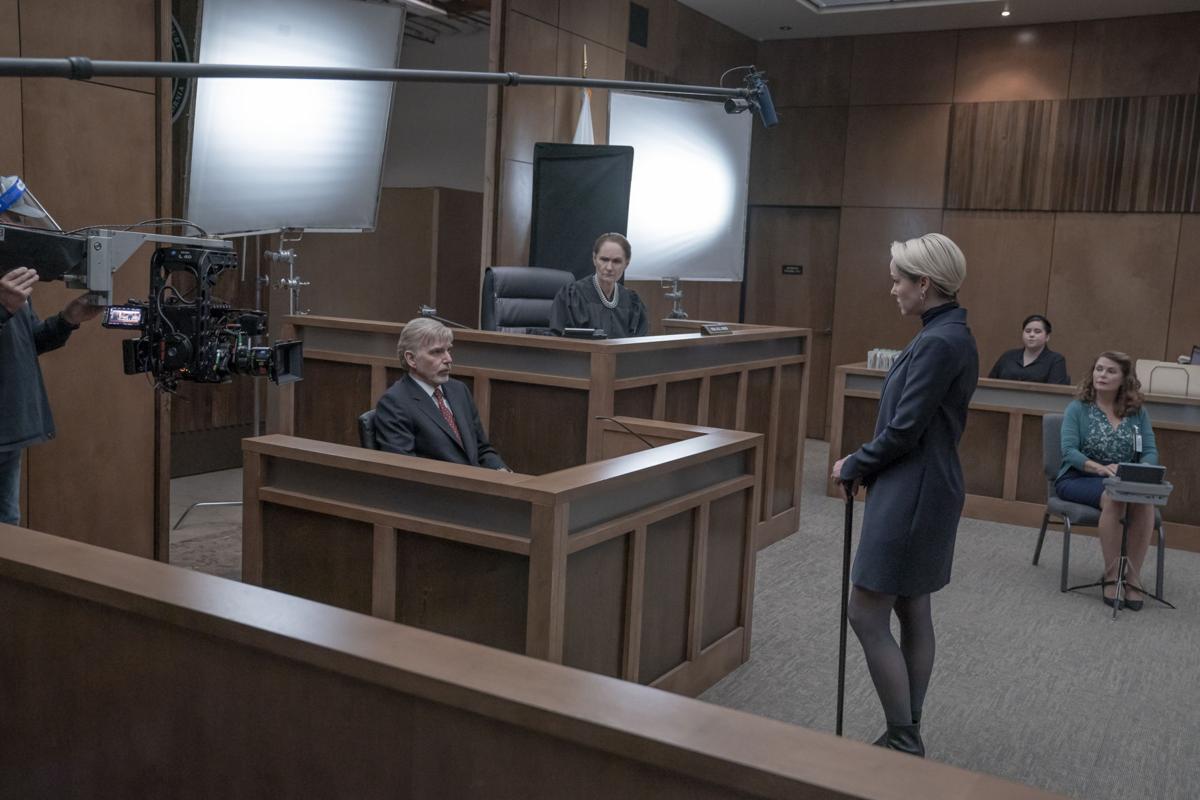 Jena Malone questions Billy Bob Thornton during a scene in the fourth season of "Goliath." The two were reunited after more than a decade.

As “Goliath” enters its fourth – and final season – star Nina Arianda admits it never felt like a television series.

Because it’s so cinematic, she says, “it keeps everything very fresh and exciting and on your toes.” As Billy Bob Thornton’s partner in the Amazon Studios venture, she was able to see how a character could try to right the wrongs created by the legal system.

In the last “case,” Thorton’s Billy McBride takes on the opiod crisis, trying to get justice for those harmed by one of big pharma’s products.

Complicating matters: a boss (played by Jena Malone) who suffers from a debilitating medical condition.

When Malone first met Thornton – on the set of “Behind the Sun” – “I was 16 and he played my dad,” she says with a smile. “He treated me with so much respect. It was so sweet – I think I was more in awe of him. Now it’s fun to be like soldiers in arms.”

While she had heard of “Goliath,” Malone hadn’t watched it. “In my parent journey, I wasn’t bingeing a lot of stuff. I didn’t have that amount of time yet. But I read three episodes and said yes. Then I took a deep dive and fell in love with it. It’s so entertaining. It has great actors and great characters and each time it’s so important that they conquer some sort of crisis in America.”

Tania Raymonde, who plays McBride’s friend and associate, Brittany, says “Goliath” never took the easy way out. “Brittany has really surprised me,” she says. “This is a testament to the writing, every single time. I realized today I probably judged her a little bit in the beginning. She made the opposite choice of what I thought a character like her would do.

“She was smart to begin with…but she was at a crossroads in her life. And I think Billy’s made her change a lot. The two of them were like kindred spirits, mirrored souls. I see their friendship.”

Like others in the cast, Raymonde can’t say enough about Thornton’s leadership. “I’ve never had more fun acting with anyone in my entire life,” she says. “He’s the coolest cat on the planet and one of the easiest people to get along with.”

Adds Arianda: “I feel blessed that Billy and I became such good friends. I respect the heck out of him.”

Brandon Scott, who joined the series in the fourth season, didn’t know quite what to expect, particularly since “Goliath” had been chugging along for years. “It’s like the first day of school,” he explains. “You’re nervous about meeting everyone and fitting in – ‘Where am I going to sit for lunch?’ – but then everyone was warm and welcoming and made it easier. After a while, you get into the rhythm and then, it just becomes pure fun.”

Thornton and Arianda took him under wing and “it was like I’d (always) known them.”

While Scott read plenty about law before starting the series, he realized “I would not be a good lawyer because I don’t like debates. I like discussions, but I don’t like the idea that you have to win this debate.”

The legal world, he says, is filled with a lot of pressure.

There’s an air of showmanship, too, Arianda says. “You’re telling a story and you are trying, in some way, to influence people through your story.”

While “Goliath” introduced her to all aspects of the legal system, she found her view of lawyers has changed. “I’m much more hopeful in the legal process,” she says with a laugh.

While all four of the actors are going on to other things (Arianda, for example, is playing Vivian Vance in a movie about “I Love Lucy” and Raymonde is directing a film), they say the time spent on “Goliath” was educational – and inspiring.

“I honestly thought I’d never leave the church of theater,” says the Tony-winning Arianda. “And this was so good. They’re two very different disciplines, so it’s been very exciting.”

Adds Raymonde: “This show has been so different every year. It felt like four shows. But art kind of imitated life on this one. I learned a couple of things from Brittany, too, and I’m really sad. Every scene you’re in with Billy is like an electric charge of fun and it feels so damn real all the time.”

Betty White's assistant shares one of her final photos

"She was radiant and beautiful and as happy as ever," the post read. See how Betty White was celebrated on what would have been her 100th birthday.

Fictional hospitals make for great television. However, what happens every week on medical dramas is often not what happens in real life.

The actors in the new medical drama, “Good Sam,” have gotten so into their work they’re swapping surgical videos they find on the internet.

A follow-up to “How I Met Your Mother” might have happened a lot sooner. “This Is Us” just got in the way.

How does a writer/director address social issues in a superhero series? Through normalization, Ava DuVernay says.

Writer/producer Phil Augusta Jackson didn’t have to go far for inspiration for his latest series, “Grand Crew.” He found it in a wine bar.

‘Scream: The True Story’: Inside the Horrific Findings of the Documentary

Paranormal investigator Steve Shippy and psychic medium Cindy Kaz explore the horrific history of 'The Gainesville Ripper' like never before.

Showtime brings back "Ray Donovan" for a movie-length finale to bring closure to the dark drama. Denzel Washington and Frances McDormand headline "The Tragedy of Macbeth," generating Oscar buzz.

REVIEW: 'Cheer' tumbles back with new drama, lots of conflict

It isn’t “business as usual” in the second season of “Cheer.”

Rebecca Sonnenshine answers our burning questions and reveals what she hopes to explore in Season 2.

Billy Bob Thornton stars in the fourth and final season of "Goliath."

Billy Bob Thornton plays a lawyer going after big pharma in the fourth season of "Goliath."

Jena Malone questions Billy Bob Thornton during a scene in the fourth season of "Goliath." The two were reunited after more than a decade.