A Madison man who witnessed Elvis Presley famously break up a fight on East Washington Avenue in 1977 is waiting for the crowds to thin a bit before seeing the new movie, “Elvis.”

The film, which came out June 24, was No. 1 at the box office in its opening weekend.

“It was a really particular moment, I recall, and it was so obscure and it grew to be part of a legend in Madison,” said Frey, a former Madison police detective who retired from the force about nine years ago after a 30-year career.

“Half the people believed it and half didn’t,” said Frey, 65, who researched the incident when he got close to retirement, and wrote the definitive article about it for a website called Elvis Information Network.

“I was able to contact people in the know, the insiders, the security people that were with him,” he said. “I got all their versions of the story and compiled it for an article.”

The incident happened when Elvis came to Madison to perform at the Dane County Coliseum, less than two months before his death, on Aug. 16, 1977.

According to a Wisconsin State Journal account the next day by reporter Tom Still, Presley flew into town shortly after midnight on June 24, was picked up at the airport by his security escort, and was traveling on East Washington Avenue on his way to The Edgewater hotel.

While his limousine was stopped at East Washington Avenue and Stoughton Road, Presley noticed two young men hassling Keith Lowry Jr., then a 17-year-old La Follette High School student working as an attendant at the Skylane Standard Station owned by his father.

“(Presley) said, ‘Look at those two punks; I don’t buy this two-on-one deal’; so he told the driver to wait because the attendant might need some help,” Thomas J. McCarthy, then a Madison police detective and part of the Elvis security detail, told Still. “A couple of minutes later, they started fighting and out of the car goes Elvis.

“He (Presley) was willing to fight, that’s the bad part,” McCarthy said.

All three youths were stunned, to say the least, Still wrote. “It’s nearly 1 a.m. and Elvis Presley — still wearing a blue jumpsuit from his Des Moines concert a few hours earlier — is ready to kick-box. It was like a scene from one of those bad beach movies Elvis made in the 1960s.”

“If you want to fight, let’s fight,” Elvis told the two young men.

“When they saw who he was, there wasn’t any more fighting,” McCarthy told Still. “Then (Elvis) said, ‘I found you as enemies; I leave you as friends,’ and got back in the car.”

In the article, Frey told Still that Elvis then asked, “Is everything settled now?”

Then, Presley shook hands with several bewildered onlookers before climbing into his limo, McCarthy told Still, and several photographs were taken to commemorate his biggest rumble since “Jailhouse Rock.”

McCarthy said afterwards that Presley seemed amused by the whole thing. “He said, ‘Did you see those guys’ faces?’”

Today, a plaque at the scene commemorates the event. The plaque is set into stone, and surrounded by flowering plants in front of Schoepp Motors, at the car dealership’s eastern edge.

But the details on the installation vary slightly from the news account and state that Elvis was staying at the Sheraton instead of The Edgewater.

Joseph Reque, 26, a Schoepp salesman, said that a fair number of people visit the marker and take pictures of it.

Reque said he’s not a diehard fan, but might go see the movie.

“I know quite a bit about him,” Reque said, “but it’s not like I’ve got like posters in my room or something.”

Frey, who lives in the Door Creek neighborhood on Madison’s Far East Side, remembers driving to the airport with his sister to see Elvis’ plane come in.

He soon realized that they weren’t going to be able to see the star because they were too far away. When they headed back on Stoughton Road to East Washington Avenue, they were behind a limousine, but Frey said he never suspected it was Elvis.

Frey said he noticed a disturbance next to him with “two guys basically beating up a gas station attendant.” He then saw the limo stop.

“What I remember most is a foot coming out first to make the car stop, because the car was slowly rolling,” Frey said. “I learned later they were arguing about whether to stop or not. They didn’t want to stop.

“Then I remember seeing Elvis jump out of the back of the car. You immediately recognized him as Elvis. I don’t know how to even explain it. You knew it was him right away.”

Elvis went into a karate stance to get the boys’ attention, and said, “I’ll take you two on,” Frey remembered.

A story with legs

Frey said he’s been interviewed many times over the years and his account is in numerous Elvis publications.

He was recently contacted by a Dutch author who interviewed him for a book, “In search of Elvis.”

The event is also in two books, “Weird Wisconsin” and “Wisconsin Curiosities.” Mentions of the fight are in most Elvis books that came out after the event, Frey said.

However, the incident doesn't make it into the two-and-a-half hour movie.

Frey said his wife walks away when people ask him about the fight.

Eldorado Grill, on the Near East Side, one of Food Fight restaurant group's oldest and most prominent restaurants, is set to close Aug. 31.

Every time Tami Lax thinks she's ready to reopen Harvest, her Capitol Square restaurant, where the dining room has been closed since the start of the pandemic, she hesitates.

The Great Taste of the Midwest is 'a beautiful day in the park' with beer and friends, says its chairman

Jason Walters, who chairs the Great Taste of the Midwest beer festival, says the local favorite is "really excited to be back to a full-scale event this year."

Our top 7 events for your weekend

From "Hamilton" to Gilbert and Sullivan, there's food, music, spoken word and dancing aplenty ahead.

Vin Santo, the homestyle Italian restaurant in Middleton that's been closed for nearly two years because of the pandemic, is set to reopen at the end of October.

Restaurant review: A visit to Sookie’s Veggie Burgers will make you feel happy and healthy

Sookie's paired with SuperCharge inside is a healthy oasis on State Street.

Tommy Lee exposes himself online, what to expect at the Field of Dreams game, and more trending news

Rocker Tommy Lee posted a full-frontal nude photo on Instagram and Facebook early Thursday that he cheekily captioned with "Ooooopppsss." Get that and more trending news here.

The Madison author, who also has written about Vince Lombardi and Roberto Clemente, will will discuss "Path Lit by Lightning" during an event hosted by the Wisconsin Book Festival later this month.

Elvis died 45 years ago today. He once famously broke up a fight in Madison

Read eyewitness accounts from the time Elvis broke up a fight at a Madison gas station.

Draft Queen: Supermoon Beer Co. reminds us why craft is a key part of craft brewing

Superb beer relies on an understanding of ingredient nuances and palate profiles alongside the willingness to let the beer tell its maker when it is ready. 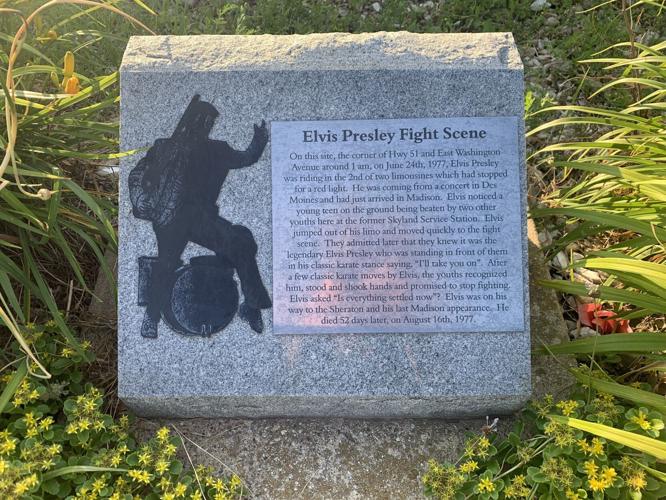 A plaque at the scene commemorates a day 45 years ago when The King broke up a fight at an East Side Madison gas station. 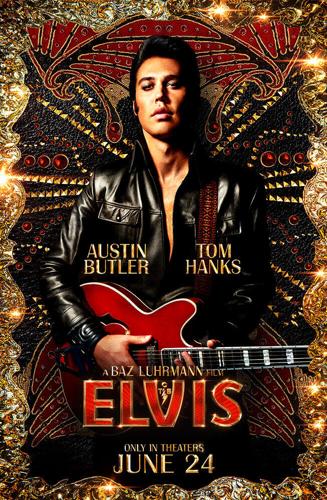 "Elvis" came out June 24 and was No. 1 at the box office opening weekend. 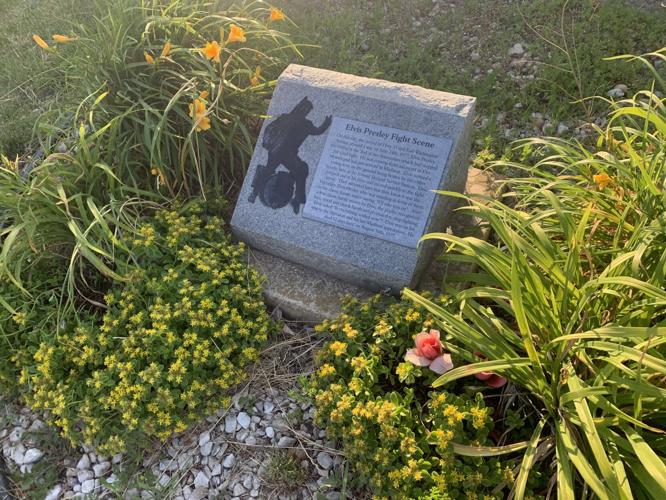 The Elvis plaque is in front of Schoepp Motors, at East Washington Avenue and Stoughton Road. 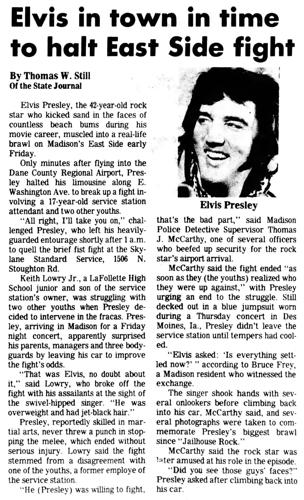 The Wisconsin State Journal's June 25, 1977, account of the time Elvis Presley broke up a fight in Madison.