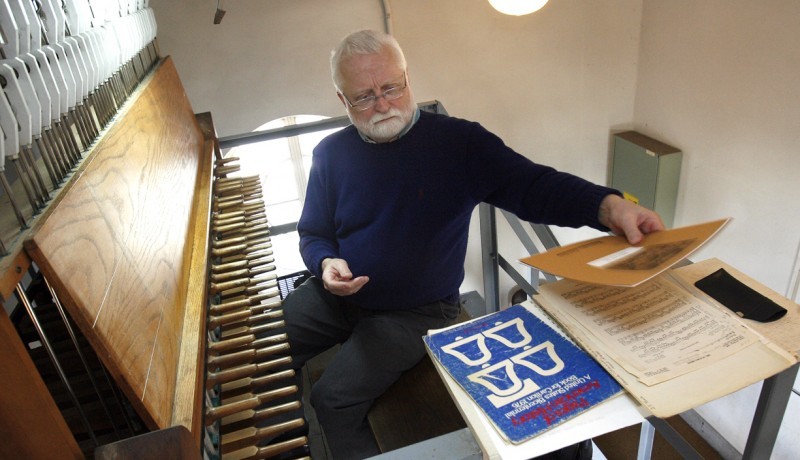 Lyle Anderson, carillonneur, at the Carillon Tower at UW-Madison. 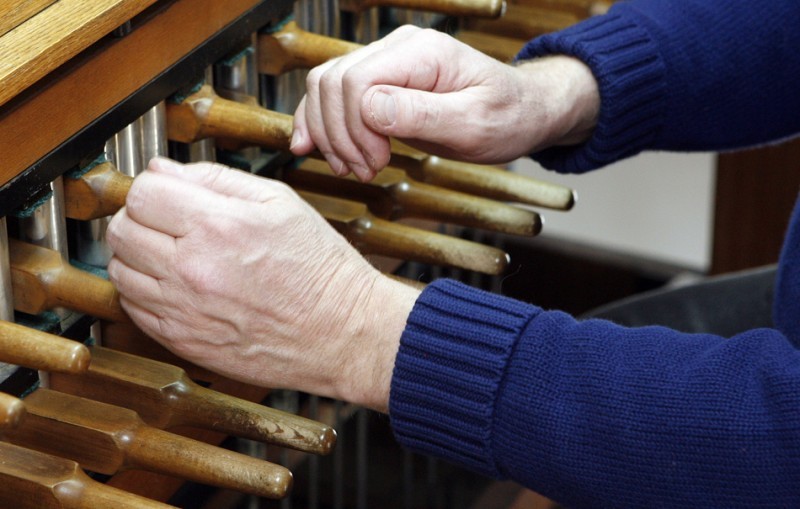 Each bell has a clapper attached by wire down to one of the carillon's wooden batons, organized like piano keys but depressed with the pinky side of the fist. 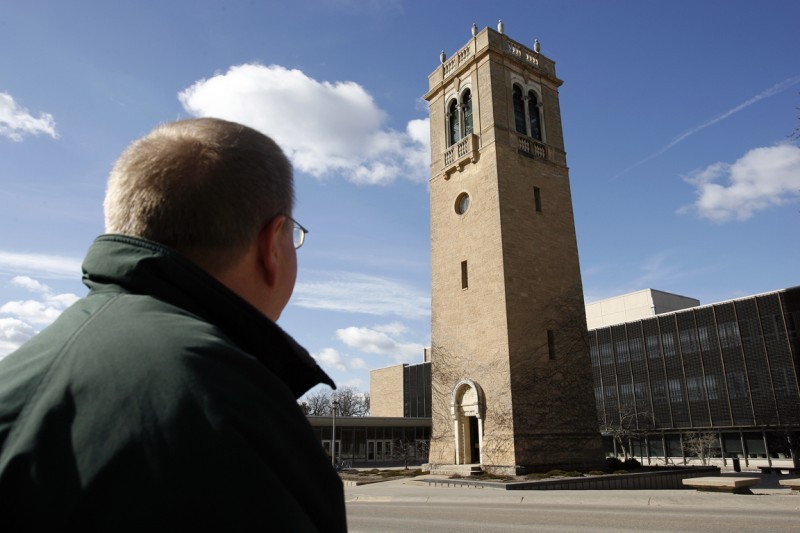 Mike Crane of Madison listens as Lyle Anderson, carillionneur, plays the carillon on Sunday at UW-Madison in Madison. 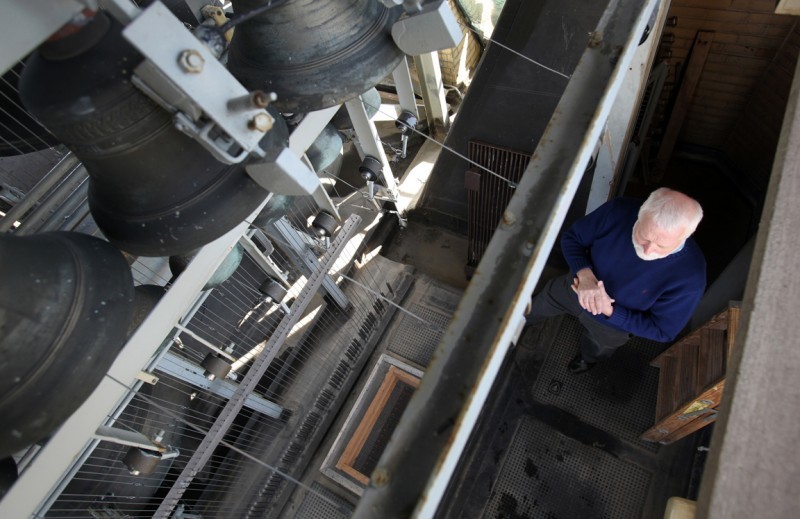 Lyle Anderson, carillonneur, shows the bells in the bell tower before performing on Sunday.
By KATJUSA CISAR | The Capital Times |

Lyle Anderson never listens to music casually. His musicology professor in the '60s, dismayed that students listened to music as they studied, drummed that ethic into him. Now he often enjoys listening to Anton Bruckner and Gustav Mahler symphonies with the scores in hand.

Since 1986, he's been the official carillon player, or carillonneur, at UW-Madison. Every Sunday at 3 p.m. when school is in session, he opens up the Carillon Tower on Bascom Hill and performs a one-hour concert on the fully mechanical, four-and-a-half octave, 56-bell instrument (as a comparison, a piano has 88 keys).

On a recent sunny Sunday afternoon, he left the door to the tower open. Curious passersby, most of them college students, cautiously climbed the flights of stairs into the tower to check it out. They gaped with the enthusiasm of kids watching a heavy-duty frontloading truck at a construction site mixed with the reverence of adults in a museum. A guest book, started in October 1995, shows thousands of signatures.

"That is so raw!" said a young guy wearing colorful sneakers as he descended from the open-air belfry above Anderson.

The 1930s tower overlooks Picnic Point to the west, Lake Mendota to the north, the Capitol to the east and a jumble of campus rooftops to the south. But the bells, installed over decades, are most impressive. The Big Papa and Big Mama bells are stove-sized, at least. The smallest row of bells ranges in size from gallon milk jugs to rotisserie chickens.

The whole system works like a teeter-totter. Each bell has a clapper attached by wire down to one of the carillon's wooden batons, organized like piano keys but depressed with the pinky side of the fist.

It's intimate in its mechanical simplicity, said Anderson, who grew up on a dairy farm in northern Wisconsin and studied carillon at UW-Madison and in the Netherlands. He could use an electronic keyboard to play the bells, he said, but that would defeat the musicality of the carillon, which gives him the ability to control volume and give the music nuance.

He's accustomed to, and welcomes, the curious into the tower. But he worries that too many come to ooh and ahh over the mechanics inside, then continue on their way without staying to enjoy the music outside - where it sounds best.

Very few people on Observatory Drive stopped long to listen to the concert. A few did, though. An athletic guy lay prostrate in the sun directly outside the carillon for a while, his head resting on a football like a pillow. Across the street, Mike Crane sat on a bench and listened.

"I was in the office doing some work and I thought, ‘You know, I need a little stretch,'" said Crane, chief operating officer at Wisconsin Public Radio, which has its offices in nearby Vilas Hall. He keeps a reminder of Anderson's weekly concert in his calendar, in case he's at work and looking for a diversion.

Anderson chooses the concert's program himself, despite a persistent and false rumor that he'll play any sheet music people bring up to him. It's a mix of accessible and "fresh" music with a dash of "quirky, intellectual" material, he said.

On this Sunday, he'd assembled a selection of his favorites: Erik Satie, Johann Sebastian Bach, Mathias van den Gheyn, and more by obscure composers who wrote for carillon only.

This is not basic, pretty Sunday morning bell-ringing. The Satie piece, "Gnossienne No. 1," is haunting and modern.

An adaptation for carillon of Irving Berlin's "Give Me Your Tired, Your Poor" proves why the carillon's baton system is superior to an electronic keyboard for playing the bells, Anderson said. The melody switches to the lower register in the second verse, and the sensitivity of the mechanical batons allows him to bring it to the fore. A keyboard would plunk it out without soul.

Using the carillon is not about historical accuracy, he said, it's about good music. But there's a lot of history behind it.

This year, the carillon turns 500 years old. For a couple of centuries, it was an "important civic instrument," he said, "and then it went into an eclipse." It was rediscovered around the turn of the last century.

Anderson is very matter-of-fact about his attraction to the carillon. The sound is "pleasing," but he doesn't wax too philosophical about its musicality. Of the instruments he's played, it's simply the one he plays best. Now 63, he expects to play into his 80s.

No one's beating down the door to learn the carillon at UW-Madison, but he's not worried about who will take his place. "Somebody'll come along. There are plenty of people who fret about that," he said. There aren't many full-time jobs in the field, anyway. Anderson's position is a "tiny little job that wouldn't even pay my rent," and he supplements it with church organ gigs and part-time work at the Wisconsin State Climatology Office.

The last student to express interest in playing the carillon was Tim Rusterholz, a composition major in the School of Music, said Richard Mumford, the school's public relations director and concert manager. His grandfather was Theophil Rusterholz, a carillonneur at House of Hope Presbyterian Church in St. Paul, Minn.

"It was not at all similar to other carillon recitals that I've heard," Mumford said.

Anderson is returning with his own annual series of summer carillon recitals on Thursday evenings in July, plus a holiday program on July 4, (a Sunday).

At the end of a recent hour-long Sunday afternoon concert, Anderson changed from his carillon shoes (just clean oxfords, really) and into outdoor shoes, then walked down to lock up the tower. He's taken it upon himself to tend to the garden around the building. Every Sunday, he takes a photo of the grounds. It's a good way to keep track of the changing seasons, he said.

Not much was growing in the garden, but a recent snowmelt exposed a winter's worth of debris.

"You know what is growing in this garden? Earbuds!" he exclaimed, pulling up a few strands of the ubiquitous white iPod wires.

When:3 p.m. every Sunday when UW-Madison classes are in session

Demi Lovato thinks the term 'aliens' is 'derogatory' to extraterrestrials

Lovato explained that they do not believe that beings from another planet mean to harm humans.

As Billy Prine prepared to hit the road to perform the songs of his late brother, John Prine, one of the most celebrated singer-storytellers the world has known, he said he's still trying to get his "head wrapped around him not being here."

Adele's new single, 'Easy On Me,' has finally dropped. So what's the verdict?

Reactions to Adele's new single are in. Listen to "Easy On Me" here.

The 2021 BET Awards aired Tuesday night and it was a big one for Tyler, the Creator, Cardi B and Megan Thee Stallion.

Lyle Anderson, carillonneur, at the Carillon Tower at UW-Madison.

Each bell has a clapper attached by wire down to one of the carillon's wooden batons, organized like piano keys but depressed with the pinky side of the fist.

Mike Crane of Madison listens as Lyle Anderson, carillionneur, plays the carillon on Sunday at UW-Madison in Madison.