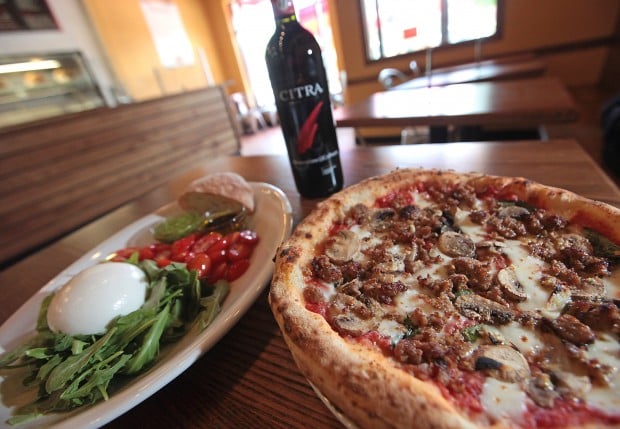 Novanta's salsiccia pizza ($8.25) with Italian sausage, mushrooms, garlic, and basil proved to be a satisfying combination with extremely fresh and flavorful basil. It's pictured with the house mozzarella plate with pesto, cherry tomatoes, olive oil and balsamic vinegar. 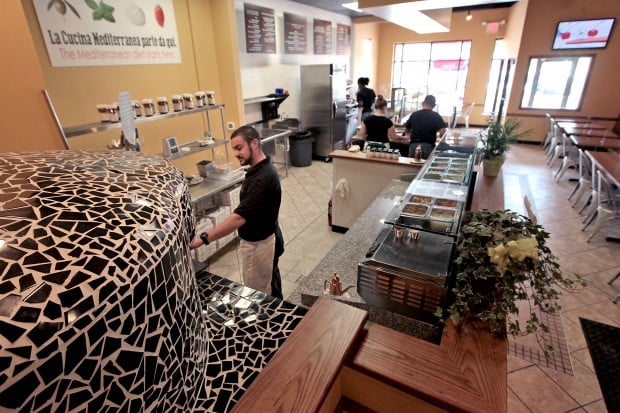 Novanta co-owner Nick Mattioli puts a pizza in the restaurant's hand-tiled wood-burning oven. The name "Novanta," or 90, and refers to the 90 seconds it takes to cook the pizzas 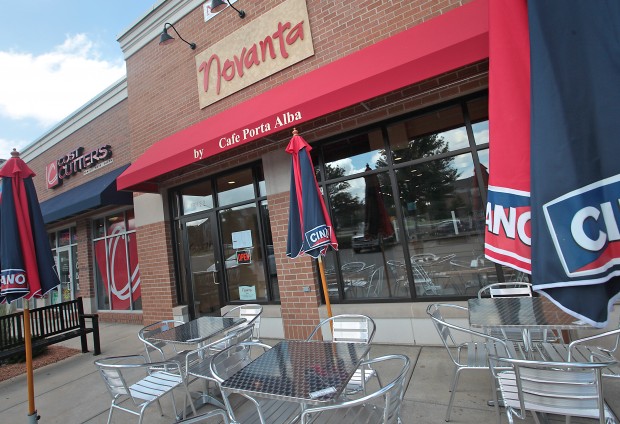 Neapolitan pizza places are now more common in Madison than Domino’s ﻿or even Pizza Hut locations. And that says a lot about the local food culture.

The newest, Novanta, turns out pizzas that are as good or better than the rest, and best of all, its pizzas don’t skimp on the cheese and other ingredients the way so many authentic Neapolitan pies do.

The narrow restaurant space is painted a gentle yellow with giant images of mozzarella-making in the front area. A couple of TVs sit on opposing walls but don’t detract from the atmosphere.

Customers order at a counter from sincere, friendly and helpful employees, and serve themselves from an elaborate water and ice dispenser. Lemon slices are self-serve, too.

The name “Novanta” is 90 in Italian, and refers to the 90 seconds it takes to cook the pizzas in a gorgeously tiled wood-burning oven behind the counter. And the subsequent turn-around time almost qualifies Novanta as fast food.

Of the 12 predetermined pizza varieties, the salsiccia ($8.25) with Italian sausage, mushrooms, garlic, and basil proved to be a satisfying combination with extremely fresh and flavorful basil.

Crushed San Marzano tomatoes — instead of a tomato sauce — lined the crust, which was soft and chewy rather than crisp, its edges slightly charred. It was cut into four giant slices, which we wound up cutting into eight ourselves.

Novanta’s mozzarella bar is a creative feature, allowing customers to select from three different types of mozzarella, including a house-made version, and match it with various add-ons.

The smoked buffalo mozzarella ($9) imported from Italy had a wonderful campfire quality and was served in a giant half sphere. We added the works: prosciutto, ham, salami and spicy salami ($3.50).

It was a generous plate served with oil and vinegar and a wedge of sourdough bread, and made for a great starter course.

The cotto panini ($7.25) with fontina cheese, ham and arugula proved a glamorous Italian ham and cheese. It came with a dish of the highest quality olive oil and a deliciously sweet balsamic vinegar, which elevated the sandwich to a new level.

But the real game-changers were the salads. When an acquaintance once asked where she could go for a truly great salad, only a few places came to mind.

Move Novanta to the top of that list. The gorgonzola ($7.25) featured spring mix with spinach and dandelion greens, the namesake cheese, dried cranberries and lots of walnuts. Dried cranberries can make almost any salad seem remarkable, and they worked perfectly with the other ingredients.

Just as rewarding was the gorgeous garbanzo salad ($8) with the same lettuce combination plus red and yellow pepper strips; strong-tasting, pitless kalamata olives; and large shavings of Parmesan on top. It couldn’t have looked more beautiful. My companion, who takes pictures of her food when traveling, wished she’d brought her camera.

The personable and gregarious co-owner Nick Mattioli came over to grind fresh pepper on my salad. That’s not something you usually expect at a quick-service restaurant.

Of the desserts, the hazelnut gelato ($3), which is imported from Italy, was best, its hazelnut flavor really intense.

The tiramisu ($5) stood out from most with its feathery-light cheese mixture in a giant dome over the slight, spongy cake layer. It was exceptionally creamy and not overly sweet, but ultimately lacked flavor.

The pizza Nutella ($7) was two pizza crusts with the hazelnut spread between them. Nutella is Italian for “God’s food,” a companion quipped, but the Nutella couldn’t carry this dessert pie. The crusts were just too chewy and made eating it a chore. You really have to be enamored with Novanta’s pizza crust to enjoy it.

Nevertheless, that is a small quibble about a place where almost everything succeeds.

The Far West Side is lucky to get this offshoot of Porta Alba. With its low prices, quality ingredients and speedy service, the Cousins Subs and Chipotle Mexican Grill in the same strip mall better look out.

Discerning diners with 90 seconds to spare know where to go now.

Gluten-free: Salads and some desserts are GF.

Bottom line: The Far West Side is lucky to get this offshoot of Cafe Porta Alba with its delicious pizzas and sandwiches. However, it's the salads that really shine here. And the kitchen turn-around time almost qualifies it as fast food. Should appeal to vegetarians and children.

Novanta's salsiccia pizza ($8.25) with Italian sausage, mushrooms, garlic, and basil proved to be a satisfying combination with extremely fresh and flavorful basil. It's pictured with the house mozzarella plate with pesto, cherry tomatoes, olive oil and balsamic vinegar.

Novanta co-owner Nick Mattioli puts a pizza in the restaurant's hand-tiled wood-burning oven. The name "Novanta," or 90, and refers to the 90 seconds it takes to cook the pizzas