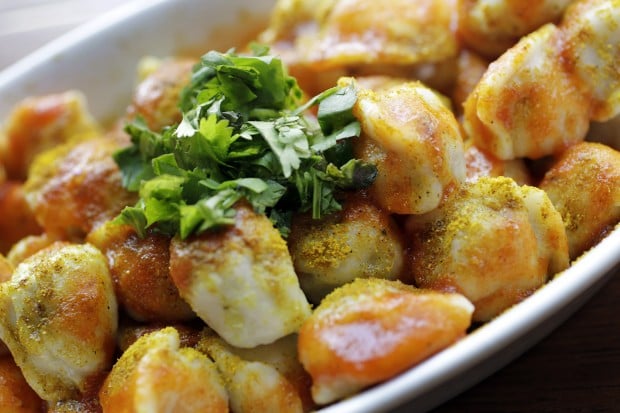 A full order of dumplings, mixed, with the works. 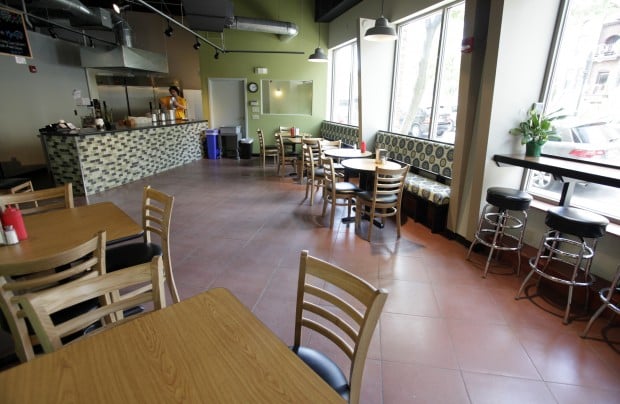 Paul's Pel'meni has a playfully-patterned banquette along one wall, and the attractive glass subway tile pattern of the counter plays nicely off of bright sage green walls. 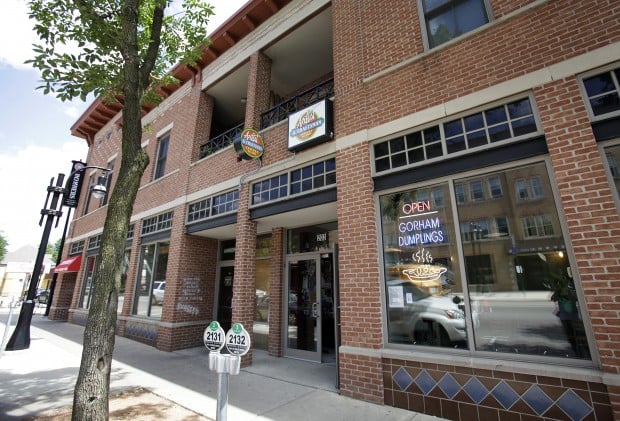 Paul's Pel'meni was carved out in a space next to AJ Bombers. Its neon sign reads "Gorham Dumplings."

This is going to be short review. I mean, how much can you say about a place with only one menu item?

Paul’s Pel’meni officially opened July 1, a relaunch of the single-item dumpling shop Pel’meni, which had a cult following serving Russian dumplings on State Street a decade ago.

In recent years, the former owner, Paul Schwoerer, sold the dumplings out of his coffee shop/cafe in Fitchburg, Oasis Cafe and EVP coffee shop, and they had quite a following there.

He discontinued the pel’meni (“dumpling” in Russian, pronounced “pell-mini”) at that location in June to focus on his new shop, just off State Street.

Schwoerer is still hearing from jilted Fitchburg customers. “I have a few people who are really upset about it. They are taking it way too personal,” he said in a recent phone conversation.

The new place was carved out in a space next to AJ Bombers that the 2-year-old burger joint hoped to expand into one day, and not far from Schwoerer’s original shop. Schwoerer opened that shop in 2003 and ran it for three years before having a falling out with his partner, who kept running it for two more years.

The new Gorham location has only six tables and a few bar stools at a counter by the window. The place is open seven days a week and the dumplings are boiled fresh as you watch. The old Pel’meni had late-night hours; and the new one intends to also, once UW-Madison students return in the fall.

Schwoerer said he plans to stay open until midnight or bar time. “It’s what everyone is requesting,” he said. “They want their drunken pel’meni.”

Whereas the old shop was dark and cramped in an old State Street storefront, the new place is bright and open in a relatively new mixed-use building. A playfully-patterned banquette sits along one wall, and the attractive glass subway tile pattern of the counter plays nicely off of bright sage green walls.

The menu, such as it is, is written above the counter in neon-colored marker. Customers choose from a full order ($6.50) or a half order ($4.50) and whether they want ground beef (Black Earth Meats), potato or a mixture of the two.

The final decision, whether you want “the works,” is more of a no-brainer. The works is: melted butter, sweet chili sauce, minced cilantro and a dusting of yellow curry on top, and a side of sour cream. No one who ordered after us neglected to order the works.

My companion estimated that the full order contained more than 30 of the soft, succulent little morsels. If Schwoerer is working you may get an order and a half, or upwards of 50. “I don’t know why,” he said. “I can’t help but do that.”

The dumplings are good without sour cream, but irresistible with it, and an extra serving of sour cream (50 cents) is a wise idea for the full order. The sour cream helps keep it cool, balancing the curry and chili sauce.

Even for carnivores, I recommend going with a mix of beef and potato, because although you can usually tell which is which by sight, it breaks up the monotony or sameness that I imagine only one variety would bring.

The potato inside the potato dumplings is a nice silky mash. My companion who ordered the meat variety kept sneaking bites of my mix to get more of the potato ones, which he enjoyed but termed “benign.”

He and I were both surprised that the shop offers no vegetable-stuffed variety and disappointed that there was no salad that we could order with our meal. A seaweed salad would be a particularly nice complement, we thought. Schwoerer does have plans to add a salad.

Beverages are found in a cooler to the left of the counter and are a reasonably-priced even dollar. It’s slightly inconvenient that the shop takes only cash, but tax is wisely included. Lunch or dinner for two is not going to ever top $15, particularly since Schwoerer has not yet added a salad to the menu.

So, maybe this review isn’t as short as I had imagined. Pel’meni is inherently engaging, providing ample fodder for discussion. These dumplings may be humble, but they provide the type of meal that leaves plenty to write home about.

Credit cards: No. Cash only.

Reservations: For large groups only.

Bottom line: Paul's Pel'meni may only serve one item, its namesake Russian dumplings, but the shop and its little stuffed dough balls deserve the loyal following they've enjoyed since Paul Schwoerer opened the original Pel'meni on State Street 10 years ago. Those who don't eat meat have an option here, while the dumplings should appeal to a kid's sensibility, too.

A full order of dumplings, mixed, with the works.

Paul's Pel'meni has a playfully-patterned banquette along one wall, and the attractive glass subway tile pattern of the counter plays nicely off of bright sage green walls.

Paul's Pel'meni was carved out in a space next to AJ Bombers. Its neon sign reads "Gorham Dumplings."