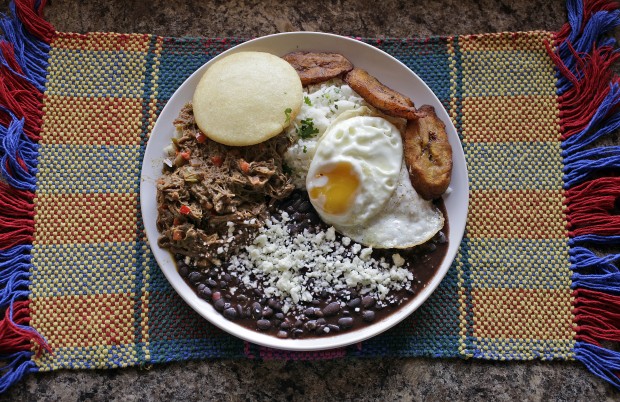 This version of the Venezuelan national dish, pabellon a caballo, has a sunny side up egg on top as well as an arepa. 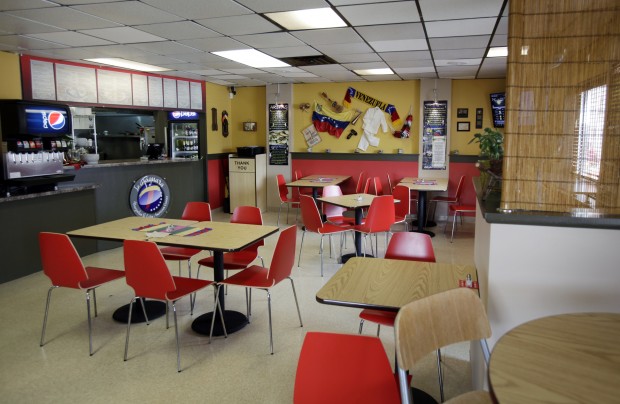 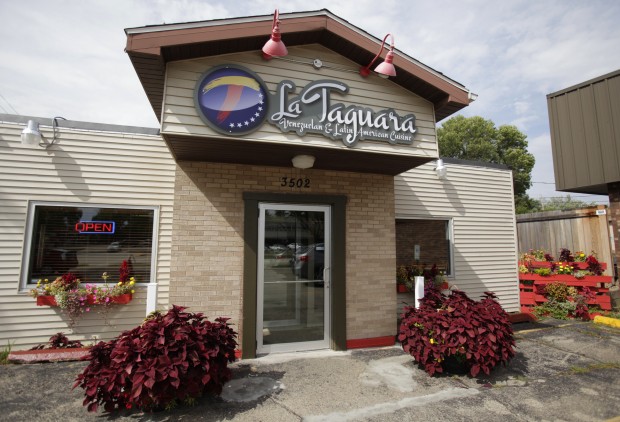 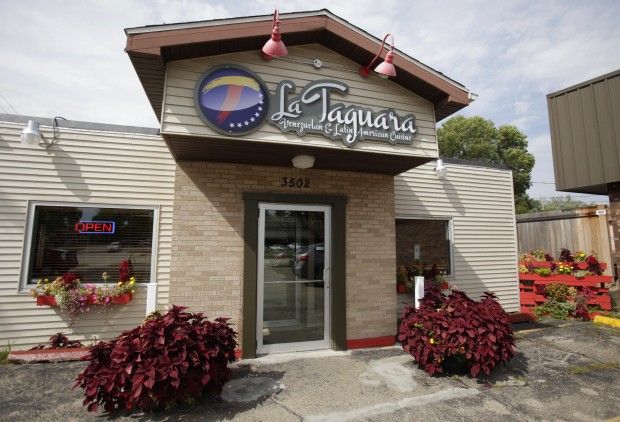 Jeykell Badell opened Venezuelan restaurant La Taguara in 2013 on the east side. He will receive the Latino Entrepreneur of the Year award on Saturday from the Latino Chamber of Commerce of Dane County.

Super-energetic and personable Jeykell Badell, 35, who opened the city’s first Venezuelan restaurant Aug. 1, is helping educate visitors about his home country, which sits at the crown of South America.

There’s lots to look at between the tchotchkes and the five banners touting Venezuela’s food, symbols and environment. Two inconspicuous televisions loop a slide show of the country’s attractions.

The arepas, or little round flatbreads that are a staple of the Venezuelan diet, get their own informational banner, which is fitting because they are a revelation. The first one I tried came atop the pabellon ($12.99), the Venezuelan national dish — a full plate with well-seasoned shredded beef, black beans topped with queso blanco, white rice and three slices of fried plantains.

The slightly greasy buns are made of ground white corn and have a crispy exterior and soft underbelly. On another visit, I had one as a sandwich ($4.99), stuffed with a potato-chicken salad made with carrots and peas. The arepas can be filled with almost anything: cheese, ham, shredded chicken, shredded beef, pork, ground beef, black beans or picadillo salad. Plain or as a sandwich, the arepas were delightful.

Slightly less successful was the mojito en coco ($10.99), another traditional Venezuelan dish featuring tilapia cooked with coconut cream and mashed into a baby food-type consistency. The sauce concealed much of the fish’s flavor instead of complementing it.

The plates are large and multi-faceted. Nobody is going to go hungry at La Taguara.

Badell gave us a medium hot sauce and a “crazy” hot sauce, that was so ridiculously hot it immediately had my companion in a coughing fit. But the sauce that I put on everything was the guasacaca. The green sauce was creamy from a touch of avocado with added flavor from cilantro, onion, garlic and green bell peppers. Another revelation.

As for appetizers, the bolitas de queso ($6.99) and the yuca fries ($6.99) were both outstanding. My companion called the former “Venezuelan cheese curds,” yet because the lightly-breaded balls of mild queso fresco were tempered by masa, the same cornmeal as in the arepas, they were less decadent.

The thick, triangular yuca fries were crispier than most potato french fries and surprisingly creamy inside. They were stacked beautifully, and oh so delicious dipped in the guasacaca.

The guasacaca also helped liven up the empanadas ($3.75). These puffy turnovers were different from any others I’ve had, made from the same light, white dough as the arepas instead of a pastry shell. They are deep fried and don’t let you forget it, a bit greasy to the touch.

Badell takes obvious pride in his daily soups which he advertises on La Taguara’s Facebook page. I ordered the lentil ($2.99 for a cup) which had potatoes, onions and bits of red and green bell peppers. It was just short of excellent. Badell said he usually adds ham to it, and that could have made it less monotonous.

The juices, which Badell makes from pulp he brings up from Florida, shouldn’t be overlooked. Both the passion fruit and tamarind juices, served in large glasses, were cold and refreshing. The passion fruit wasn’t icky sweet and didn’t taste artificial; while the tamarind had a certain malt quality.

If it’s a real cold one you’re after, not only does La Taguara serve beer from Venezuela, Badell has offerings from El Salvador, Honduras, Guatemala, Nicaragua and the Dominican Republic.

Customers order at the counter and are given a number card if the restaurant is busy. You either pick up your food at the counter, or it’s brought out to you. There doesn’t seem to be a consistent method.

What is consistent is the excellence of the food and the joy of Badell, who clearly loves running this restaurant and exposing Wisconsinites to his nation’s irresistible cuisine.

“Now I want to go to Venezuela,” my companion remarked as we were halfway through our lunch.

I wasn’t surprised. That is what La Taguara will do to you.

Gluten-free: Many naturally GF items, including empanadas and arepas, both made with cornmeal.

Bottom line: La Taguara will educate you on Venezuelan food, culture and geography and then make you fall in love with it. For vegetarians, many dishes can be made with eggplant standing in for the meat. Extensive kids menu.

This version of the Venezuelan national dish, pabellon a caballo, has a sunny side up egg on top as well as an arepa.

Jeykell Badell opened Venezuelan restaurant La Taguara in 2013 on the east side. He will receive the Latino Entrepreneur of the Year award on Saturday from the Latino Chamber of Commerce of Dane County.