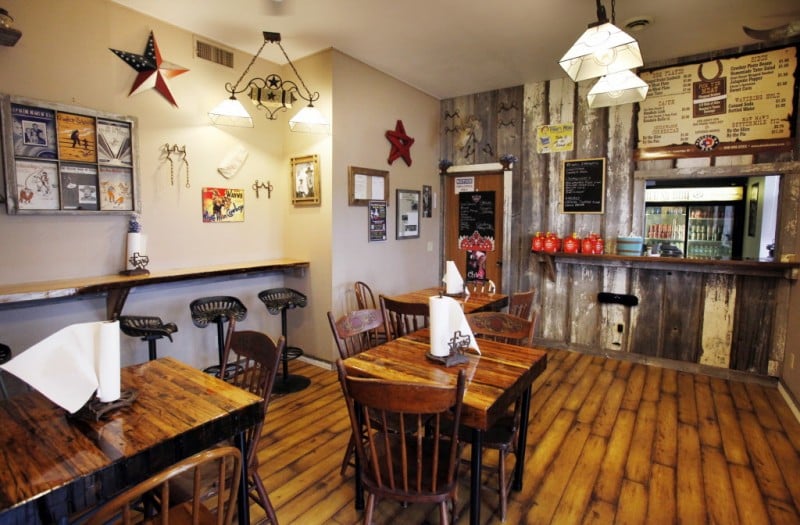 Double S BBQ has a small but playful dining room with three tables for those who want to dine in. 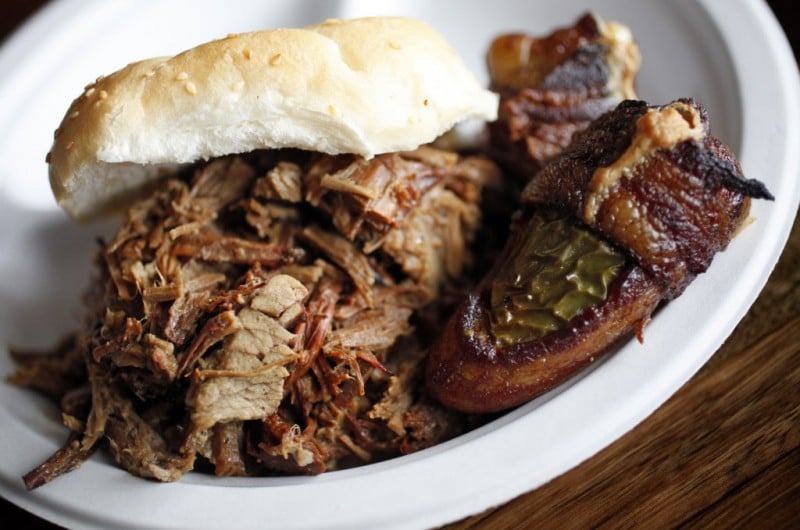 A chopped brisket sandwich shares a plate with a couple of giant, bacon-wrapped smoked jalapeño poppers, which took top honors in the “Best of Taste” early judging for the upcoming Taste of Madison. 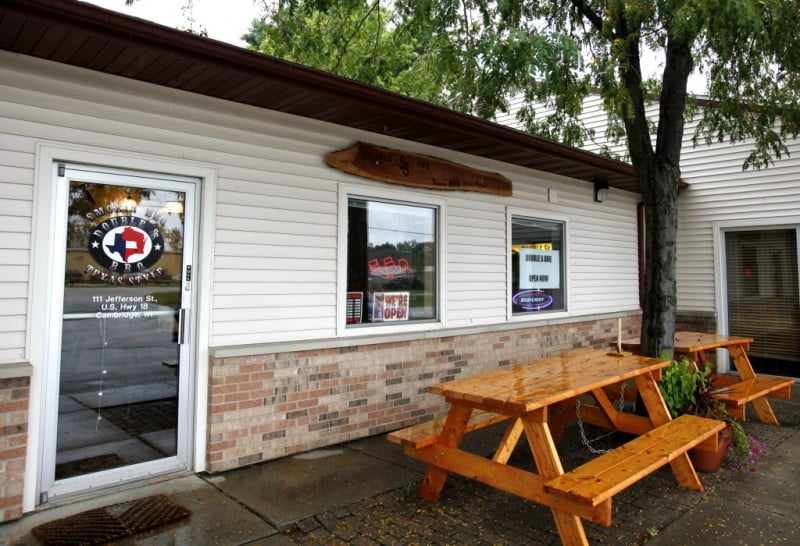 CAMBRIDGE — At the East Side neighborhood festival La Fete de Marquette last month, I eschewed my usual curry squash from Lao Laan-Xang in favor of a chopped brisket sandwich from the Double S BBQ stand.

How could I not? A trusted friend and barbecue aficionado told me he had eaten six of the sandwiches from the Cambridge restaurant over the first three days of the festival and was eyeing a seventh. Now, that’s one powerful endorsement.

A purist, he said he ate his without barbecue sauce because it didn’t need any. The smoked meat was that flavorful. I tried mine without sauce and only got three or four bites in. I had to return to the stand for sauce and found it to be perhaps the best barbecue sauce I’ve ever had.

The sandwich itself was fine, but I failed to see why my friend was hog wild over it.

Then, at a Taste of Madison judging event two weeks later, there was Double S with its chopped brisket sandwich and its giant bacon-wrapped smoked jalapeño poppers. Well, those poppers were phenomenally good. Those alone made me take a drive to Cambridge, to the source.

The cute, three-table spot sits in an unassuming little strip in this town 20 miles east of Madison. Customers order at a window and credit card users sign an iPad with their finger.

Cowboy duds line the wall, and in the corner sits a cardboard cutout of John Wayne. A 2011 Taste of Madison “Best of Taste” first-place award for its smoked beef brisket sandwich has a prominent place on the wall.

The night we were in, owner/chef/Texan Shon Jones — who owns the business with his wife, Sarah (the other “S” in the “Double S”) — came out of the kitchen and talked to us about the Wisconsin heat. “Might as well have stayed in Texas,” he said on this particularly sticky night.

It was the same day he found out that his poppers had won a first-place prize in the early judging for this year’s Taste event (to be held Labor Day weekend). His Maw Maw’s buttermilk pie took second in the homestyle dessert category. But he seemed disappointed that his brisket sandwich didn’t place this year.

The couple opened the Cambridge location May 26 after Shon, a former steelworker, got laid off from a job in Wisconsin in 2010, and after having success with his barbecue at various events.

On a recent weeknight visit, the poppers ($1.50 each) were my favorite thing. A companion found them too greasy, but what do you expect from bacon? It’s the bacon that takes these poppers to a whole new level. The best part is that they are smoked on the pit and not breaded and deep-fried.

A plate of chopped brisket (part of a two-meat plate, $9) was excellent, but again, needed sauce, which I later found out from Jones is an old family recipe. The long, 1/3 slab of ribs that came with it was perfectly smoked, and the meat, which had some excess fat, was falling off the bone.

Another highlight was Beasley’s Texas sausage ($7 as a one-meat plate), a super-long piece of sausage that looked burnt, but actually had a delicious crispy skin with some snap to it. Inside, it was juicy and spicy. I can see why Jones imports it from Buna, Texas, where he lived for 17 years before moving to Wisconsin.

The Boudain balls ($2.50 for four) were deep-fried morsels of rice, vegetables and a mystery meat, later identified as pork. They’re a fun appetizer with an interesting texture and are unique to Southeast Texas, Jones said.

There’s only one dessert, and the Taste of Madison judges had it right: It’s a winner. Maw Maw’s buttermilk pie ($2.75 a slice) is different from any pie you’ve ever had and curiously good, filled with a firm custard that wasn’t icky sweet.

“I gotta say, I kinda like the ambience,” my companion said, looking around the small room. He also had it right. What’s more, the food is reasonably priced and comes out fast.

We were the only ones dining on a Wednesday, but a number of others stopped in for take-out. As good as those poppers are, my companion and I agreed that we probably wouldn’t make a return trip to Cambridge for Double S, but we might seek it out at Taste of Madison and other festivals.

Or pay it a visit after a day at Lake Ripley.

Hours: Noon to 7 p.m. Sunday, Wednesday and Thursday; noon to 7:30 p.m. Friday and Saturday; closed on Monday and Tuesday.

Restaurant review: The Kollege Klub, where kollegians have been kongregating since 1953

One of the city's most popular college bars serves up decent bar food, but is more of a drinking establishment.

Is your cat a psychopath? This test might tell you

Double S BBQ has a small but playful dining room with three tables for those who want to dine in.

A chopped brisket sandwich shares a plate with a couple of giant, bacon-wrapped smoked jalapeño poppers, which took top honors in the “Best of Taste” early judging for the upcoming Taste of Madison.