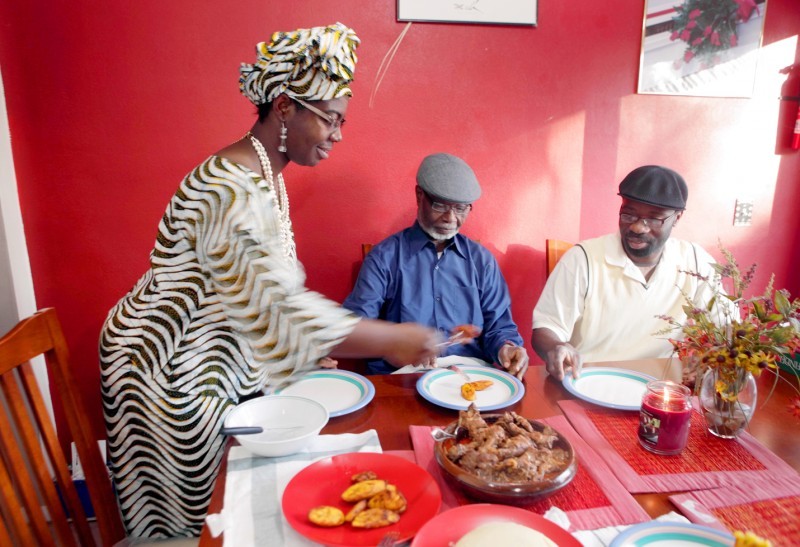 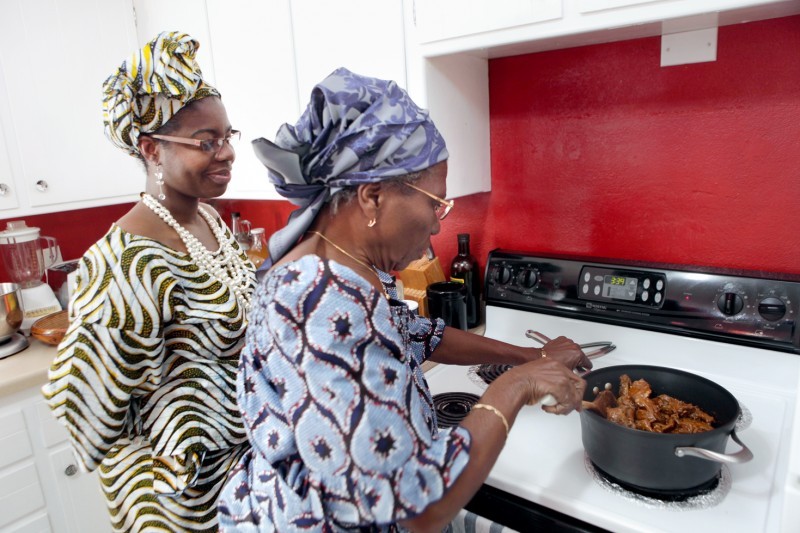 Mercy Amuzu-Gassou, right, of Togo, with Deborah Edoh in kitchen while making a dish made with chicken. 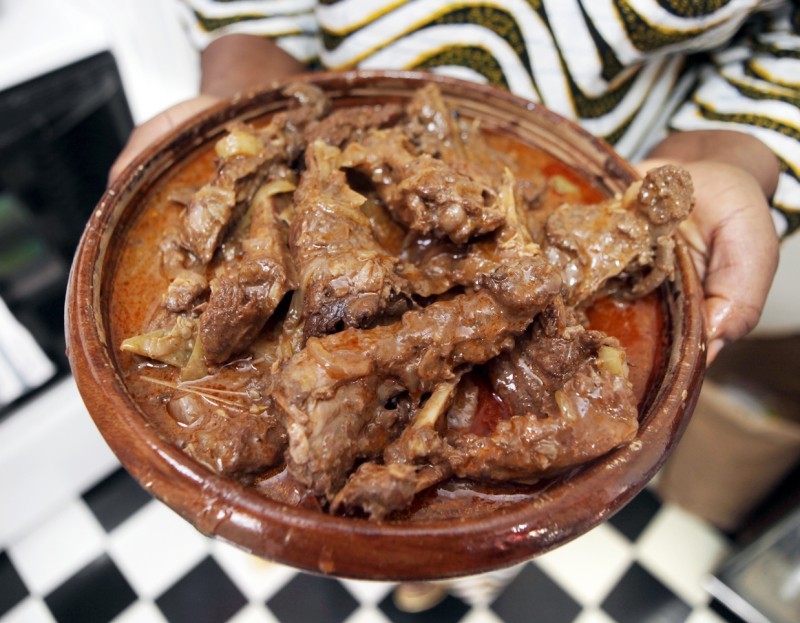 Chicken in spicy peanut sauce is a traditional dish in Togo. 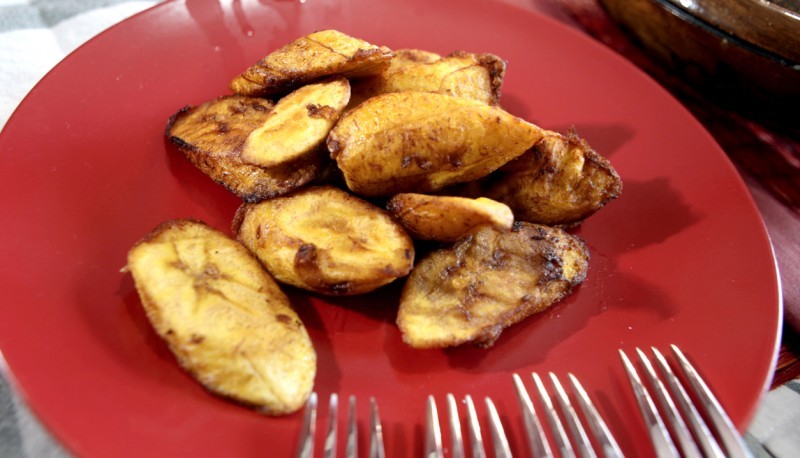 Fried plantain is a popular snack in Togo. 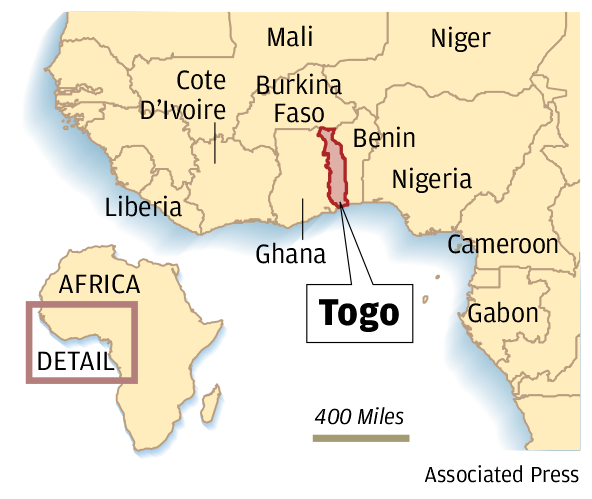 Togo, unlike much of sub-Saharan Africa, is a place where food is bountiful.

Its mild tropical climate allows agriculture to flourish. Its diverse population, which includes 40 indigenous ethnic groups, along with influences from Germany and France, have also contributed to the tiny nation’s interesting cuisine.

Togo’s traditional food was among the things that Koffi Amuzu-Gassou missed after he moved to Wisconsin eight years ago. And because boys in Togo aren’t to cook unless there are no sisters in the family (he has one sister), he couldn’t cook his favorites for himself.

That changed recently when his mother emigrated to Madison, following Koffi’s girlfriend, Deborah Edoh, and his brother and sister. The family joins Madison’s Togolese community, which now includes about 100 people.

Mercy Amuzu-Gassou, 70, is now teaching her son and Deborah the secrets of Togolese cuisine. Their modern kitchen, with its rice cooker and microwave, is a far cry from the “charbon de bois” — a cooking vessel that is set on a hollow log filled with hot coals — that Mercy used for cooking in her rural village.

On a recent afternoon, when her husband, Michel, was visiting from Togo, Mercy was showing Koffi, 35, and Deborah, 36, how to make one of the most beloved Togolese dishes, chicken in spicy peanut sauce, which calls for ginger, jalapeno peppers, cloves, basil and onion and free-range chickens, like those found in Togo, because they are leaner and more flavorful than most commercially raised chickens. Leaner chickens require longer cooking times, which further develops the flavors of the dish.

The menu that day also included fried plantain (which can also be boiled, baked, sprinkled with salt or sugar, or eaten raw if it’s ripe enough), rice, fufu (a bread-like paste that’s usually made from mashed boiled yams, cassava root or plantain — though on this day Mercy took a shortcut and used mashed-potato flakes), and pate, a cornmeal mush cake that is eaten throughout the day in Togolese homes.

Put the above ingredients in a pot and cook on medium until the chicken is tender. Then remove the chicken and fry it in 2 cups oil until lightly browned. Put the fried chicken in a clean cooking pan with:

Sauté until the onion is lightly browned. Then remove the onion and chicken from the frying pan set aside.

Into the frying pan put:

Simmer the tomato paste in the oil, stirring constantly for 5 minutes

Then add to the frying pan:

Boil for 5 minutes. Then add:

Stir until smooth and cook on medium heat for another 10 minutes.

Return the fried chicken to the pan and boil another 5 minutes, then add:

Add salt to taste and boil another 2 to 3 minutes.

Garnish with sliced tomato, jalapeno or onion, if desired.

In traditional African cuisine, any tuber used to make fufu is peeled, boiled and beaten smooth with a mortar. In other settings, starchy powders like potato flakes, cassava or yam flour are used.

Salt and pepper to taste

Bring the water to a boil in a large pot. If you are using cream of wheat, add it to the boiling water and stir into a thick paste.

Add the butter and potato flakes, stirring continuously until it’s the texture you prefer.

Add salt and pepper and continue to stir until it’s a smooth dough. Roll it into balls and serve with the main course.

In Kenya and Tanzania it’s called ugali, and different names are used in other sub-Saharan countries.

Bring the water and salt to a boil in a heavy-bottomed pan. Stir in the cornmeal slowly, letting it fall through your fingers. Reduce heat to medium and continue stirring until the mush pulls away from the sides of the pot and becomes very thick.

Put pate in a serving bowl, to accompany meat, vegetable stews or greens.

To eat, pull a small ball of mush off with your fingers. Dent it with your thumb and use it to scoop up the stews and other dishes.

“The customers will tell us what they want and we’ll just listen to them,” said James Montgomery of a cafe coming to 414 S. Baldwin St.

Curbside review: One of Madison's best new restaurants is on wheels

The food sold from this refurbished bus on the East Side takes the MELTED sandwiches we all know and love and greatly expands on them.

'Community over competition': One pizzeria helps another after Sun Prairie crash

When a car crashed into Anna’s Pizzeria in Sun Prairie Saturday morning, it brought back memories for Patrick DePula of the explosion that rocked the center of the town in the summer 2018 after a gas leak.

'Huge cultural loss' if restaurants don't recover, but help appears to be on the way

Madison restaurateurs are encouraged by $25 billion for restaurants in the $1.9 trillion COVID-19 package moving through Congress.

Nani Restaurant can be found on every single food delivery platform as owner Justin Zhi Jiang waits for the pandemic to be over.

Beer Baron: A Wisconsin-bred Belgian duo worth shipping across the Atlantic

Poll: Are you comfortable dining inside a restaurant?

The Cap Times wants to know how comfortable readers are with dining inside.

CT Kitchen: Sushi bake is the hot dish of your dreams

This week, make a dinner party dish for yourself, your partner or your immediate family. Do the extra steps. Make all the banchan for the bo ssam! Go all out.

Quimbaya Coffee captures the aromas of a Colombian childhood

Based in Madison, Quimbaya specializes in single-origin Arabica coffee sourced sustainably from micro-lots in Colombia.

Who is Amy Coney Barrett?

Don Lemon: The GOP fake outrage machine is in motion

Don Lemon: The GOP fake outrage machine is in motion

Rep. Sarbanes: Failure to pass HR 1 'would split our democracy in two'

Rep. Sarbanes: Failure to pass HR 1 'would split our democracy in two'

Mercy Amuzu-Gassou, right, of Togo, with Deborah Edoh in kitchen while making a dish made with chicken.

Chicken in spicy peanut sauce is a traditional dish in Togo.

Fried plantain is a popular snack in Togo.