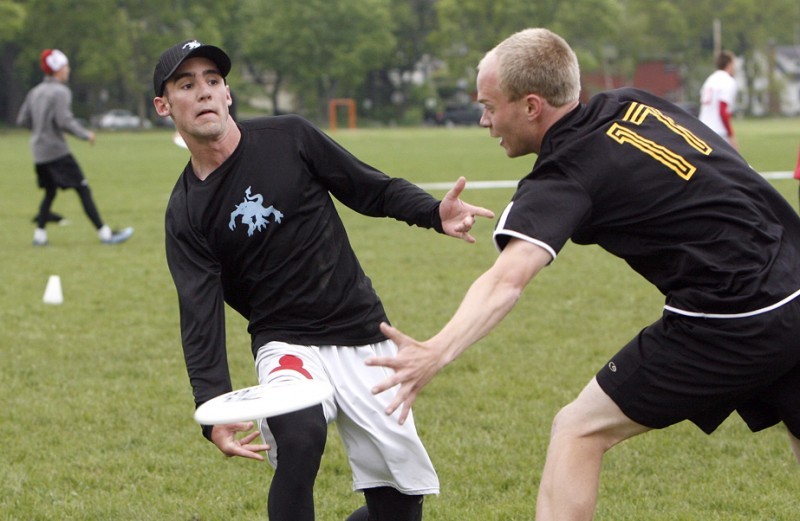 John Bergen passes the disc around defender Jacob Meyer during a practice of the UW-Madison club Ultimate team at University Bay fields. On Bergen’s shirt is the team logo for the Hodags, one of the country’s top-ranked Ultimate teams and a favorite in the Ultimate Players Association College Championships, which are coming to the Madison area Friday through Monday, May 31. 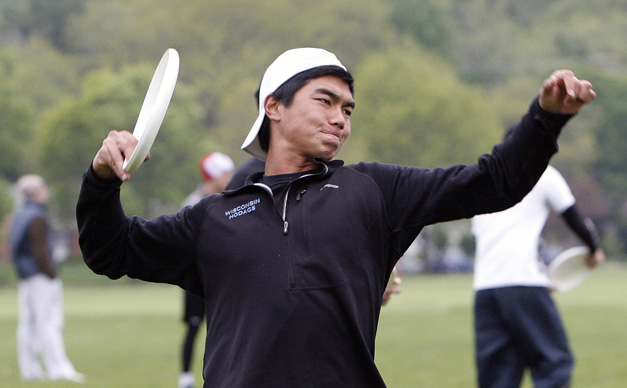 Dan Park throws the disc during the Hodags' practice. "What makes (Ultimate) the most fun to watch is that it requires a really high level of fitness," said Kate Arnold, a Madison player and director of the College Championships. 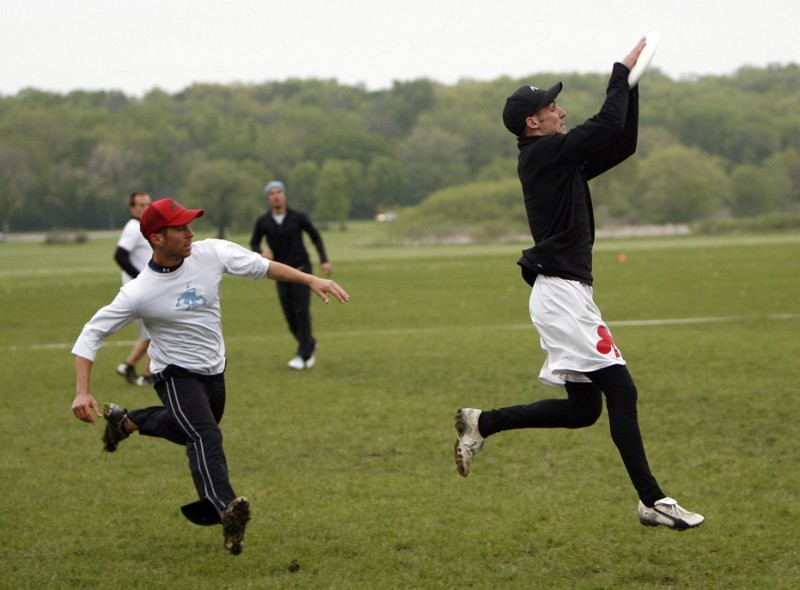 John Bergen, right, leaps to catch the disc as Jon Masler defends during the Hodags’ Ultimate practice.
By ANDREA ZANI | | 608-252-6191

This sport is the Ultimate - really - and its national college championships are coming to Madison on Memorial Day weekend.

Backyard Frisbee has got nothing on the Ultimate Players Association College Championships, set for Friday through next Monday, May 31, at Reddan Soccer Park in Verona and at Middleton's Breitenbach Stadium.

"For people who don't know a lot about it, they might confuse it with other disc sports," said Kate Arnold of Madison, an Ultimate player and tournament director for the UPA College Championships. "Athletically, it's really on par with soccer or basketball or other competitive sports."

For those unfamiliar with the sport, here's a quick Ultimate tutorial: Two teams of seven players each compete by throwing and catching a disc on a 40-yard-by-70-yard field, with points scored when one team catches the disc in the other's end zone. Games are played to 15, usually wrapping up in about two hours.

Passes are permitted in any direction; once a pass is caught, there is no running with the disc; it must be thrown within 10 seconds. If a disc is dropped, the other team takes over on offense.

"The most challenging aspect and what makes it the most fun to watch is that it requires a really high level of fitness," Arnold said. "There's no stoppage of play, so teams are switching between offense and defense quickly. The idea is that you could continually sprint. You're constantly in motion. That's what makes it a great spectator sport."

Fans who come out for the UPA College Championships are sure to see the highest level of Ultimate anywhere, said Matt Young, captain of the UW-Madison club Ultimate team, the Hodags. A perennial power and winner of three recent UPA college titles (2003, 2007 and 2008), the Hodags join a field that features 20 men's and 20 women's teams that qualified in regional play.

"We expect to face a very strong University of Minnesota team; our longtime rivals, Carleton College; and a host of other solid teams," Young said.

The Hodags - who train year-round, including at UW's McClain Center in winter - are in the top five in both national computer rankings for Ultimate and in a captains and coaches poll. Young credits the team's sustained success to the "holistic approach" taken by the program, with increased recruiting and organized tryouts, offseason track workouts for conditioning and more attention to game strategies.

"The surge started in the late '90s and early 2000s with some very dedicated individuals that set out to take Wisconsin Ultimate to the next level," said Young, 27, a native of West Allis, who is in his fourth year of medical school at UW and his third year on the Hodags. "All of the knowledge was passed down from year to year."

The addition this season of a team coach, former Hodags player Hector Valdivia, has helped to keep the Hodags as competitive as ever, Young added.

"We believe we've improved significantly during the last two months and have a very good shot at winning the tournament," he said.

The UW women's club Ultimate team, Bella Donna, will be in the women's tournament field this weekend. And Young said he expects great support for both teams from local fans.

"The home-field support we will have for this event could be like none Ultimate has seen before," he said.

About 2,000 people participate on more than 100 teams in a summer league, and leagues also play in spring and fall. That Ultimate popularity can largely be credited to one organization: Madison Ultimate Frisbee Association.

MUFA was started in 1993, to serve as host for the Ultimate World Championships taking place in Madison that year. It has since grown to oversee numerous recreational leagues, help facilitate Ultimate teams at local high schools and introduce it as an option for physical education teachers.

In general, MUFA has raised the profile of the sport, said board member and youth chairman Pete Schramm.

"Madison fits as a Frisbee town," Schramm said. "It's one of the great Ultimate towns in the United States."

Participation in MUFA leagues has been growing "at a 5 to 10 percent clip every year," Schramm said, to the point where Ultimate has to battle for field space at local parks, mostly with soccer.

Schramm, 28, who has played in MUFA leagues since 2001, said it is Ultimate's accessibility that helps to make it so popular. Many people who are athletic and have excelled in other sports see Ultimate as a way to keep competing.

"It's easy to try," he said. "You can learn the 10 basic rules and be competent at the sport."

Players also learn one of the aspects that makes Ultimate different from other sports: self-officiating. Participants are expected to call their own fouls and, in general, play by the rules. It's an idea that works well for the most part, he said, adding that it stresses "fair play and sportsmanship."

"It's part of the beauty of the sport."

Mastering different throws is probably the biggest challenge for new players, Schramm said, and then there's learning how to "read" passes of the disc, knowing where to run to catch a disc while it's in the air. Also, all the best teams play using "stacks," or different types of offenses.

Hosting the national college Ultimate tournament - something Madison last did in 1991 - is a coup for MUFA, said Arnold, 30, who won a national title while playing for Stanford in 1999. MUFA worked with the Greater Madison Convention and Visitors Bureau to secure the event, a big boost for Madison's thriving Ultimate scene.

That point is illustrated by Martha Sumi, who might be described as the ultimate Ultimate mom.

Her daughter, 2006 West High School graduate Emily Luck, played soccer while growing up in Madison, then discovered Ultimate at Washington University in St. Louis. When Luck's team qualified for nationals, Sumi agreed to host the entire group - about 25 young women - during their stay this week in Madison.

"Maybe all of them, not sure yet," Sumi said of how many players she will accommodate at her home. "My sister may take some. ... (Emily) is thrilled that the tournament is at Reddan this year - where she played many, many soccer games. She is also planning to show her team around Madison, including Brat Fest.

"There are a lot of Ultimate fans in Madison. We're so lucky to have the nationals here!"

The UW women's ultimate frisbee team pulled out a pair of wins Saturday afternoon to secure a place in Sunday's national quarterfinals.

John Bergen passes the disc around defender Jacob Meyer during a practice of the UW-Madison club Ultimate team at University Bay fields. On Bergen’s shirt is the team logo for the Hodags, one of the country’s top-ranked Ultimate teams and a favorite in the Ultimate Players Association College Championships, which are coming to the Madison area Friday through Monday, May 31.

Dan Park throws the disc during the Hodags' practice. "What makes (Ultimate) the most fun to watch is that it requires a really high level of fitness," said Kate Arnold, a Madison player and director of the College Championships.