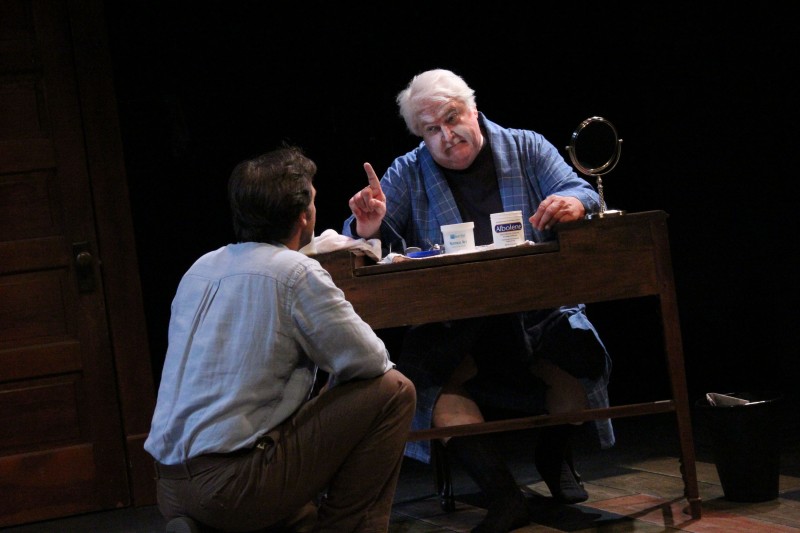 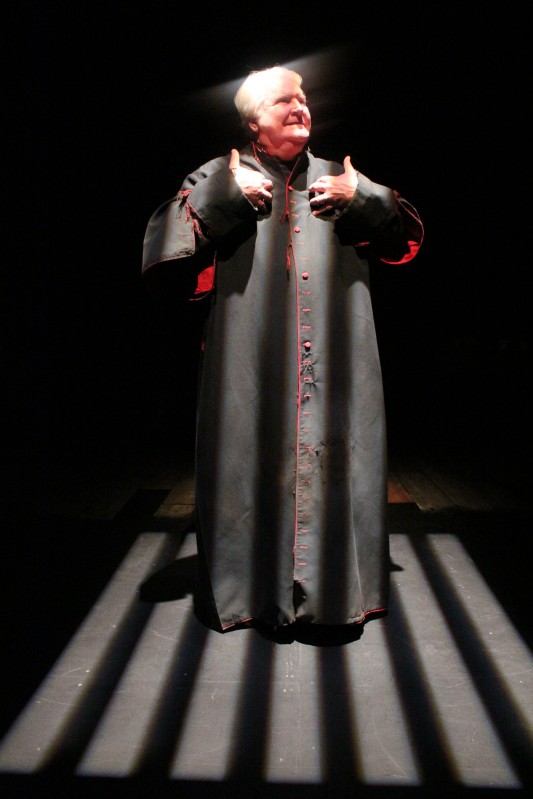 In “Exits and Entrances,” Kenneth Albers recites lines from “The Prisoner,” a play about a persecuted cardinal.

SPRING GREEN - The stage is completely dark save downstage center, where long bars of light and shadow create a tight cage.

In it stands the great South African actor André Huguenet, in costume as a persecuted cardinal. He is giving confession, and we, the audience, are to give him absolution.

"I never had a heart," he cries. "The only prayer I ever truly prayed was ‘Lord I believe - help Thou my unbelief!'"

Athol Fugard's "Exits and Entrances" is full of both heart and belief, with a faith, not in God, but in the ability of the theater to transform. Consisting of just two conversations between a playwright and an actor over a swift 90 minutes, "Exits" tells the story of two lives in the theater using the language of the stage itself.

American Players Theatre presents Fugard's 2004 drama in the indoor Touchstone Theatre, where the intimacy of the space perfectly fits the piece. "Exits and Entrances" is one of a series of autobiographical plays Fugard wrote about his development as an artist ("Master Harold ... and the Boys" is the best known).

Reading the play feels a bit like reading a term paper; Fugard quotes liberally from Shakespeare and Sophocles and James Elroy Flecker. Onstage, though, Kate Buckley's sensitive direction turns the work into something at once personal and performative, a private relationship anchored by the theater.

David Daniel plays the young (unnamed) playwright and our narrator, aging from 24 to 29 during the course of the play. In other, larger productions staged up the hill at APT, Daniel's sputtering intensity can be off-putting. But here, in the smaller house, he tempers the bluster and brings out the subtle insecurity in his character.

It's clear from the start that the young man worships André, despite the older man's arrogance. Daniel's tone is affectionate, his manner overeager as he hangs on every line from "Oedipus the King."

"You become him," the playwright says, awe in his voice. "How do you do it?"

In a bit of metatheatrical indulgence, a great actor plays a great actor. As André, Kenneth Albers nearly stops the show with his monologue from "The Prisoner" by Bridget Boland. As the high priest brought low by his own pride, this mini-performance is a revelation of both humility and strength.

Throughout "Exits and Entrances," the two men have chemistry. There is life even in the pauses, the gaps when the playwright struggles to understand and André waits for him.

Like the playwright, I was captivated by André during the performance. His reading of Hamlet's famous soliloquy as a question of suicide is heart-wrenching; his description of a Russian ballerina at once dreamlike and tragic.

With such an emphasis on performance, the design details do the primary job of not getting in the way. Holly Payne's costumes are understated and simple, from the shift and drape Albers wears as Oedipus to the playwright's tweed jacket.

Josh Schmidt's sound and Noele Stollmack's lighting combine to create truly frightening moments ("Oedipus" again), and Nathan Stuber's dressing room set seems at once conjured up by the playwright's words and distinctly real, with a door that doesn't want to close.

Set in South Africa but universally significant as a picture of a man and his mentor, "Exits and Entrances" is a portrait in words, fascinating and sad.

What: "Exits and Entrances" by Athol Fugard

In “Exits and Entrances,” Kenneth Albers recites lines from “The Prisoner,” a play about a persecuted cardinal.
© Copyright 2020 Capital Newspapers Inc., madison.com , 1901 Fish Hatchery Rd Madison, WI | Terms of Use | Privacy Policy
Powered by BLOX Content Management System from TownNews.com.
You don't have any notifications.