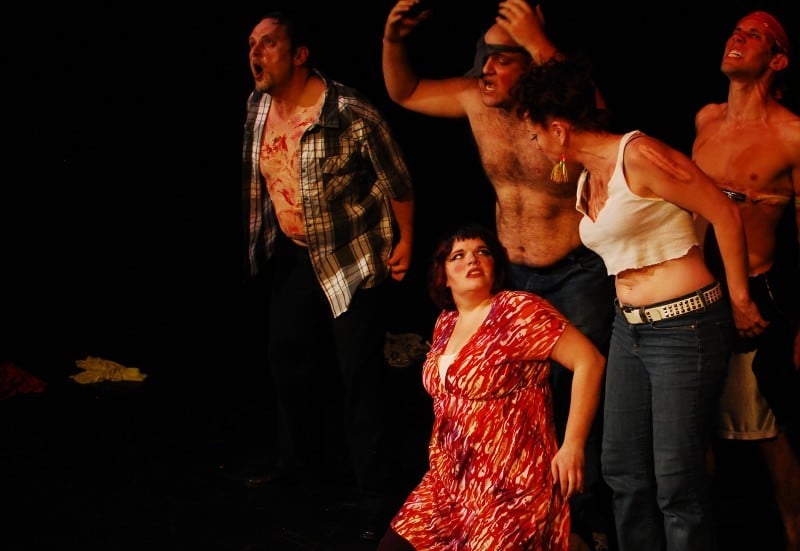 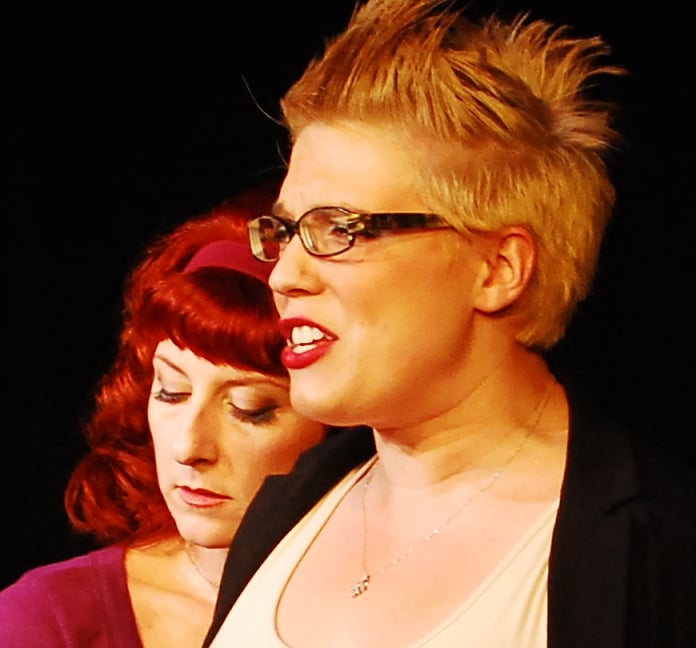 The name change is appropriate. It’s a totally different show.

This weekend, “Love Death Brains” plays four more performances in the Bartell Theatre’s black box Evjue as a lead-in to (and fundraiser for) a trip to the New York International Fringe Festival Aug. 12-18.

Sarah Mucek wrote the story and lyrics. Meghan Rose, of the local band Little Red Wolf, wrote the music. Director Pete Rydberg has had such a strong hand in the show’s evolution, his name is now in the title.

Rydberg’s latest version of the musical is smarter, tighter and altogether brighter than the original. A cast of 20 has been pared down to 13, and the ensemble is more balanced, the story spread among several key characters.

“Love Death Brains” opens with a quartet of conspiracy theorists sniffing around the fringes of a mysteriously guarded community. They bear a striking resemblance to the Mystery, Incorporated team, and they’re determined to see what’s behind the fence.

Dr. Crawford (Alex Brick) and his son, James (Stuart Mott, charming and bewildered), get even closer. They move in to Z-Town so Crawford can work with a local scientist, Dr. Greenblad (Jamie England).

If James can unknowingly accept his slavering zombie classmates as “real people,” their theory goes, the world will have to follow suit.

But while the teen falls for Monica, a pretty young “zee” (the adorable Corianne Wilson, who sells every move), James also quickly guesses that “something is off” with his new neighbors.

The first “Z-Town” pushed the audience toward siding with the zombies, with songs that emphasized how marginalized and misunderstood they were.

It was very dark. Most everyone died.

“Love Death Brains,” by contrast, is solidly a comedy. Jamie England totters and stumbles as the hopeful Dr. Greenblad, with bright red spots on her pale cheeks. She looks like Coppelia in a lab coat.

Jessica Jane Witham capably takes on the (much-reduced) role of the angry young radical, dancing an oddly titillating tango with her “sister” about embracing their “zombie nature.”

Sarah O’Hara vamps it up as the Daphne character in the conspiracy team, and the highly entertaining Matthew Huston cracks double entendres as Monica’s sassy gay friend Zack.

“Des he eat meat?” Zack asks, leering at James. (The zippers holding Zack’s body together are a nice touch from Dawn Marie Svanoe.)

Many of “Z-Town’s” numbers, like the peppy “Flesh-eating Kind of Day,” have been trimmed. And several new tunes, like “Infected with a Virus” and “The Best Experiment” (or similar — there are no titles in the program) are both funny and effective.

But while “A Good Man is Hard to Find” is still a great song, it no longer fits the flow of the show. Others, like “The Match Is Lit,” try to shove too many words into too few phrases. The singing is overall improved, but it’s still a bit uneven.

As a musical comedy, “Love Death Brains” is goofy, fast-paced and very funny. It’s not revolutionary or terribly ambitious. But it’s a very good time, and it (still!) has a ton of heart.

Hey, New York City: The cheeseheads are coming, and they’re after your brains.

Tweed proving itself as a sustainable fabric in high demand

Tweed proving itself as a sustainable fabric in high demand