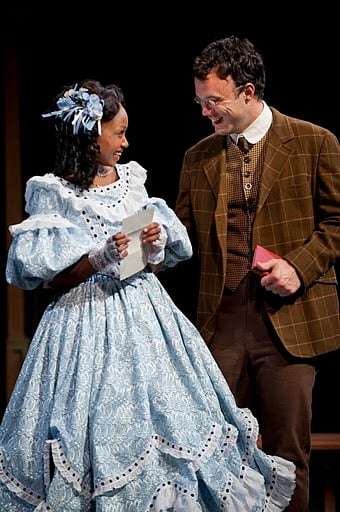 Ashleigh LaThrop and Eric Parks play Bianca and her suitor, Lucentio, in American Players' "The Taming of the Shrew."
LINDSAY CHRISTIANS | The Capital Times |

Much has been made, over the last few centuries, of William Shakespeare's words.

But in Tim Ocel's production of "The Taming of the Shrew" at American Players Theatre, the subtext tells the story.

"She is my goods ... my house, my household stuff," says James Ridge as Petruchio, speaking softly, inches from his new wife's frightened face.

What he's saying, to Kate and Kate alone, is: We're married now. You're coming with me.

In Ocel's remarkably violent staging of "Shrew," running through Sept. 30, Ridge and Tracy Michelle Arnold toss dishes and brandish weapons for most of five acts. A business contract transforms into a love match by play's end in this less-than-funny comedy about fire fighting fire.

Arnold, with her thousand-mile stare and clenched-fist physicality, is a fine Katherina, a frustrated woman whose marriage precludes that of her younger, more desirable sister. As if to spite her sister, Bianca (Ashleigh LaThrop) whimpers and whines, batting her eyelashes at potential suitors beneath piles of bows and ribbons.

The central conflict between Petruchio and Kate is a dynamic one. Arnold prowls the stage like a caged cat; Ridge struts like a cock. But the underlying current remains serious.

In this telling, Petruchio sees Kate as a worthy partner, so he shares the torture he inflicts by denying them both sleep, food and clothing. By his irascible temper, Petruchio forces Kate to be the calmer, more forgiving partner. And when Kate finally capitulates, it's out of pity for him as well as self-preservation.

APT deploys several strong company members in small roles, which bolster the play's appeal when simpering Bianca is left to her several suitors. John Pribyl is an exasperated Baptista, likeable despite his favor toward his younger child.

Scenes like the negotiation of a dowry for Bianca in which the highest bidder wins may be tough to stage. But Gremio (Jonathan Smoots, blustering) and Tranio in disguise (Matt Schwader) make them almost fun.

Schwader goofs his way through pretending to be his own master (Lucentio, played quietly by Eric Parks). He shrugs and struts and widens his eyes like a cartoon character.

Throughout the play, Joe Cerqua's enchanting tango music tuns Kate and Petruchio's "romance" into an elaborate, high-stakes dance. B. Modern's costumes make subtle commentary on the wearer. Petruchio enters in an Indiana Jones-cum-sailor outfit and gets married in a diamond-patterned Harlequin costume — he's both an adventurer and a trickster.

Ocel's directorial notes (which include, evasively, a lengthy description of the rodent shrew) quote Germaine Greer's "The Female Eunuch." Greer suggests that "the submission of a woman like Kate is genuine and exciting because she has something to lay down, her virgin pride and individuality."

But the question remains: does this "shrew" still need taming?

"Shrew" is one of Shakespeare's better-known plays, thanks to the Richard Burton/Elizabeth Taylor film, Cole Porter's musical and "10 Things I Hate About You." For better or for worse, "Taming" sells tickets.

And art so rooted in a stifling, patriarchal society could shed light on why women's personal health choices are national policy issues, and why many churches won't ordain them or allow them to teach.

These ideas loom in our history. But it's a stretch to say that producing "Shrew" is the best way to address them, when contemporary classics from Caryl Churchill and Wendy Wasserstein tell a more nuanced story.

"The Taming of the Shrew" is a comedy that isn't funny, an un-romantic romance about power and force of will and physically defending one's body and mind. Even the finest company of actors cannot fully redeem a story so rooted in the male prerogative to capture, conquer and subdue.

What: "The Taming of the Shrew"

Movies in a Minute: "The Little Things"

Movies in a Minute: "The Little Things"