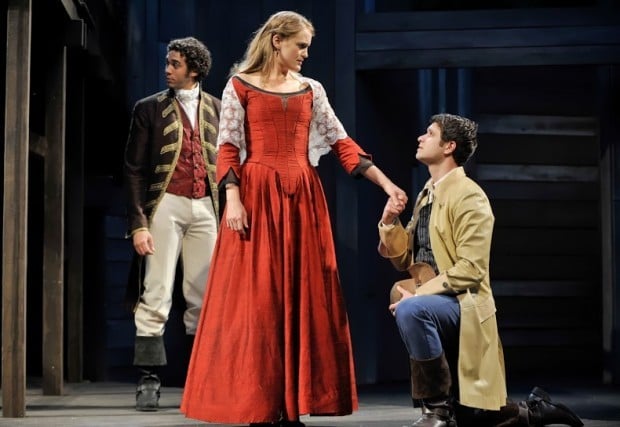 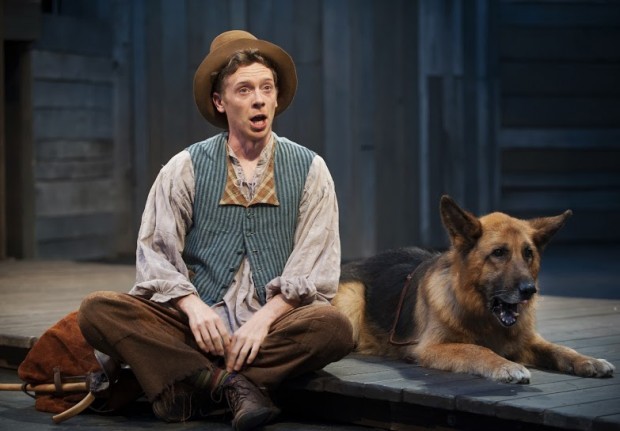 The servant Launce (Steve Haggard) may be the only true gentlemen in "Two Gentlemen of Verona," shown here with his dog, Crab (played by Tim, an 11-year-old German Shepherd). 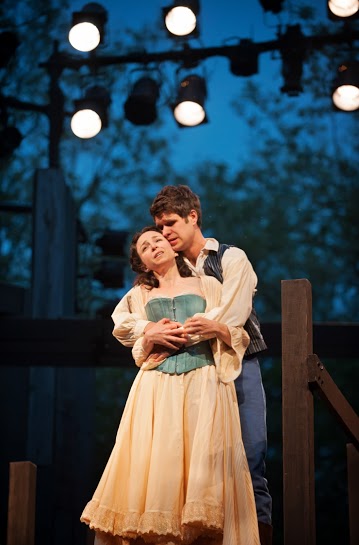 SPRING GREEN — Because "The Two Gentlemen of Verona" ends with a double wedding (just like — spoiler alert? — "Much Ado About Nothing" and "A Midsummer Night's Dream"), I suppose one could consider it a comedy.

Certainly, Shakespeare uses many of his favorite romantic comedy tropes in "Two Gents," the first play to debut up the hill at American Players Theatre, running in repertory through Oct. 6.

Proteus, like a lovesick Romeo, forgets his former love when he meets a new girl. Men sing sonnets and play guitar to a woman on a balcony; lovers pine in exile. A young woman pretends to be a page boy to get close to the man she loves (as in last season's "Twelfth Night").

But through the lens of director Tim Ocel's intelligent staging at APT, "Two Gentlemen of Verona" feels more like a romantic drama than a comedy.

Only one lucky character seems truly happy with his happy ending. Everyone else, except perhaps Steve Haggard's goofy servant Launce and his dog Crab (played by a patient German Shepherd named Tim), faces a far more compromised future.

Ambiguity, moral and otherwise, in Ocel's production make "Two Gentlemen" more intriguing than it might be as a light-hearted exploration of fickle young love.

At the play's start, Proteus (Marcus Truschinski, in his first role as an official company member) and Valentine (Travis A. Knight) are as close as brothers, Verona's Riff and Tony.

Valentine rails against romance, so we know immediately that he's bound to fall in love by the next scene. When Valentine goes to Milan, that love takes the form of Silvia (Abbey Siegworth), the proud daughter of the Duke.

But no sooner does Proteus — himself already betrothed to a Verona girl, Julia (Susan Shunk) — follow his buddy to Milan than he spots Silvia and decides he wants her for himself. Julia who?

"In love, who respects friend?" Proteus rationalizes. "I to myself am dearer than a friend ... I cannot now prove constant to myself without some treachery used to Valentine."

The innately likable Truschinski makes Proteus seem more misguided and self-centered (like a typical teenager) than truly bad. For his part, Valentine seems naïve, but not stupid. Knight makes both Valentine's haste to forgive his friend and the slowness with which he understands a trick feel like symptoms of lovesickness.

By contrast, the women in "Two Gents" are strong, even by the standards of Shakespearean heroines.

At first, Julia is a bit neurotic. She takes, then rejects Proteus' love note without reading it, takes it again, tears it up, then pieces it back together, kissing each piece. (All of this after musing about Proteus that "he, of all the rest, hath never moved me").

But when her betrothed has been gone too long, Julia disguises herself and goes in search of him, keeping her identity a secret even as she's asked to be a messenger between Proteus and the uninterested Silvia.

Silvia is passed around, wooed by Valentine, "vain" Thurio (Ricco Fajardo, done up in a doublet) and Proteus in turn. But she's loyal to Valentine and, in rejecting Proteus, to Julia, even before she meets her.

In one particularly well-crafted scene, Julia (as a male page) tries to deliver a love letter from Proteus. Siegworth makes it clear that Silvia sees through the disguise and decides to play the game. It's a moment of unspoken complicity between the women that makes them both more interesting to watch.

Finding two true gentlemen in "Two Gentlemen" is harder than it seems. Proteus double-crosses everyone. Valentine is dangerously naïve, placing Silvia at risk moments after he rescues her from an attack. The Duke (James Pickering) changes his mind so quickly, it's like he doesn't think at all.

The most gentlemanly behavior comes from Launce, the servant, to his dog. When the dog has misbehaved, Launce takes the blame.

"If I had not had more wit than he, to take a fault upon me that he did, I think verily he had been hanged for (it)," says Launce.

True, "Two Gentlemen of Verona" ends with a wedding, that happiest of theatrical occasions. But in this case, it may be better to be a dog than a bride.

In repertory through Oct. 6. Running time is two hours and 45 minutes with one intermission.

From Shakespeare to Stoppard, APT tells two stories in the same world

The final two plays in American Players Theatre's season, "All My Sons" and a shortened version of "Antony and Cleopatra," open on Aug. 17.

Cold start to the day in the East and hot, dry conditions in the West

The servant Launce (Steve Haggard) may be the only true gentlemen in "Two Gentlemen of Verona," shown here with his dog, Crab (played by Tim, an 11-year-old German Shepherd).