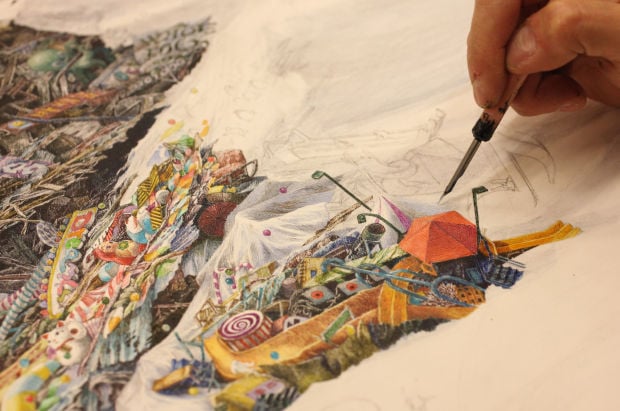 Japanese artist Ikeda Manabu, who is doing a three-year residency at the Chazen Museum of Art, spends every day working in a quiet room on a work that eventually will measure 10 feet wide by 13 feet tall. 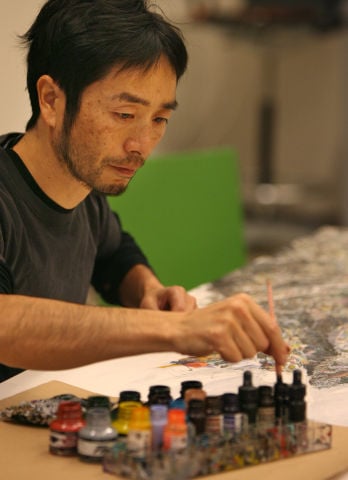 Ikeda Manabu, 40, came to Madison with his wife and daughter this summer, and since has had a second child born here. Visitors to the Chazen Museum of Art this winter will have an opportunity to watch him at work. 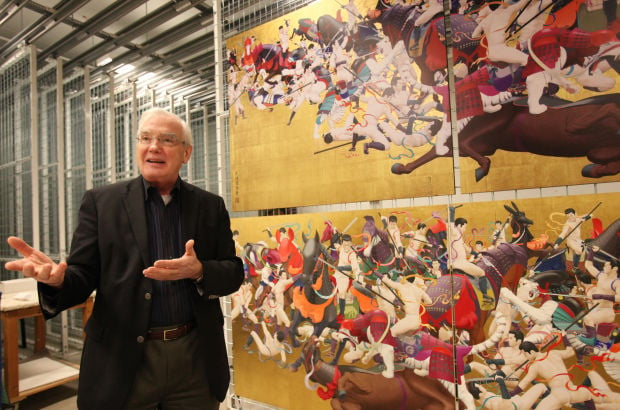 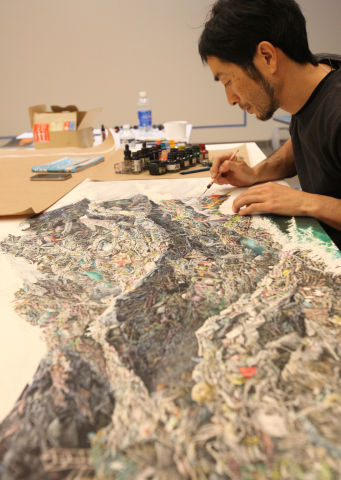 Japanese artist Ikeda Manabu, who is doing a three-year residency at the Chazen Museum of Art, works on a large scale project at the museum. 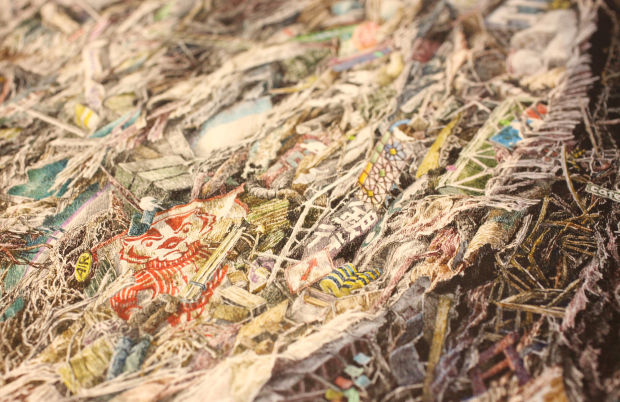 What do three years look like? In 2016, Ikeda Manabu will show you.

Several months into a three-year residency at the Chazen Museum of Art, the acclaimed Japanese artist already has made headway on a massive drawing that has the art world talking. Ikeda creates astonishing, detailed narratives on paper and board using only tiny pen strokes, skill and imagination.

Eight hours a day he comes to a quiet, white-walled room inside the Chazen to work on his latest creation, spread across a vast table. Blue painter’s tape on the wall marks what will be the size of the final artwork: 13 feet wide by 10 feet high.

Those 130 square feet will be covered by Ikeda’s minute, intricate images, all tiny pieces of a colossal whole. Ikeda approaches a work with a concept in mind, but not with a definite plan or design. Each day, fantastically intertwined images emerge.

“Ikeda very much likes that Japanese tradition where you meticulously work it out, doing everything very precisely,” said Chazen director Russell Panczenko. “The master does it by hand; that’s what makes him the master. That’s important to him.”

A number of Ikeda’s works will be featured alongside those of fellow contemporary Japanese artist Tenmyouya Hisashi in an exhibition running Friday to Feb. 16 at the Chazen. Ikeda’s pieces will include “Meltdown,” which he created while living in Vancouver, British Columbia.

“Meltdown,” which took Ikeda six months to create, depicts a glacier sliding down a mountain, taking with it layers of civilization.

“Basically, it’s a pen and ink drawing” made on a special thick paper that’s been hardened to be very smooth, Panzcenko said. “But if you look closely, with all this detail covering the whole surface, there isn’t a pen stroke that is more than an eighth of an inch in length. So — talk about intensity.”

Panczenko became intrigued with Ikeda and Tenmyouya after seeing their work in the 2011 exhibition in New York titled “Bye Bye Kitty!!! Between Heaven and Hell in Contemporary Japanese Art.” Featuring the work of 16 living Japanese artists, “Bye Bye Kitty!!!” was designed to show Americans that contemporary visual art in Japan is not limited to the ubiquitous cartoon image of Hello Kitty.

The New York Times later chose Ikeda’s work “Existence” from that show as one of the top 10 events of the art world in 2011. Panczenko was fascinated, too, and began looking for a way to acquire an Ikeda work.

“The problem is that he works so slowly that everything that he produces gets snapped up so quickly,” Panczenko said. “There are collectors in Japan just waiting. He has no problem selling his work.”

So Panczenko began a conversation with Ikeda’s dealer about having Ikeda come to Madison for a residency to work on a piece for the Chazen. But the work of three years, in the end, could cost more than what the museum could pay. The Chazen opted instead to buy “Meltdown” with $220,000 in gift funds, and has first right of refusal to buy Ikeda’s Madison work.

Ikeda is paying his own way, and the Chazen furnishes work space for him. The public will be allowed to watch him work during hour-long periods later this month and through January.

A sweeping, detailed epic, the several feet of work completed at the Chazen so far include visuals from Ikeda’s time here, such as a depiction of Bucky Badger, a Starbucks logo, a sign for gas at $3.11 a gallon. The piece is a response to the tsunami that struck Japan in 2011.

“My theme is recovery from disaster,” Ikeda explained during a brief break from his work. “When I was in Vancouver in 2011, I saw the earthquake in Japan on TV news and I was very shocked. So I decided to make new work” on the theme of recovery.

After the earthquake Ikeda visited Japan, where he took photos of images that he expects will be part of his Madison work.

The time he has spent in Canada and now in the U.S. has introduced him to North America’s vast landscapes, a stark contrast to the small, populated landscapes of Japan, he said.

“In Vancouver I changed my work. I tried to express air or distance,” he said. “It’s a very big change.”

Life in Madison has been full of newness as well. Ikeda’s wife and 4-year-old daughter came to Wisconsin with him, and another daughter was born here in October.

“It has been a very big change for us,” said Ikeda, who recently turned 40 and writes an online “Madison blog” in Japanese.

“Of course the landscape — and the culture, the food, the baby’s birth at the hospital. Everything has been a new experience. I got a lot of inspiration from this. It’s like my diary. I draw a lot of experiences in my work.”

One of his biggest influences is the great animation film director Hayao Miyazaki, he said. Nature is also a key influence, and Ikeda often depicts its complex interconnection with civilization.

“The shape, color and expression of nature … water, bugs, trees and weather, all those provide me with heart-pumping sensations and questions. They strongly attract me,” Ikeda said in an interview conducted in Japanese earlier this year with Hi-Fructose magazine. “I agree that we benefit a lot from advanced technology, but at the same time, I feel that we are acting contrary to nature, which makes me feel endangered.”

“Just having the ambition and the confidence that ‘I’m going to tackle this, and do this on this scale,’ ” Panczenko said.

“He has this wonderful curiosity about the world that he’s in. For people in the community to watch this over a three-year period, it’s an experience you’ll never have again.”

What: "Ikeda Manabu and Tenmyuoya Hisashi," an exhibition featuring the work of two contemporary Japanese artists

Watch Ikeda Manabu at work: A museum docent will provide background for visitors who want to watch the artist as he works. Studio visits will be held from Dec. 17 through January on Tuesdays and Thursdays from 1:30 to 2:30 p.m.; and Wednesdays and Fridays from 2:30 to 3:30 p.m.

Disney projects an $8 billion increase in its 2022 content budget

Disney projects an $8 billion increase in its 2022 content budget

Japanese artist at Chazen to unveil the effort of three years

Ikeda Manabu remembers where he was exactly three years ago this fall: marking the first pen strokes of a massive work of art he’d create in t…

Gorgeous sunrises and sunsets kick off December across the country

Gorgeous sunrises and sunsets kick off December across the country

Rockefeller Christmas Tree lights up right at the end of AccuPrime

Rockefeller Christmas Tree lights up right at the end of AccuPrime

Japanese artist Ikeda Manabu, who is doing a three-year residency at the Chazen Museum of Art, spends every day working in a quiet room on a work that eventually will measure 10 feet wide by 13 feet tall.

Ikeda Manabu, 40, came to Madison with his wife and daughter this summer, and since has had a second child born here. Visitors to the Chazen Museum of Art this winter will have an opportunity to watch him at work.

Japanese artist Ikeda Manabu, who is doing a three-year residency at the Chazen Museum of Art, works on a large scale project at the museum.