In a mix of mourning and merriment, APT's 'The Seagull' finds balance
0 Comments
Share this
1 of 3 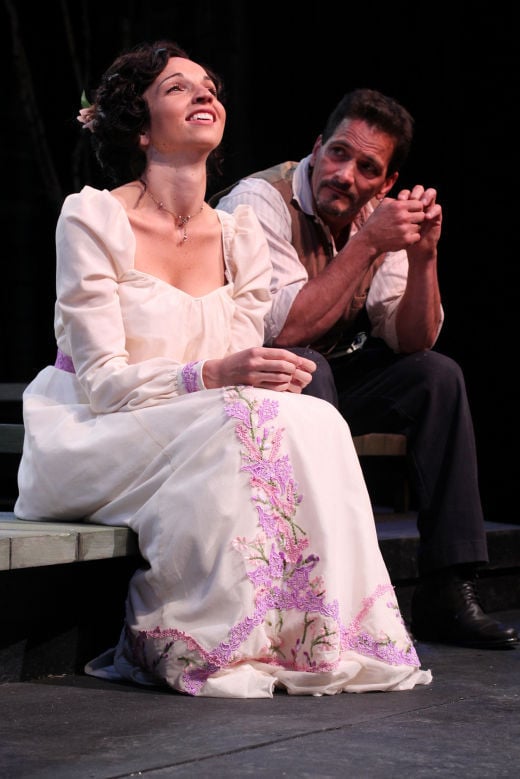 In American Players Theatre's production of "The Seagull," Laura Rook, left, plays a naive country girl whose hunger for fame leaves her open to the manipulations of a self-involved writer (James DeVita, right). 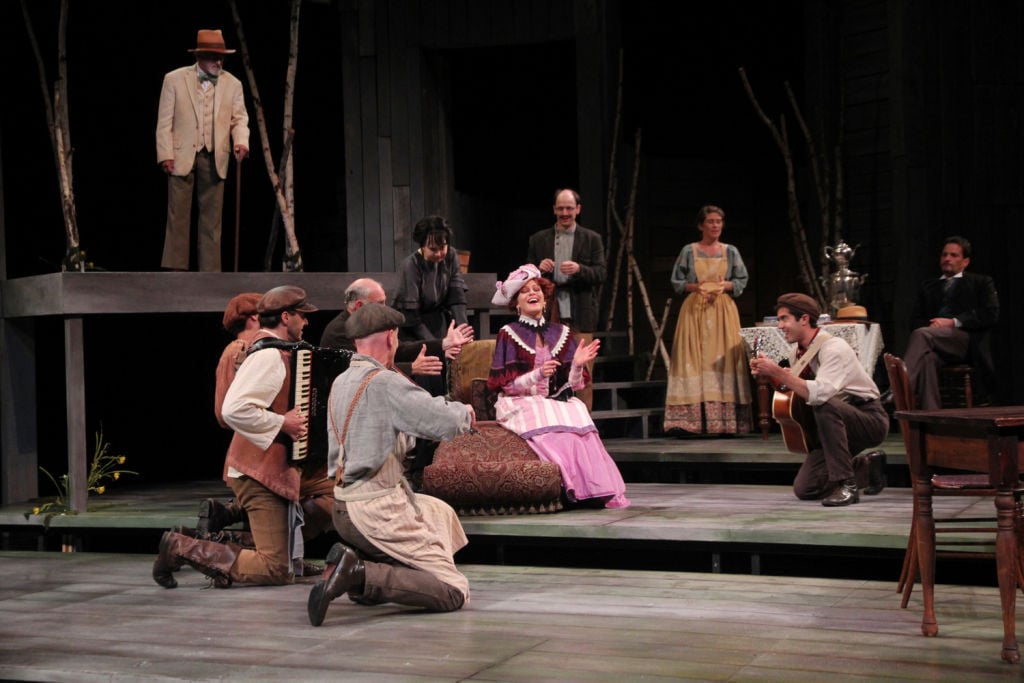 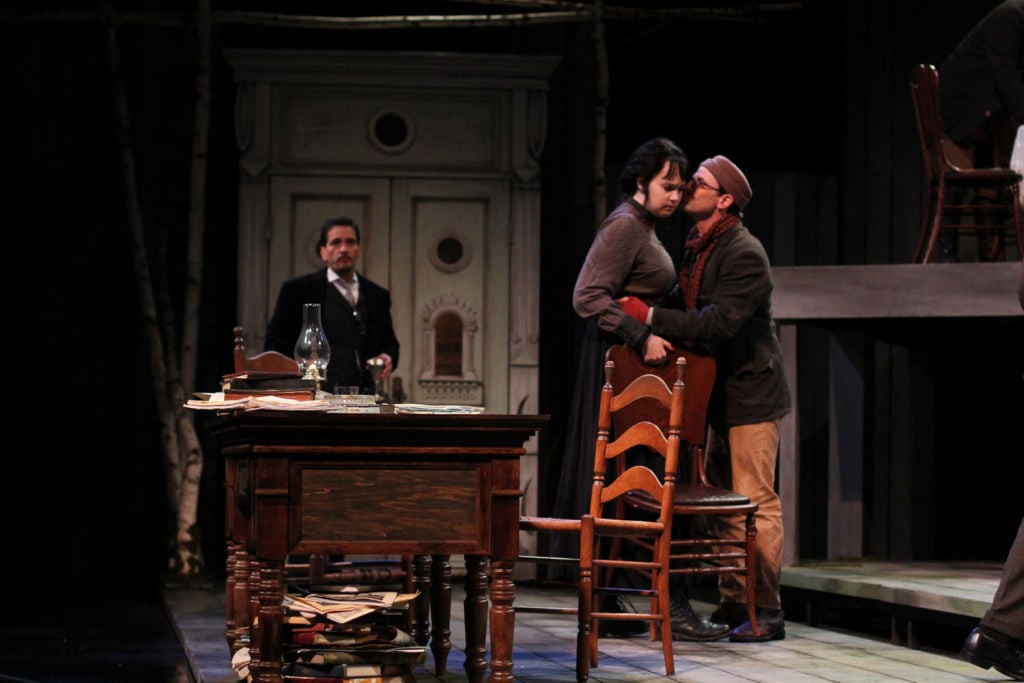 SPRING GREEN — Listening to the lively folk music from a trio of accordion, viola and guitar players up the hill at American Players Theatre at "The Seagull," it would be easy to figure you've got a ticket to a comedy.

Joe Cerqua's merry music, woven throughout the play, feels utterly at odds with the characters' stricken faces. In its cheery revelry, each tune sounds like a promise of what its listeners can't have.

That the soundtrack seems, still, to fit is just one example of the careful balance between dark and light in this fine production, running through Sept. 20 in an easily accessible 1993 translation by Carol Rocamora.

Russian playwright Anton Chekhov insisted, rightly, that his plays should be funny, at least some of the time (if they're not, those three hours can really drag). That's where director John Langs, an APT vet and director of The Seagull Project in Seattle, excels, employing humor like a sharp wind blowing through the muggy air of Chekhov's lakeside estate.

The domestic dramas of "The Seagull" unfold in country drawing rooms and gardens, evoked subtly by designer Nayna Ramey with birch branches, clusters of flowers and a heavily upholstered divan where the actress Irina reclines like a satisfied cat.

But not one of the people reclining on the blankets, sipping vodka and "philosophizing," is truly happy. They are in love with the wrong people. They're convinced they missed out on the life they deserved. Or, worse, they're bored.

Morose, angry Masha (Anne E. Thompson, her face a dour mask) is "in mourning for her life" because the young artist she loves finds her "unbearable." Irritated with the affections of a local schoolteacher (Tim Gittings, tragic in his eagerness), she dotes on Konstantin like a golden retriever.

Konstantin, Irina's neglected son, is all passion and no heart. He's desperate for his mother's attention, for the love of would-be actress, Nina, for attention from the world.

Christopher Sheard plays Konstantin as self-involved, even whiny. He's as passionate as Romeo (whom Sheard also plays this summer) but so hopeless, so pathetic in his need, it's hard to listen to him.

"My mother doesn't love me," Konstantin sulks. "She wants romance and adventure, a whole new life for herself ... and here I am, a constant reminder that she's not so young anymore."

Tracy Michelle Arnold plays Irina in purple velvet and hair as vivid as the Red Queen in "Alice in Wonderland." Holly Payne's costume design contrasts Irina's bold wardrobe with country neutrals, making Irina look like a visitor from another world.

Arnold is marvelous as Irina, a peacock who craves flattery, praising herself if no one else will do it. Mercurial and cold, she stiffens in her son's embrace and keeps the writer, Trigorin (James DeVita), just close enough to satisfy her ego.

The romance between Trigorin and Nina (Laura Rook), the country girl who throws herself at him, feels doomed before it begins. Rook, as Nina, is all wide-eyed hunger — for fame as an actress, but also for a life bigger than the one she's known. Nina may be naïve, but Rook plays her with strength and conviction.

"I shall have fame," Nina says, her face going hard, her eyes focused somewhere far away. "Real, resounding fame!"

DeVita plays the writer Trigorin without affect, casually. At times he seems barely awake, so involved is he in his work. Trigorin doesn't seem to detect his own motives as he draws closer to Nina, moping, "I've never liked myself, and I don't like my own work ... I am a fraud."

Most of the moments in "The Seagull" that lighten the pallor of so much unrequited love come from supporting characters.

James Pickering stomps around the stage as the boorish overseer, while his wife (Colleen Madden) pines shamefully for the unruffled doctor (Jim Ridge).

And Robert Spencer makes an excellent Sorin, Irina's older brother, coughing as he kvetches about the country, his health, his wasted life. It's astonishing how much Sorin seems to age in the two years that pass between the first and second acts.

Langs, in interviews, has said he was drawn to Chekhov because the playwright wrote about real people. Chekhov's characters are miserable, but they're miserable for reasons we understand: loving the wrong guy, an absent parent, fear they made the wrong choices and have no way to make them right.

In Langs' smart, well-balanced production, despair clashes with hope in nearly every scene. Just as no one's life is all joy or all pain, the characters scream, the music plays, and everyone trudges on.

Running time is about two hours and 30 minutes including one intermission.

Anthony Mackie to host the 2021 ESPYs

Running through Nov. 19, August Strindberg’s 1888 drama takes sex and power, manipulation and revenge and cooks them up into a volatile brew.

In American Players Theatre's production of "The Seagull," Laura Rook, left, plays a naive country girl whose hunger for fame leaves her open to the manipulations of a self-involved writer (James DeVita, right).